False idols of the West. Part I. Winston Churchill, racist and hangman of nations 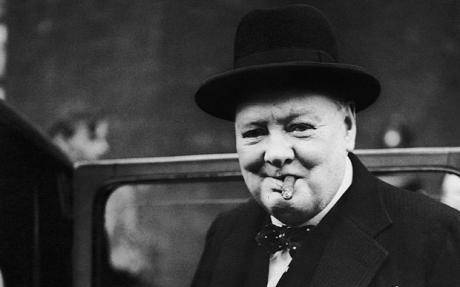 "However," opens a special project "False idols." We would like to present to the reader’s attention genuine portraits of those people who are considered to be indisputable authorities in the USA and Europe, a kind of religious characters who determined the development of civilization. Moreover, we are talking not only about politicians, but also about the philosophers and artists who created the Western cultural matrix.


We begin, however, with a portrait of a statesman - British Prime Minister Winston Churchill, who is certainly one of the most revered figures in the West. Historians call him "the knight of democracy" and "the prophet of freedom and humanism." “A noble spirit, a sense of justice, faith in the human race — that was what guided this great leader of the 20th century in his politics, who triumphed in two world wars,” Churchill's biographer Sir Martin Gilbert notes. Nobody argues, Churchill was a brilliant strategist, a bright publicist, a politician who had fantastic intuition, but can one explain his activity only by noble impulses or was it based on irrepressible ambitions and natural cynicism of the British aristocrat?

“Ambition is the main force”

A descendant of the Duke of Marlborough, Winston Churchill was born in 1874, in his family estate - the Blenheim Palace. His father belonged to the conservative political elite and for some time served as chancellor of the kingdom. In his youth, Winston served in the army, took part in the Sudanese and Anglo-Boer War. Contemporaries portrayed him as “an unprincipled cavalry officer, ready to pull a saber out of its scabbard for any reason.” In 1900, Churchill was first elected to parliament. At the same time he published the artistic novel "Savrol", the main character of which, according to critics, strikingly resembled the author. “Struggle, work, unstoppable running of affairs,” wrote Churchill, “are sacrifices for so many that make life easy, enjoyable — for what? For the good of the people! He hardly admitted that his efforts were directed. Ambition is the main force, and he could not resist it. ”

In 1907, future Prime Minister Lloyd George described his colleague in this way: “His nostrils swell only from the applause of the House of Commons. He likes to be the center of attention most of all and read, probably, too many books about Napoleon. ” Churchill was called the “hero of self-promotion” and noted that he easily changes his beliefs. “The parties serve him as a tool for achieving their own goals,” wrote Spectator magazine on the eve of the First World War, “we cannot find in him a single principle. He just holds his nose to the wind. ” “Churchill, of course, was a seasoned politician ready to use all means to achieve his goals, ready to deceive and change,” historian Roy Medvedev said in an interview with However. “He did not hesitate to move from party to party, he was a liberal, now a conservative.”

At 35, Churchill becomes Minister of the Interior and is not afraid to use force against participants in peaceful demonstrations in Liverpool. “He was determined to solve cases with a cannonball,” wrote the British journalist Charles Masterman, “let out frenzy out newsletters and was eager to give the demonstrators a good rumble.” According to a leading researcher at the Russian Institute stories RAS Yuri Zhukov, "in fact, Churchill repeated what we had in 1905-th year. He constantly demonstrated his cynicism, openly making it clear that in politics he is guided by considerations of profit and will not hide behind vain ideological formulas. ”

"Let the Huns kill the Bolsheviks"

In 1917, Churchill held the post of Minister of War, and the fix idea for him was “a crusade against Bolshevism.” He strengthens the British military contingents in Murmansk and Arkhangelsk, recognizes the regimes of Kolchak and Denikin, and pushes the Germans to invade Soviet Russia, cynically saying: "Let the Huns kill the Bolsheviks." “Churchill joined this crazy adventure as if he were the emperor of the British Isles,” wrote Labor Party leader Ramsay MacDonald. According to the British historian Giles Milton, the author of the book “Russian Roulette”, “in August 1919 of the year Churchill decided, without hesitation, to use chemical weapon against the Red Army and the villages that were controlled by the Bolsheviks. The soldiers fled in panic as the green gas-chemical cloud drifted toward them. Those who fell into the cloud vomited blood, and then they fell unconscious. ”

Churchill insisted on the use of poisonous gas against the rebel tribes of northern India, accusing the opponents of such a policy of "disgust and unnecessary sentiments." “Why do you think that the British artilleryman should be tormented by remorse when he fired a projectile, which, strictly speaking, sneezes?” He asked. At the beginning of 20's as minister of the colonies, Churchill became famous for his tough, uncompromising approach. When in India, a supporter of non-violent methods of struggle against the colonial authorities, Mahatma Gandhi went on a hunger strike, he threw cynically: “What do we need? Let him die of hunger. " According to Roy Medvedev, “in the colonial empire, Churchill acted with the cruelty and severity of the imperial leader, was ready to suppress liberation movements and, of course, treated the people of the colonial countries as second-third people.”

In the 30-ies, Churchill actually retired. In London, he was called "a washed-up man," "wine that had been exhausted." In 29, he was completely devastated by investing his money in securities just before the collapse on Wall Street, and therefore was in a severe depression, which he dubbed the "black dog." Churchill helped, oddly enough, Hitler. In conditions when many representatives of the British political elite felt sympathy for the German Fuhrer, including because they hoped to incite him against Soviet Russia, Churchill relied on the confrontation with Nazi Germany and was not mistaken. At the beginning of the Second World War, the king ordered him to form a government.

“If a million dies, it's statistics”

During this period, Churchill actually had absolute power and did not meet opposition. “This is a real dictatorship,” said Colonel Maurice Hanky, head of the secretariat of the Prime Minister. - The work of the Military Cabinet and military committees is reduced to long monologues of one person. Others just agree. The Committee of the Chiefs of Staff, exhausted by sleepless nights, gradually turns into a planning committee. ” Lloyd George complained to the Australian Prime Minister Menzi that "Winston is playing the role of chief strategist without the necessary qualifications and support of energetic chiefs of staff." He said that he would like to see the military office more professional and less prone to Churchill's whims. “Churchill is made from that dough from which tyrants are molded,” proclaimed the seal keeper, Lord William Beaverbrook.

To achieve his goals, Winston did not stop at nothing. “If you want to reach your goal,” he used to say, “do not try to be delicate or smart. Use coarse techniques. Hit the target immediately. Go back and strike again. Then strike again with a strong blow from the shoulder. ” In 1940, the British Prime Minister gave the order to drown the French fleet in Oranta so that it would not go to Germany. And in 1945, he called for the shooting of “communist rebels” in Greece, although it was the communists who played the leading role in freeing the country from the German occupiers. Churchill is credited with the phrase: "if one person died, this is a tragedy, if a million people die, this is statistics."

Although during the war years Churchill cooperated with the Soviet Union, he treated Russians much worse than the US leader Franklin Roosevelt. It is known that Stalin did not trust Churchill, considering him a cynical fox, and even spoke about it to the American president. For his part, the British prime minister tried to destroy the emerging mutual understanding between Stalin and Roosevelt. He constantly asked Stalin for help, especially when the Allied troops were in a difficult situation for them, as during the offensive in the Ardennes in 44, at the very least, he acted against Moscow's interests at every opportunity.

According to archival documents declassified in 1998, after the victory over the Germans, Churchill seriously planned to “overturn the Soviet Union, weakened by the war, by placing a sudden tripping on him”. In the operation “Unthinkable” developed by him, 50 of the British and American divisions, as well as the surviving divisions of the Wehrmacht, which Churchill thought to throw against the USSR, were to take part. According to the doctor of historical sciences, Valentin Falin, who headed the international department of the Central Committee of the CPSU in 1988 – 1991, “even from 1944, the British began to collect German prisoners in special camps to use them later in a total war against the USSR, which, according to Churchill’s idea, should be subjugated to the will of the United States and Great Britain. ” After the defeat of Sir Winston in the elections in July 1945 year, the plan was put on the shelf.

Nevertheless, it was Churchill, who had long assured Stalin of his allied feelings, that became the main instigator of the Cold War. 5 March 1946, at the request of the American President Harry Truman, he gave a speech at the opening of the college in the Missouri city of Fulton. “From Stettin on the Baltic to Trieste on the Adriatic, across the continent, the iron curtain was lowered,” he proclaimed and blamed the USSR.

Moreover, according to some historians, the irreconcilable tone of the speech was explained simply. Churchill was annoyed that the sale of alcohol was banned in Fulton. Without knowing this circumstance, it is impossible to understand the first words of the speaker who came to the rostrum: “I thought I was in Fulton, Missouri, but I ended up in Fulton, the Sahara.” By that time, the two leaders of the Western world had already taken it well on their chests. Met by Truman, Churchill, according to eyewitnesses, said, slyly flashed his eyes: “Staying in unknown edges of me, I invariably use the following rule - a few drops of whiskey in the local water. To neutralize bacteria. ” Then the two on the presidential train allowed themselves to relax. As a result, Truman asked for the uniform of the conductor and, within forty minutes, tried the locomotive horn together with Churchill. Toward the close of a speech, the leader of the United States sent a note to his British counterpart: "Winston, a plane from Canada has just delivered an excellent whiskey." And the former prime minister, unexpectedly softened, gave praise to the “Russian comrades-in-arms.” It is worth noting that at the end of 30, the American ambassador to Great Britain, Joseph Kennedy (father of the future president of the United States), called Churchill “a drunkard with two hands clutching at a bottle, whose judgments are rarely sound”.

Churchill for many contemporaries became a symbol of leaving the British Empire. However 50-years, the last time in his life taking the post of prime minister, he was more like a caricature of John Bull, which is considered a symbol of Great Britain.

If we talk about how his image was transformed, then whatever Western historians write now, Sir Winston has never been a “prophet of humanism”. More than anything, he was attracted by the gambling political game, the main prize in which was power. “Power,” he wrote, “is a drug. Who tried it at least once - poisoned forever. " And there is no doubt that for Churchill, power was more important than abstract ideals.