January 30 2014
14
In Asia, light armored vehicles are in special demand, not the main combat ones. Tanks 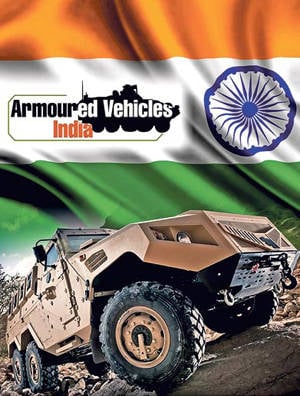 The market of Indian armored vehicles is considered one of the fastest growing in the world. The results of the conference “Armored Vehicles India 2013” held on 2013 – 18 in November 20 in New Delhi clearly showed that this country is the most promising Asian import market for armored vehicles and will remain so for the next decade. During the preparation of the report “Indian Armored Vehicle Market, 2013 – 2012” (Indian Armored Vehicle Market, 2022 – 2012), based on a survey of specialists, an analysis was made of the main parameters that will play a decisive role in the acquisition of various armored vehicles on the Asian market. The People's Republic of China stands alone, having achieved very significant success in the production of its tanks and armored vehicles. Conference participants predict that sooner or later India will go the way of the PRC.

The survey, which was attended by a specialist 144 (45 from the military, 99 from the civilian sector), identified views on a number of issues related to the production and import of armored vehicles. Questions were asked about the situation taking shape in both the general Asian and individual Indian markets. The results showed that almost all parameters are the same. In the presented diagrams, the main indicator is the percentage of experts who have chosen a particular option. A number of questions used the principle of multiple choice - as a result, the total amount of indicators exceeds one hundred percent.

One of the most important problems is the determination of the volume of armored vehicles markets in the world. Respondents answered other questions. For example, on determining the basic parameters of armored vehicles that will be relevant in the procurement of India and other Asian countries. According to experts, the choice of decisive will be the requirements for universality, transportability, adaptability to different conditions, security. These parameters were reduced to three groups - survival, mobility, reliability (they did not take into account the cost). At the same time, in the framework of the two studies described, questions were asked only on the Indian armored vehicles market.

The data obtained show that protection is one of the main characteristics of armored vehicles, which India and Asian countries are planning to buy in the future. Experts note that in the Indian armed forces there are certain contradictions between the supporters of the protection and mobility of military vehicles. At one of the conferences, Brigadier General Mohanty, who served in the Indian group of the UN contingent in the Congo (MONUSCO), said: “The tasks of security can be solved through mobility. Only mobility will provide the necessary security requirements. We need to have in the armed forces lightly armored vehicles with a high rate of specific engine power. I believe that only in this way can we provide the necessary protection. ” But the lieutenant-general in the reserve Dalbir Singh Sidhu at the conference "Armored Wicks India-2013" said that the Indian armed forces pay special attention to the indicators of security and survival of various types of armored vehicles. Both military men are authoritative experts in their country, to whose voice they listen. 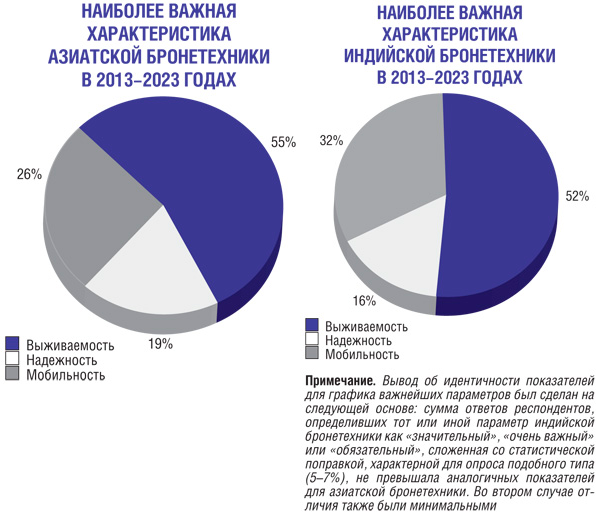 Another controversial issue - ensuring the protection of armored vehicles from improvised explosive devices (IEDs). The problem is particularly relevant for NATO armies that have encountered them in Iraq and Afghanistan. For India and other Asian countries, it may be less significant, since the likelihood of using VCA directly depends on the country's involvement in guerrilla warfare. But John Hawkes, a senior analyst with DS Forecast, part of IHS Jane's, wrote: “As it became clear after some time, many countries whose armored vehicles do not feel the need to protect against self-made explosive devices nevertheless purchase equipment with a high level of protection against these munitions. This is due to the desire to conform to the image of the modern armed forces. ”

However, experts believe that the Indian military should take into account all the smallest probabilities in the future. Experts who took part in 144 surveys called IEDs the most serious threat, although the study did not take into account the specifics of the region. A chemical or biological as well weapon directed energy transfer was identified as the least likely threat. But in the expert community there are also special opinions. For example, British Lieutenant General John Kiszeli pointed out the too high uncertainty and unpredictability of the nature of threats in future conflicts and suggested not to dismiss chemical and biological weapons.

In connection with the exhibition “Armored Week India-2013”, a survey was also conducted on the types of armored vehicles that will be in demand in Asia in the near future. The data obtained showed that most likely it will become light types - armored personnel carriers, partly reconnaissance and infantry fighting vehicles. This is probably due to certain logistical difficulties, climate, and experience gained during various military operations. Of all the types of armored vehicles, the main battle tanks were the least popular among the respondents, although a decade ago the situation was diametrically opposite. The reason may be in the revealed difficulties of maintenance, as well as in the absence of relevant combat missions to the armies of India and neighbors in the continent at the present time. The lowest estimates in the area of ​​demand for them received uninhabited ground vehicles (NNA).

According to experts, this type of robotized ground equipment is still far from mass adoption. Its use may become necessary only in future conflicts. Nevertheless, progress is evident: ten years ago, the NNA were perceived as a fantastic technique, and now they are increasingly acquiring the features of real combat vehicles. 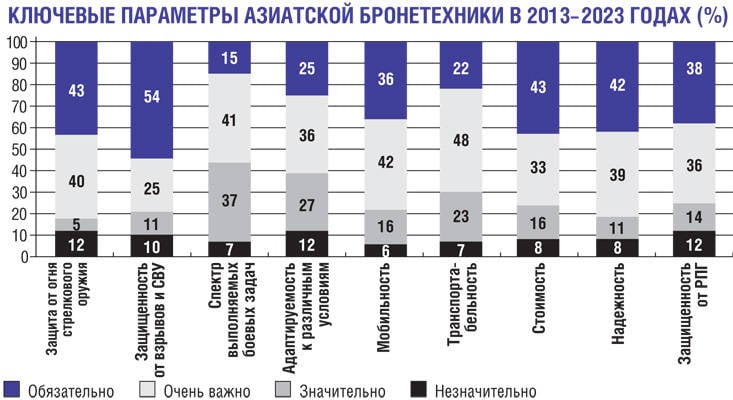 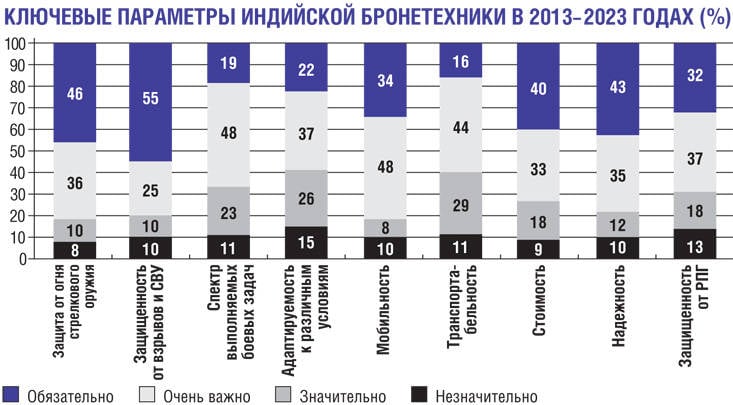 The Indian arms market is currently considered one of the most dynamic on the continent. Among the main reasons for its growth, experts point out the geopolitical situation, uneasy relations with neighbors. Simon Weseman, who participated in the program of the Stockholm Institute for the Study of World Problems in Arms Market Research, put it this way: “Most often they refer to rivalry with China and Pakistan and to solving problems of internal security. As an importer, India needs offset contracts and technology transfer to develop its own defense industry. In order to be guaranteed an order, many exporters of weapons agree to these conditions. ” 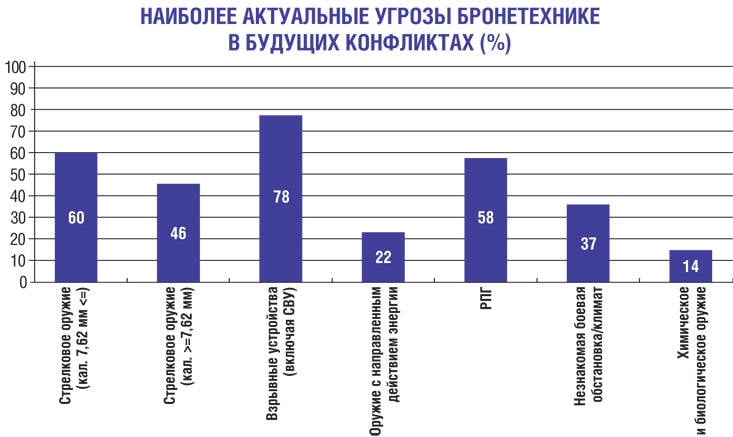 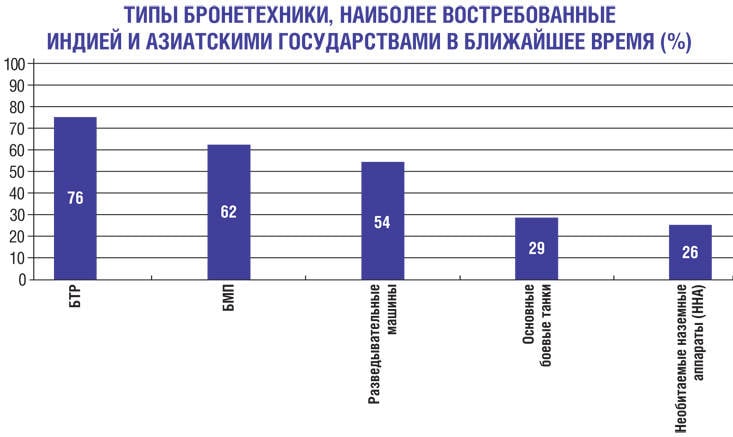 General Sidhu, at the Armor Weeks India-2013 conference, mentioned that India had made significant progress in the production of various systems for equipping armored vehicles. At the same time, the state sector of the defense industry is mainly involved. According to the general, his country has one of the world's largest fleets of armored vehicles. Sidhu paid special attention to the fact that national manufacturers quickly and efficiently learn from the experience of various foreign enterprises. The production of optoelectronic and digital components and subsystems for combat vehicles is developing particularly well. In the development and production of its armored vehicles, India also uses elements that are commercially available and fall into the COTS (Commercial Off-the-Shelf) group.

Experts believe that in the near future, New Delhi will gradually reduce imports of various types of armored vehicles, or even switch to equipping the army with samples of its own production, the technologies of which can be acquired under license. That is, it will follow the path of the People’s Republic of China, which has almost completely switched to domestic armored vehicles.