January 30 2014
16
In the next decade, UAV manufacturers will spend billions on the production of drones for various purposes 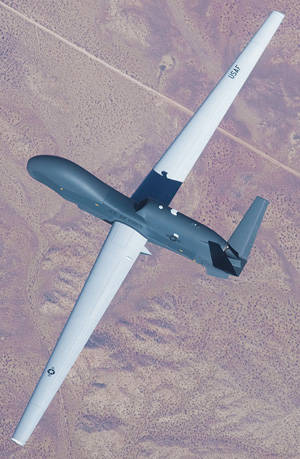 The volume of the world market for unmanned aerial vehicles (UAVs) in the coming decade (2014 – 2023) will be 67,3 billion dollars, reported the American weekly Aviation Week and Space Technology, citing analysts of Forcasting International.

The United States will remain the largest player in the global drone market, their share will be 37,8 percent of the total market. The share of Israel will be 3,3 percent, European countries - 2,85 percent, all other states - 41,17 percent. The share of pending contracts will be 8,88 percent.

According to the forecast of American analysts, Northrop Grumman will retain its leading position in the market for unmanned aerial vehicles in the coming decade. Among the major manufacturers of UAVs, the market places in 2014 – 2023 will be distributed as follows: Northrop Grumman with the Global Hawk UAV - 18,2 percent, General Atomix with the Predator UAV family - 15,5, the AAI company with the Shadow drone UAV - 2,2, Israel Aerospace Industries with Heron UAV - 1,9, Boeing with Scan Eagle UAV - 1,6 percent. All other global manufacturers of UAVs will have 60,6 percent.

Northrop Grumman will retain its leading position despite the reduction of the Global Hawk RQ-4B program. Even if the fleet of this type is reduced, Northrop will receive under the Global Hawk program up to 2022 5,8 a billion dollars, including funding for the US Navy 68 reconnaissance UAV MQ-4С Triton (Triton) - version of RQ-4B “ Global Hawk.

In May 2013, Germany canceled plans to acquire four Euro Hawk high-altitude unmanned vehicles based on Global Hawk in the 20 unit, citing the complexity of their integration into Europe’s airspace. Nonetheless, Northrop continues to supply five Global Hawk units for NATO to 2016 in the 40 block version.

The implementation of plans to export high-altitude drones for a long duration of a HALE type of flight is being implemented at a slow pace. The Republic of Korea intends to order four RQ-2014Bs in the “4 block” variant in 30. Japan also intends to place an order for four devices of this type, but in 2015. Canada and Norway are among the countries interested in the Global Hawk UAV, while Australia is interested in the Triton naval reconnaissance UAV.

Northrop Grumman is also present on the UAV market with the MQ-8 family of rotary-wing UAVs Fire Scout and, according to analysts, will receive $ 2022 million under this program until 679,5. Since October 2013, a new version of the MQ-8C has been tested with a take-off weight of 2700 kilograms and a longer flight duration. This option is based on the Bell-407 helicopter. In the future, the production of rotary-wing UAVs "Fire Scout", ordered by the US Navy, is planned to be transferred from the MQ-8B variant to the MQ-8C variant. The US Navy recently confirmed its plans to deploy Fire Scout UAVs on new LCS-type coastal warships. The structure of the combat module of the ship for conducting surface combat operations will include an unmanned aviation complex with three devices in the MQ-8B version. But as soon as the accepted test version of the MQ-8C is adopted, the number of unmanned vehicles in the combat module will be reduced to two units.

Northrop Grumman also participates in the X-47B strike deck UAV program, which will continue to be tested in 2014, and is developing the latest unmanned RQ-180 unmanned vehicle for the US Air Force, information about it has recently appeared in the open press. 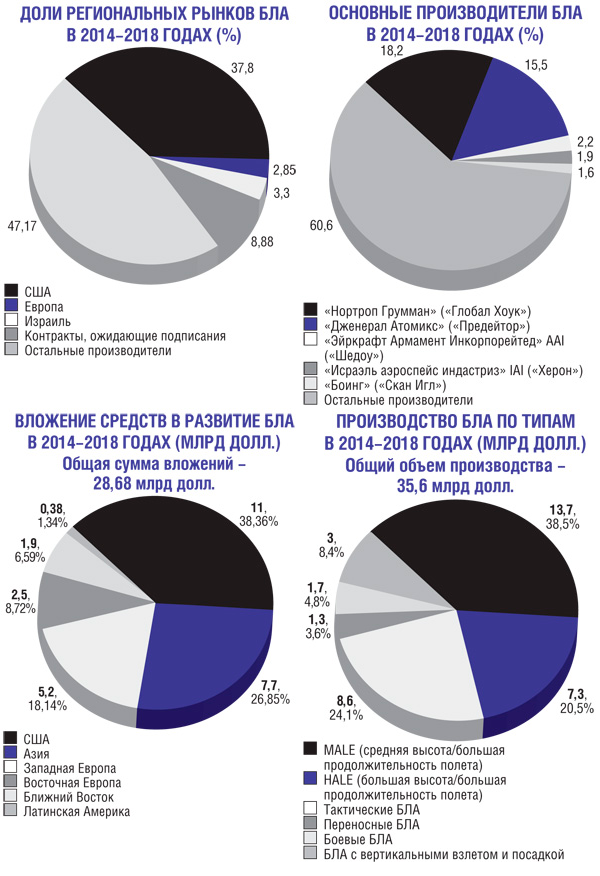 The American company General Atomix will retain its leading position among the world's leading manufacturers of unmanned aerial vehicles in the coming decade. According to Forecast International, General Atomix will rank second after Northrop Grumman for 2014 – 2023, controlling 15,5 percent of the global UAV market, while Northrop’s share will be 18,2 percent.

It is assumed that the production volume of the MQ-1 “Predator” / MQ-9 “Riper” before 2022 year will be 5,5 billion dollars, which corresponds to 40 percent in the segment of UAV-type drones and approximately 16 percent in the whole world market of unmanned vehicles.

The US Army continues to purchase the Gray Eagle MQ-1C UAV, but the Air Force plans to purchase only half of the MQ-2014 vehicles from the 9 year. At the same time, the export market of these devices is limited by the terms of the agreement on control over the export of MTCR missile technologies.

General Atomix is ​​currently developing a new expeditionary version of the Gray Eagle UAV, which has a transformable structure to ensure its transportation to the theaters of operations and deployment as part of the expeditionary force. The development of this device is connected with the fact that after the Pentagon has decided to shift its strategic interests in the Asia-Pacific region (APR), the army and other types of US forces consider various aspects of the deployment of expeditionary forces in this region.

The developed version of the Gray Eagle UAV can be easily transferred to the necessary regions on board military transport aircraft, by analogy with the transportation of other army aircraft.

To meet the new requirements of the ground forces command, the Improved Gray Eagle will have 40 percent more space to accommodate the payload and a longer flight time.

The US Special Operations Forces have also shown interest in the improved Gray Eagle. The development company planned to begin flight testing of the device in a configuration designed to provide special operations from 17 in January. In this case, the configuration of the UAV will provide for the deployment of electronic reconnaissance equipment.

In 2017, the Netherlands will become the fourth European state to exploit the Reaper UAV after France, Italy and the UK. Australia, Canada and Germany are interested in devices of this type, although orders from these countries will not be placed until 2015 – 2016.

The UAE ordered five UAVs in the Predator XP version, an export modification of the MQ-1 vehicle. A number of countries in the Gulf region are also interested in General Atomix products.

In November, the French defense ministers of France, Germany, Greece, Italy, Poland, Spain and the Netherlands initiated the development of common requirements for MALE unmanned aerial vehicles that will be created for the 2013 year by the European Defense Agency EDA (European Defense Agency). Currently, a number of countries are already working in Europe in the field of unmanned vehicles. In particular, the attempts of Great Britain and France through the BAE Systems and Dassault Aviation companies to jointly develop the Telemas MALE UAVs were unsuccessful and this project has been postponed. However, in June 2020, the West European concern ЕАДС (EADS), "Dassault" and the Italian "Alenia Aermacchi" spoke in favor of a European program for the creation of UAVs and began to jointly define the concept of a MALE twin-engined UAV.

In addition, Italy will work with Piaggo Aero and Selex ES to certify the first European MALE P.1HH Hammer Head type UAX P.180 “ Avanti ”, and also analyzes the variant of the UAV of a longer perspective. The demonstrator P.1HH performed its first unmanned flight last November, and the device will be ready for commissioning in the 2015. The development of the UAV is supported by the owners of the company “Pyaggo” - the company “Mubadala” from the United Arab Emirates and the Indian “Tata”.

Currently, European companies control less than three percent of the UAV market, but this share will increase as the number of unmanned vehicle fleets increases by various countries.

In the coming decade, orders for drones from Africa, the Middle East, and Latin America may exceed two billion dollars, and only UAV purchases by the armed forces of Israel will make up almost half of this amount.

The annual production of UAVs in Asia will triple over the next decade and will reach 2022 billion dollars by 2,9 year. The sales of UAVs in the Asian region over this period could amount to 18 billion dollars in the total market, with 13 billion in China.

Experts point out a sharp increase in China’s capabilities in the unmanned vehicles sector. In particular, in September of 2013, Japanese fighters intercepted the Chinese UAB "Harbin" BZK-005, a MALE device of the Predator class, which was flying from a surface ship. In November last year, the low-profile attack UAV Lijian UCAV (Unmanned Combat Air Vehicle) made its first flight from the airfield of the Chengdu Aviation Plant. This unit is similar in configuration and dimensions to the demonstrators of the drums of the Phantom Ray drone produced by the Boeing company and the Neuron company of the Dassault company.

Demonstration flights of the US Navy’s X-47B shock UAV demonstrator for the US Navy’s development will continue in the 2014 year, as will the test flights of the Neuron and Taranis drone drone demonstrators made by BAE Systems. At the beginning of the 2015, the US Navy will have to decide on a tender for the development of a deck-based unmanned reconnaissance aviation system UCLASS (Unmanned Carrier-Launched Airborne Surveillance and Strike).

The development of a civilian UAV is proceeding at an accelerated pace. The US Federal Aviation Administration (FAA) estimates that 7500 unmanned vehicles will appear in the United States over the next five years. This requires the development of an appropriate regulatory framework that could safely integrate unmanned vehicles into national airspace by the end of 2015. Most of these devices will fall into a small class with a mass less than 25 kilograms. Airworthiness rules will be developed most quickly for this category of UAVs. These devices will find the greatest application in power structures.

Europe is still ahead of the United States in the field of civilian UAVs, since in European countries there are almost a thousand vehicles of this type, and some states may even allow flights of unmanned systems weighing less than 150 kilograms. The UAV’s airworthiness requirements are currently being harmonized, and the European Aviation Safety Agency (EASA) is developing airworthiness standards for UAVs over 150 kilograms, which will enable these units to fly in airspace since 2016.