January 28 2014
16
C-2 Greyhound is an American carrier-based tactical transport aircraft. The medium-range machine was developed by the American company Grumman under the Carrier Onboard Delivery (COD) program based on the E-2A Hawkeye long-range radar detection aircraft. C-2A Greyhound was intended for the transport of goods and personnel aircraft carriers and between coastal bases. Aircraft "Hawk" successfully used in all armed conflicts in which were involved in the US aircraft carriers. The highly effective actions of these aircraft from aircraft carriers forced the fleet to consider them from a completely different angle - as a vehicle. The first prototype of the aircraft, designed to deliver cargo to aircraft carriers, took off on November 18 1964. The US Navy adopted the aircraft in December 1966 of the year. It was released 58 aircraft. 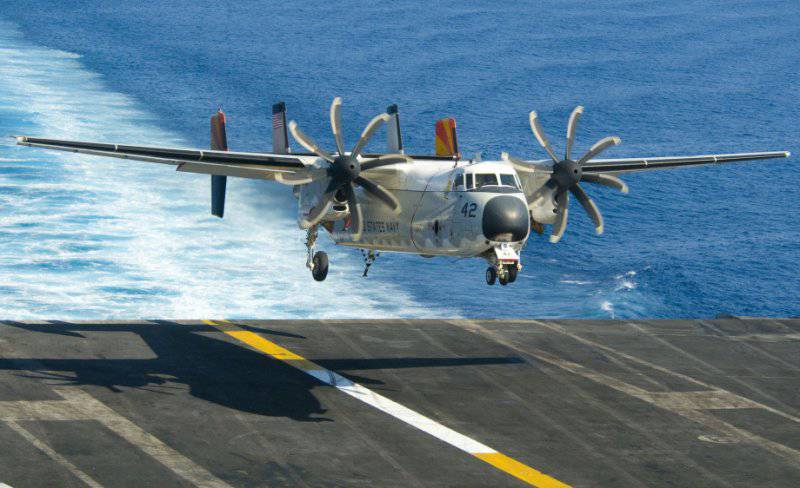 From its progenitor Hawkeye C-2A Greyhound is significantly different. The main external difference is a modified fuselage of a larger section, a straightened tail section with a cargo door. Less noticeable, but important are tail tail changes, which have improved airflow around the aircraft. These changes became possible after the extensive radar antenna was removed over the fuselage. It should also be noted the strengthening of the nose landing gear due to an increase in flight mass in comparison with the E-2.

The first production aircraft of the C-2A Greyhound were close in design to the E-2A, however, in the absence of an antenna radome and a V-shaped horizontal tail, the presence of a larger fuselage. The floor of the cargo hold was enhanced by rail guides. In addition to cargo, the aircraft could carry 39 soldiers. The aircraft could be converted to carry 20 stretcher with wounded with accompanying 4.

At the beginning of 1982, the US Navy ordered a second batch of C-2A Greyhound from 39 machines, based on the E-2C. The first of these was put into service in 1985 year. These aircraft were distinguished by improved engines, a convenient layout for accommodating goods and passengers, as well as improved radio-electronic equipment.

The all-metal fuselage has an oval shape in cross section. The C-2 Greyhound has a pressurized cabin. In front there is a cabin for two pilots, a luggage compartment and a toilet. In the middle part is a cargo cabin (8,38x2,23x1,68 m), equipped with numerous mooring units and electric hoists. Aft cargo door with integrated ramp - ramp 1,98 m high 2,29 m wide. The crew door is located in the forward fuselage on the left side of the board. 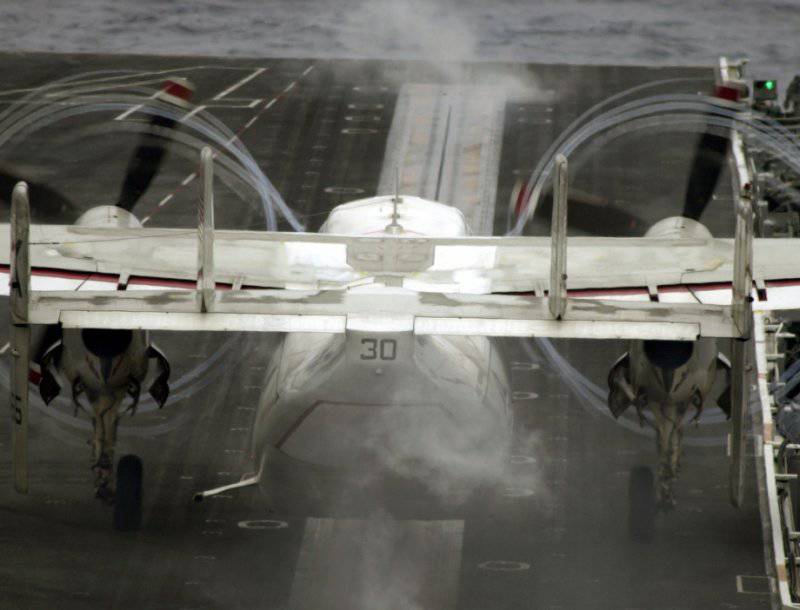 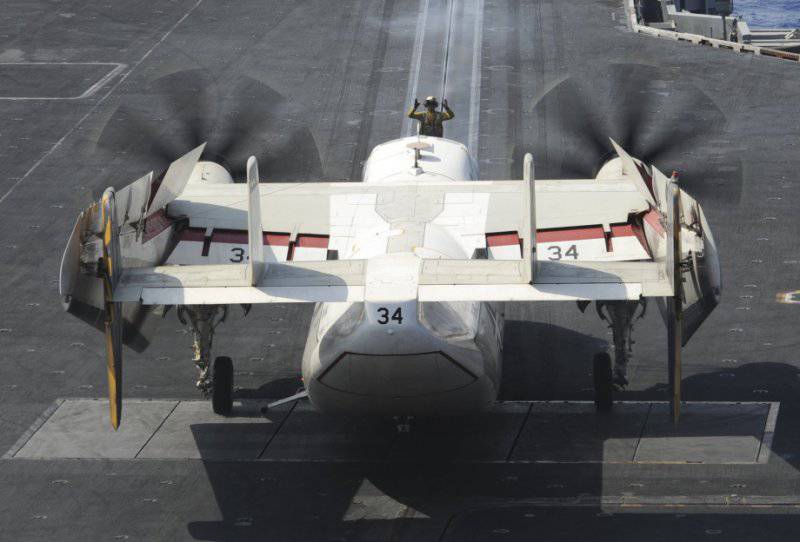 Wing all-metal construction. The three-spar wing of all-metal construction, the angle of the wing at the root is 4 hail and the ends are 1 hail, the root chord 3,96 m and the trailing chord 1,32 m. fuselage. The wing sock is attached using hinges and may be deflected to inspect the pneumatic de-icing system and wiring the engine control system upwards. Wing mechanization - Fowler flaps and hovering ailerons.

The tail stabilizer (area 11,62 m2, span 7,99 m) with elevators has a zero angle V. The 3 keel of 4 is equipped with two-segment rudders. To reduce the EPR of the aircraft, fiberglass was used in the tail assembly. Socks keels and stabilizer are supplied with pneumatic pic.

The tricycle landing gear with two-wheeled front and one-wheel main racks. The shock absorbers of the oil-pneumatic struts, the exhaust system and the landing gear cleaning are hydraulic (duplicated by an emergency pneumatic exhaust system). Under the tail of the fuselage is a brake A-shaped retractable hook.

The C-2A is equipped with Allison T56-A-8 / 8A turboprop engines. With 1988, a part of the aircraft received the T56-A-427 engines with a digital control system. The propellers "General Electric" or "Hamilton Standard" - four-blade reversible vane with speed control. Screw diameter - 4,11 m.

In the tail of the aircraft installed Garrett VSU. Fuel tank capacity - 6905 l. Suspension of a pair of outboard fuel tanks with a capacity of 1704 or 1135 liters is possible. It is possible to install two additional fuel tanks for 3786 liters. 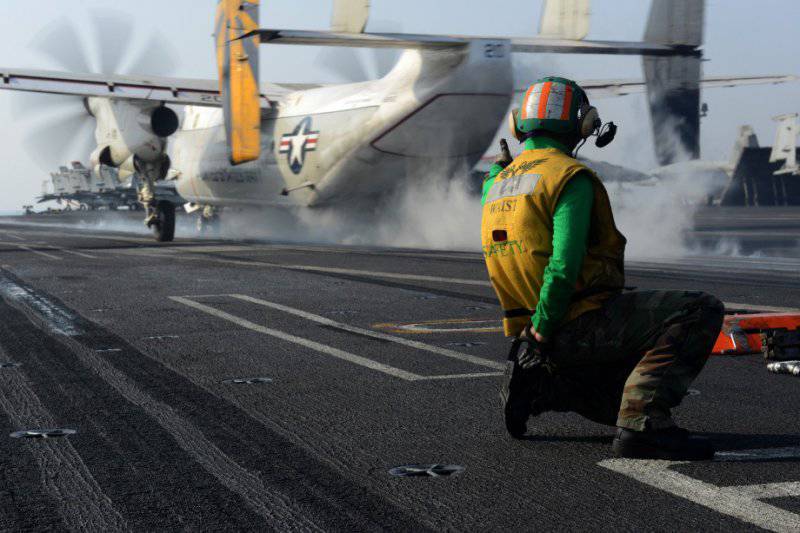 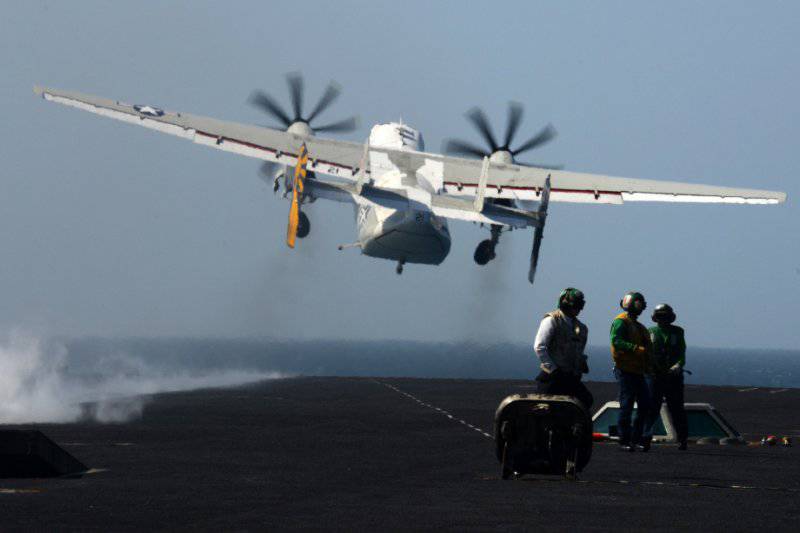 Electrical system - alternating current, with a pair of generators (power of each 60 kW), three-phase, 400 Hz, 115 / 200 B. Auxiliary network - 28 Vdc, with two rectifiers. The emergency generator is driven by a 3 kW hydraulic motor. The air conditioning system provides overpressure in the 0,46 pressure cabinet kg / m2.

The aircraft is equipped with an AN / ASW-15 autopilot, receivers of LORAN and TACAN systems, and radio stations operating in the LF and UHF bands. On some machines installed meteo-radar.

By November, 1964 built three prototypes. For the first time C-2 Greyhound, the 18 of November 1964 of the year took off. 2 December 1964, the aircraft officially adopted by the US Navy. Initially, the aircraft was built in a small series. The US Navy in 1965-1968 received all 19 aircraft. The purchase plan for additional 12 machines was canceled. At the beginning of the 1970-s, along with the C-1A Trader, the entire 10 Greyhound was in service. 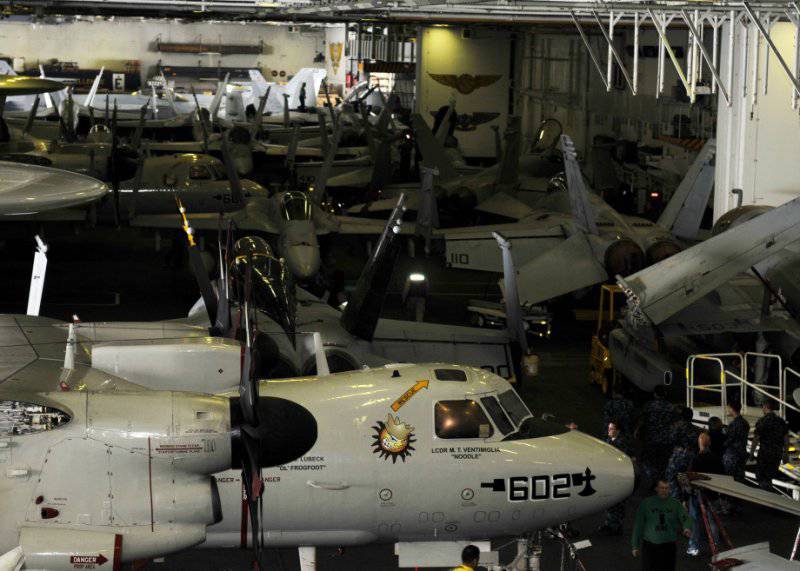 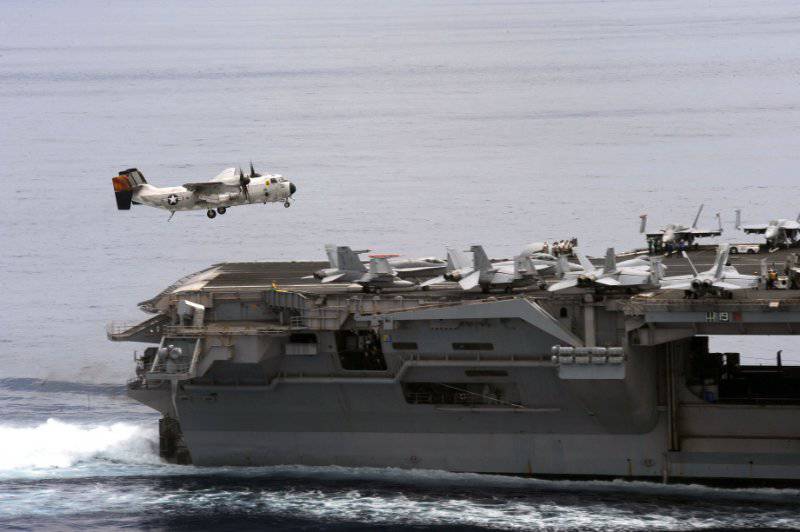 In connection with the upcoming write-off of the C-1A aircraft, as well as a reduction in the number of C-2 flight crews available, the naval command in 1982 decided to resume purchases of Greyhound. The first car (from the 39 additional) was transferred to the 24 th transport squadron (Sigonella airbase, Sicily; VR-24) at the end of 1985 of the year. In 1989, the 678 contract of millions of dollars was executed. Currently, tactical transport aircraft C-2A are in service with the transport squadrons of the VRC-30 and -40 and the experimental 20 squadron. A small number of C-2A Greyhound is operated by the 120 Long Range Radar Detection Squadron, located in Norfolk and preparing crews for Hawkeye. All operated C-2A (36 machines) are subject to modernization in order to extend their resource to 2027 year. During the upgrade, the planes are installed eight-blade screws NP2000. 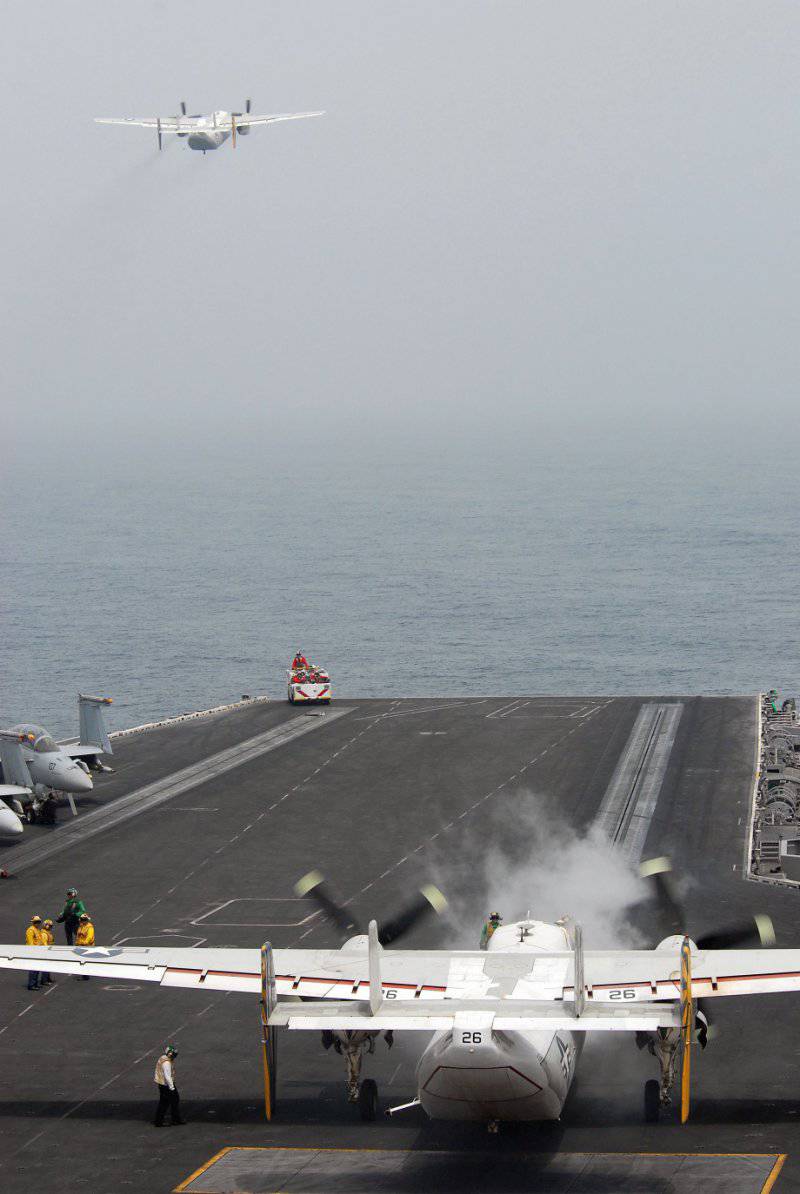 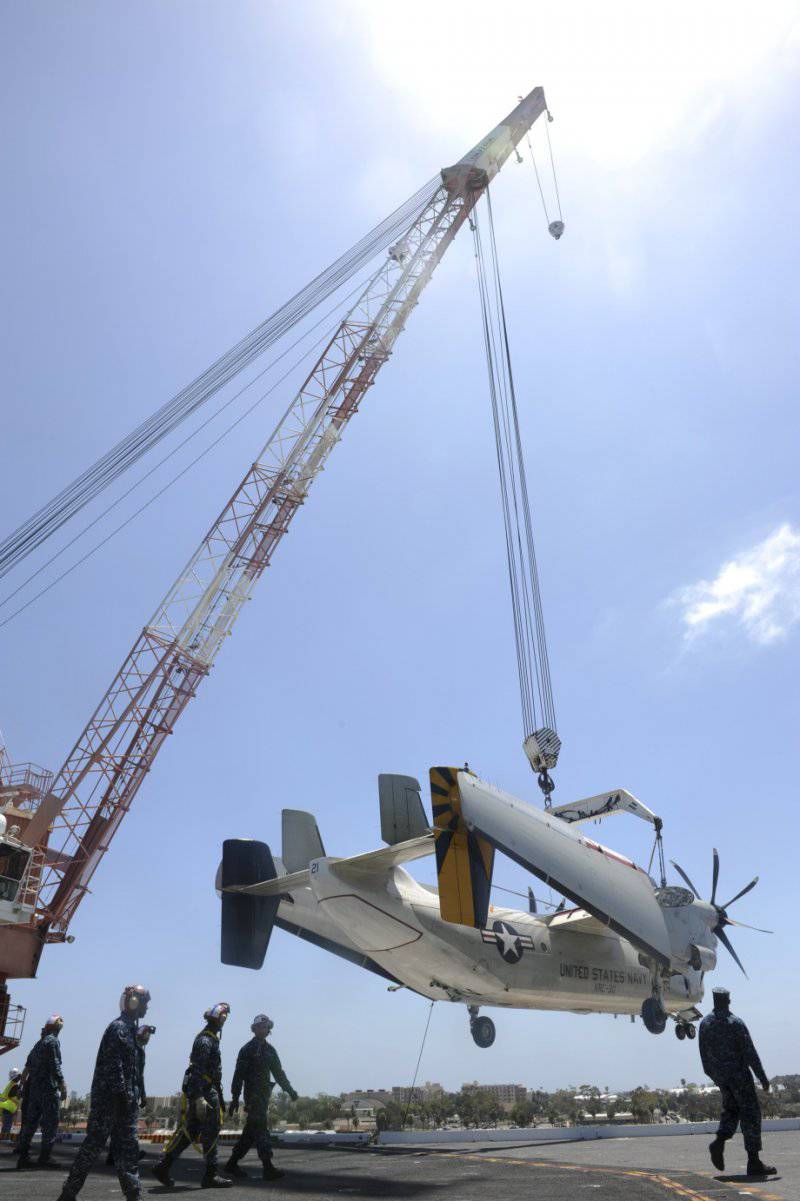 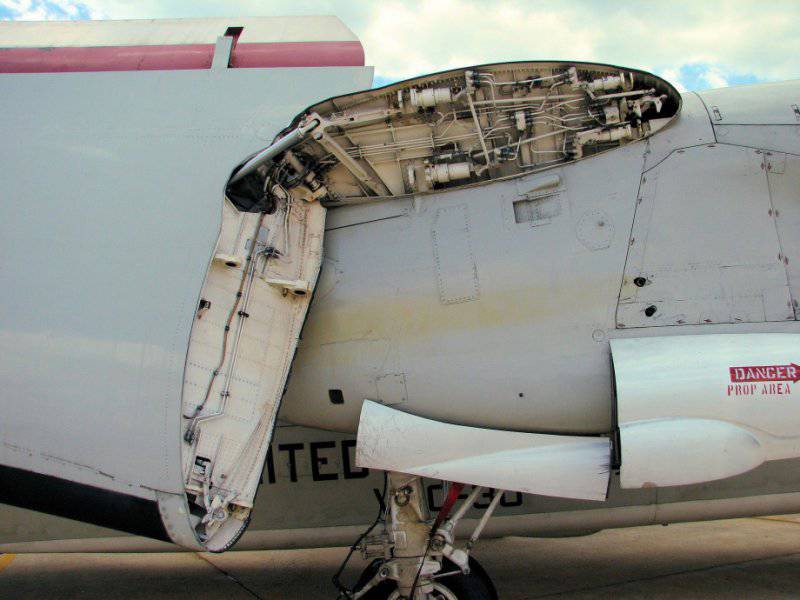 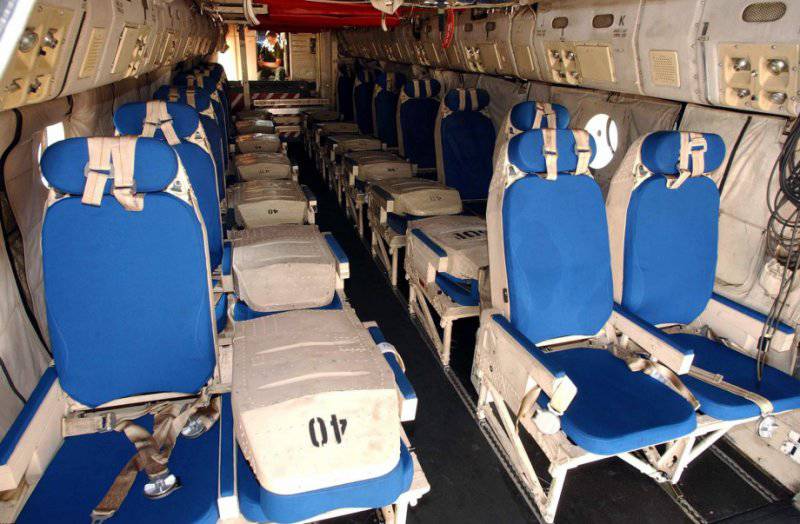 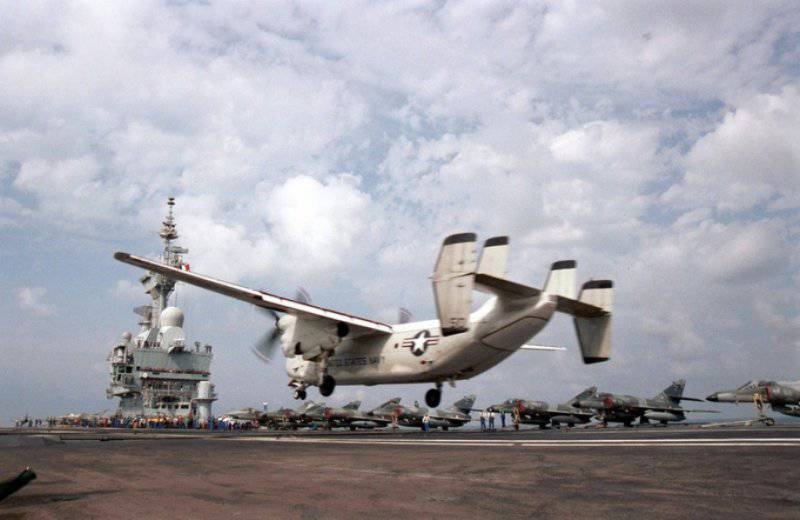 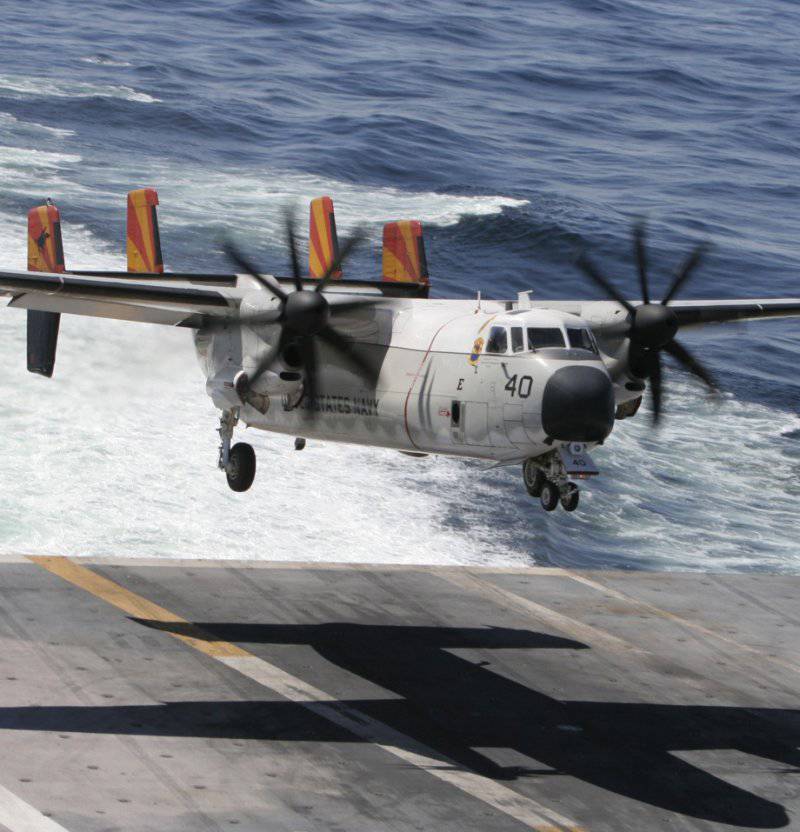 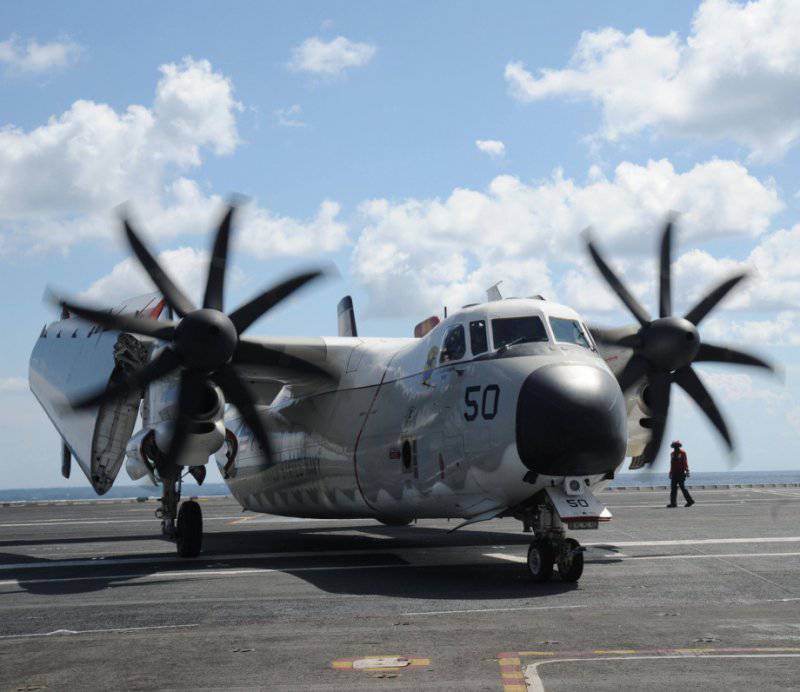 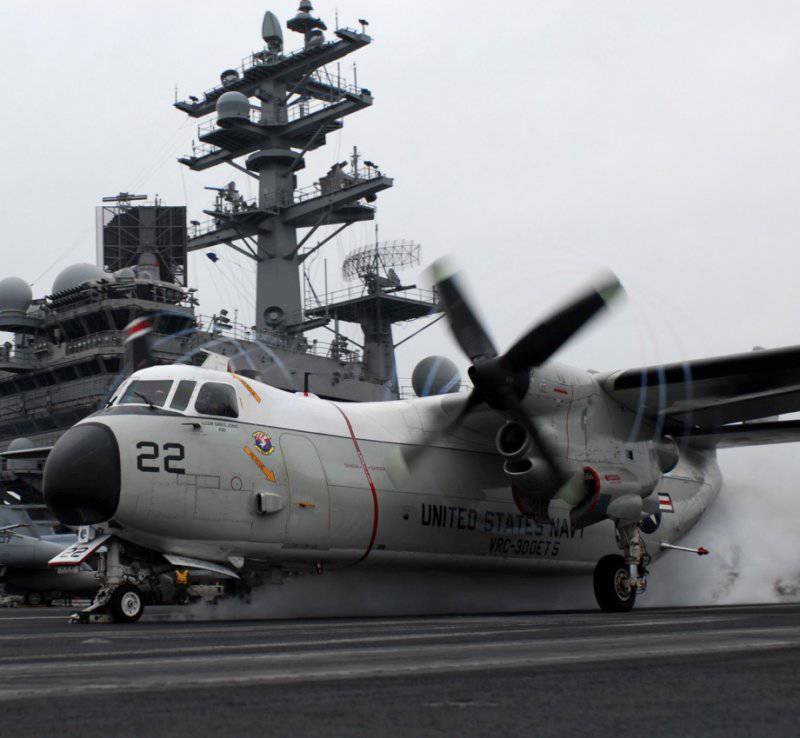 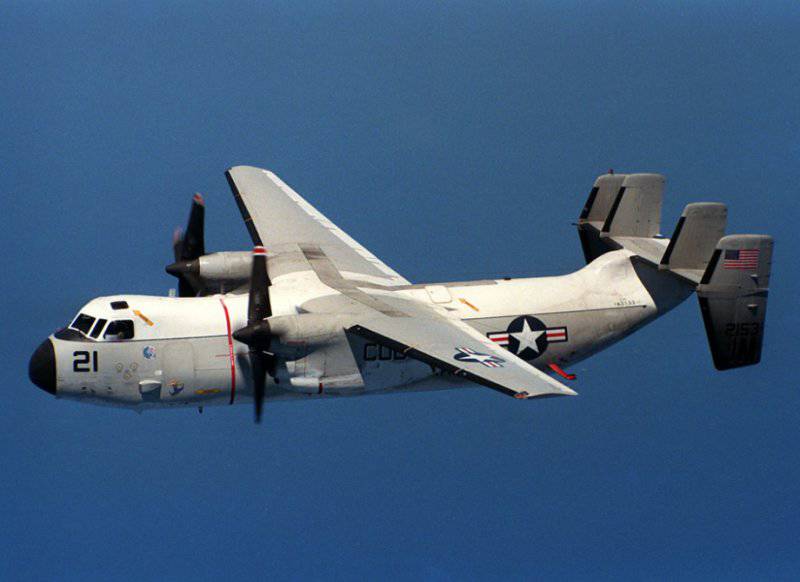 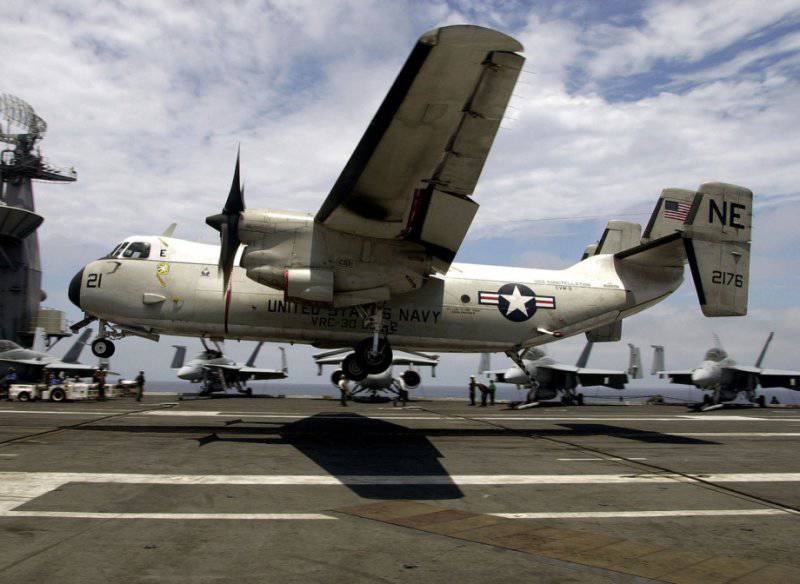 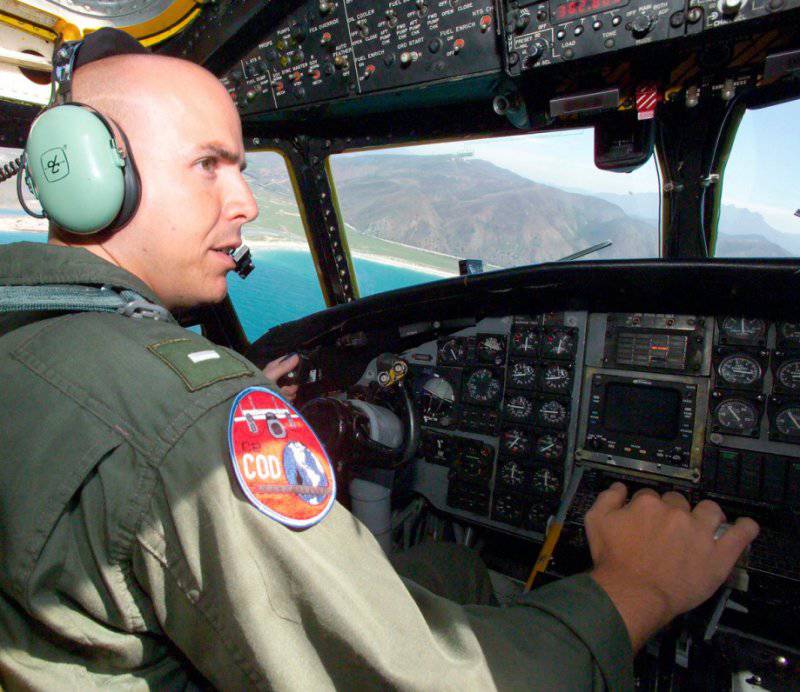 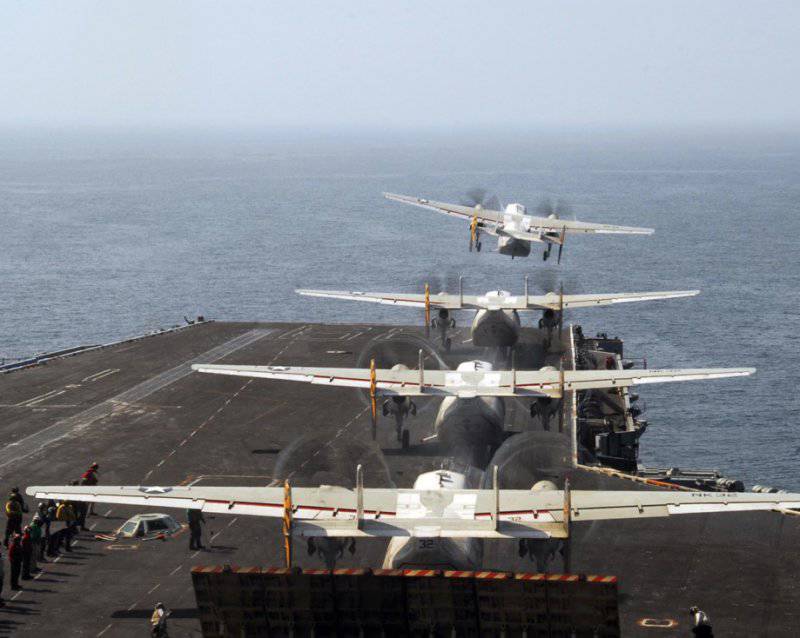 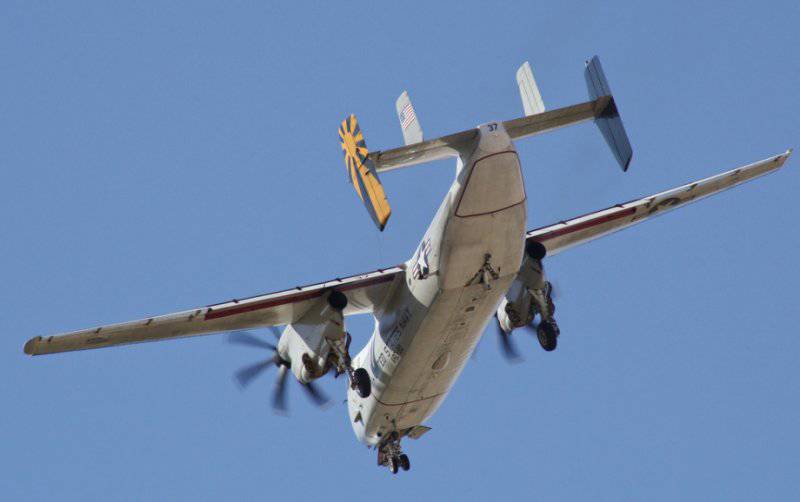 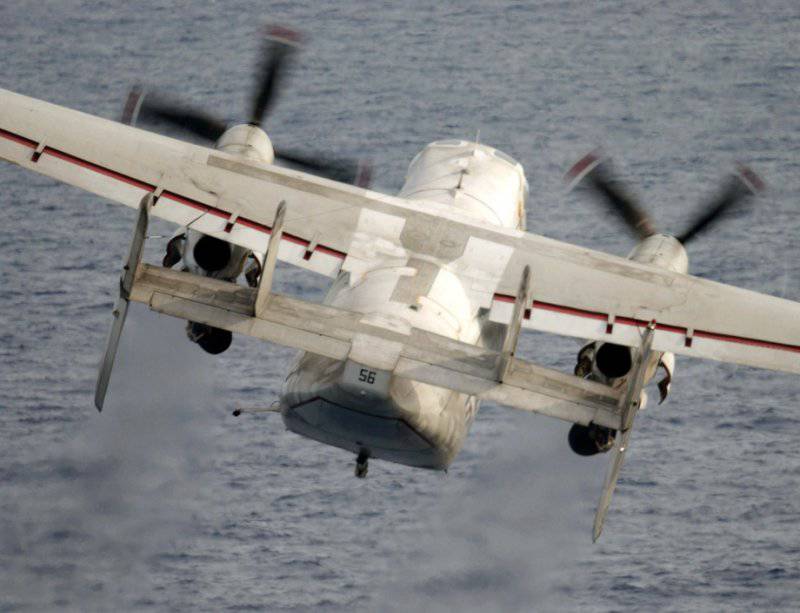 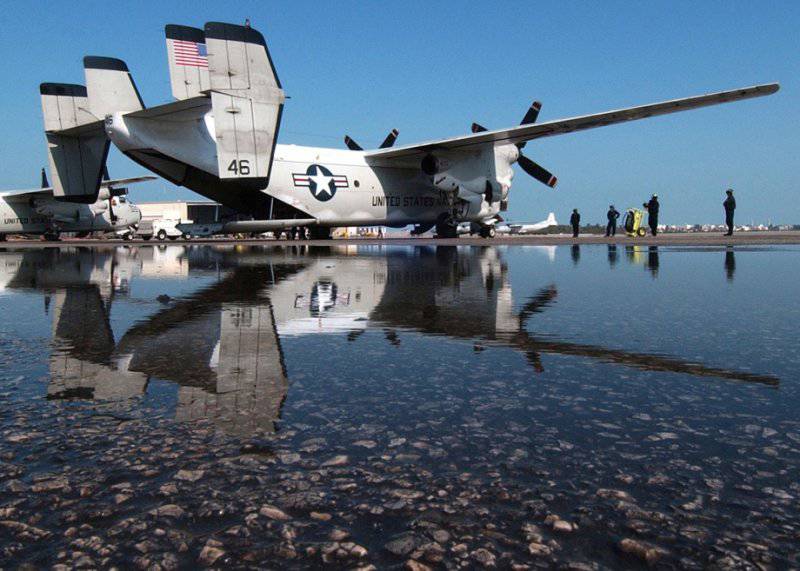 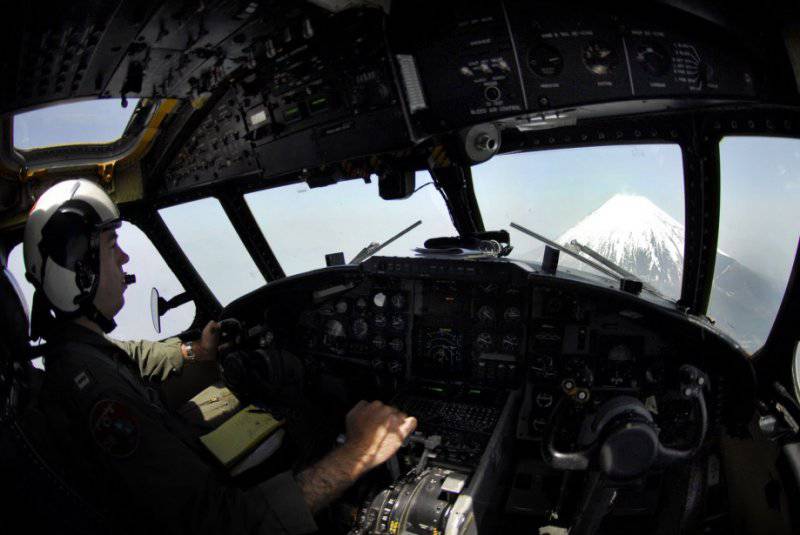