The United States, Hungary, and Romania want to corrupt the Ukraine, convincing her that she is not a virgin. Poland and Russia are silent for now 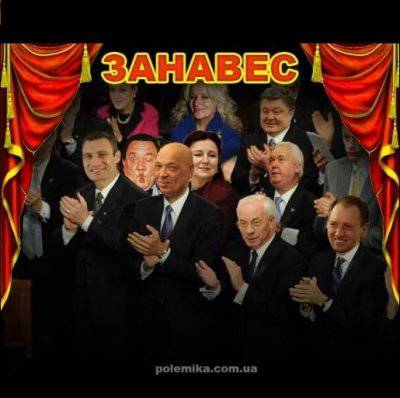 At the EU-Russia summit, European commentators on the Ukrainian problem are pouring insult. Bruno Lete, foreign policy expert at the German Marshall Foundation, is confident that “...Europeans were never prepared for Putin to embark on an insidious zero-sum game in Central and Eastern Europe. ” They say that Brussels was taken aback, not expecting such cynicism on the part of Russia. “Eastern neighbors of Europe from a region of liberal countries with good governance turn into a union of economically weak national countries under the control of authoritarian and loyal to Moscow regimes”.


Against the background of the accusations of treachery in Russia, Leonid Kravchuk’s old-time memoirs, as outlined to Vesti. Reporter the other day, somehow don’t fit in: “I witnessed how the concept of the Eastern Partnership was adopted. Europe thought this: it (Europe) will take all the post-Soviet states as associate members, with a few exceptions. The plan was designed to weaken Russia's geopolitical position. It was a conscious EU policy. But the EU did not take into account how all the post-Soviet states are tied to Russia. They simply did not take this into account - and this is their mistake. Here, for example, our 500 thousands of Ukrainians work in factories that supply products only to the Russian market. And if the Russian Federation refuses these goods, half a million people will lose earnings. It was necessary to conduct a dialogue, to connect Russia to the dialogue. It is possible to make it a member of a free trade agreement - and then Russia’s contact with the EU would facilitate the creation of a single trade and economic space. ”

Oppositionalist Khakamada also likes to remember how the EU flirted with Russia, offering it candy and immediately taking it back.

Ukraine is not Little Russia. Ukraine is not yet an associate member. But they already passionately and for free want both in the East and in the West, clutching in their hands weapon and mentally tearing to pieces a magnificent Ukrainian body in the most frivolous geopolitical fantasies.

Romania is almost ready for a military invasion, and now do not throw a scarf on the Romanian rotok. In the famous Romanian edition of ∆devarul, Ukraine was nicknamed the artificial state, “...emerged from the ruins of the USSR, heterogeneous, with history less than 24 years and to which Romania has the largest territorial claims. "

Hungarians also think so. A Hungarian MEP Bela Kovacs even recently boasted that every half hour the residents of Transcarpathia are applying for a Hungarian passport.

Poland wisely keeps its mouth shut as “the lawyer of Ukraine in Europe”. Although he claims for his Polish territories, he distributes passports, but he is afraid of radical nationalist Galicia.

But Freedom House fell off like a chain. Today, its president, David Kramer, expressed in an interview with Ukrainskaya Pravda several thoughts, which even in the eyes of ordinary people cast doubt on the adequacy of this specific organization, which only foreign agents, simply Ukrainian grant contributors, insist on its credibility.

Kramer’s opposition, on the whole, does not praise, hinting at its inability to control radical-minded citizens. But he does not scold, expressing impressive satisfaction with the “courage” of Vitaly Klitschko, who was not afraid and stood between the protesters and the police. “The key issue for the opposition is unification. They must show that they can become an alternative to Yanukovych. ”

Meanwhile, numerous, greedy for the body of Ukraine, European experts continue to analyze the behavior of the authorities and launder the “courage” of the opposition, which didn’t have the heart to honestly tell on the Maidan what exactly Yanukovych offered them and admit that they accepted the proposal at this meeting. Something was mumbled under the guidance of the cunning Poroshenko, who on a “mourning” day could not even wipe the fat smile from his face from the cat, who had deceived her grandmother into rewriting his apartment.

A few hours after the shameful Maidan performance in the news reported that Klitschko and Yatsenyuk (about Tyagnybok, of course, there was no talk) proudly renounced the premiership and vice premiership. One of the leaders of Deutsche Welle, Bernd Johann, today admires the opposition, which proudly did not accept Yanukovych's "poisoned proposals". "They did the right thing by refusing to participate in the government ", confident expert and believes that the only way out of the situation is early elections. Tymoshenko today also banned the opposition from accepting any worthwhile proposals. “The people of Ukraine went to the Maidans not for the sake of positions for opposition leaders, or even for the repeal of dictatorial laws. People want to change their lives. They will not have another opportunity. Politicians have not yet realized that people are ready to achieve goals at the cost of their lives and physical freedom. ”.

But Yatsenyuk and Klitschko are not fools at all, although they are weak. Refusing to post, they stubbornly refuse to pass a rapid test for their presidential suitability. They understand that it would be interesting for the “people” to look at Yatsenyuk, the prime minister, who is authoritatively and in detail analyzing the association agreement. Yatsenyuk-Prime Minister, who took loans from the IMF without freezing salaries, without increasing utility tariffs. Yatsenyuk-Prime Minister, who returned to Russia of her wicked billions. Klitschko, too, has never been seen by anyone in the case - and a year before the election he could convince all those who doubt that he, in general, is doing as well as Yanukovych. But the guys do not want to strain, because it will finish their "career" long before the elections.

The party of Navalny, the very manager, who lost the Moscow mayor’s office and failed the glamorous Marsh, also supported Euromaidan and the Ukrainian opposition. Ardent greetings of Russian losers to Ukrainian losers have already become traditional. "We believe that the movement of Ukraine to Europe does not contradict the interests of Russia, which should also move towards European values ​​... At the same time, the Putin administration’s policy towards Ukraine is aimed not at bringing people closer, but at bringing together corrupt clans, at making Ukrainian citizens and Russia treated each other with suspicion ", - broadcasts, in general, innocent appeal Navalny.

The hryvnia is falling. Kravchuk arranges a round table. Sister Levochkin Julia is re-elected a member of the PACE Monitoring Committee and appointed Treasurer of the Bureau of the European Democrats Group. In the columned hall of Kievrada proclaim the creation of the People’s Rada on the basis of the Committee of Self-Government of Kiev and for some reason post this news on the site of "Freedom". On Youtube, the embarrassment with the Pope, who praying publicly from the window of the residence for Ukraine, released two snow-white doves of the world, immediately attacked by a crow and a seagull, is shyly erased. Symbolically.

Ctrl Enter
Noticed oshЫbku Highlight text and press. Ctrl + Enter
We are
A great interview with Sergey Lavrov: about Ukraine, Obama and IranInterview of V. Putin to Channel One and the Associated Press Agency
Military Reviewin Yandex News
Military Reviewin Google News
73 comments
Information
Dear reader, to leave comments on the publication, you must sign in.