January 28 2014
11
In mid-January, it became known about a change in shipbuilding plans and the Ministry of Defense regarding the new minesweeper of project 12700 Alexandrite. According to recent reports, the lead ship of the BT-730 project will be accepted into the naval fleet Russia in the next year, 2015. Previously, it was assumed that this ship will begin its service before the end of 2014, however, some difficulties led to a shift in terms. 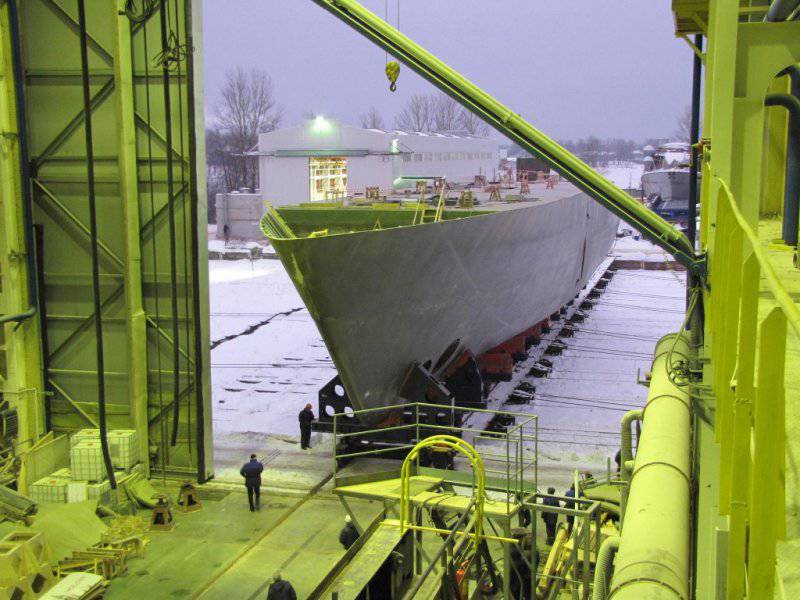 Translation of the formed hull of the under-construction head minesweeper under construction, 12700 Ave. (head number XXUMX) after removing the matrix to the outfitting workshop of Sredne-Nevsky Shipbuilding Plant OJSC to continue construction. St. Petersburg, December 521 (photo - http://snsz.ru/ via http://bmpd.livejournal.com/)

According to Izvestia, the test dates for the first ship of the 12700 project were shifted due to late financing. According to the Izvestia source in the United Shipbuilding Corporation, the earlier deadlines could be respected subject to timely transfer of money. If the necessary funding came before the end of last year, the shipbuilders would be able to complete all the necessary work in accordance with the established schedule. Now, the test and transfer of the ship to the navy will begin no earlier than the end of 2014.

According to reports, from April to September 2014, it was planned to conduct sea trials of the lead ship Alexandrite, as well as measure the level of noise and vibration of the hull. Due to the problems of organizational and economic nature, these works will begin several months later. In addition, as they say, "Izvestia", changed the location of the test ship. Minesweeper BT-730 will be tested in the Baltic Sea. While continuing to equip the ship with the necessary equipment. All the necessary systems were supplied by related enterprises earlier, but their installation has not yet been completed.

The construction of the head minesweeper of the Alexandrite project, 12700, constantly encountered various difficulties. As a result, this led to significant shifts in the timing of the execution of certain works. The laying of the lead ship took place in September 2011. It was originally intended to launch a new ship into the water in the 2012 year, and in the 2013-m to take part in the Navy. However, for several reasons, the construction of the ship BT-730 was delayed, which is why it has not even been launched yet. 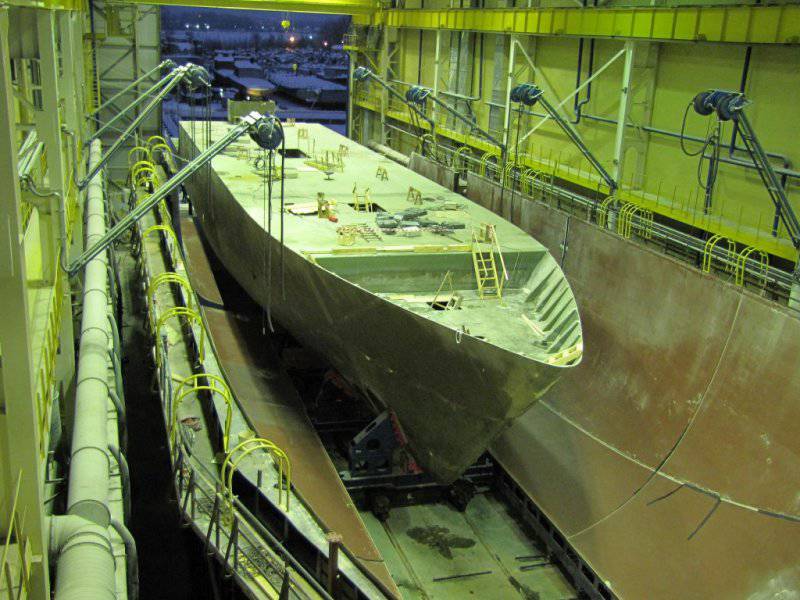 Removal of the matrix from the formed hull of the head base minesweeper under construction, 12700 Ave. (serial number 521). JSC "Sredne-Nevsky Shipbuilding Plant", St. Petersburg, December 2012 (photo - http://snsz.ru/ via http://bmpd.livejournal.com/)

The timing of the project was primarily affected by its technological complexity. For the first time in the domestic practice, the hull of the first minesweeper Alexandret was made of fiberglass by the method of vacuum infusion. This technology was developed by the Central Research Institute of them. A.N. Krylov and Central Research Institute of Structural Materials "Prometheus". The hull of the BT-730 is a monolithic fiberglass part of 62 meter length, 10,2 width m and 8,5 height m. At present, the hull of the head trawler of the 12700 project holds the record - it is the world's largest monolithic piece of fiberglass ship. Probably, it is the complexity of manufacturing the hull led to a change in the timing of construction. The hull formation was completed only at the end of the year 2012.

Fiberglass housing, despite the complexity of manufacturing, has several advantages over steel. With the same size, it turns out lighter and stronger, and also has a higher survivability and service life. Finally, in the case of minesweepers, the use of monolithic fiberglass hulls allows you to make the ship "invisible" for sea mines with a magnetic fuse. Another way to reduce the visibility of the minesweeper for mines used in the Alexandrite project is to install some noisy aggregates on shock-absorbing bases that absorb vibrations. Currently, the installation of various components and assemblies on similar devices continues. During the tests, the ship will be checked for noise. 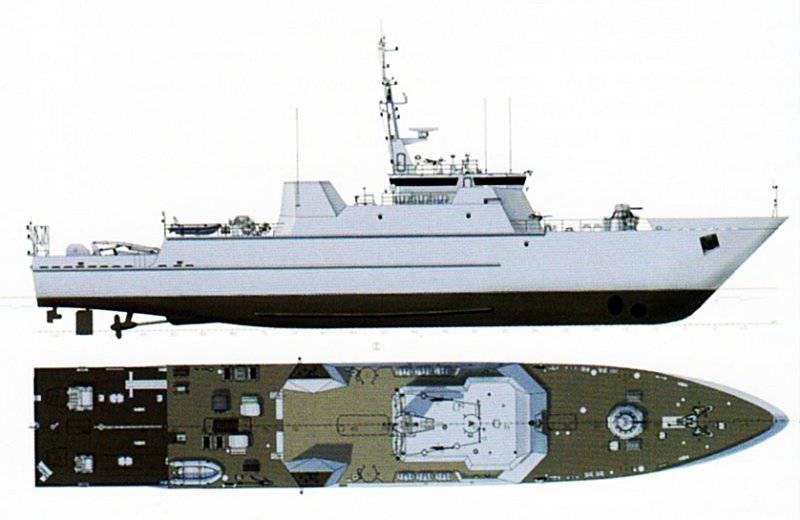 Projections of the base minesweeper pr.12700

According to reports, the minesweeper BT-730 has a total displacement of 800 tons. The ship is equipped with a hp 2500 diesel engine. The project provides for the installation of four diesel generators on the ship: two 315 kW and two 210 kW each. The minesweeper project 12700 will be able to reach speeds up to 15 nodes, and the cruising range at economic speed will reach 1500 miles. Declared autonomy - 10 days. Crew - 41 man.

For self-defense minesweepers "Alexandrite" will receive barrel and rocket weapons. This is one AK-306 artillery unit with a six-barreled automatic caliber 30 mm and one pedestal unit with a 14,5-mm machine gun KPV. In addition, if necessary, the crews of the ships will be able to use portable Igla anti-aircraft missile systems. According to reports, the 12700 project minesweepers will be able to install barriers using various types of sea mines.

The ship BT-730 should receive a complex of various equipment designed to search and neutralize mines. It includes an under-hook hydroacoustic station, a towed station, single and twin contact trawls, a broadband acoustic trawl, and a trawl simulator. The management of all mine action weapons must be carried out with the help of a single combat information and control system.

As follows from the latter News, now continues to equip the lead ship of the project "Alexandrite" with all necessary equipment. By the end of the year, the minesweeper will be launched and completed at the quay wall of the plant, after which its tests will begin. If the work schedule is not changed, the Russian Navy will receive a new minesweeper as early as next year. In addition, the construction of the next ship of project 12700 may begin in the near future. It was previously planned to lay the first production ship in 2013, but problems with the head minesweeper, apparently, forced shipbuilding and the fleet to postpone the start of its construction.