January 28 2014
331
Recently, the attitude towards the representatives of law enforcement agencies on the territory of the republics of the former USSR (with some exceptions) on the part of the public has often been negative. This is confirmed by the numerous results of public opinion polls conducted by analytical research centers. And if you believe such polls (and believe them or not to believe - this is a private matter for everyone), then the least trust in law enforcement forces is shown by the public of such countries (in the former Soviet Union) like Belarus, Ukraine and Russia. The fact is sad, but the image of a policeman (police officer) over the past 20-25 years for many is strongly associated not with the protection of the rule of law and the security of the state from real internal "destructive elements", but with inertia, corruption and other negative phenomena.


Are these accusations against law enforcement officers? Unfortunately, due to the fact that information about, excuse me, “black sheep” and “werewolves” in shoulder straps in modern media, social networks, blogs and other media platforms is being discussed more often and is much more actively savored than information about those whose merit in fact, they are worthy of public attention and admiration, and a situation arises in which the negative in this matter suppresses the positive. This does not mean in any way that our police (militia) is crystal clear in all respects, but it doesn’t mean that only hard-headed ignoramus who are only able to sit in their offices and extort bribes from law-abiding people serve in the police (militia) citizens. As in any matter, the extreme here gives rise to strange forms, for which many representatives of the above-mentioned public hold on with all their strength, despite the absurdity of such a situation.

Are there today those representatives of law enforcement agencies who, by their daily work, prove that they are ready to stand up to the last in the position of the protection of legality? It’s impossible to count such representatives over the entire post-Soviet space, but it’s not necessary, but it’s realistic and necessary to single out those who have recently really had to risk their own lives (or at least their own health) by fulfilling their professional duty to end. It's about the divisions of the Ukrainian "Berkut", the fighters of which had the most difficult task - in the conditions of outright indecision of the Ukrainian authorities to become de facto hostages of the situation. The words about the professional duty of “Berkut” may seem to someone to be completely superfluous pathos, but this is understandable - lately a circle of gentlemen has been formed, to whom any normal performance of professional duties by any representative of the authorities seems to be something out of the ordinary ", Something" foul-smelling "and certainly" deceitful. "

So is there a lie in the actions of the "Berkut", is there a lie in the actions of other representatives of law enforcement agencies who conduct their work on the "Maidan" throughout Ukraine? If someone has an opinion about lies and betrayal, then he can safely put himself in the place of an ordinary soldier of the Ukrainian special unit of the Ministry of Internal Affairs of Ukraine or an employee of the Internal Troops, who are forced to face daily thugs financed from “certain centers”, trampling the constitutional order according to the prepared scenario the state and the choice of the majority. 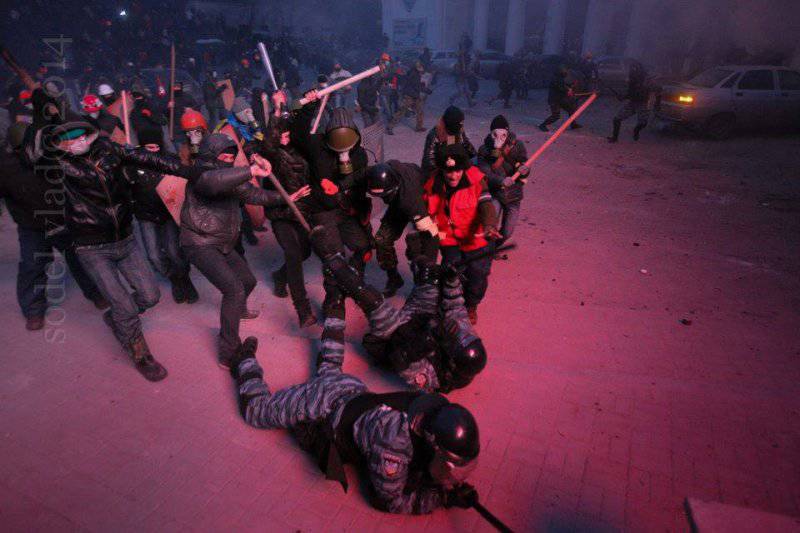 January 16 "Berkut" celebrated its 22 anniversary. However, the birthday of "Berkut" today is clearly not called cloudless. It has never been so close to the point of artificial collapse. Today it is perhaps the most efficient units of the Ukrainian Ministry of Internal Affairs. It is due to the fact that the fighting capacity of the Berkut and the rich arsenal of this law-enforcement structure are very high, so to say, someone is not satisfied with the presence in Ukraine not only of the Berkut itself, but also of the entire formed MVD system.

Since the end of last year, a deputy group has manifested itself in the Ukrainian parliament, which openly declared the need to disband the existing structure of the Ukrainian Ministry of Internal Affairs, having carried out the reform. One of the main points of this reform was as follows: to dissolve the “Berkut”, imposing a ban on the further activities of this special unit with the deprivation of the ranks and regalia of all its employees (from private to general). This position was taken, for example, by Arseniy Yatsenyuk, who, after Viktor Yanukovych’s proposals, may well turn out to be the Ukrainian Prime Minister ... Whose tasks (really national and state?) Are fulfilled by the potential head of the Ukrainian government, who is going to dissolve the most capable unit for ensuring internal security of Ukraine ? An adherent of the theory of the prohibition of the functioning of the "Berkut" is such a gentleman as Verkhovna Rada deputy Gennady Moskal. Apparently, a person in modern Ukraine was not lucky with the name, and now he decides to work out the “eurodirection” in other ways. Moskal's metamorphoses are especially surprising due to the fact that he himself graduated from the Academy of the Ministry of Internal Affairs of the USSR in his time, passing the career ladder in law enforcement structures from a regular inspector to the head of the State Department of the Ministry of Internal Affairs of Ukraine in Crimea, Dnipropetrovsk region (not to mention civilian positions - the governor first Transcarpathian and then Lugansk regions). Recall that such proposals (proposals for the disbandment of the special units of the Ministry of Internal Affairs) sounded precisely when the “Maidan porridge” was brewed. That is, Yatsenyuk, and the same Moskal, a priori, signed that they wanted to inflict an anti-government coup without any opposition from law enforcement officers who are called upon to defend the constitutional order.

To date, the total number of employees of special forces "Berkut" is about 3200 people. And, apparently, this is not such a great number - 3200 combat-ready law enforcement officers - a hefty bone in the throat for those who want to put Ukraine into a Yugoslav or Libyan corkscrew.

Today, the world media literally savor the episodes, when the fighters of the “Golden Eagle” go to the “maydanutye”, stubbornly failing to show that the “maydanutye” themselves are undertaking the “Berkut”. Special Forces officers, forcedly holding back their true potential, are confronted with real extremist aggression by the befuddled ridiculous calls of the crowd. The crowd consists mainly of nationalist "thugs", infinitely distant from political and economic reality. 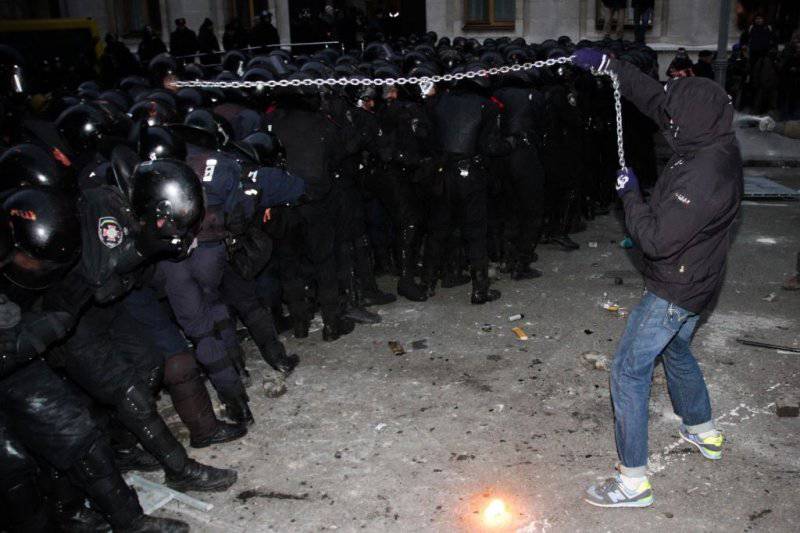 But the same world media stubbornly do not want to show footage of staff members of Ukrainian law enforcement officers burning alive, footage with their pierced helmets and bloodied faces of Berkutovtsy. Such cadres are simply “not formatted”, so that a western man in the street suddenly doesn’t realize who actually opposes the militia units in Ukraine today, and that he suddenly didn’t suddenly sympathize with “Berkut”. The information war has long entered a phase in which interested persons must, by all means, expose the Ukrainian special forces of the Ministry of Internal Affairs as such monsters crippling “democracy” at the behest of Yanukovych. In London, Berlin or New York for the world media this would be “law enforcement officers”, “defenders of democracy”, “suppressors of extremism”, and in Ukraine only “bloodthirsty monsters” trying to crush “popular opinion” ... 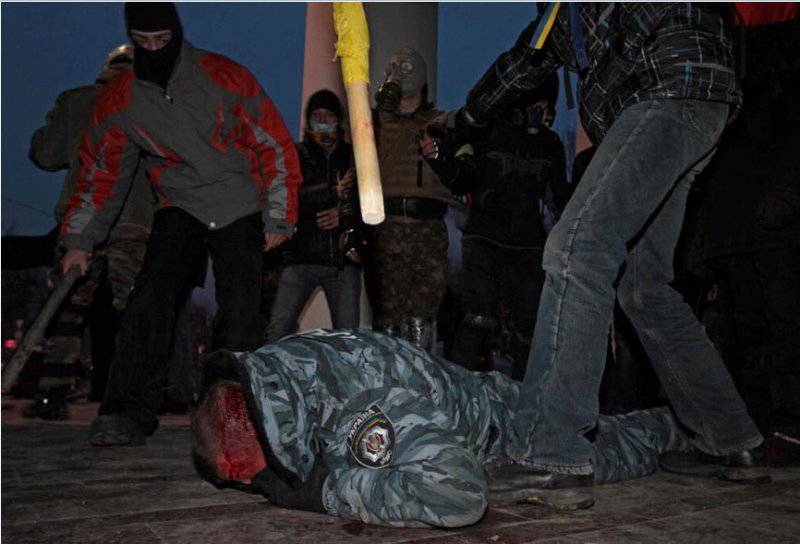 Adds fuel to the fire is also the old problem of Yanukovych - the desire to please everyone and sit on several chairs, today putting the same "Berkut", the same Internal Troops of Ukraine in a strange position. The people who took the oath turn out to be, in fact, substituted by state authorities - they say, you can deal with this “maydanutya” mass there, and we will look at the one whose ultimately will take to make the necessary decisions ...

The prosecutor’s office examines the actions of the “Berkut”, the deputies of the Rada are “concerned” with their actions, the actions of the “partners” are “worried” ... What nonsense? What kind of phantasmagoria? Perhaps it was the first Ukrainian militia special forces who went outside, began to smash houses, shops, offices, stadiums, burn fires, seize government buildings, smash monuments, defecate on bridges or even tables in administrative offices, disrupt the work of government bodies. Perhaps, this is a hypothetical ordinary Matveychuk or Kutko called on the crowd to block the president, rush into the buildings of the regional administrations, actually seizing power and planting their orders by a frankly barbaric method ... What does the prosecutor's office analyze? Could it be that the special forces fighter, who had been pulled out of action, tore off his helmet and started beating with wrought-iron shoes, suddenly answered with a precise blow of a rubber stick on the kidneys of one of the protesters? And what should he do in this case? Sniff daisies? .. Beat yourself with a fist to the jaw? ..

In this regard, we can definitely say that people who are doing their duty to the end, defending the honor of Ukraine and the honor of the uniform today, apparently, are not in fashion. Not in fashion - in the information (media) plan. In Russia, “swamp democracy” at one time tried to implement a similar plan, but only having broken teeth, quickly realized what and how ... Now the underfulfilled scenario from external "well-wishers" from Russia went to the Ukrainian territory, where the authorities, without taking any sensible actions give him to reach its climax. What is this feature? Two Ukraine, three Ukraine, ten Ukraine? .. 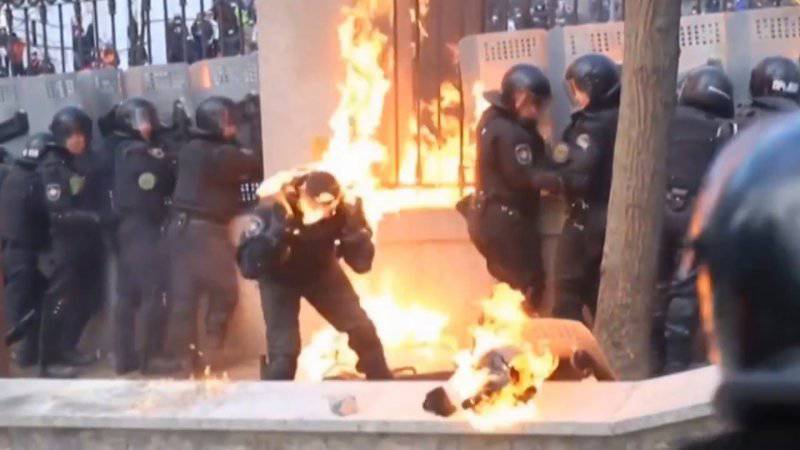 PS Photos in which the "Berkut" attacks "innocent demonstrators" in Ukraine, in the world media and various blogs, there are much more of those that capture the innocent attacks on the "Berkut" itself. Maybe the attacks "Berkut" is really more? But let's not be so naive ... The information trend is now different - it’s necessary to worry about “Instagram” and other “Twitter” with “Facebook”, and then the blood of “demonstrators” from the hands of law enforcement officers is absolutely necessary ...

Ctrl Enter
Noticed oshЫbku Highlight text and press. Ctrl + Enter
We are
Situational analysis of the death of the MH17 flight (Malaysian Boeing 777), made on the basis of engineering analysis from 15.08.2014Police mayhem as a threat to the security of Russia (Poll)
Military Reviewin Yandex News
Military Reviewin Google News
331 comment
Information
Dear reader, to leave comments on the publication, you must sign in.