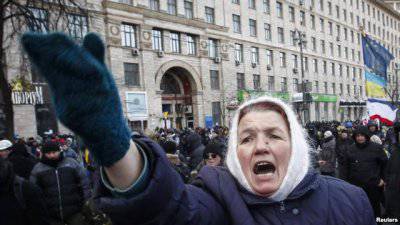 I tried to write this article several times, but I put it off all the time, thinking that what I see on the Ukrainian TV channels is only of a spontaneous nature or is a version of a single journalist. I respect the opinion of another person, even if his opinion does not coincide with mine. But, unfortunately, every morning, including the TV, I am convinced of the systematic nature of the impact that Ukrainian TV channels now have on television viewers. There is an information war. The so-called entertainment and information TV channels are in essence entertainment and propaganda. Not to be unsubstantiated, I will give an example of plotting on the 1 + 1 channel from 6: 40 to 7: 10 27 January 2014 in the program “Snidanok з 1 + 1”. In brackets, I will comment on the message that the channel is trying to put in their stories.


So, turning on the TV in 6: 40, I saw a series of plots about the Maidan, accompanied by commentaries by the presenters: “We were just informed that there was a beating of journalists there. Unknown threw stones at them, etc., ”or“ There the peaceful demonstrators were severely beaten by the Berkut. Leading with a pile of newspapers in their hands told how negatively assess the actions of the authorities in Germany and in other foreign countries. Then they showed the funeral of the “hero” carried in their arms, the coffin is covered with a red and black flag, people shout: “Glory to the heroes!” They told about the memorial service in the St. Michael's Cathedral over the murdered.

Then, apparently, having decided to show the “nationality” and humanity of Maidan, they showed the story about his women (women are mothers, this is holy! Look!), They showed the hard life of Maidan, how women prepare food, drag “berkutovtsy” away from demonstrators , provide medical care. Then, again, apparently deciding to show the internationalism of Maidan, they showed some novice singer from Russia, who, having started the conversation in Ukrainian and continued in Russian, told what all the heroes are here, and about the popular Maidan's joke, from which Maidan all with higher education, and "cattle" uneducated in the form of "Berkut" is trying to destroy freedom.

Then, apparently deciding to demonstrate what the “simple but highly educated people” are fighting on the Maidan, they showed the story of a woman who sits with her family without heat in her own apartment. (Such a fine analogy!)

And where is the story about the main potential enemy, you ask? And here he is. A series of “entertaining” plots went on, in which they showed a snapshot of two toilets in one toilet room from Sochi for the Olympians - the same one that had been “eaten away”, “sucked” and laid out on the Internet for a long time (they say, where is Russia with its own tips , they are disgraced, they cannot “push” normally, forgetting to say that the photo was taken at the time of the repair, and on the wall there are clearly visible traces of the removed partition.

Further, following the logic of modern TV channels, you need something neutral. Here is a story about birds, in which a bird began to peck at a disguised camera (how touching!)

Then - secular news about the wedding of children of Lytvyn and deputy of the Party of Regions Derkach, who played the wedding in Kiev to the songs of Kirkorov. For 5 minutes before the plot, the text about this was a line during the story about the hero's funeral (the message is: “Aww, ay, here are radishes, Maidan is fighting heroically, and you made a feast during the plague! Even under Kirkorov , moreover, Malakhov and his wife were invited! Ah, ah, not good ... ”)

Then, apparently deciding not to be distracted from the topic, they showed the plot of the pianist in a mask with a closed face on the Maidan, who supports Protestants with his music (see, here he is an intellectual, a creative person, a romantic revolutionist Che Guevara and Tchaikovsky in one a bottle!) And they did not forget to mention that on the Internet some user from Europe commented this on “Otaki on Maidani - Extremisty” (“These are extremists on Maidan”). It was said with warm irony, they say, look, what gentle, creative people special forces beat.

Where are the kids? Well, without them: they reported the victory of a young 16-year-old tennis player in duplicate with a Russian tennis player at the Australian Open. Here it is, clean and promising youth!

Well, enough distractions, we decided on the channel, and launched the news story. In which they showed how law-enforcement agencies were mobilized in Donetsk, told about the future rally in support of the president, and of course, interviewed people. They showed how the Crimea and other areas are mobilized, they again interviewed. We tried to interview the “aunts”, who defended some kind of administration with cudgels. It seems to be everything and nothing, but in the “titushki” report all run away from the camera, and all opponents of Maidan speak Russian (!), Exclusively in Russian (all the “heroes” are avzhezh, in Ukrainian). And interviewed something from ordinary people. One woman said that she would have blockaded this Maidan, like the Germans, Leningrad during the Second World War, and would have blocked all the provisions of the Maidan. Another, stumbling, said that we want to live a normal life on our land, and that the Maidan must be stopped, and on objection: “But they too live in Ukraine,” could only squeeze out of themselves: “So what?” . Apparently, interviews were chosen by professionals who had passed several internships abroad. From the “heroes” they show people of different ages with a bias towards youth, and from opponents - people who are over 50 years old. (Here you have an unspoken opposition: young heroes with higher education, romantics, patriots of Ukraine against Russian-speaking tired "sovok" who can not squeeze a word, are not capable of dialogue, and can only blockade and destroy the peaceful demonstrators).

Then they showed (as without him!) Zhirinovsky who, as he can, charged about the events and sent them all to live in Lviv (they say, look, people who are in power in Russia, Putin’s hawk, hungry for the blood of demonstrators and the Ukrainian eastern and southern lands!)

On this I turned off the TV and took the child to school. I just want to warn you that I didn’t accurately describe everything shown, but I singled out the main thing. And this is repeated constantly, every morning, several times a day. The scheme is the same: demonstrators and the press are beating (aggravating the situation) - the heroes of Maidan (steadfastness) - comments from the Western press and politicians (the West will help us!) - fleeing "titushki" and silent "Berkut" ("radishes" in the service of the authorities) - plot about a bad housing situation or about something similar in Ukraine (they say, brought the country, reptiles!) - children (childhood, which bad uncles want to take away) - opinion from Russia (insidious enemy). And everything repeats every morning several times. All of this may be accompanied by “diarrhea” from verified and unverified information about Russian special forces in Ukraine, beating up of journalists (as if not regional demonstrators, but demonstrators are storming regional administrations, but journalists), etc.

I also noticed the following. There is one presenter of the news block, whose tone is to start talking about the reaction of the Russian leadership to the events in Ukraine, clearly perplexed. And having finished the news, she constantly smacked hers, they say, well, what about taking fools, they don't understand us.

Here you have impartial coverage of events. And now the most important thing: during the Maidan through the channels of advertising does not stop. And it is very dissonant against the background of “disturbing news”. A revolution is a revolution, but money loves to count money. So here! Who does not believe, find this channel on the Internet or on satellite television, and watch the morning program.

I warn you right away, I am not a journalist. I wrote what I saw, only from my own point of view, completely free. I do not like to eat everything that they try to feed me without chewing. And especially when they want to feed me with such propaganda vinaigrette. I understand this: if the channel is informational, then it must submit information impartially and cover it comprehensively. And when one of the leading channels of the country shows this, it causes a reflex aversion, after which you begin to think about many things.

Ctrl Enter
Noticed oshЫbku Highlight text and press. Ctrl + Enter
We are
What you didn't want to know about EnglandWho will be the next victim of destabilization in the Middle East?
Military Reviewin Yandex News
Military Reviewin Google News
114 comments
Information
Dear reader, to leave comments on the publication, you must sign in.