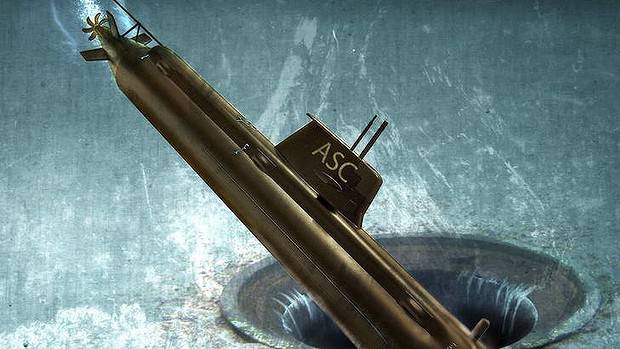 The plans of the Australian Navy for the construction of new submarines are a grandiose farce worthy of mention, author of the Sydney Morning Herald Paul Sheehan writes in his column. In his opinion, the military, bureaucrats and trade unions intend to suck out from a multi-billion dollar project everything that is possible, leaving the fleet without combat-ready ships. An interesting Australian example of well-known issues and discourse, which usually seems to be typically Russian.


A great and terrible budget is coming — one that will make all political debates since the days of federal elections an episode of a typical comedy series about anything. It is strange that as the new government sculpts its first budget, and the National Audit Commission sets the stage for it, one of the largest, most inefficient, most wasteful and meaningless programs is not even mentioned. She can be said to have gone deep and hid.

Not a word slipped about this gilded thirty-billionth "pipe".

The only sign that Tony Abbott’s government was going to somehow resist the impending exorbitant, unforgivable financial black hole was the statement that former MP Sophie Mirabella would become a member of the board of ASC Pty Ltd, formerly known as Australian Submarine Corporation.

ASC - hopeless seriously ill. The trail that stretches behind her is a series of costly failures. It cannot be reformed, does not deserve to be saved, and must be destroyed before it inflicts even greater damage on the country's national security.

However, the Royal Australian Navy reckons that ASC will be the general contractor for the most expensive defense project in stories Australia - a project of a promising submarine, in which a dozen new submarines are supposed to be produced in South Australia to replace the submarines of the Collins class, another brainchild of a locally-made financial-exploitative black hole.

The fact that the military bureaucrats generally brought this plan to political discussion shows how deeply rooted in the Australian Armed Forces are the illusions and arrogance.

The cycle of absorbing huge means of self-reliance works like this. Techniques that would fit local conditions are not available. Therefore, the arms management must develop tender specifications that meet Australia’s armament needs. Further, the local military-industrial complex to order produces a small amount of expensive military equipment, which is supposed to be the best in the world.

In reality, for decades, the military-industrial complex has spewed out a “gold-plated” equipment that requires high operating costs, which is not worth even half of the money spent and the hype surrounding it. Whatever she thinks of Mirabelle, she looks at the economic side of the matter soberly and does not cover up the dirty work of the wasteful, quarrelsome officials, military and trade unions, who are unanimous in their perception of the Australian Submarine Corporation and the arms control as a giant feeder.

Both organizations have strong immunity to competence. In 2011, the Labor government commissioned an audit of the Navy procurement process. He identified a messy maze that generated cost spikes and chronic delays. In the same year, when the cyclone Yasi deflected the coast of Queensland, the Navy received SOS signals, but could not send a single ship to help. All three large landing ships were in disrepair, and two of them were so unsuitable for navigation that they never returned to service.

At the same time the fleet also had six large landing boats at a price of $ 40 million without even starting operation, because, as it turned out, they could not be placed at the floating bases for which they were purchased.

Shadow Secretary of Defense, David Johnston, described all of this as “an absolutely living, walking and breathing example of incompetence.” Now at the post of Minister of Defense, he is responsible for all this flotilla of idiocy.

The minister should be aware that the military is just as dupusive as they themselves are in error. The culture of bullying and oppression, which they have closed their eyes for decades, is direct evidence of this. The Strategic Review of Naval Equipment, prepared at 2009, contained sharp criticism of the ability of the Navy to maintain ships in combat readiness. This report from the then minister concealed.

The idea that Australia should produce a dozen submarines worth 3 billion per ship is sheer insanity. One has only to look at the Collins class submarines. They were built in South Australia by the Australian Submarine Corporation at a cost of about a billion dollars per boat — much more expensive than originally planned. For all the time in the service has never been at the same time more than two of the six submarines.

The price of one new boat will be cyclopean relative to the Collins class boat, if you build new ships in Australia, and three times more expensive than if you buy them abroad. The fleet is trying to refute this prediction, but history itself is evidence in its favor.

The ambitious South Australian submarine project is an overwhelming relic of Premier Kevin Rudd’s pompousness. The government will save more than 20 billion dollars if it reduces the scope of the project to an adequate scale and orders its implementation abroad.

It is worth taking a look at the already existing large naval project, the air defense destroyer program, to see how costs can rise and unforeseen difficulties arise. Each year, the next purchase turns into a disgrace. This year, this supply ship Sirius, commissioned in 2006 g. It will be written off after only eight years of operation, because it is not able to perform its functions at any significant sea state.

The Australian defense department stubbornly remains focused on large military equipment, while national security is increasingly determined by the problems of asymmetric warfare, cyber security and intelligence gathering. The new improved approach to military security requires more intellectual effort than the big boys with big toys. In our case: with very complex, noticeable, extremely vulnerable and very, very expensive from a distance - and it is precisely when computer programs rule everyone.

Ctrl Enter
Noticed oshЫbku Highlight text and press. Ctrl + Enter
We are
Results of the week. "Either true or all is well"
Military Reviewin Yandex News
Military Reviewin Google News
4 comments
Information
Dear reader, to leave comments on the publication, you must sign in.