The 6ВХNUMX (АВВК) sniper rifle of the 7С6 complex was developed by a team of designers from the Degtyarev Plant (ZiD) located in the town of Kovrov. A group composed of A. Namitulin, N. Obidin, M. Kuchin, E. Zhuravlev, Yu. Bogdanov and V. Zhirekhin, under the leadership of V. Negrulenko, began work on a new weapons back in 1997 year. Then the rifle under development was assigned the SVN-12,7 index (Negrulenko sniper rifle), which was soon replaced with the SVN-98. For accurate shooting, regular 12,7-mm cartridges of BZ and BZT did not resemble, as a result of which a special sniper cartridge was developed. It is worth noting that the creation of such a sniper complex was not due to "tribute to fashion", but a thorough study of the combat experience gained during combat and antiterrorist operations.

In 1998, the weapon passed the necessary complex of tests, including in combat conditions, but it was not accepted for armament and was not mass-produced. According to the test results, the ZiD management decided to further refine the EHV sniper rifle.

Unlike all previous designs of domestic sniper rifles of those years, made automatic, large-caliber sniper rifle EHV had manual reloading. Accordingly, the trigger mechanism allowed firing only single shots. In addition, in order to ensure minimum dimensions in length, the designers decided to use the bullpup layout scheme, although this scheme had not been used in the construction of large-caliber sniper weapons before. The total length was reduced to 1420 mm, while similar samples created by the classical scheme have a length of 1700 mm and more. The mass of the IUH was also significantly less than the mass of domestic and, especially, foreign analogues, in which, as a rule, it exceeds 20, and even 30 kg.

In the process of improvements, the sniper rifle received a new designation KSVK (Kovrov large-caliber sniper rifle), and then ultimately - KAFK (large-caliber army sniper rifle). Structurally, it is a 5-charging magazine rifle with a longitudinally sliding rotary bolt, arranged according to the bullpup scheme. Submission of ammunition when shooting is made from the detachable box magazine, the receiving neck of which is located between the pistol grip with a trigger mechanism and the butt. The butt plate is equipped with a shock absorber made of porous material, which significantly reduces the impact on the shooter’s shoulder. On the top of the receiver has a wooden lining - "cheek". Release of spent cartridges to the right through a special window in the receiver, which in the stowed position is closed with a lid.

The barrel, made by cold forging, "floating" type - is fixed console in the receiver and does not come into contact with other parts of the rifle. The trunk has a powerful slotted muzzle brake of rectangular section, which reduces the recoil force 2,5 times. The design of the muzzle brake in the process of finishing changed several times, initially it had a cylindrical shape. When shooting, folding bipods are used, which are attached to a special stem of the receiver.

Sniper cartridges 7H34 are used for shooting, but if necessary, any standard cartridge caliber 12,7x108 mm can also be used. The energy of an ordinary B-32 bullet is quite enough to penetrate a regular army body armor at maximum range - up to 2000 meters, although the stated target range is 1500 m. At short ranges (up to 1000 m) the same bullet can hit any lightly armored targets. When the rifle was tested before the appearance of a special 12,7-mm sniper cartridge, the average dispersion width was approximately 160 mm at a distance in 300 m.

The rifle is equipped with mechanical sights, including a folding front sight and rear sight. In the original version (SVN-98), the sights were fastened on a special aiming bar, which could also be used as a handle for carrying a rifle. It also installed an optical sight. When refining, such a design solution was refused, with the result that a guide for mounting optical sights was installed directly on the receiver on the left, and a carrying handle was placed on the right in front of it. For shooting can be used standard daytime optical and nighttime electronic-optical sights of domestic and foreign production.

In terms of accuracy and accuracy of shooting, a large-caliber sniper rifle, not only surpasses all known counterparts from South Africa, the United States and even from Russia, is almost as good as standard 7,62 and 9-mm sniper rifles. As for reliability, this indicator is not lower than that of the famous AKM, and the warranty resource is at least 3000 shots.

The 12,7-mm sniper complex, which has already received the official designation 6-8, highly recommended itself, having been severely tested in combat conditions in the counter-terrorist operation Chechnya, where it, along with other samples of large-caliber sniper rifles, was used by GRU and MIA special-purpose units. Despite the rather harsh operating conditions, the AFKK rifle demonstrated high reliability, excellent accuracy and accuracy of fire. 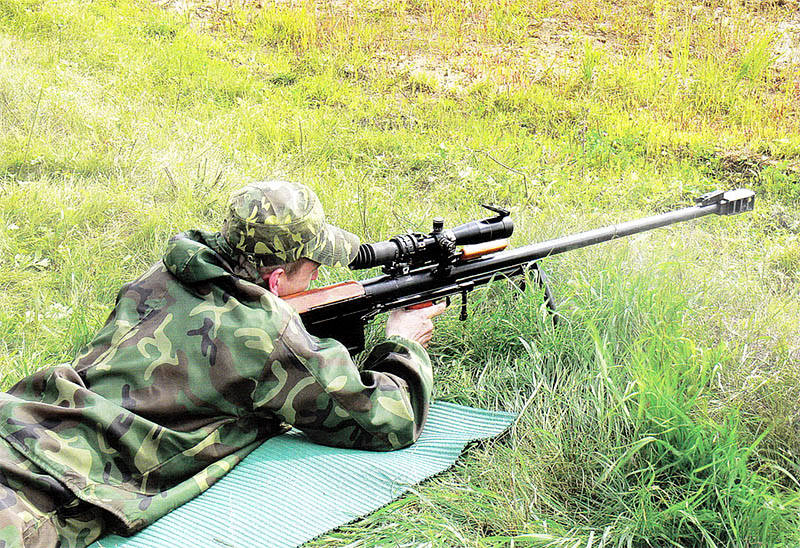 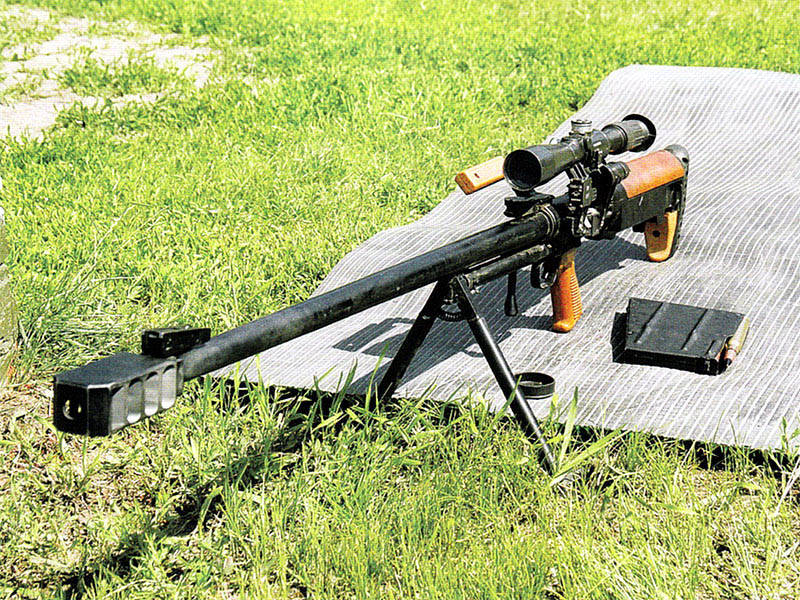 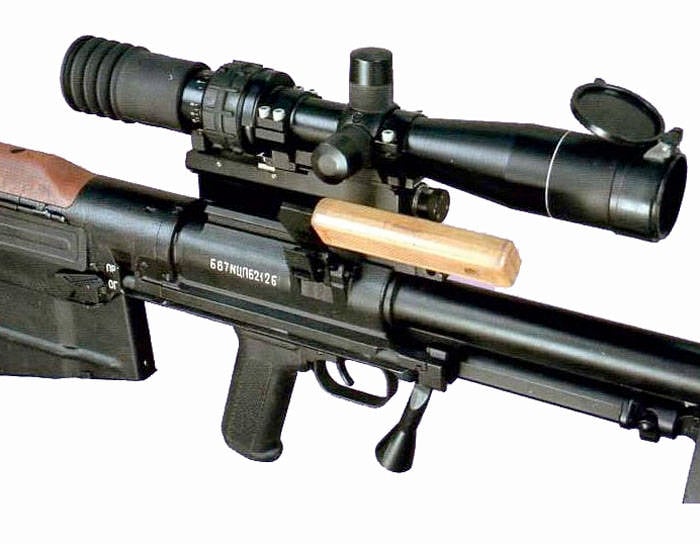 View of the receiver box and the scope of the rifle ASVK. To the right of the sight - carrying handle 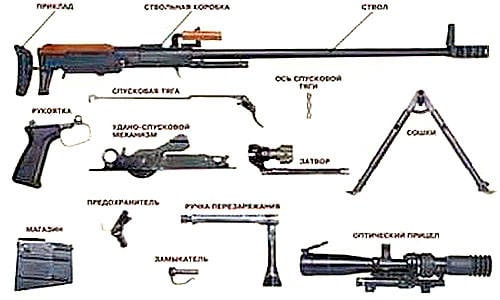 Sniper rifle SVN-98, on the basis of which the sniper complex 6С8 was created 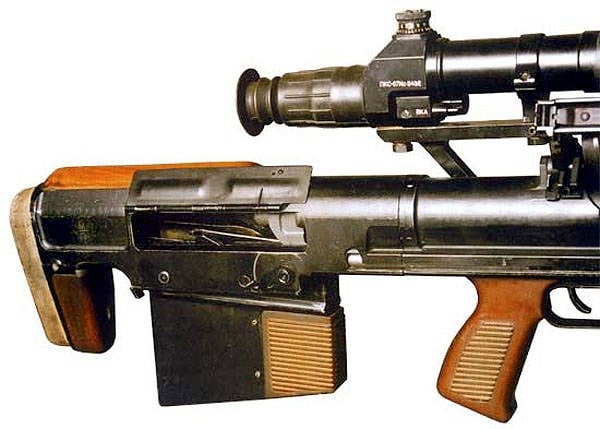 View of the receiver box SVN-98. The store has a pad for use as a stop by the shooter. The sight is mounted on a special handle bar. 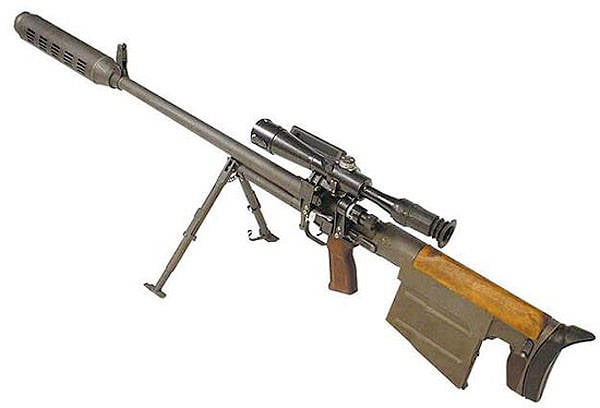 KSVK sniper rifle. It is almost identical to the one adopted by the ARMS, but has a different muzzle brake 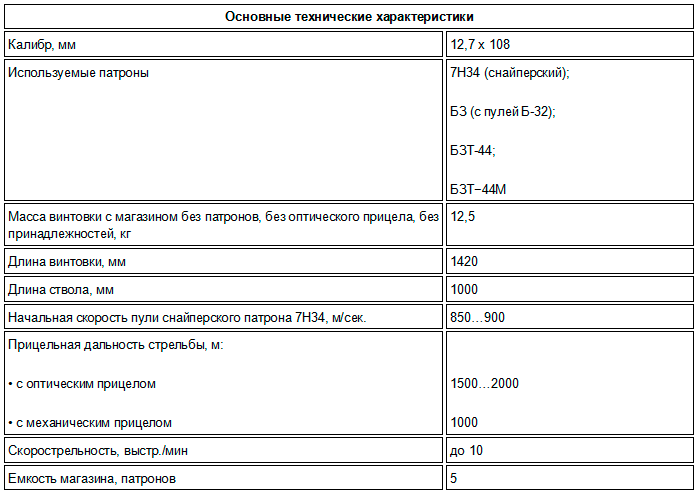