Russia is preparing to send three spacecraft to the moon

January 27 2014
62
Russia is preparing to return to a large space race by launching three new spacecraft intended for the study of the Moon. The first stage of this space program is currently being implemented. Funding is under way for the creation of the first three spacecraft, which will receive the designations “Luna-25”, “Luna-26” and “Luna-27”, Russian Interfax news agency reports, citing Lev Zeleny, who holds the post of vice-president of the Russian Academy of Sciences, as well as being the director of the Space Research Institute. The new Russian vehicles will continue the baton of Soviet satellites, which were used to survey the moon. Hence their ordinal notation.


During the time of the USSR existence, two moon rovers were sent to the Moon, which successfully worked on its surface, and also three automatic missions were carried out, which delivered samples of lunar soil to our planet. At the same time, in the USSR, all studies on the natural satellite of the Earth were halted in 1976 year. Since then, domestic spacecraft have not flown to the moon. Despite this, Russia is ready to re-launch its own lunar program, sending three different spacecraft to our satellite at once.

The last domestic device that investigated the Moon is the automatic interplanetary station (AMS) "Luna-24". This unit was launched on 9 August 1976. Already on August 13, the AMC went into orbit of the moon, and on August 18 made a soft landing on its surface. The mission of this spacecraft was to conduct sampling of lunar soil. The drill module installed at the station went deep into the lunar soil to a depth of 225 centimeters by taking it. The day after that, the take-off stage sent the samples back to Earth, the landing of the module with lunar soil occurred in the Tyumen region 22 August 1976 of the year. 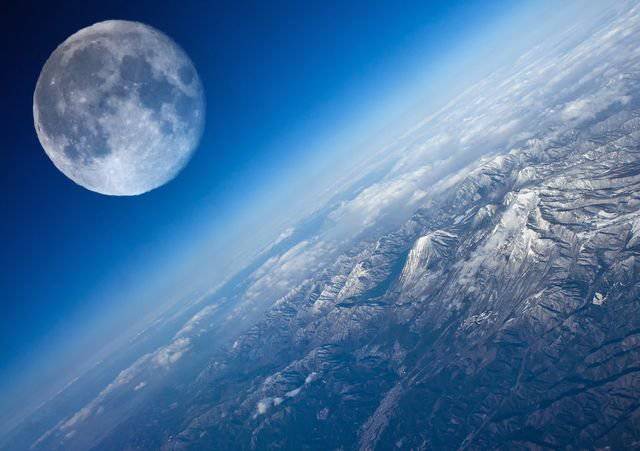 Remarkable is the fact that after the "Moon-24" earthly apparatuses did not land on the lunar surface for long 37 years. Interrupted this "lunar lull" the first Chinese lunar rover called "Yuytu" (Jade hare), landed on the moon 14 December 2013 of the year. The first tasks of the device began to perform 22 December, and 25 December for a period of moonlit night, he was put into sleep mode. Having successfully survived the moonlit night, the 11 moon rover of January was again activated, but already on January 25 a number of faults were detected in its work. Because of this, the Jade Hare was again put into sleep mode. For this reason, the success of the PRC's lunar program is currently under question.

As Leo Green notes, the Luna-25 and Luna-27 spacecraft will have to land on the Moon, and the Luna-26 will be put into orbit as a natural satellite of the Earth. This unit will be engaged in its remote sensing, and will also perform the functions of a signal repeater. According to the scientist, the launch of the apparatus "Luna-25" is scheduled for 2016 year, "Luna-26" - for 2018 year, "Luna-27" - for 2019 year. Lev Zeleny noted that these launches will be a continuation of the Soviet program, which contained two landings of lunar rovers, which successfully worked on the lunar surface, as well as three successful launches of automatic missions, which resulted in the delivery of lunar soil samples to Earth.

He noted that these were very serious achievements, they can be called great. Lev Zeleny hopes that the Russian space station Luna-25 will be able to successfully land on the lunar surface. At the same time, Russia expects to send the spacecraft not to those areas where research was conducted in the 1970s, but directly to the poles of the natural satellite of the Earth. These polar regions of the moon are still insufficiently studied by earthly scientists, although they certainly are of particular interest to modern science. Lev Green noted that the second stage of the Russian lunar program involves sending two more automatic stations - Luna-28 and Luna-29. The first of these is the return of lunar soil to Earth, the second is work on the surface of a natural satellite of the Russian lunar rover. 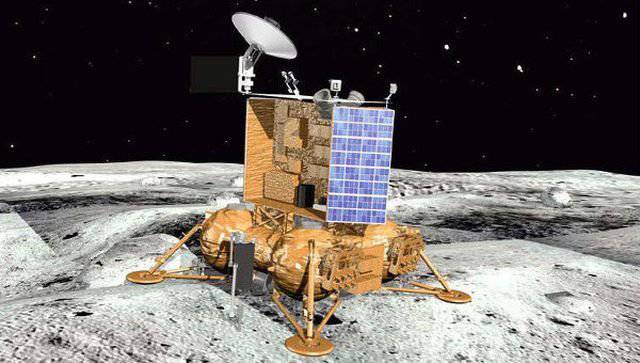 SC "Luna-Glob" or "Luna-25"
Earlier, the general director of the NPO. Lavochkin Victor Hartov told the press that the flight of the Luna-25 vehicle "would be for the most part demonstration." The purpose of this flight is the implementation of the landing apparatus near the south pole of the moon. On the device "Luna-25" the minimum set of scientific devices will be used, the design of the device was also somewhat simplified. The purpose of this launch is to return to our country the confidence that it is able to land spacecraft on the lunar surface, said Victor Hartov.

It should be noted that the apparatus "Luna-Glob" is hidden under the name "Luna-25". In October of last year, it was reported that the vibration-proof, design and antenna models of the Luna-Glob lunar probe are ready and are currently at different stages of testing. At the same time, the technical model of the spacecraft - the last stage before the construction of the flight sample itself, which will fly to the Moon - will be completed by the end of 2014. The new version of the project of the Luna-Glob probe was finally approved at the end of last year and implies minimizing the use of technical solutions that do not have flight qualifications. Everything in this Russian device should be sharpened on reliability and a guarantee of mission accomplishment.

After the "Moon-25" to the natural satellite of the Earth will fly "Luna-26" - the orbiter, on board which will be the repeater, which will ensure the work with subsequent Russian devices sent to the Moon, said Hartov. In this case we are talking about the device, which is also known as "Luna Resource". According to Viktor Hartov, such an orbital probe, located in the lunar orbit, can provide invaluable assistance in the future, allowing you to contact the landing module if there is no direct radio-visibility with our planet. The Luna-26 spacecraft should become one of the elements of the Russian lunar orbital infrastructure. 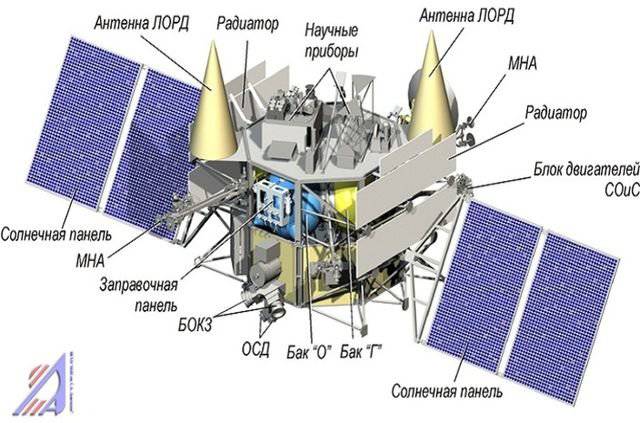 SC "Luna Resource" or "Luna-26"
The Luna-27 spacecraft will be a heavy landing probe that must be moored at the South Pole of our natural satellite. It will carry a drilling rig on board, which Russian scientists plan to use to search for water ice. “You should not hope that it will be possible to find pieces of ice on the lunar surface. In a vacuum, everything quickly disappears. Most likely, we can talk about finding a regolith, which will contain a certain percentage of ice at a certain depth. In order to obtain such samples, a powerful landing stage equipped with a drilling rig will be included in the Luna-27 mission, ”said Victor Hartov.

According to the specialist, the lunar soil with some content of frozen water can be located at a depth of about two meters from the lunar surface. “Therefore, it will be necessary to dig up to a depth of about two meters, get a regolith from it, and study it on the surface of the satellite. For this, Luna-27 will receive all the necessary scientific instruments and equipment, ”stressed Harts.

The next mission, called “Luna-28”, will be the main one. Sending to the Moon of this spacecraft involves the delivery to the Earth of samples of regolith mixed with ice, preferably in the form in which it is located on the Moon, without transferring the ice to water.

Ctrl Enter
Noticed oshЫbku Highlight text and press. Ctrl + Enter
We are
Since the launch of the first artificial satellite of the moon, 50 years have passedExploration of the moon is still difficult
Military Reviewin Yandex News
Military Reviewin Google News
62 comments
Information
Dear reader, to leave comments on the publication, you must sign in.