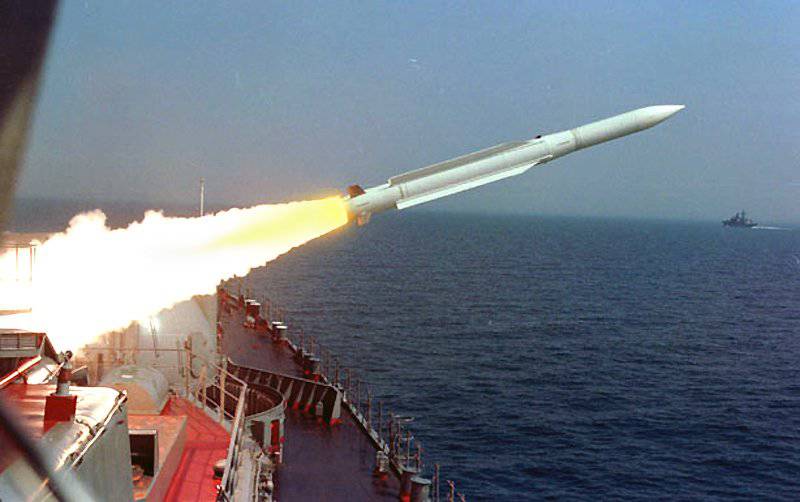 August 10, 2008 the group of ships of the Black Sea fleet in the composition of two BDK (flagship "Caesar Kunikov" and "Saratov") and two guard ships (MRK "Mirage" and MPK "Suzdalets") was located off the coast of Abkhazia.

In the area of ​​patrol by Russian ships, five unidentified boats were found at high speed. They violated the boundary of the declared security zone and did not respond to warnings. In 18: 39, one of the Russian ships fired a warning shot with an anti-aircraft missile fallen between the boats. The Georgians continued to move closer.

In 18: 41 IRA "Mirage" from the distance 25 km launched two anti-ship missiles "Malachite" towards the targets. As a result of both missiles hit the target, the Georgian hydrographic boat sank (disappeared from radar screens after a short-term exposure).

In 18: 50, one of the Georgian boats again went on rapprochement with the ships of the Black Sea Fleet. IRA "Mirage" from a distance of 15 km launched an anti-aircraft missile complex "Osa-M". As a result of a missile hit, the Georgian boat lost speed, and after the crew was removed by another boat, it finally burned out and sank. 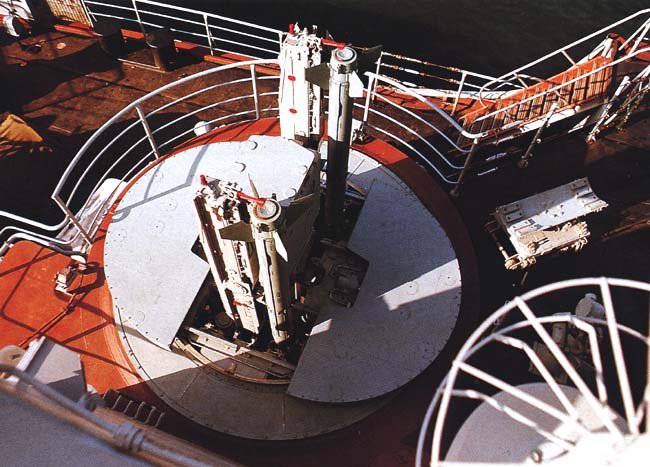 SAM "Osa-M", preparations for the battle. A double-girder PU with rockets extends from under the deck.
This is how the naval battle off the coast of Abkhazia, which occurred during the Five-Day War 2008, is described. Despite the discrepancies in some details, each source cites data on the shelling of Georgian boats with the help of the Osa-M missiles.

But how adequate is the use of anti-aircraft missiles at sea targets? Or is it all about the peculiarities of the Russian Navy ships, which at that time had no other, more suitable weapons?

The answer to this question can be events that happened exactly 20 years before the sea battle off the coast of Abkhazia.

18 April 1988 of the year. Persian Gulf. The US Navy carrier strike team bravely battles with three Iranian corvettes and two oil platforms during Operation Mantis. There are losses on both sides.

... At nine in the morning, the Charlie unit, consisting of the Wainwright missile cruiser and two frigates, Badley and Simpson, attacked the Iranian oil platform Sirri and after two hours of shelling completely destroyed the offshore oil-producing complex.

Towards lunchtime, the Iranian "fleet" was pulled up to the scene of the fighting. The 44-meter corvette (missile boat?) Joshan, who had the most serious intentions, approached the US Navy. The Iranian sailors responded by launching the Harpoon anti-ship missiles to the proposal to stop the engines and leave the ship. Yankee only miraculously managed to dodge the fired rocket.

There was no time for much thought. Simpson immediately responded with two RIM-66E missiles that fell into the Iranian corvette add-on. Following this, another anti-aircraft RIM-67 flew into Joshan from the Wainwright cruiser. 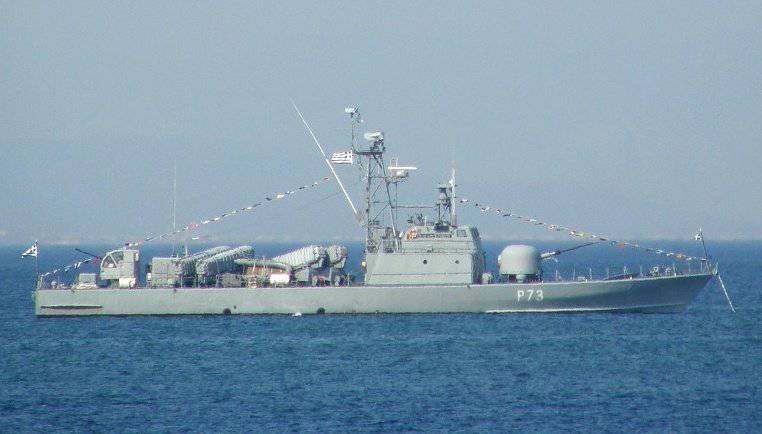 The boat of the Greek Navy, identical in design to the Iranian Joshan.
Full in / and 265 tons. Armament: 4 PKR, 76 mm caliber artillery and 40 mm artillery. 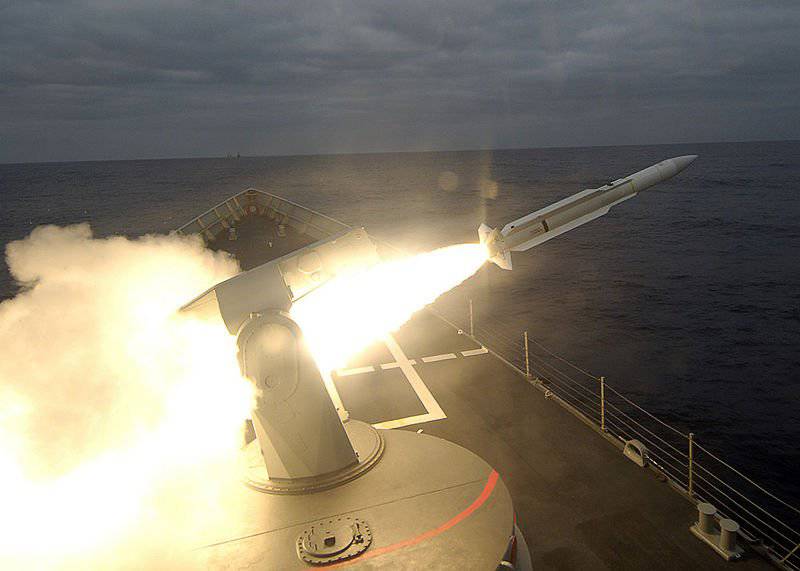 Launch of the Standerd-1 MR (RIM-66E) anti-aircraft guided missile. The mass of the warhead - 62 kg.
By this time, almost the entire crew of Joshan was dead. Three powerful explosions disfigured the superstructure and completely destroyed the Iranian ship. But the Americans only inflamed hunting passion. Not wanting to miss their portion of glory, the frigate “Badley” joined the gang beating, firing a “Harpoon” rocket at the ruins of Joshan from close range. However missed. Not wanting to spend more rockets, the American ships approached the sinking corvette and finished it off with cannons.

That's so sad история with a dark crimson hue. 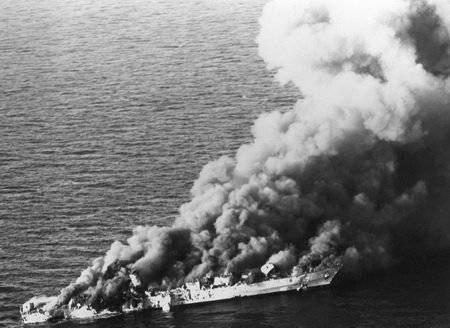 Lit Iran frigate "Sahand". This ship was destroyed by an air strike.
It is noteworthy that today the gallant frigate USS Simpson remains the only (!) Ship in the US Navy, which was given to sink the enemy ship (even if it is as poor as Joshan). Over the ensuing 26 years, the US Navy never again participated in a naval battle.

About this remarkable feature of anti-aircraft missile systems, the sailors have known for a long time. A half-century ago, during the naval exercises, an obvious discovery was made: at the line of sight, the ZUR should be the first to be launched. They have a smaller mass of warheads, but their reaction time is shorter compared to RCC by 5-10 times!

Unlike ground-based air defense systems, where the detection of low-flying targets is limited by terrain folds, trees and buildings, the open sea provides unprecedented opportunities in terms of detecting NLC — the line of sight is limited by the range of the radio horizon. In the case of large ships with high masts and superstructures, the detection range can reach 20-30 km. Most modern naval battles (or rather, skirmishes) occurred precisely at such a distance. And each time anti-aircraft missiles were actively used to defeat surface objects.

Is it difficult to direct an anti-aircraft missile on a ship?

Regardless of the method of targeting missiles (along the beam, radio command I and II, etc.), ultimately, the homing head (GOS) of an anti-aircraft missile or guidance station on board a ship doesn’t matter what radio signal is reflected from. From the wing of a low-flying aircraft or superstructures of an enemy ship, it does not matter! The main thing is that the target is within the line of sight, above the radio horizon.

In comparison with the aircraft, the colossal size (and, consequently, the EPR) of the enemy ship, on the contrary, contributes to improving the accuracy and reducing the likelihood of a miss.

It turns out that any marine air defense missile system has a mode of shooting ships?

No, not any. To effectively defeat surface targets, you need to fulfill one small condition - turn off the proximity fuze. Otherwise, a strong reflection of the signal from a large (compared to the aircraft) ship will cause a premature response of the warhead rocket. It detonates in the air at a considerable distance, without causing serious damage to the enemy.

The secret of focus was simple.

The missile defense system possesses all the useful skills of an anti-ship missile, while being several times superior to conventional RCC in response time. It has great speed (Mach 2-4) and extremely high maneuverability (RIM-162 ESSM available overload - up to 50g). Reduced flight time. Smaller SAMs make it difficult for an enemy ship to intercept it with air defense / missile defense systems. The cost of most missiles, as a rule, does not exceed the cost of anti-ship cruise missiles.

As a result, we have a dual-use system capable of hitting air and surface targets with equal efficiency.

What has been repeatedly proven in practice!

The only limitation for the air defense missile system is the firing range. When shooting at sea targets, it does not exceed 20-30 km - but, as practice shows, this is enough to fight at short distances, typical of modern local wars. In the era of confrontation between the Navy of the USSR and the US Navy, a small firing range was also not an obstacle to the use of the air defense system in naval combat. The fleets of the great powers practiced continuous tracking of each other, regularly approaching at a distance of direct visibility. 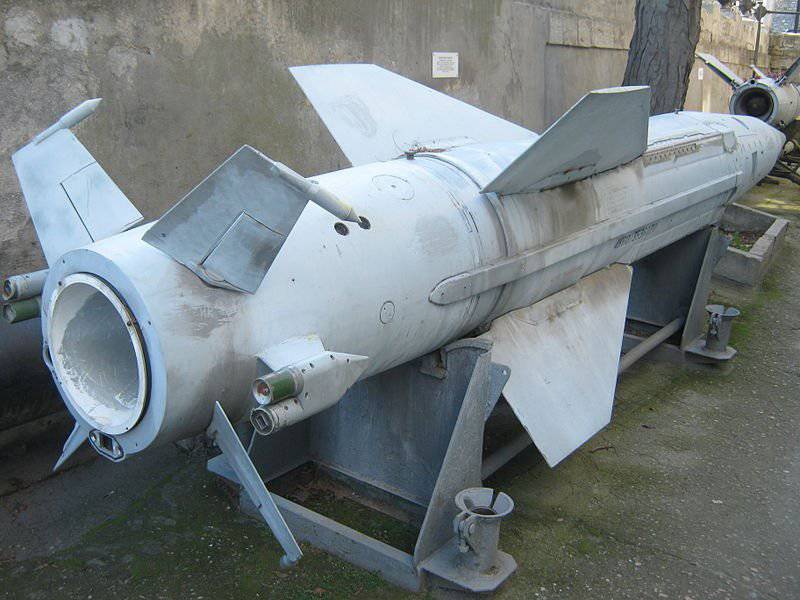 Anti-aircraft missile complex M-11 "Storm". Museum of the Black Sea Fleet (Sevastopol)
As for the "weakness" of the combat units of the Zour, it all depends on the specific complex. It was hardly more pleasant to get into the Z-BN X-board of the Storm anti-aircraft complex (mass of 611 warheads kg) than to withstand the impact of the French Exocset anti-ship missile (kg 120 warhead) or the Norwegian NSM warhead kg.

This feature of the air defense system was well known overseas. The results of the firing of the ship's anti-aircraft complex RIM-8 Talos at the target destroyer shocked all who watched these tests. A giant supersonic rocket nearly cut the unfortunate ship in half!

However, they did not expect anything else - a sea monster called “Talos” with an 136-kilogram warhead and a range of 180 kilometers of launch was a killer weapon, equally dangerous for air and surface objects. 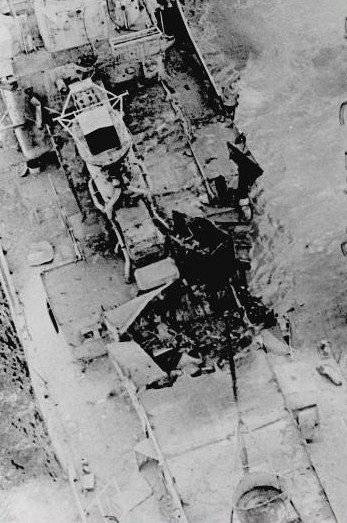 The nuclear modifications of Talos - RIM-8B and RIM-8D, equipped with SBCh with 2 CT, were supposed to be used for “clearing” the coast before the landing in the course of the Third World War.

The theme of the unique air defense system began to develop further: in 1965, a new modification of the RIM-8H Anti-Radiation Missile (ARM) was introduced into service, suggesting the emission of enemy radar stations. It was not possible to shoot such weapons at ships, but it is known that the cruiser Oklahoma City launched such ammunition through the jungles of Vietnam and even, according to the stories of the Yankees themselves, managed to crush enemy radars.
However, this improvisation on the basis of an anti-aircraft missile can no longer be regarded as an ordinary Zur. 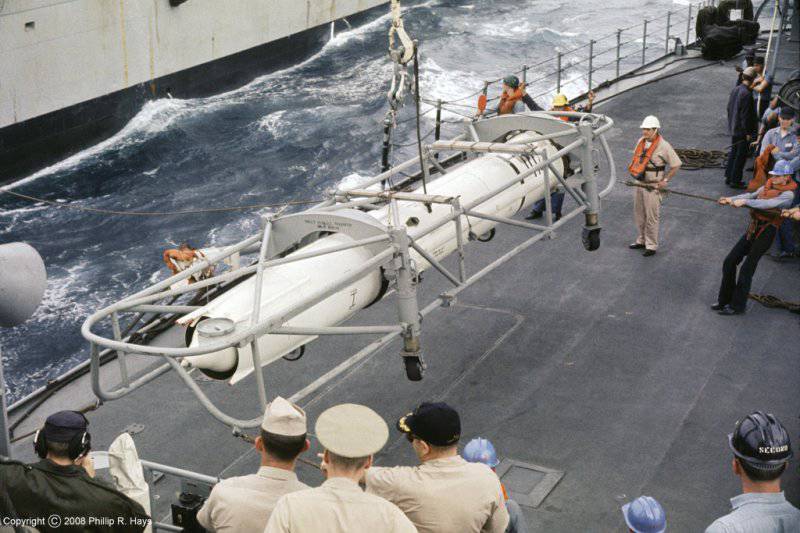 Anti-aircraft missile complex "Talos". The starting mass of this "baby" together with the accelerator is over 3,5 tons! 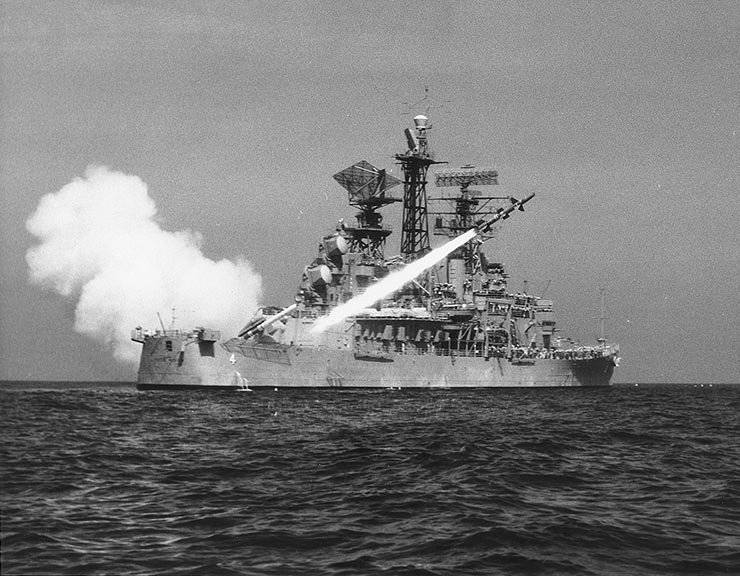 Start "Talos" from the cruiser "Little Rock"
Concluding the story about the unusual features of the ship's anti-aircraft missile systems, it is worth recalling the tragicomic event that occurred in the Mediterranean at the international sea exercise "Exercise Display Determination 92".

At that time, the command of the Sixth Fleet invited Turkish sailors to participate in the exercises. Seduced by such attention from "Uncle Sam," the Turks happily agreed and put out a few of their "pelvis" next to the US Navy carrier group. But no one told the Turks that they would be used as targets.

Overnight from 1 to 2 in October, 1992, a group of NATO ships, was plowing the Mediterranean, and by morning it turned out that the Turkish destroyer TCG Muavenet had broken the bridge and killed 5 officers. Another 22 Turkish sailors after those "exercises" were in a hospital bed.

... The officer who was in charge of the USS Saratoga aircraft carrier's self-defense systems, cheerfully reported to the commander: “All the assigned tasks were completed successfully. Consumption - two SiSperrow anti-aircraft missiles! 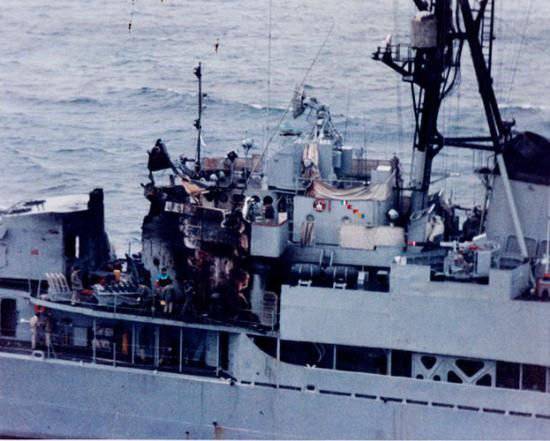 The result of 2 missiles RIM-7 Sea Sparrow in Muavenet
The Turks were terrified and bewildered - how could this happen? Two "Sisperrou" could not accidentally get into the Turkish destroyer. It was necessary to direct them specifically using radar illumination. The operator could not see and did not know whom he shoots. What happened looks like an unfriendly act and betrayal of an ally.

When they began to understand, it turned out that on that night the Americans were training the shipboard air defense missile systems, alternately “taking the fly” Turkish ships going abeam (of course, the Turks were not warned about this). Then - the usual army humor: “Who threw the boots on the rocket console ?!” The launch command went through the electrical circuits, the plugs of the guides of the launchers flew out with a clang, two anti-aircraft missiles went to their chosen target. The sailor, who controlled the illumination radar, did not have time to say “Oh, shit”, as a pair of fiery lightning plunged into the superstructure of a nearby ship, illuminating for a moment the vastness of the sea.

The whole story ended in the typical way. Seven American sailors received a penalty, and another outdated frigate was presented to the Turkish Navy to replace the beaten Muavenet.

What is left to add? Now even the Turks know that the ship's air defense missile system is not a pound of raisins. 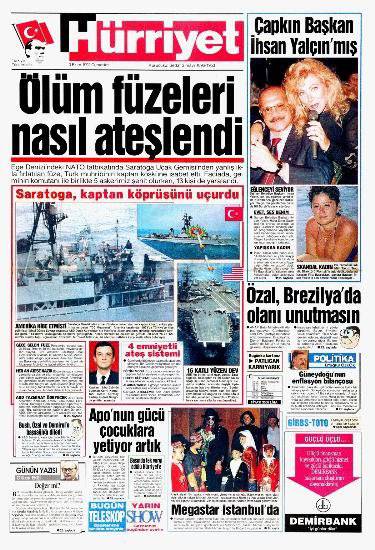 Ctrl Enter
Noticed oshЫbku Highlight text and press. Ctrl + Enter
We are
Chinese anti-ship missiles. Part 2Division bad weather. Missile corvettes of the Soviet Navy
Military Reviewin Yandex News
Military Reviewin Google News
51 comment
Information
Dear reader, to leave comments on the publication, you must sign in.
1. they (air defense / missile defense) in general are unlikely to intercept it
2. and what can this turd do to the ship? WDU-27 / B warhead weight: 40,5 kg