The fascist coup in Ukraine is being prepared by the USA 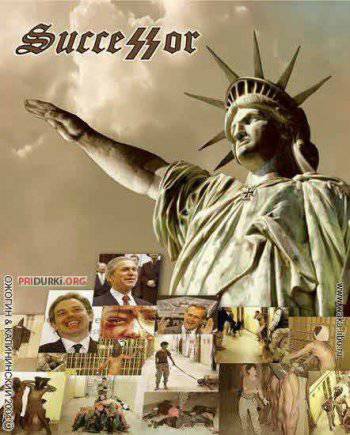 We, officers of Ukraine, in order to prevent a split of Ukraine, publish the following materials for understanding the operational situation and preserving the territorial integrity of Ukraine!


History the emergence of the "Right Sector"

The Right Sector organization emerged against the backdrop of an internal conflict between the Social - National Assembly and the radically-minded VO "Trident" to them. S. Bandera (no comments required). These organizations, through a number of “grant-raising” structures, receive funds from various Western “pro-Ukrainian organizations” (created by the special services of the NATO countries during the USSR as an element of political struggle and support of national movements in the Union republics), such as various unions of veterans and fighters OUN - UPA, funds of unknown Ukrainian patriots, writers and activists who "sincerely believed" in gaining independence of Ukraine, but after receiving it, they "forgot" to return to their homeland and continue to exist. alone.

For reference: the pro-fascist organization, which includes supporters of the ideas of fascism and building in Germany the analogue of Germany 1933-1945. More detailed information on the activities of this group may be freely obtained on the Internet.

It is thanks to the instructions of these foreign charities from the beginning of the “Euromaidan” that the Nazis began to create a closed coordination center (analysts who develop a strategy for the action of combat groups and carry out Internet monitoring and the creation of provocative blogs on the closed pages of nationalists and Nazis in the global network). This center gave instructions to murders on the street. Grushevskogo to increase the escalation of the conflict and the "excitement" of the crowd to the police. By a strange coincidence, this center, together with specific equipment, is conspiratorially located at the address: Kiev, ul. Mazepa 6, it is interesting that the above-mentioned "grant-raising organizations" are also located at this address (this information is available on the Internet). Also deserves operational attention is the fact that between the embassy of the Republic of Latvia and the focal point the movement of persons is constantly carried out, and on the street video surveillance and counter surveillance are carried out (in order to identify visual observation by law enforcement officers).

Since the beginning of Euromaidan, each leader of the active resistance group was promised a monetary reward (for each active fighter for 200 US dollars per day for one member of the group and additionally 500 dollars if the group is more than 10 people, for coordinators - from 2000 US dollars, for the day of mass riots, provided that the controlled group performs direct attacking actions against law enforcement officers and representatives of state authorities).

It was established that the funds were received by the US Embassy in Kiev (through a diplomatic channel) to the central offices of VO Svoboda and VO Batkivshchyna (about 20 million dollars a week). In turn, these funds were distributed in support of “Euromaidan” (life support system, bribes and bribery of individual officials and law enforcement officers, media payments, campaigning) and for daily payments to active fighters, the leaders received funds non-cash to their personal accounts. At the same time, it was found that the leaders of these right-wing structures, at their request, were guaranteed assistance in emergency evacuation from the territory of Ukraine and the provision of housing and facilities in any EU country to choose from (a vivid example of the leader of the political group of provocateurs of the so-called “automaidan” - Koba, who, like a rat, fled abroad, which proved that Ukraine is not important to him, but only mercantile interests).

Detachment "White Hammer" - the elite of pogroms! It consists of regular participants - "militants", united by the ideas of neo-Nazism, hatred of "Jews", "black" and "garbage". Members of the group are known in the environment as the most aggressive and inadequate fighters who are ready to carry out any actions against any categories of persons (the overwhelming majority of the former group have been convicted of serious crimes and a small number of foreigners persecuted in their countries for such crimes).

It was this group that “did not like it” that representatives of the Jewish communities of Ukraine officially speak on “Euromaidan” and rabbis perform prayers. As a result, despite the instructions of the Euromaidan leaders, they carried out a series of attacks on members of the Jewish community on the territory of the so-called synagogue in Podol, and only after beating the leader of the Krym group (teeth were knocked out and they conducted “explanatory work” on the subject of subordination) and ordinary soldiers (held on the 5 floor of the house of trade unions with the participation of 40 soldiers of Liberty) were temporarily forced (until the victory of the revolution) to stop persecuting members of the Jewish communities.

However, these individuals received firearms weapon (complete with instructors (about 200 people) by the US Embassy) for the murder of accomplices who began to condemn the throwing of stones and Molotov cocktails at the Berkut employees on ul. Hrushevsky, for the escalation of tension and shifting the blame on the police officers, so the first victim was precisely an ethnic Armenian, whose stay on the barricades, from the point of view of “molotovtsiv”, contradicts the idea of ​​racial superiority of the dominant nation.

The detachments “Poltava” and “Morozko” are composed and are guided in the majority by the activists of the radical VO “Trident” to them. S. Bandera. In addition to the activists of the latter, “fighters” of the movement “Common cause” and NSP “Direct action” and citizens who share nationalistic views are included in the units, they are called “Free nationalists”. The composition of these two units and their commanders often change. The credo of the existence of these groups is in the phrase "the wolf right - who is stronger, he is right."
Prohibited for displaying video materials in paid media
http://www.youtube.com/watch?v=lK8LJ4lDja0&feature=youtu.be
These guys are military men - they carry out orders, and unlike the overwhelming number of pseudo-patriots (who, despite their own “patriotism”, have not served the day in the Armed Forces of Ukraine), they really serve their country and honestly do their duty in accordance with the concept of military honor. And they are our children, and the grandchildren of those who defeated fascism on this earth.

We appeal to the so-called "democratic" TV channels, in the near future we will highlight all money transfers from "foreign" partners to your addresses and on reaching an agreement with you. Specially without comments (for an objective assessment of the people of Ukraine), we will post a video of exactly that which you do not notice in your journalistic investigations and reports, and we will convincingly explain the direction of your actions.

We have now received information that the focal point plans to lustrate the entire intelligentsia: writers, cultural figures, scientists, doctors, law enforcement officers who supported the current government, carried out their functional and official duties, or simply spoke out condemning the actions of this gang of Nazis. To do this, they instructed to collect information about the location of families of people who are actively acting on the side of the current government or performing their professional duties in order to destroy them and divert members of these families from fulfilling their duties and intimidate the rest of the dissenters.

Appeal to military officers, all who served and their children

We, officers, do not have foreign accounts, overwhelmingly did not go abroad and do not have palaces there, we are not afraid of sanctions of any countries of the world, we are for a single indivisible Ukraine and against interference in the internal affairs of our country by the special services of Russia, the United States and the European Union.

At the same time, we appeal to all categories of law enforcement officers, in case of family problems, you can visit the residence address of these Nazis for the purpose of an adequate response. In connection with the foregoing, we provide complete installation data for all persons who took part in the riots, hiding behind masks their faces, confident of their impunity. The officers of Ukraine remember the victory of our people over fascism.

Separately, the courage and endurance during the attacks of brazen fascists deserves special respect for the employees of the “Berkuta”, the Verkhovna Rada and the employees of the Ministry of Internal Affairs, we are near you, working on our secret barricades and we hope that our work will help you to hold out until order is established in Ukraine .

Union of Officers of Law Enforcement and Special Units of Ukraine