Day of the complete liberation of Leningrad from the blockade. The myth of the need to surrender the city without a fight

January 27 2014
112
70 years ago, 27 January 1944, the Soviet troops completely lifted the blockade of Leningrad that lasted 900 days. German troops surrounded the second capital of the Soviet Union 8 September 1941. But the most important political, industrial and cultural center of the USSR, despite fierce battles, bombings and artillery shelling, withstood the onslaught of the enemy. Then the German command decided to take the city into oblivion.


It should be noted that not only German troops took part in the siege of Leningrad, but also the Finnish army, the Spanish units (the Blue Division), European volunteers, and the Italian Navy, which lent the character of civilization confrontation to the defense of Leningrad. The main road on which the country could supply the city was the “Road of Life” for a long time - an ice road on Lake Ladoga. The capacity of this transport artery could not meet all the needs of a huge city, so Leningrad lost from 700 thousand to 1,5 million people. The overwhelming majority of people died from hunger and cooling caused by a shortage of fuel and food. Especially large losses occurred in the first blockade winter. Subsequently, the supply improved, subsidiary farms were organized. Deaths have become much smaller.

The Siege of Leningrad has become one of the most heroic and terrible pages of the Great Patriotic War. Suffice it to recall the poignant diary of a Leningrad schoolgirl Tatiana Savicheva. The document contains only 9 pages, and six of them are dedicated to the death of people close to her - mother, grandmother, sister, brother and two uncles ("The Savichevs died. All died. Only Tanya was left"). Virtually the entire family died during the first blockade winter: from December 1941 to May 1942. Tanya herself was rescued by being evacuated to the “mainland”. But the girl’s health was undermined, and she died in the 1944 year.

At the cost of great losses and incredible efforts, the Red Army was able to literally break through the powerful German defenses during Operation Iskra (Operation Spark. To the 70 anniversary of the breakthrough of the blockade of Leningrad). The troops of the Leningrad and Volkhov fronts to 18 January 1943, broke through a small corridor along the shore of Lake Ladoga, restoring the land connection of the city with the country. Here, in the shortest possible time, they laid a railway branch and a motorway (“Victory Road”). This allowed to evacuate a significant part of the civilian population and to organize the supply of the city.

At the beginning of 1944, in the Leningrad region, the Red Army conducted an offensive strategic operation (the first “Stalinist strike”), which led to the final de-blockade of Leningrad. As a result of a number of strategic operations, among which are the Stalingrad battle, the battle of Oryol and Kursk, the Donbass operation and the battle for the Dnieper, conducted by the Red Army in 1943, by the beginning of 1944, the situation was favorable.

At the same time, the German armed forces still represented a serious force. The Wehrmacht retained combat capability, could conduct military operations, controlled significant areas of the USSR. In addition, the absence of a second front in Western Europe contributed to the Germans, allowing Berlin to concentrate its main efforts on the Eastern Front. The military operations that took place in Italy, in their scope and significance, could not have a serious impact on the Wehrmacht.

In December 1943, the Stavka decided to organize a series of strikes against enemy troops from Leningrad to the Black Sea, focusing mainly on the flanks of the Soviet-German front. In the southern direction, they planned to liberate the Crimea, Right-Bank Ukraine, and reach the USSR state border. In the north, crush the Army Group North, completely lift the blockade from Leningrad, liberate the Baltic States.

The task of liberating Leningrad and defeating Army Group North was accomplished by the troops of the Leningrad Front, Volkhov Front, 2nd Baltic Front and the Red Banner Baltic fleet (The first "Stalinist strike": the complete elimination of the blockade of Leningrad). On January 14, with the Oranienbaum bridgehead, the 2 shock army of the Leningrad Front launched an offensive. On January 15, the 42 Army LF launched an offensive. The Volkhov Front also struck 14 in January. The enemy, relying on well-prepared defensive lines, put up stubborn resistance. The factor of the marshy-wooded area also had an effect. The start of a thaw, unexpected for January, interfered with the action of armored vehicles.

19 January, Soviet troops liberated Ropsha and Krasnoye Selo. German troops were driven back from Leningrad on 25 km, the Peterhof-Strelinsky group of the enemy was broken, partially surrounded and destroyed. The Mginsk group was under the threat of encirclement, the Germans began to hastily withdraw troops. On January 20, the troops of the Volkhov Front liberated Novgorod (The first "Stalinist strike." Part of 2. The liberation of Veliky Novgorod from the German invaders).

For the whole of the ancient Russian city, which was a major scientific, cultural, and industrial center before the war, only 40 buildings remained intact. The greatest monuments of ancient Russian architecture and painting were destroyed. From the temples of the Savior on Ilyina, Peter and Pavel in Kozhevniki only the skeletons of the walls remained, the Nikolsky Cathedral was destroyed, the Sofia Cathedral was looted and partially destroyed. Novgorod Kremlin suffered a lot. The German military-political leadership, which planned to give the Novgorod land for settlement to the East Prussian colonists, tried to wipe off all evidence of the Russian historical and cultural presence in this territory. The monument to the Millennium of Russia was dismantled and planned to be melted down.

On January 30, Soviet soldiers liberated Pushkin, Slutsk, Krasnogvardeisk and reached the line of the Luga River in its lower course, taking several bridgeheads. During this period, the Soviet partisans sharply intensified their actions. The German command had to throw not only separate security divisions, but also a battalion from each field division to fight them. The central headquarters of the partisan movement organized a series of attacks on the German rear.

27 January in Moscow and Leningrad was made a solemn salute in honor of the final de-blockade of the northern capital. Three hundred and twenty-four guns struck in honor of the great victory. The Soviet Union lit a flash of triumphant joy.

The Soviet offensive continued in the Narva, Gdov and Luga sectors. The Germans made strong counterattacks. They even managed to surround the individual Soviet units. Thus, for two weeks, battles were fought, surrounded by a compound of the 256 th rifle division and part of the 372 th rifle division. February 4 was released Gdov, Soviet troops reached the Lake Peipsi. 12 February The Red Army liberated the city of Luga. February 15 was broken through the Luga defensive line. Soviet troops broke into the long-term German defense and drove the Germans back to the Baltic States. Heavy fighting continued until early March, but the Leningrad Front was unable to solve the task of liberating Narva. By the beginning of March 1944, the Soviet troops of the Leningrad and 2 Baltic Fronts (the Volkhov Front was disbanded, most of its troops were transferred to the Leningrad Front, some to the 2 Baltic) reached the line Narva - Lake Peipsi - Pskov - Island - Idritsa. The Germans held onto the Panther line. At the direction of the Stavka, the Soviet fronts turned defensively. For more than a month and a half, they fought hard battles. Army suffered heavy losses in manpower, equipment, experienced an acute shortage of ammunition.

The myth of the possibility of saving the inhabitants of Leningrad

The topic of the blockade of Leningrad did not stay aside from the attention of "humanists and liberals." So, it has been said more than once that if Stalin’s “cannibal regime” had surrendered the city to “European civilizers” (Germans and Finns), it would have been possible to save the lives of hundreds of thousands of civilians in the northern capital.

These people completely forget about the military-strategic factor of Leningrad, when the fall of the northern capital would cause a serious deterioration of the situation on the Soviet-German front. The German command got the opportunity to activate offensive actions in the northern strategic direction and transfer significant forces of the Army Group North to other directions, for example, they would be useful for storming Moscow or seizing the Caucasus. They do not recall the moral factor either: the loss of the northern capital would weaken the spiritual mood of the people and the army at the most critical moment.

The “humanists” do not recall the fact that the Hitlerite leadership planned not only to seize Leningrad, but also completely destroy the city on the Neva. 8 July 1941 at a meeting of the Supreme Command of the German Armed Forces, Chief of Staff of the Ground Forces Command Halder noted in his diary Hitler’s unshakable decision to "level Moscow and Leningrad with the ground" in order to completely get rid of the population of these large cities. The Germans were not going to solve the problem of feeding the population of the Soviet cities.

16 July 1941 of the year at a meeting of the top leaders of the German Empire, this idea was confirmed. Finland claimed the Leningrad Region. Hitler proposed to level the northern capital of the USSR with the land and give the empty territory to the Finns.

On September 21, 1941, the defense department of the Supreme High Command of the German Armed Forces presented an analytical note in which it considered various options for the future of Leningrad. The authors of the report rejected the option of occupying the city, as they would have to supply the population. A scenario of the hermetic blockade of the city, its destruction with the help of aviation and artillery. Hunger and terror were supposed to solve the "problem of the population." Remains of the civilian population suggested "letting go." It is clear that no one was going to feed them.

On the part of Finland, Leningrad also did not have to wait for anything good. The Finnish General Staff reported to the Foreign Ministry of Finland at the beginning of September 1941 that the occupation of the city on the Neva by Finnish troops was considered unrealistic, since there are no food supplies to provide civilians. On September 11, Finnish President Ryti declared to Berlin that “Leningrad must be liquidated as a major city,” and the Neva will become the border between the two states.

Thus, the "enlightened Europeans" - the Germans and Finns - proposed to level Leningrad with the land, and its population should have died of starvation. Nobody was going to feed the “Russian barbarians”. 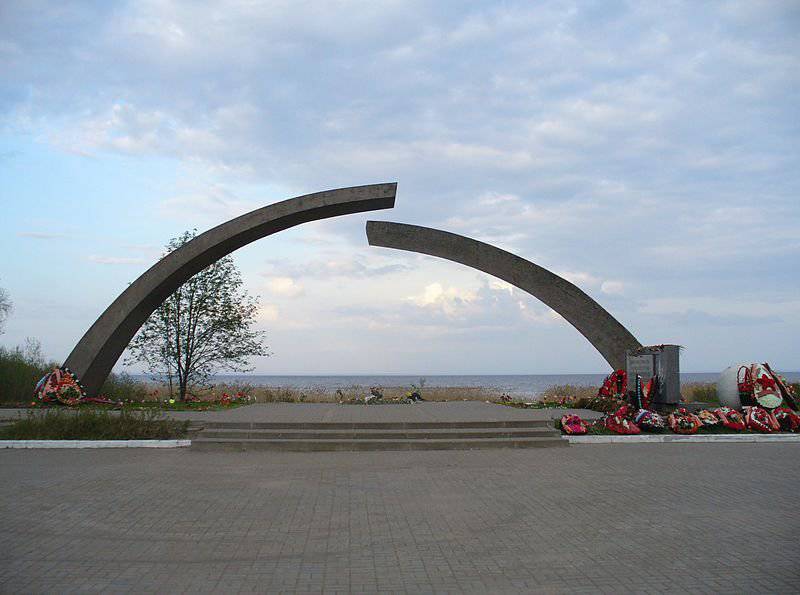