Even US aircraft carriers cannot escape from Russian missiles

Recently, the head of the Pentagon, Leon Panetta, said the truism: "Any fifth grader knows that US carrier strike groups are not able to destroy any of the existing powers in the world." Indeed, American AUGs are invulnerable because aviation “Sees” further than any land (and marine) radar system. They quickly manage to "detect" the enemy and from the air do with it everything that the soul wants. However, we were able to find a way to "put black marks" on the US Navy - from space. At the end of the 70s, the USSR created the “Legend” marine space reconnaissance and target designation system, which could direct a missile onto any ship in the oceans. Due to the fact that high-resolution optical technologies were then unavailable, it was necessary to launch these satellites into a very low orbit (400 km) and power them from a nuclear reactor. The complexity of the energy scheme predetermined the fate of the entire program - in 1993 the Legend ceased to “cover” even half of the marine strategic directions, and in 1998 the last unit ceased to serve. However, in 2008, the project was reanimated and already on new, more effective physical principles. As a result, by the end of this year, Russia will be able to destroy any American aircraft carrier anywhere in the world within three hours with an accuracy of 3 meters.

The United States made a win-win bet on the carrier fleet - the “poultry farms”, together with the missile protection of the destroyers, became inaccessible and extremely mobile floating armies. Even the powerful Soviet naval fleet there was no hope of competing with the American on equal terms. Despite the presence of submarines in the USSR Navy (nuclear submarines pr. 675, pr. 661 Anchar, submarines pr. 671), missile cruisers, coastal missile systems, numerous fleet of missile boats, as well as numerous missile systems P-6, P -35, P-70, P-500, there was no certainty about the guaranteed defeat of AUG. Special combat units could not correct the situation - the problem was reliable over-the-horizon detection of targets, their selection and providing accurate target designation for flying cruise missiles. 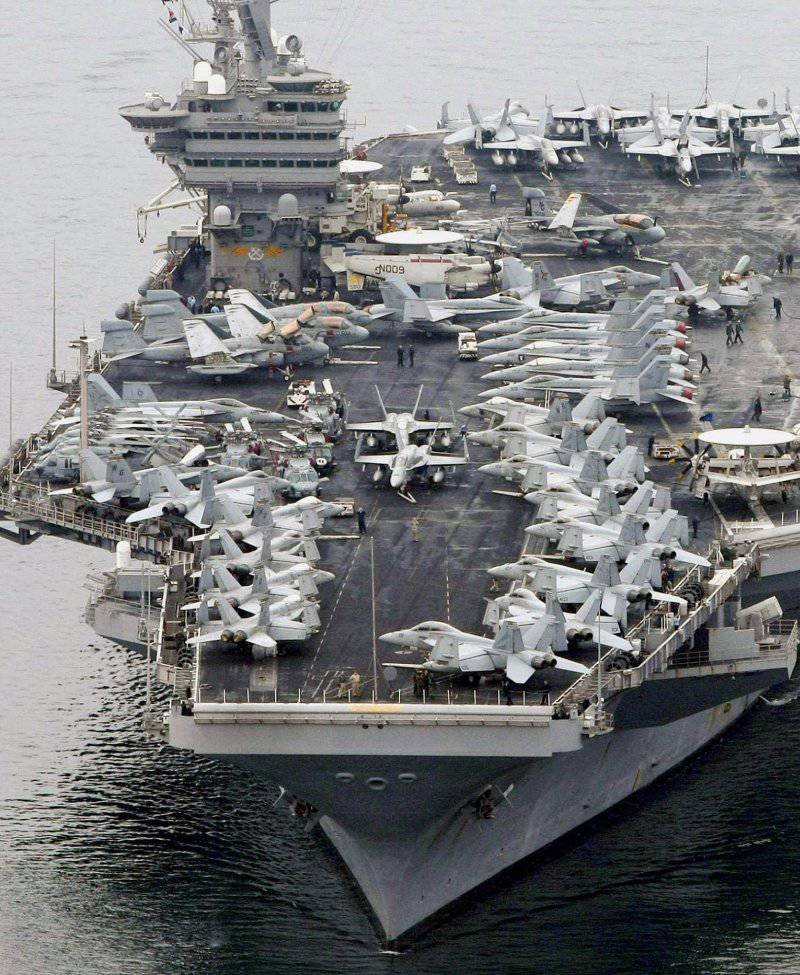 The use of aviation for guiding the anti-ship missile system did not solve the problem: the ship-based helicopter had limited capabilities, moreover, it was extremely vulnerable to carrier-based aviation. The scout Tu-95РЦ, despite the excellent makings, was ineffective - the plane took many hours to arrive in a given area of ​​the oceans, and again the scout became an easy target for fast deck interceptors. Such an inevitable factor, like weather conditions, finally undermined the confidence of the Soviet military in the proposed target designation system based on a helicopter and a reconnaissance aircraft. There was only one way out - to observe the situation in the World Ocean from space.

The largest scientific centers of the country - the Institute of Physics and Energy and the Institute of Atomic Energy named after A.M. I.V. Kurchatov. The orbital parameters were calculated under the guidance of Academician Keldysh. The head office of the organization was the VN Design Bureau. Chelomey. The development of a nuclear onboard power plant was carried out at OKB-670 (NPO Krasnaya Zvezda). At the beginning of 1970, the Leningrad plant Arsenal manufactured the first prototypes. The radar reconnaissance device was put into service in the 1975 year, and the radio intelligence satellite - in the 1978-m. In 1983, the last component of the system was adopted - the P-700 supersonic anti-ship missile Granit.

In 1982, the unified system was tested in action. During the Falkland War, data from space satellites allowed the command of the Soviet Navy to track the operational and tactical situation in the South Atlantic, accurately calculate the actions of the British fleet and even predict the time and place of landing in the Falklands of the English landing force. The orbital grouping together with the ship information receiving points ensured the detection of the ships and the issuance of target designation to the rocket arms.

The first type of satellite US-P (“controlled satellite - passive”, index GRAU 17Ф17) is a complex of electronic reconnaissance, designed to detect and find objects with electromagnetic radiation. The second type of US-A satellite (“controlled satellite is active”, the GRAU 17Ф16 index) was equipped with a two-way side-looking radar system providing all-weather and all-day detection of surface targets. Low working orbit (which eliminated the use of bulky solar panels) and the need for a powerful and uninterrupted power source (solar batteries could not work on the shadow side of the Earth) determined the type of on-board power source - the BES-5 “Buk” nuclear power unit with thermal power 100 kW (electric power - 3 kW, estimated operating time - 1080 hours).

18 September 1977 was successfully launched from Baikonur spacecraft "Cosmos-954" - the active satellite of the Legend international satellite center. For a whole month, Cosmos-954 worked in space orbit, along with Cosmos-252. October 28 The satellite 1977 suddenly ceased to be controlled by ground control services. All attempts to orient him to success have failed. It was also not possible to put the graves into "orbit". At the beginning of January 1978, the depressurization of the instrument compartment of the spacecraft occurred; the Cosmos-954 completely failed and stopped responding to requests from Earth. An uncontrolled descent of a satellite with a nuclear reactor on board began. 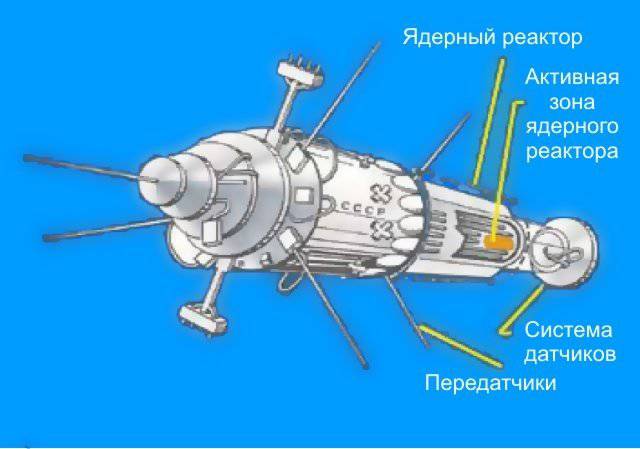 The Western world looked with horror into the night sky, expecting to see the falling star of death. Everyone was discussing when and where the flying reactor would fall. "Russian Roulette" has begun. Early in the morning of January 24, Cosmos-954 collapsed over the territory of Canada, filling Alberta province with radioactive debris. Fortunately for Canadians, Alberta is a northern, sparsely populated province, and no one from the local population has been hurt. Of course, an international scandal occurred, the USSR paid a symbolic compensation and for the next three years refused to launch US-A. Nevertheless, in 1982, a similar accident occurred on board the Kosmos-1402 satellite. This time the spacecraft safely drowned in the waves of the Atlantic. If the fall had begun on 20 minutes earlier - Cosmos-1402 would have landed in Switzerland.

Fortunately, no more serious accidents with “Russian flying reactors” were recorded. In case of emergency situations, the reactors were separated and transferred without incident to the “burial orbit”. In total, under the program “Marine Space Intelligence and Targeting System”, 39 launches (including test ones) of US-A radar reconnaissance satellites with nuclear reactors on board were made, of which 27 were successful. As a result, US-A in 80-ies reliably controlled the surface situation in the oceans. The last launch of this type of spacecraft took place on March 14 1988 of the year.

At present, only the US-P passive radio intelligence satellites are part of the space group of the Russian Federation. The last of these, Cosmos-2421, was launched on 25 on June 2006, and failed. According to official information, there were some minor problems on board due to incomplete disclosure of solar panels.

During the chaos of 90's and the underfunding of the first half of 2000's, Legend ceased to exist — in 1993, Legend ceased to even cover half of its strategic maritime directions, and the last active device was buried in 1998. However, without it, it was impossible to talk at all about any effective counteraction to the American fleet, not to mention the fact that we became blind - military intelligence remained without an eye, and the country's defense capability deteriorated sharply.

The resuscitation of the intelligence and target designation system was returned to 2006, when the government instructed the Ministry of Defense to work out the issue in terms of the use of new optical technology for accurate detection. 125 enterprises of 12 industries, the working title “Liana” was connected to the work. In 2008, a well-developed project was ready, and in 2009, the first experimental launch and removal of the experimental apparatus into a given orbit took place. The new system is more versatile - because of the higher orbit, it can scan not only large objects in the ocean, which the Soviet Legend was capable of, but any object up to 1 meters in size anywhere in the world. Accuracy has increased more than 100 times - to 3 meters. And at the same time no nuclear reactors that threaten the Earth’s ecosystem.

In 2013, the Russian Federal Space Agency (Roskosmos) and the Ministry of Defense of Russia completed the experimental creation of Liana in orbit and began to debug its systems. According to the plan, by the end of this year, the system will work on 100%. It consists of four newer radar reconnaissance satellites, which will be based at an altitude of about 1 thousand kilometers above the surface of the planet and constantly scan ground, air and sea space for enemy targets.

“Four satellites of the Liana system — two Pions and two Lotos — will detect enemy objects in real time — planes, ships, cars. The coordinates of these goals will be transmitted to the command post, where a virtual real-time map will be formed. In the event of war, high-precision strikes will be delivered to these objects, ”a representative of the General Staff explained the principle of the system.

Not without the "first pancake." “The first satellite Lotos-S with the index 14Ф138 had a number of drawbacks. After launching into orbit, it turned out that almost half of the onboard systems were not functioning. Therefore, we demanded that the developers bring the equipment to mind, ”said the representative of the Space Forces, which are now included in the aerospace defense. Experts explained that all the flaws of the satellite were associated with flaws in the software of the satellite. “Our programmers have completely reworked the software package and have already reshuffled the first Lotus. Now the military has no complaints against him, ”the Ministry of Defense told. 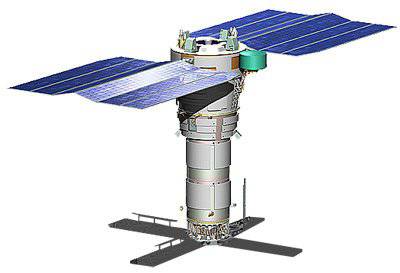 Another satellite for the Liana system was launched into orbit in the fall of 2013 of the year - Lotos-S 14F145, which intercepts data transmission, including enemy negotiations (radio intelligence), and the advanced radar reconnaissance satellite will go to space in 2014. Peony-NKS »14F139, which is able to detect an object the size of a passenger car on any surface. Before 2015, another “Peony” will be included in “Liana”, thus the size of the system grouping will expand to four satellites. After entering the settlement mode, the “Liana” system will completely replace the outdated “Legend - Tselina” system. It will significantly increase the capabilities of the Russian Armed Forces to detect and destroy enemy targets.