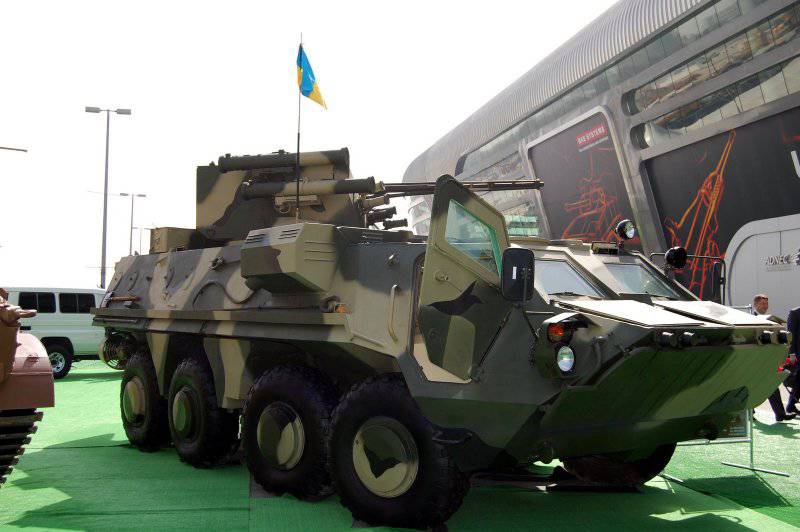 As Interfax-Ukraine was told on Friday by the state-owned Ukrspetsexport, her daughter, Spetstekhpoeksport, won the tender of the Indonesian Defense Ministry to supply the BTR-4 armored personnel carriers in the amount of 5 vehicles for the needs of the Indonesian Navy.

As Interfax-Ukraine was told on Friday by the state-owned Ukrspetsexport, her daughter, Spetstekhpoeksport, won the tender of the Indonesian Defense Ministry to supply the BTR-4 armored personnel carriers in the amount of 5 vehicles for the needs of the Indonesian Navy.

As specified in the state-owned companies, the decision was made by the Indonesian military 22 January. The signing of a contract for the supply of military equipment on the basis of a tender is expected in the first quarter of this year.

According to the state-owned company, the delegation of the Ministry of Defense of Indonesia during an official visit to Ukraine in August last year got acquainted with the characteristics of the BTR-4 during the tests at one of the Ukrainian test sites.

"The Indonesian military highly appreciated the tactical and technical characteristics of the new Ukrainian armored vehicles," they said in Ukrspetseksport.

As reported, the Ukrainian BTR-4 entered the top ten armored personnel carriers in the world in terms of protection, firepower and mobility according to the influential international magazine Army Technology.

BTR-4 - developed by the State Concern "Ukroboronprom" GP "Kharkiv Design Bureau for Mechanical Engineering named after A.Morozov", adopted for use by the Armed Forces of Ukraine, is serially produced at GP "Malyshev Plant" (Kharkov).

KMDB them. Morozova did not receive official claims from Iraq about the party from 40 BTR-4, which was returned to Ukraine
The deputy general director of the KMDB, Yuri Volchenko, informed the “Uryadovoy courier”.

“We received no official complaints from the Iraqi Ministry of Defense or from the bodies authorized by it,” said Volchenko.

According to him, the only source of information about cracks in the case is the Internet, because, according to current international practice, any customer’s claims on the equipment supplied are made out by an appropriate reclamation act agreed with the manufacturer.

Volchenko said that to date, the KMDB has already completed production under the Iraq contract about another 50 machines that are currently being tested.

Earlier, the Ukrainian armored vehicles of the new generation have already received high marks from potential buyers at the largest regional defense exhibitions.

Ctrl Enter
Noticed oshЫbku Highlight text and press. Ctrl + Enter
We are
Completion of the contract for the supply of armored personnel carriers BTR-4 to Indonesia
Military Reviewin Yandex News
Military Reviewin Google News
22 comments
Information
Dear reader, to leave comments on the publication, you must sign in.