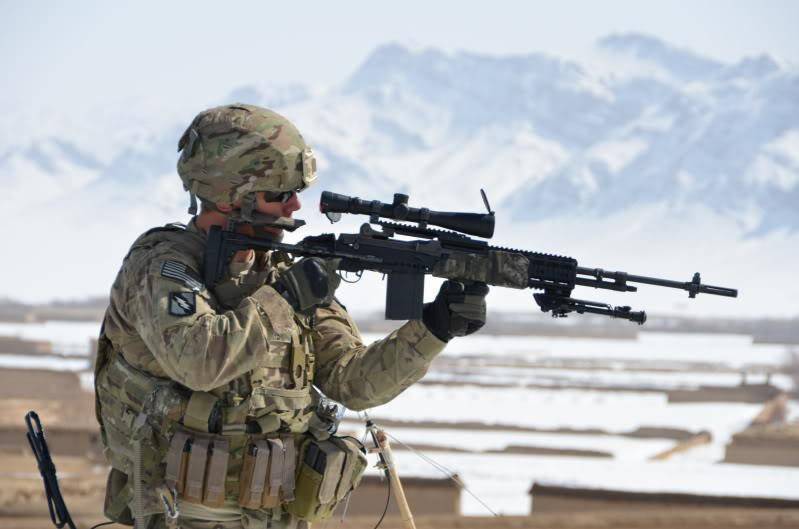 From sights to thermal imagers, the market for rifle assistive devices has always been an area of ​​active development. However, the desire to realize the multi-tasking potential of sniper units further spurs activity in this direction.

The sniper rifle in recent asymmetrical conflicts has been the main tool for providing lethal opportunities at maximum distance. Her presence on the battlefield was also accompanied by parallel developments by manufacturers of auxiliary devices and accessories that increase reliability and usability. weapons and, ultimately, safety shooter.

Standard additions include telescopic sights and thermal imagers, as well as an integrated guide for other accessories developed by the industry. All this allows to significantly increase the effectiveness of the sniper and reduce the load on him.

As part of the operation of Herrick 19 in Afghanistan, the 4 Scots sniper platoon participated in the deployment of the British armored brigade. The sniper from this platoon said that firing at targets at long distances requires a detailed calculation system.

The key to the sniper's combat mission is accurate shooting and surveillance. Such groups are deployed in pairs, one with a rifle and the other as an observer. Their sets usually include laser range finders, binoculars, sensors for measuring wind and temperature, a silencer and a flame arrester.
“The hotter the air, the thinner it is, and the bullet will fly higher and farther than in other conditions,” the sniper noted. “The wind will also act on the bullet and will be demolished in the long run, and therefore, if these factors are not taken into account, the shooter will most likely miss.”

In the United States, the DARPA Advanced Defense Research Program recognizes this trend and the beginning of the One Shot program, which is developing a system that allows snipers to accurately hit targets from the first shot day and night, with side wind, at the maximum range of their actual fire.

DARPA program manager Deepak Warsney said the project began in August of 2007, with the goal of developing One Shot technology. “Before that, several subroutines were conducted to determine a reliable wind measurement technology, as well as to determine the types of technologies that need to be worked on,” he said

The One Shot system provides a measured side wind profile and distance to the target. This information is used to align the trajectory of the bullet by compensating for the influence of side wind and the bullet deviations in range, which increases the likelihood of hitting from the first shot.

The XactSystem features goal tracking, a head-up display (HUD) with head-on display, and advanced fire controls. The company claims that this technology increases a person’s abilities and reduces sources of errors, such as aiming errors, jerking the trigger and incorrectly calculating the shot.

The new TrackingPoint sniper rifle weighing 9 kg is designed to improve shooting accuracy, it uses a laser system and an environmental sensor

A company representative said that the system is modular and if the ballistic solution is designed for a specific platform, the company can apply it to any caliber. Commercial offers include .300 Winchester Magnum and .338 Lapua.

The company notes that it held shows for approximately 25 federal, local government organizations of the United States, including various military units.

As expected, the military will purchase similar technology in accordance with their plans for the 2020 year, for this purpose the Tracking-Point system was integrated with the XM2010 rifle of the American army.

Weapons are integrated into local and global networks through wireless communications, providing voice data, video and information to remote devices.

The head-mounted display is the interface through which the operator communicates with the PGF. It shows the inclusion of wireless wi-fi, the distance to the target in yards, wind speed and direction, battery life and other characteristics.

Rifle variants are divided by caliber, barrel length, chassis, use and ammunition. According to the company, additional PGF models will be introduced in 2014. 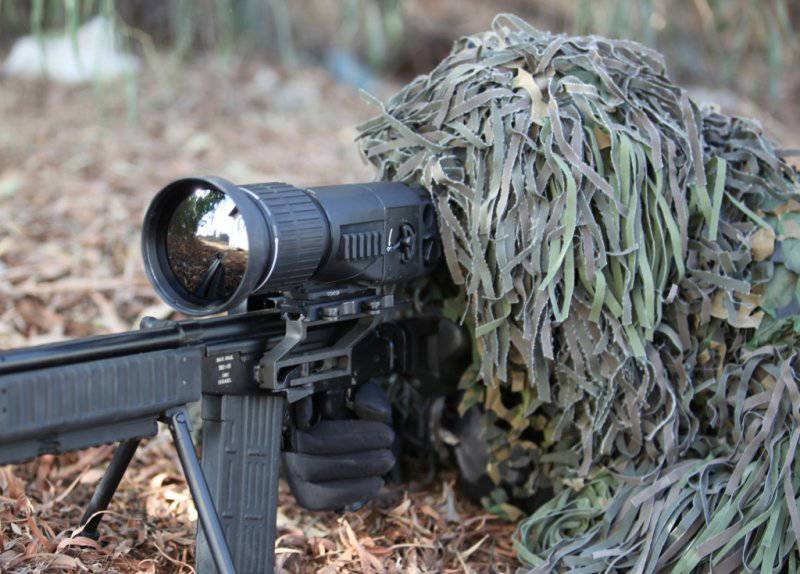 The uncooled NOA thermal sight has dual power. By switching the zoom from x7 to x3 can change modes, from observation to aiming

DARPA began the second phase of the program to make the system more flexible and capable of accepting a standard rifle sight.
“The One Shot Phase 2E [Enhanced - Advanced] stage represents further work to improve the capabilities and reduce the weight, size, and power-consuming characteristics of the system in the Phase 2 phase,” continued Warsney.

The Phase 2E system, completed at the beginning of 2013, has its dimensions reduced from approximately 6L to 3L. The next stage of One Shot XG (Next Generation) envisages the creation of a much smaller system for actual operation, which can be directly installed on the weapon with the possible exception of the observer (from the sniper group) in future sniper operations.

Cubic Defense Applications received a contract worth 6 million dollars in August of 2012 to develop and manufacture two separate stages of 12 prototypes for actual operation.

“The One Shot XG Phase 1 stage proved that the new side wind measurement technique is possible and meets the requirements,” added Warshney. “One Shot XG Phase 2 began in March 2013 of the year with the production of samples for field trials. Work on One Shot XG reduced the size of the system to 0,6L. Phase 2 is scheduled for completion in the spring of 2014.

“All stages so far have been experimental work. With the end of One Shot XG Phase 2, we will evaluate the available systems available for demonstration and transmission to military consumers. The military will determine the production schedule and the number of these systems. ” 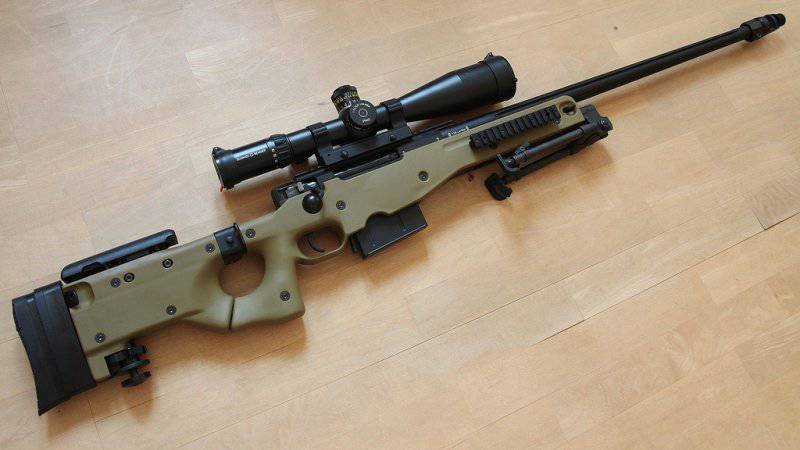 The job of 4's Scouts sniper platoon in Afghanistan will be training the snipers of the Afghan army and protecting the bases. This unit is equipped with a L115A3 long-range rifle, shooting .338 Lapua Magnum bullets and equipped with a Trijicon telescopic sight and an 5x25 Schmidt and Bender surveillance device. They also use the Sharpshooter 7,62-mm rifle.

In 2010, British media reported that Corporal Craig Harrison of the Royal Horse Guards had recorded the most distant successful sniper shot, killing two Taliban machine gunners in the Helmand province from an L11 rifle at a distance of 2475 meters.

Each rifle is prepared by the shooter individually, which is why they are so accurate when shooting and are comfortable to handle. However, due to the combination of remote observation devices, proximity of enemy forces and valuable information that groups can gather, sniper units perform an ever wider range of tasks.

“Obviously from recent combat situations, such as in Afghanistan and Iraq, that the role of a sniper on the battlefield is becoming more and more important, and he is participating in an increasing number of missions and operations,” said Zvika Lisichkin, commercial director at Meprolight.

“In addition to its traditional role in combat situations, it is also expected to participate in reconnaissance tasks, mapping and target designation and assist in advancing its forces. In the future, the role of the sniper will be further enhanced due to technological progress .., which will affect his role in modern combat. "

Meprolight's own sighting systems allow you to work for a long time, day and night, in various combat situations, including the collection of information and the detection of a shot at various distances.

“Snipers and observers in small groups or pairs are working with the sights,” continued Lisichkin. "This allows you to integrate various devices and accessories in accordance with the task of each sniper, such as night vision devices or thermal imagers." 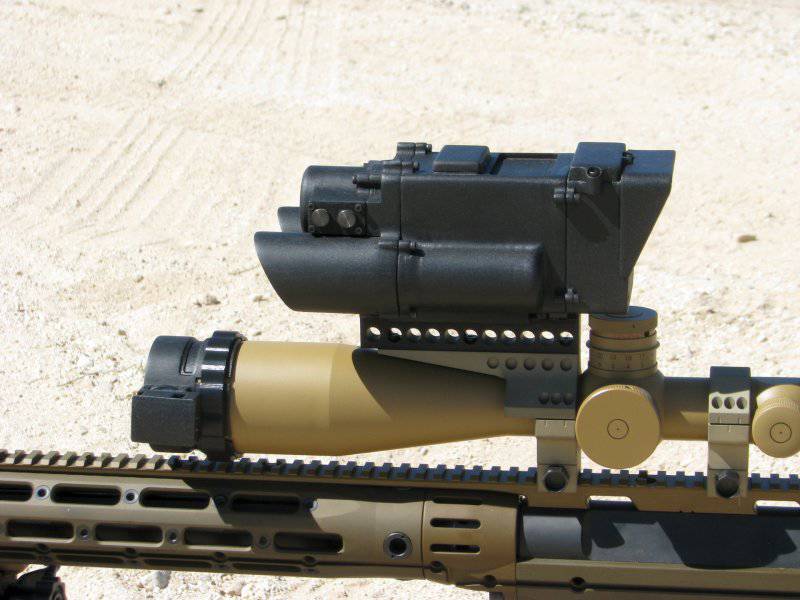 One Shot XG system developed by DARPA and and Cubic Defense

These systems can be installed on various sniper rifles of large and medium calibers for firing at long, medium and short distances. The company's NOA X7 and NOA Dual Field sniper sights are suitable for Galil, M24, SR-25, .338 Sako, .50 PGM, .50 Barrett and SSG rifles.

"Snipers of special operations forces are usually equipped with the most modern accessories, including night-vision devices, fixed and separate thermal imagers, optical tubes, while infantry snipers, as a rule, receive only day and night sight, which in most cases is a night-vision device due to the high cost thermal imaging devices, "continued Lisichkin. "The situation is changing and the current goal is to equip all infantry snipers with various modern night vision devices."

Lisichkin said that NOA X7 is a “veteran of the group” and has extensive experience in combat use in Asia, Europe and South America. The recently introduced Meslas rifle scope and Mepro NOA XT4 attached thermal imager also attracted attention, and the company expects to receive large orders for them in the coming months.

Sharpshooter 7,62 rifle and accessory kit used by the 4 Scouts sniper platoon on their way to Afghanistan to participate in the operation of Herrick 19

The NOA sighting system is designed for sniper rifles with x7 magnification and is suitable for ten ballistic tables. This means that they can be mounted on ten different rifles using ammunition from 7,62 mm to 12,7 mm. The parameters of rifles, such as tactical and technical characteristics of the weapon, the position of the sight and the used cartridges, are calculated in order to improve the quality of the shot.

In September 2013, Leupold & Stevens and Aimpoint announced that they had each received a five-year contract from the US Navy Surface Weapons Research Center under the ECOS-O (Enhanced Combat Optical Sight - Optimized) program.

A representative of Aimpoint said that supplies for SIC had already begun. The contract was issued in March 2013 of the year after the 13 months of open competition.

Under the terms of the contracts, the Micro T-1 and 34-mm mirrored sights of the adapters will be attached to the Leupold Mark 6 surveillance devices for subsequent delivery to the units of the army, air force and marines.

The ECOS-O system has an overall length of less than 30 cm and weighs 970 grams. It provides a wide field of view and can quickly capture a target, because it has a small mass. According to Leupold, adjustable diopters and continuous x6 magnification allow the operator to adapt optics to any field conditions.

The combination of Aimpoint Micro T-1 and Leupold Mark 6 is a very effective optical kit that gives snipers a real advantage when performing a variety of combat missions.

Developments in the industry of weapons devices and accessories ensure that current weapons use their full potential. Further advances in this area will mean that the sniper rifle will become a valuable universal component in the military's toolkit.