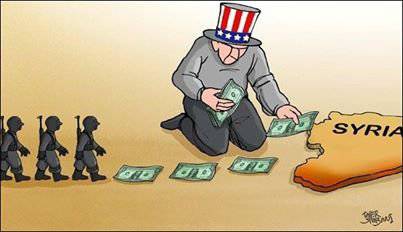 It is difficult to talk about successes or about the failure of the Geneva-2 conference, but one definite plus from it was that Syria got the podium, got the opportunity to express its point of view on the international arena. The voice of truth has been drowned out all these years, and even at this event, UN Secretary General Ban Ki-moon tried to interrupt the SAR foreign minister Walid Al-Muallem. But he managed to tell the truth about what is happening in the country to the whole world, to tell about what was carefully hidden from the Western public by biased media.


"On our shoulders lie the three-year suffering of the whole country. The moment of truth came, despite the campaign of deception, murder and terror," he began his speech.

Unfortunately, he continued, in the hall are representatives of countries whose hands are the blood of Syrians. “These countries,” he said, “tried to teach Syria the lessons of" democracy and progress, "but they themselves live in backwardness and drown in their own ignorance. These countries are fully owned by kings and princes, who have the exclusive right to dispose of their national wealth. "

Speaking about the crimes of the bandits and citing specific examples, the head of the SAR Foreign Ministry stressed: “They plunged the country into the mud, but now the masks are torn off, we see what they are trying to achieve, they want to heat up the situation in the country, pump over petrodollars to mercenaries, behave like barbarians and hide behind the goals of the "revolution". "You have done nothing. You only disgraced Syria by appealing to the United States to launch an armed attack on our country," he said, referring to the so-called "opposition."

Speaking about the role of Turkey, Al-Muallem said: "Syria received a stab in the back from its neighbors. The Erdogan government launched terrorists into its lands."

He also recalled that Syria opened the doors to employees of all media, but it was the terrorists who repeatedly opened fire on foreign journalists. In addition, Syria allowed all international humanitarian organizations to perform their tasks, but the terrorists also shot at their employees.

According to him, the West, which is trying to imagine that it is fighting terrorism, actually supports terror, helps the bandits and sends weapon not only to Syria, but also to Iraq. As a result, these weapons fall into the hands of al-Qaeda.

In response to the words of Kerry, who once again turned his barrel-organ on the theme “Assad must leave,” the Syrian representative said: “Nobody, nobody in the world, Mr. Kerry, has the right to declare the president or the government in Syria legitimate or not, except for the people” .

“Our task here is to convey to the world the will of the Syrian people, and not to decide their fate,” he added.

On behalf of the Syrian people, Al-Muallem thanked Russia and its people. "Russia showed itself as a true friend and supported the principles of sovereignty laid down in the UN Charter.

He added: "China, the countries of the BRICS, Africa, Latin America, Iran, Iraq have supported us by defending the interests of the Syrian people and not supporting the position of hostile countries."

At the end of his speech, he said: “I would like to emphasize that Syria is an independent state and will do everything it considers necessary to protect itself, not paying attention to the statements of other states.”

Unfortunately, the speeches of many others present at the Geneva-2, as expected, were filled with anti-Syrian rhetoric. Saudi Foreign Minister Saud Al-Faisal made a very controversial statement, saying: “Our participation in this conference is based on the language contained in the invitation of the UN Secretary-General. We must act in strict accordance with the Geneva communique, we must discuss the establishment of a transitional authority in Syria. At the same time, it is necessary to proceed from the assumption that the Assad regime should not participate in further processes in the country. ”

A lie of pure water! The Geneva communique does not contain a word about some kind of “regime” that “should not participate”. On the contrary, it says that such decisions are made by the Syrian people without outside interference. Particularly cynical such statements look against the background of the fact that in Saudi Arabia itself there is a real dictatorial regime, where it is still forbidden for a woman to drive a car, and for any dissent they are immediately imprisoned, where medieval methods such as punishment are used whipping, head chopping, stoning.
Al-Faisal also called for the withdrawal of "foreign mercenaries" from the territory of Syria, as he said, including Hezbollah and the Iranian National Guard. The problem is that the Iranian Guard is in Iran, and the Hezbollah forces were forced to join the fight against terrorist mercenaries who had attacked not only Syria, but also Lebanon, organizing terrorist attacks and other crimes there. And if we talk about foreign mercenaries, the number of Hezbollah fighters fighting on the Syrian-Lebanese border with gangs is much smaller, even incomparable with the number of those who were recruited by Saudi Arabia to participate in terrorist groups. The SA even released frank murderers, rapists and sadists who were imprisoned in its territory for various crimes, provided that they went to Syria to act in the ranks of armed groups.

The speech of US Secretary of State John Kerry was also full of hatred for Syria. In his opinion, all the problems of the SAR are that “Assad does not want to leave.” Although it is - a brazen juggling of the position of the Syrian leader. After all, Bashar Al-Asad himself always spoke, and in his interview with Agence France-Press on the eve of Geneva-2, he reiterated that he was ready to leave if the Syrian people wanted it. But this issue should be resolved legitimately. “I am not the person who clings to power. In any case, if the Syrian people do not want me to be president, it is obvious that they will be someone else. For me personally, there are no problems with that, ”said the president.

That is, the problem, unlike Kerry’s insinuations, is not at all that “Assad does not want to leave.” It is completely different - the United States does not want to hold free elections, which would show who will be president. It turns out that the United States is simply afraid that their calculations will be wrong, and the recalcitrant leader will again be elected to the presidency?

Cowardice is shown not only by the United States, but also by their puppets. The leader of the so-called "opposition" Ahmad Jarba simply ran away from the conference the very next day. He was afraid to conduct direct negotiations with Walid Al-Muallem, although this was provided for by the format of the event. Left instead of his servants. And then he furnished everything with a bunch of conditions under which government delegations and “opposition” should sit in different cabinets, and between them as an intermediary should run like an errand boy, 80-year-old UN special envoy to SAR Lakhdar Al-Ibrahimi. Apparently, the “oppositionists” know that they must be arrested by any legitimate representative of the Syrian government, and they fear this.

Meanwhile, in Syria itself, attacks and shelling by this very “opposition” continue, which in Geneva is even afraid to sit at the table.

The terrorists fired several mortar shells at residential blocks of Damascus. In the Abu Rumani area, one of these shells exploded next to the Japanese embassy. Only by a miracle there were no casualties, since the area is located almost in the center of the city and is quite lively.
Residents of Shakib Arslan Street were less fortunate - four people were wounded as a result of a similar shelling.

In Hasaka province in Al-Malkia, a suicide bomber blew himself up in a mined car. It happened on the market. The attack claimed the lives of five people. Another 10 were injured. Separated many trade pavilions on the market.

In the city of Homs, terrorists bombed residential buildings in Al-Inshaat with a mortar. Four residents of the city suffered. In the neighborhoods of Karm Ash-Shami and Hamra, shells also exploded, causing material damage. In the province of Homs in the small village of Abu Al-Alay, as a result of shelling, citizens' houses were also damaged.

In the province of Daraa in the city of Bosra ash-Sham, five citizens were injured as a result of terrorist shelling.

Negotiations in Geneva continue, the crimes of terrorists - as well.