Fears for the Poles 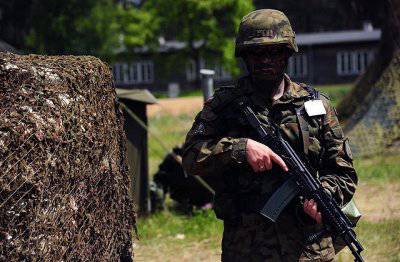 Over the past few months, the military and political leadership of Poland had to repeatedly change diapers and drink more than one bottle of valerian thanks to the hype raised by the Polish media about the “growing threat” from the Russian Federation.


Why all? But because the Polish political elite lives according to one simple rule: “If something is said, they are spoken somewhere, but are not officially reported, then this does not concern us”. But, as soon as on TV screens or on the front pages of newspapers there are messages about the next “insidious plans of the Russian bear”, Polish politicians and generals panic and start vying for threats emanating from “barbarous Russia”.

A striking proof of this was the rumor widespread in November 2013 by the German magazine Bild about the deployment of the Iskander operational tactical missile systems in the Kaliningrad region. Then politicians and military men of all levels shouted about the terrible threat looming over "peace-loving and democratic" Poland. The fear of the Russian Iskanders so swept the Poles that even the Polish Silesians expressed a desire to leave Poland and addressed a letter to Vladimir Putin not to send missiles in their direction.

The Russian president heard the plea of ​​a multimillion Poland and informed the Polish public that there were no Iskandars in the territory of the Kaliningrad Region. Political beau monde of Poland shut up, as if on cue.

But for a short time the long-suffering Polish people lived in peace and quiet. Another shock for Poland was the announcement of a transfer to the Navy the fleet Russian new nuclear submarine "Alexander Nevsky" with ballistic missiles on board. And again, people began to dig shelters in the courtyards of their houses, because in Warsaw they forgot to clarify that the Alexander Nevsky nuclear submarine is not the result of a sharp rearmament of the Russians, but only the effect of a very belated process of replacing old submarines with new ones. It has long been no secret to anyone that according to the officially announced plan, by 2020 the Russian Navy should receive eight nuclear submarines of project 955 Borey with 16 ballistic missiles and five submarines of project 955A Borey-A with 20 missiles, while the total number of submarine fleet will decrease.

No sooner did the Poles forget about Iskanders and Boreas, when a new misfortune came to their house. The successful 24 test report of December 2013 of the RS-24 “Yars” intercontinental ballistic missile at the Plesetsk test site again forced Polish politicians to buy new diapers and drink more than one package of valerian. But the training launch of 17 in December last year, the American missile "Minnetmen-3" for some reason did not cause panic among the Poles. Then it was even worse, because the Poles celebrated Christmas under the roar of the engines of the Topol mobile missile system, and again the authorities forgot to say that the warhead had gone in the opposite direction from Warsaw.

The year ended and the fears of the Polish people should have remained in the past, but they did not allow the Poles to sleep peacefully in the new 2014. When the Russian plans for the modernization of the armed forces determined to procure for aviation The Navy has 50 multi-purpose aircraft; no one in Poland paid attention to this. Everything was decorous and calm. But as soon as it was announced that these aircraft would go into service with the aircraft of the Pacific, Black Sea and Baltic fleets (in relation to the latter - this is the Kaliningrad region), then again the Poles increased pressure and spoiled their mood. After all, a dozen Su-30SM near the Polish border, radically changes the situation in the region and poses a threat to security for the Polish state.

It’s just that, showing the power of Russia to the Polish public and the danger it poses to the "civilized society", the military-political leadership of Poland, in turn, belittles the true state of the Polish Army. At the same time, it seems to be forgetting that lately NATO has been present in Poland in various formats. Thus, to build up the aviation grouping in the country, according to the standards of the alliance, seven aerodromes are equipped, capable of receiving all types of aircraft. In order to ensure the actions of the grouping of troops, five forward fuel and lubricant bases are located in the region. The 3 th communications battalion and the Allied Training Center are stationed in Bydgoszcz. In addition, on the territory of the country, the Patriot anti-aircraft missile systems were deployed on a rotational basis, and now F-16 fighters and C-130 transport aircraft of the US Air Force are currently on a rotational basis. The plans for the deployment of elements of the American missile defense system, which should appear in 2018, remain relevant. To this it is worth adding the fact that from 2014, Poland will become a full member of the AGS (Alliance Ground Surveillance) alliance program, and RQ-4 "Global Hawk" UAV will be deployed on its territory.

The Ministry of National Defense plans to spend about 10 billion zlotys on modernizing the armed forces over 140 years. The goal of such a forceful re-equipment of the army, according to military experts, is to bring the Polish Army to NATO standards. As the representatives of the military-political leadership of Poland have repeatedly stated, equipping the ground forces, air force and navy with modern weapons is intended to “intimidate” potential adversaries. The main weapons "Intimidation" should become guided long-range missiles of land, air and sea-based.

Unfortunately, the Poles are not explained that by increasing their military potential, Poland openly provokes Russia. And as soon as the Russians react (quite adequately), then immediately there is a cry. But every year this crying sounds all fake and false. Not only does Russia begin, as always slowly (at first), to deploy its power towards the Polish provocateur, so after such hysterics one can lose the confidence of his Polish people.

Ctrl Enter
Noticed oshЫbku Highlight text and press. Ctrl + Enter
We are
Polish script Russian blitzkrieg. Doctrine "Polish fangs"Results of the week. “Why is the war going on? Do they not read newspapers? ”
Military Reviewin Yandex News
Military Reviewin Google News
71 comment
Information
Dear reader, to leave comments on the publication, you must sign in.