Military orders and medals of the Soviet Union. Order of Bogdan Khmelnitsky

January 24 2014
7
The order of Bogdan Khmelnitsky is the fourth and last among all the commanders of the USSR. It was last established - in 1943, during the days of liberation of Ukrainian territory by Soviet troops. This order could be awarded not only to commanders of army units operating on the front and fleet, but also the rank and file and staff of army units. In addition, this award could be given to the commanders and participants of partisan formations and detachments, which during the war acted on the territory occupied by the enemy. At the same time, one of the main features of the award was its design. It was the only Soviet order, the inscription on which was executed in Ukrainian, and not in Russian. It was also the only military order, one of the degrees of which the rank and file could be awarded.


The idea of ​​establishing a new award belonged to the famous film director A.P. Dovzhenko, who in 1943, as a war correspondent, worked on the new documentary film “The Battle for our Soviet Ukraine”. However, there is another version of the appearance of this order. According to her, the idea belonged to Lieutenant General N. S. Khrushchev, who at that time was a member of the military council of the 1 of the Ukrainian Front. In any case, this idea was supported by the Soviet command. 13 artists took part in creating the sketch for the future award. The winners were the graphic artist A. S. Pashchenko and the artist N. I. Moskalev. The variant they proposed was a five-pointed silver star, which was superimposed on a gold one. In the center was a circle with the image of Bogdan Khmelnitsky. The decree on the establishment of a new military order was signed by the USSR Supreme Council 10 October 1943.

Externally, the Order of Bohdan Khmelnitsky I degree was an image of a five-pointed convex star. The surface of this star was made in the form of rays diverging to the sides. In the very middle of the order there was a circle of gold, which was edged around the edge with a figured silver rim. In the center of this circle there was a bold relief image of the hetman of Ukraine Bohdan Khmelnytsky, in his right hand he had a mace. At the top of the circle on the edge was the inscription "BOGDAN KHMELNITSKY", made in the Ukrainian language. In the intervals between the ends of the golden star, there were five beams of silver rays, these rays coming out from under the figured rim. The Order of Bogdan Khmelnitsky I degree was made from gold with silver beams and a silver rim in a circle. The gold content in the order was 19,332 g, silver - 26,676 g, the total award weight was 42,0 ± 1,8 g. 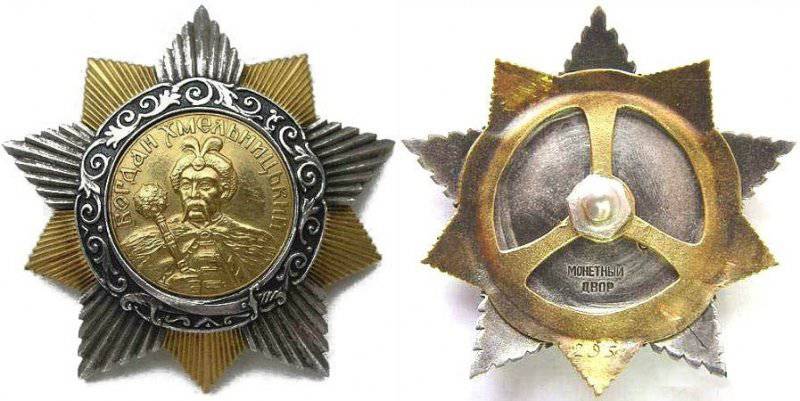 Order of Bogdan Khmelnitsky I degree

The Order of Bogdan Khmelnitsky II degree had the following differences. The convex five-pointed star was made of silver, and the circle, as in the order of the I degree, was made of gold. The gold content in the order was 6,507 g, silver - 35,385 ± 1,256 g, the total weight of the award was 43,9 ± 1,6, the Order of Bogdan Khmelnitsky III degree was completely made of silver, the convex five-pointed star on this order had polished faces. This award was smaller. The dimensions of this order between the end of the beam and the opposite end of the star were 45 mm, for orders of the I and II degrees, this distance was equal to 56 mm. The content of silver in the order of the III degree was 29,554 ± 1,369 g, the total award weight was 32,0 ± 1,5.

On the back of the award were a nut and a threaded pin for attaching orders to military uniforms and other clothing. A silk light blue moire ribbon with a width of 24 mm relied on the order. White longitudinal stripes were applied on the tape. For the I degree - one strip in the middle (width 5 mm); for the II degree - two lanes along the edges (width of each 3 mm); for the III degree - three bands, one in the middle and two along the edges of the tape (width of each 2 mm).

The Order was originally approved in three degrees, the oldest of which was the first degree. The Statute of the Order assumes the awarding of Red Army and Navy personnel (an important addition, all other orders were handed over to "land" military leaders), as well as partisans and leaders of the partisan detachments who showed selflessness, courage, determination, high patriotism, and demonstrated high combat training in conducting operations to destroy the enemy. 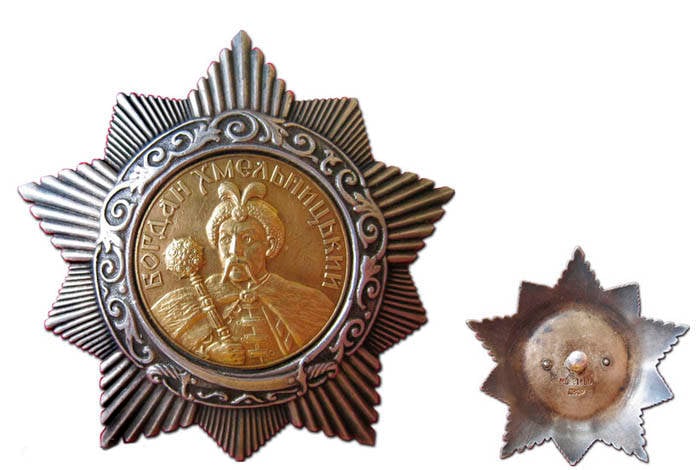 By the order of the I degree, they represented the commanders of fronts, armies, fleets, flotillas, commanders of partisan formations, as well as their deputies. They could be awarded the Order of Bogdan Khmelnitsky I degree for successfully carried out operations under their direct command, the result of which was causing the enemy serious losses in manpower and equipment.

Commanders who had a corps, division, brigade or regiment, as well as commanders of partisan detachments, represented the Order of the II degree. They could be awarded the Order of Bogdan Khmelnitsky II degree for the skillful organization and conduct of military operations, during which they managed to break through the defensive line of the enemy or successfully force the water line, as well as destroy the enemy’s garrison or break the lines of communication and communications of the enemy.

Ordinary fighters of the Red Army, Navy, partisan detachments, as well as junior commanders (sergeants, sergeants) and junior officers presented themselves to the Order of the III degree. They could be awarded the Order of Bogdan Khmelnitsky III degree for their persistence, courage, and personal initiative in combat when performing command combat tasks with inflicting significant damage to the enemy and disrupting his combat operations.

For the first time in stories The Order of Bogdan Khmelnitsky was awarded 26 on October 1943 of the year. Order of the I degree with the number 1 was awarded to Major-General A. I. Danilov (the day after he received the rank of Lieutenant-General), commander of the 12 army belonging to the 3-th Ukrainian Front. He was presented to this award for the liberation from the Nazi invaders of the city of Zaporozhye. Later, other well-known Soviet generals — M. E. Katukov, P. K. Koshevoi, K. S. Moskalenko, D. D. Lelyushenko, A. A. Grechko, and others — became holders of this order. Well-known leaders were also presented for the award. the partisan movement S. A. Kovpak, A. N. Saburov, M. I. Naumov, and others. 10 military units also received this military award. The list was opened by the Czechoslovak Brigade under the command of Ludwig Svoboda, which was marked by the command for the battles to liberate the city of Belaya Tserkov. 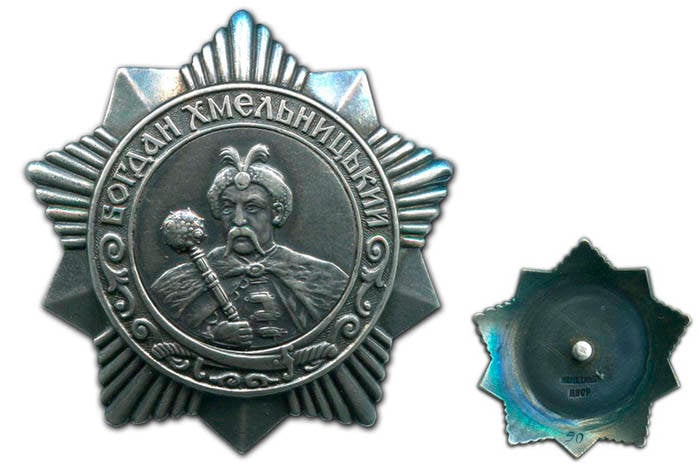 The first owners of orders of the II degree were Lieutenant Colonel I. A. Kaplun (commander of the rifle brigade) and Major B. V. Tarasenko (commander of the sapper battalion). They distinguished themselves when crossing the Dnieper, ensuring the crossing of troops and equipment and seizing a bridgehead on the right bank of the river.

The first in the USSR decree on awarding the Order of Bohdan Khmelnitsky III degree was issued only in January 1944. For the award were presented 10 Soviet partisans. They were awarded for personal feats during the operation to free Ovruch. Among those awarded were I. Kalashnikov, who hoisted a red flag on the tallest building in the city of Ovruch, as well as the partisan intelligence officer E. Boldyreva.