Lithuania and Moldova, and maybe come back? 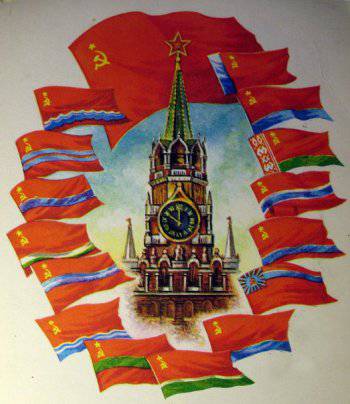 The American Gallup Institute (Gallup) published the results of a survey conducted among citizens of former Soviet republics - how they relate to the collapse of the USSR. The answer has taken aback American sociologists. It turns out that only 24% of former Soviet citizens saw this as a positive thing. While 51% considered that the collapse of the USSR caused harm both to them personally and to the republics (now independent states) where they lived.


For a start, the prehistory. In one of the long-standing analytical programs of the BBC about the Soviet Union, Western experts cited the following data: in the first quarter of 1983, production in the USSR increased by 6,3% and labor productivity by 4,7%. The moderator’s comment: “The changes that are taking place in the Soviet Union indicate that socialism harbors such internal reserves that the Soviet leaders themselves did not seem to know about.” Two years later, the USSR was headed by a new leader, Mikhail Gorbachev, and these reserves were unclaimed, having sunk into oblivion along with the country that had not realized them.

Most experts Gallup struck a slice of opinion in Ukraine and Moldova. In “Square”, despite Maidan, 56% of respondents have a negative attitude towards the disappearance of a single great country, and only 23% see this as a benefit. In Moldova, which initialed an association agreement with the European Union, where the Constitutional Court recognized Romanian as the state language, 42% of citizens continue to see more harm in the collapse of the USSR, but 26% saw the benefit. The Russians are also not thrilled with the “ballast discharge”, as some democratic politicians have presented with the division of the USSR: 55% of respondents see it as a harm, only 19% is a benefit.

Like this. After twenty years of cultivating isolation (switching to the Latin alphabet, a feverish search for one's own historical roots leading away from any community with Russia, violent religious propaganda with a strong admixture of nationalism, the reduction of all negative phenomena and events of the past, as well as contemporary problems to the Russian root cause), finally, something that unites everyone was found. This is a positive attitude towards the former unity, and a negative attitude towards modern independence.

Movement along its own development trajectories, with a gradual deliverance from the Soviet legacy, turned out to be for the peoples of the latter-day states a road to a worse life. Most of the former Soviet citizens interviewed are disappointed with their post-Soviet rulers and greedy new elites. The lion's share of their promises did not materialize, which not only strengthened the nostalgic feelings of older generations, but also increased the number of USSR fans among young people — they also wanted to go to a “fabulous” country called the Soviet Union. And the thing is not even in the shock economic therapy with which the liberals treated “sovkovy” Russia in the nineties. The point is the general paradigm shift.

In December, the American research organization Pew Research Center announced the results of a study on how Lithuanian, Russian and Ukrainian citizens assess the changes in 2012, 1991 and 2009. Note that the reforms in these states were carried out by different people and under different scenarios. So, the emergence of a market economy in 2011 was supported by 1991%, in 76-m - 2009%, and in 50-m - only 2011% of Lithuanians, one of the first to break free from the “yoke” of the Soviet economic and political system. According to the respondents, the changes over the past twenty years have been beneficial to politicians (they were called 45%) and entrepreneurs (91%), and not to ordinary people (78%). 20% of respondents in the republic said that the last twenty years had a negative impact on the quality of life. 56% of Russians and 61% of Ukrainians responded in the same way.

According to the Russian Levada Center, in 2012, in the Russian Federation there were 29% supporters of the Soviet political system, and in 2013, it was already 36%. At the same time, the percentage of supporters of Western democracy decreased (22% versus 29%). Sociologists also asked what economic system seems to be more correct for Russians. 51% named a model based on government planning and distribution (in 2012, these were 49%). The system, which is based on private property and market relations, was supported by 2012% in 36, and for the next year even less - 29%.

Yes, and other sociological studies show that more and more Russians are convinced that the cause of economic difficulties, both past and possibly waiting for us ahead, was the wrong choice of development path.

Understanding that the collapse of a single state with an economy capable of producing everything, from children's nipples to moon rovers, has turned the former Soviet republics into a global periphery for servicing global capital, is becoming increasingly widespread. Hence the growth of nostalgic feelings, the romanticization of the USSR and the increase in centripetal moods, expressed in interest in the Customs Union and other, closer types of integration.

Hence the growing opposition to these sentiments by the main beneficiaries of the dismemberment of the USSR. So, at the conference on human rights in Dublin 6 in December 2012, before meeting with Russian Foreign Minister Sergey Lavrov, US Secretary of State Hillary Clinton spoke out quite clearly about the Customs Union. “We know what the goal is, and we are trying to develop effective ways to slow down or prevent it,” she said. So, the origin of the color revolutions, the “Euromaidans”, the endless political crises like the Moldovan one, the “Saakashvili phenomena”, the vigorous work of the so-called non-governmental organizations and similar subversive activities are all quite understandable. The world political and economic strategists, who are the authors of the successfully implemented concept of planetary globalization based on the principle: the financial and high-tech center, the raw material periphery, have done too much for the demise of the USSR to allow its revival in any form.

The reasons that ordinary people with growing warmth and respect remember the times of the Soviet Union, not only in the economy. Psychologists believe that there is a subconscious attempt to find protection from the total, including interpersonal, negatives that have grown to incredible dimensions. People everywhere became wicked. Angrier, more aggressive, more greedy, more selfish, more unprincipled, more ruthless, more powerful and self-interested. And this, as it turned out, does not help build or live.


Socialism worked to develop all the best in man. And it bore fruit. “Even in the late Soviet period, despite the fact that in times of queues and shortages, another person was perceived as a competitor in the struggle for basic necessities, relations between people — including different nationalities — were quite benevolent,” the deputy director of the Institute of Psychology says RAS Andrei Yurevich.

Yes, both the USSR and the system of world socialism created by it were not without flaws. But the “ideal state” existed only in the fantasies of the ancient philosopher Plato. The unjustified thirst for Western models turned out to be the “Trojan horse” by means of which the unique state of the Soviet Union, built with such difficulty and at the cost of such victims, was destroyed. For the authorities and elites formed on its ruins of sovereign powers, mass nostalgia for the USSR is a wake-up signal. People without any agitation and PR technologies have elevated the past to the rank of a standard with which they compare their present life and about which they tell children and grandchildren in the kitchen. While the comparison is not in favor of modernity. And this blurs the socio-political and economic sustainability of the state: after all, people will consciously or unconsciously resist further attempts to divert them to the other side.

Few people know that they remember warmly pre-perestroika times in the countries of the former socialist community. The most striking were the results of a sociological survey conducted in 2010 by the Emnid public opinion research institute in Germany. 80% of residents of the former GDR and 72% of respondents in Germany stated that they could well now live in a socialist state. Two decades later, after the fall of the Berlin Wall and the unification of Germany, only 28% of respondents in the east of the country said they consider the acquired “freedom” as the main political value. The German leadership, led by former East German Komsomol activist (FDJ) Angela Merkel, was shocked by these results. Since then, such studies in Germany can no longer be heard. But in other countries the results are no less eloquent.

Thus, in the Gallup World ranking, compiled in three categories - “prosperous”, “struggling” and “suffering” people, according to the results of 2012, the people of Bulgaria became the most suffering. 39% of its residents called themselves unhappy. The once-thriving Hungarians also entered the world's top 5 sufferers. 32% of the citizens of this country, who were once envied even in the USSR, also consider themselves unhappy. Romanians remember with nostalgia the times of Ceausescu. Similar studies state the same in most of the states created on the ruins of the Yugoslav federation, states the Serbian publication Politika Online.