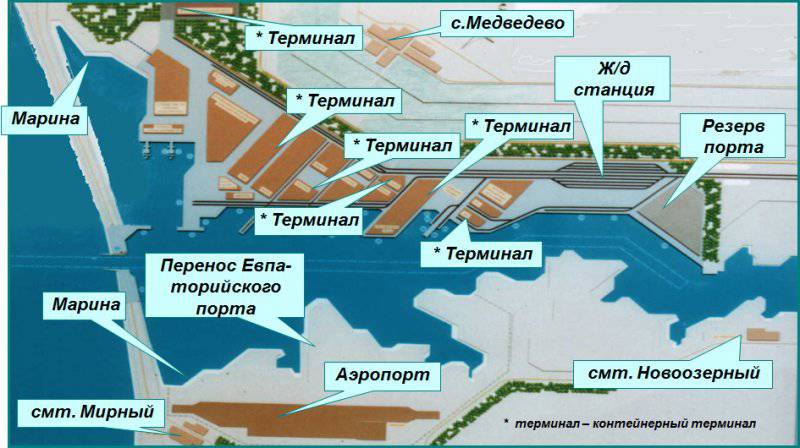 Events that have recently taken place in the Ukrainian capital have eclipsed everything that is happening in the country. Meanwhile, outside of Kiev, something is happening that in the near future may have major consequences for Ukraine.

This, first of all, is that the Crimean authorities signed a Memorandum on the implementation of the project in the sector of the agro-industrial complex with China. According to the agreement, the largest Chinese companies intend to invest billions of dollars in the modernization and development of some systems and technologies, in particular, the irrigation system, logistics, storage of agricultural products, etc. One of the most interesting parts of the contract is the idea of ​​building a large grain terminal on the basis of one of the ports of the Crimea.

All financing for the project was undertaken by one of the largest Chinese banks. As the Crimean authorities promise, all the land on which the project is planned to be implemented will be transferred to the Chinese for rent, therefore the status of the lands of Ukrainian state ownership will be preserved.

The signing of the Memorandum is the next step in the implementation of the agreement signed in December by V. Yanukovych and the government of the PRC. The visit of the head of the Ukrainian state fell on a period of aggravation of the political and economic crisis of Ukraine. Therefore, many experts were confident that Yanukovych went to China for regular loans. However, the president did not bring any money from the trip, and the details of the negotiation process remained unknown.

Recall that the idea of ​​building a cargo deepwater port with a grain terminal in the Crimea is not new. At the moment, the authors of the agreement have chosen the neighborhood of the city of Evpatoria as the location for the project. The project from the Ukrainian side will be implemented by businessman A. Mazyuk, who managed to attract as an investor billionaire from China Wang Jin (initiator of the construction of the similarity of the Panama Canal in Nicaragua).

According to the agreements, the water area and port infrastructure will be initially erected on land, and then flooded with water and connected to the sea through the destruction of the spit that separates the sea and the Bogayly lake. The depth of the water area of ​​the port is supposed to be about 25 meters. And for the unimpeded passage of large ocean-going vessels, it is planned to build an 9-kilometer shipping canal. The port, the total cargo turnover of which will be more than 140 million tons, will be annually Ro-Ro terminal, container terminal, bulk cargo terminal, as well as a grain terminal. The total cost of the first stage of the project, according to preliminary estimates, is about 3 billion dollars. Its implementation is planned for the next five years.

According to Deputy Prime Minister of Crimea Rustam Temirgaliyev, the port will be intended for export of agricultural products and grain to China from Ukraine. The Chinese, in turn, intend to use this port to supply their engineering products to the countries of Eastern Europe.

Thus, it becomes almost obvious that the Chinese side intends to use Ukraine as a platform for the production of agricultural products - of course, for the needs of their country. This is confirmed by some messages that periodically appear in the media. So, in particular, it is reported that China has leased about 3 million hectares of farmland in Ukraine for half a century (this is about 5 percent of the total area of ​​Ukraine). The main purpose of the lease is pig breeding and crop production. This fits well with the new development strategy of China, which was proclaimed by the ruling party last year. In accordance with it, China intends to withdraw from its territory to third world countries a significant part of agricultural and industrial production.

Until recently, the Chinese authorities lined up such a format of relations exclusively with African states, into which the most harmful industries were very active and where the raw materials needed by the Chinese were mined. If we analyze the African experience, it becomes obvious that the Chinese are not particularly worried about the leased territories. Therefore, Ukraine, in all likelihood, should expect the use of various agricultural, biological and chemical technologies and, as a result, the total unsuitability of leased land.

If we talk about the construction of a large port in the Crimea, then first of all it is necessary to understand how the appearance of a large industrial zone can affect the resort city. Some experts are confident that the construction of the shipping channel will cause a constant draw of sand from the coast of the resort. Separately, you need to talk about freight terminals. If millions of tons of cargo pass through them, their treatment will certainly cause severe contamination of the area around the port and the adjacent water area. In addition, the creation of a large transport and transshipment hub for the redistribution of commodity flows will lead to an increase in the load on the road and railway infrastructure (and, consequently, to problems in the field of ecology).

According to the agreements reached, Ukrainians will work in the port and agricultural infrastructure created by the Chinese. But if we take into account the fact that the local labor force is estimated quite high, it can be assumed that these agreements will be violated, and Chinese specialists will eventually work on the capacities.

It should be noted that the idea of ​​building a Chinese port in the Crimea is not new. China’s interest in the western coast of Crimea has been stable since the beginning of the 1990s. At the end of 2011, in the framework of the visit of the Crimean delegation headed by Deputy Prime Minister Pavel Burlakov, a memorandum of cooperation was signed between the Chinese engineering industry corporation, EXIM Bank and the Council of Ministers of Crimea. At the same time, the project "Western Crimea" was presented, the essence of which was to transform the coast into a similarity to Antalya. However, he failed because there was not enough land on the west coast to create Crimean Antalya.

And now the Crimean authorities have again signed a memorandum of cooperation with China and intend to implement this large-scale project, even though there is still no free land on the Crimean coast. Of course, nowadays it’s too early to say that the Chinese will build a deep-water port in the Crimea. And it's not just that the location of the future port is not even determined exactly. According to environmentalists, the construction of such a complex on the west coast of Crimea is simply impossible, because there is an extremely fragile sea-to-coast system.

Certain concerns are also caused by the fact that the Chinese intend to implement their project on the western Crimean coast. And the reasons for this may be several. The first is that the Chinese really need to expand their transport and food infrastructure, and therefore they don’t care about any problems. However, there is also a suspicion that the companies BICIM and HKND Group, which will be engaged in construction, are just a cover for the Chinese government, which is trying to expand its influence in the world. The second reason is already in the Ukrainian partners. PJSC Southern Investment Company, Suesta and SendInterMarin have no experience in the construction of ports, but at the same time the loudest scandals about the illegal mining of sand in Donuzlav are connected with them. And the problem is that the whole territory from this lake to the village of Frunze is the Karkinitsky Bay, covering Evpatoria and the nearby health resorts in Saki. It is in this bay that shallow deposits of sea sand are located at a shallow depth. Therefore, the agreement also focuses on the deep-water port, which guarantees the deepening of the bottom to 25 meters (and this is many millions of tons of valuable sand and, consequently, a huge environmental damage). The fact is that the Black Sea has a feature of “licking wounds” at the bottom with its waves, in other words, it washes away sand and pebbles from the coast.

According to the Crimean experts, the Ukrainian partners are misleading the Chinese side, and this project is nothing more than an illusion that will never be realized. But under it will be allocated solid money, of which to pocket a couple of percent is a holy cause. And then ... further, as lucky. They may say that it is impossible to implement the project, because there are no suitable conditions ...

Ctrl Enter
Noticed oshЫbku Highlight text and press. Ctrl + Enter
We are
Russia, Turkey and the "Crimean Question"Situational analysis of the death of the MH17 flight (Malaysian Boeing 777), made on the basis of engineering analysis from 15.08.2014
Military Reviewin Yandex News
Military Reviewin Google News
27 comments
Information
Dear reader, to leave comments on the publication, you must sign in.