On the needle at the "peacemakers" 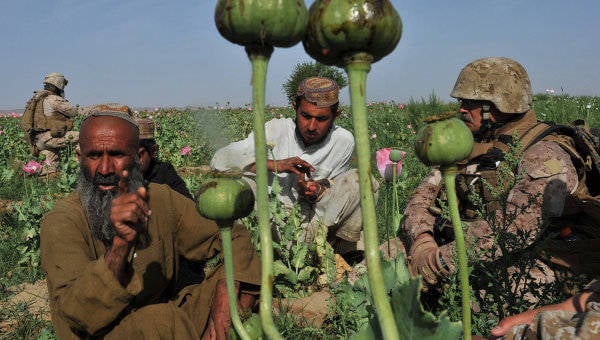 For the third year in a row, the occupation of NATO troops, Afghanistan has been setting records for the number of cultivated opium poppy. According to a report by the United Nations Office on Drugs and Crime (UNODC), in 2013, the opiate crops in Afghanistan took up record-breaking areas for the entire time of observation. Despite the unfavorable weather conditions, especially in the western and southern parts of the country, the poppy plantations together took more than 209.000 hectares, exceeding the previous year's figure by 36%.

Tab. 1. According to the report for two decades. 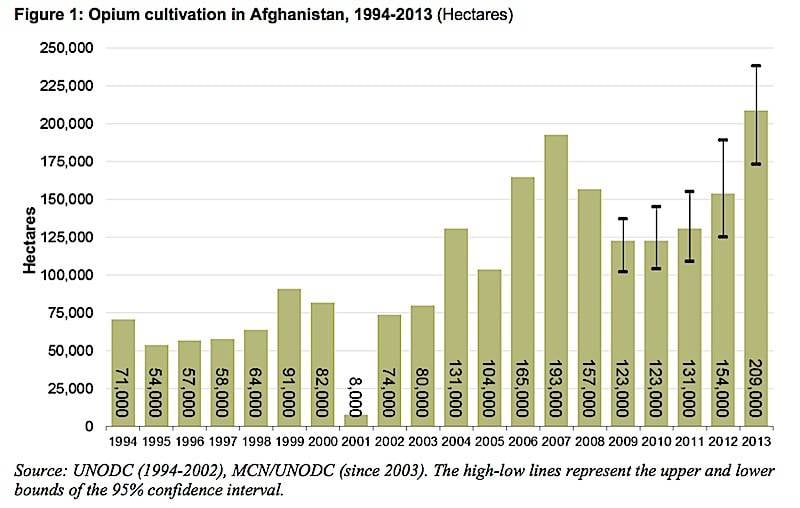 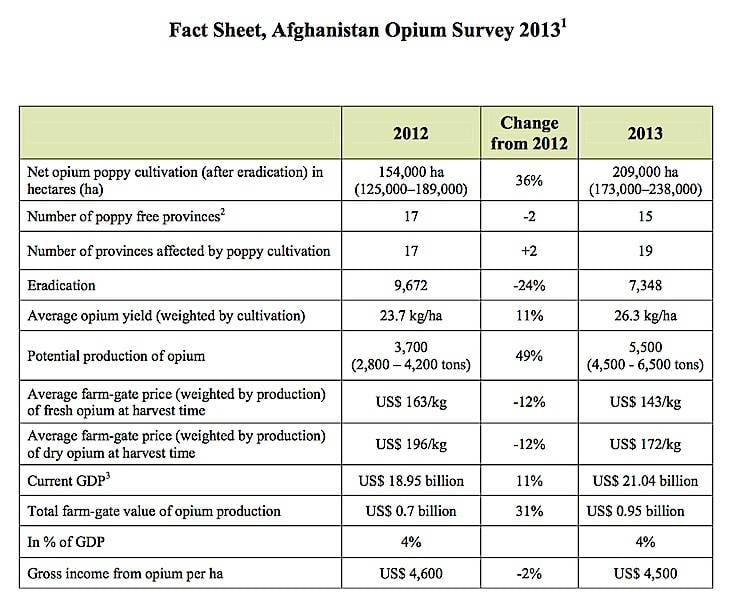 Formally, the cultivation of opium poppy - the main component in the production of heroin - is prohibited by law in Afghanistan, but the number of provinces where it is grown is growing steadily. Opium production reached the 5.500 tonnes mark, showing an 49-percent increase over the 2012 year. Western propaganda in every way accuses the drug industry of the Taliban or representatives of the regime who are mired in drug trafficking, but these allegations are not consistent with reality.

The NATO command states that the Taliban, "who spoke at first against drugs, now either grow drugs themselves or tax the crops that farmers collect." However, the Taliban command has repeatedly pointed out that the Afghan Mujahideen conduct jihad against the occupiers, and Islam strictly prohibits both drugs and alcohol. And it must be said, the fanatical followers of Islamism follow these instructions rigorously.

As for Western puppets like Karzai and his entourage, there seems to be plenty of grounds for accusations. In October, a scandal erupted in 2013 in Kabul, when, during an inspection in Afghanistan, 65 high-ranking intelligence officers were discovered who turned out to be ... heroin addicts! A few years earlier, it turned out that the CIA is financing Ahmed Wali Karzai, Hamid Karzai's younger brother, who has been the leading opium dealer in the region for more than 8 years.

Researchers from the United States claim that from the American side, the opium trade is controlled by the networks and cartels that have been illuminated in the Iran-Contra case and have not ceased their activities with 1980's: “The pillars of the Karzai regime rely on drug support, and for us they are untouchable. We have turned Afghanistan into the largest supplier of heroin, and this happened under the control of the CIA, ”these researchers note.

According to major media reports (The Daily Mail, The New York Times, Pakistan Daily, and others), the largest suppliers of heroin to world markets are also: the governor of the Afghan province of Farah and the head of the Afghan anti-corruption administration, whose responsibilities include preventing the cultivation of opium, Izzatulla Vasifi, a childhood friend of Hamid Karzai, arrested by the US authorities for trafficking in high-quality heroin in July 1987, (!), Head of the National Youth Solidarity Party of Afghanistan and a member of the National Security Council In Afghanistan, Jamil Karzai is Hamid Karzai’s nephew, who does business with Haji Mohammad Osman, who has a drug lab in Achinsky district of Nangarhar province (Damgal district), a member of the Afghan Unocal Company Abdul Qaum Karzai, brother of Hamid Karzai I, and an associate from the Afghan parliament, former Unocal of the Unagan province of Afghanistan Shawali Karzai is the brother of Hamid Karzai, who has sown fields in the provinces of Kandahar, Nangarhar, Uruzgan, Zabol, Paktiya, Paktika and Helmand, as well as many dozens of executive and legislative representatives. Astey and officials of the Ministry of the Interior of Afghanistan.

According to Western mass media, Western puppets of the Karzai family and their hangers-ons are to blame for the rapid growth of heroin addiction on the planet. However, in the Karzai government-controlled northern and central areas of Afghanistan, only 20% of the opium poppy is grown. The rest of the income potion grows in the southern provinces of the country on the border with Pakistan, in the zone controlled by NATO troops. The main center of drug production is Helmand Province, which is under the tutelage of the British.

Instead of helping Afghan farmers switch to alternative cultures, Western “peacekeepers” are only limited to speculations about why drug production is increasing and, as local and international sources show, they are actively involved in this business. Some commentators explain this by saying that the United States avoids a potential conflict with drug lords, whose political support is important for the existence of the Karzai government. However, the US ignores the close connection between the drug business, the growing instability in Afghanistan and the growing terrorist activities in the region. Simply put, even if you believe that the United States thus gives free rein to drug lords in exchange for political support from the Karzai government, they are essentially undermining those goals under the pretext of which invaded Afghanistan - peace and security in this country.

Western experts, such as Thomas Ruttig, director of the Afghan Analysts Network, an independent research center, point out that “due to the upcoming withdrawal of the NATO contingent from Afghanistan, the pressure on poppy producers by the authorities has noticeably decreased. The UN report says, among other things, that in 2013, authorities destroyed crops by 24% less than before. ” Consequence: Afghanistan is established in the position of the world's largest opium producer, which in 2013 was over 90% of world production. Three years ago, the UN noted that poppy was grown in only 14 regions of the country from 34, then at the beginning of 2014, their number is already 20. Large opiate plantations have reappeared even in the provinces of northern Afghanistan, such as Balkh and Faryab, previously loudly declared "lost status" of opiate producers. These Afghan provinces coexist with two CIS countries - Uzbekistan and Turkmenistan.

At the same time, the process of rapid militarization of international drug groups concentrated in this region is underway. Viktor Ivanov, head of the Russian Federal Drug Control Service (FSKN), says: "We see that armed groups are a segment that grows out of drug cartels located in the north of Afghanistan. These groups have their own military units ... In Afghanistan, drug groups are rapidly militarizing. They are all are already well armed: have a rifle weapon, firearms, grenades, grenade launchers and apply them regularly. The budget of such drug groups is about 18 billion dollars. It is so much income gives them a drug. Therefore, such groups have become a serious factor in the formation of the political, economic and criminal situation in the vast states of Central Asia. "

For years, Americans have been using a cold war against the post-Soviet republics to destroy their human potential against post-Soviet republics. On the eve of the withdrawal of the occupying parts of NATO from Afghanistan, they are using all means to encourage drug production and contribute to the transition of this war into the “hot” phase with the help of the drug mafia gangs armed with Islamist slogans that they are arming and concentrating…