Union border. For Kyrgyz-Tajik "clashes in the enclave" - ​​the price of heroin in Moscow 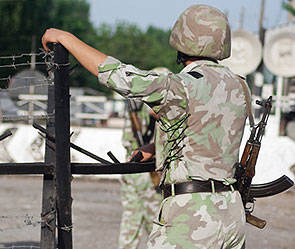 The new political year traditionally began with an armed aggravation in Central Asia. If last year attention was riveted to the Uzbek enclave, then this year to the Tajik.

The fact that the clashes occurred around the enclaves is the main detail of this political event in Eurasia. After all, in fact, this is not a conflict between Kyrgyzstan and Tajikistan. Political geography does not give an understanding of the essence of the conflict, but on the contrary, it aggravates it. Especially for a citizen who is not familiar with the realities of Central Asia, at least at the level of reading local media.

Some kind of Kyrgyzstan with some Tajikistan. Again, something is not shared. Before the eyes of a simple, and especially, a simple Moscow inhabitant will sail a Tajik, who plastered the walls in a philistine apartment. And the Kirghiz, which works as an illegal courier at a philistine firm. For some reason, the plasterer and the driver took Kalashnikov assault rifles and started shooting at each other. In general, some kind of feverish delusion or scenario for a third-rate Hollywood blockbuster about “Kirzakstan.”

Therefore, here is the second major detail: all these conflicts occur in the Fergana Valley. So, it makes no sense to consider Uzbekistan, Tajikistan and Kyrgyzstan separately, simply meaningless. The only format in which peaceful life is possible in cities, villages, makhallas and enclaves of the Fergana Valley is the lack of internal borders and the external security of the valley itself.

The problems of the Fergana Valley are similar to those of the Transcaucasus: as long as Georgia, Armenia and Azerbaijan are not part of a single military alliance, the region has a high explosion danger. By and large, the events in the Fergana Valley at any time can begin to develop according to the scenario of August 2008 in South Ossetia. In both regions, a comparable number of the population lives, which is very dispersed.

As long as the Fergana Valley is not located within a single economic region with secure borders, there will be no peace in this region. Because when a large economic region is torn between different republican jurisdictions, the region switches to the smuggling form of the economy. And legal economic activity in the framework of the three-part Fergana Valley is impossible in principle: all republics have their own low-income and unclaimed currencies, non-integrated economies, different access to resources, mutual claims to each other, etc.

The maximum task facing Russia and the Union is the security of the Fergana Valley as a whole. And not because someone strongly loves Uzbeks or Tajiks. The chaos in this region facilitates drug traffic to the North (in the direction of Kazakhstan, the Urals and Siberia). One follows from the other. Without security and a coherent economic policy, legal activity becomes unsafe and unprofitable, and illegal, on the contrary, becomes super-profitable. The impoverishment of the bulk of the population in the republics leads to political tensions and conflicts. Which, in turn, only increase the traffic of weapons, drugs and smuggling. That is, the shooting between the Tajik and Kyrgyz border guards in fact determines how much a syringe with heroin will cost in Astana, Yekaterinburg or Novosibirsk. And the more often they shoot, the lower the price.

However, at the moment, Uzbekistan has withdrawn from the CSTO and is in no way going to participate in Eurasian integration. Since Tashkent controls most of the Fergana Valley, it is impossible to guarantee the security of the entire economic region. Consequently, on the agenda is the issue of physical security of at least three economic regions - Kazakhstan, Western Siberia and the Southern Urals.

At the same time, we must remember that the Kyrgyz themselves and the Tajiks themselves are not particularly inclined to negotiate. Because both sides are guided by national logic: it is more important for them to show their militancy and readiness to defend national interests, rather than to ensure the security of the region. It is also important that both national capitals — that Bishkek, and Dushanbe — are outside the Fergana Valley. This means that a firing on the border for a Bishkek or Dushanbe politician is more likely a reason for good PR than a structural issue of regional security in Eurasia.

Therefore, whether we like it or not, the issue of security in the Fergana Valley is the problem of Russia and the Union. Especially Russia, which has military bases in Kyrgyzstan and Tajikistan. By maintaining and strengthening the military bases in Kant, Dushanbe, Kulyab and Kurgan-Tube, we actually gave security guarantees to this section of Eurasia. And Russia, as often happens in stories, took security guarantees for both Kazakhstan and Belarus. After all, Astana and Minsk do not send their soldiers and officers to the Tajik-Afghan section of the allied border.

If the Union really has a security task in "our" part of the Fergana Valley, then it can be solved only by allied methods.

It seems that we have come to the historical moment when the Union needs advanced army units to solve special peacekeeping tasks. In fact, we need to form a Eurasian peacekeeping contingent on a professional basis. Who is to solve the tactical tasks of the Allied security in different parts of Eurasia.

Creating such a peacekeeping contingent will be an excellent integration project for the armed forces of Russia, Belarus and Kazakhstan. Because only in union activity the union result is possible.

After all, the agenda is not Tajik-plasterer and Kyrgyz-driver, shooting at each other somewhere far in the enclaves of the Fergana Valley. On the agenda are terrorist bombers in Volgograd, as well as the price and availability of a dose of heroin in Moscow, Astana and Minsk.

Ctrl Enter
Noticed oshЫbku Highlight text and press. Ctrl + Enter
We are
The border of Kyrgyzstan and Uzbekistan: the disputed land and the prospects for appeasementAbout Stalin and Khrushchev
Military Reviewin Yandex News
Military Reviewin Google News
39 comments
Information
Dear reader, to leave comments on the publication, you must sign in.