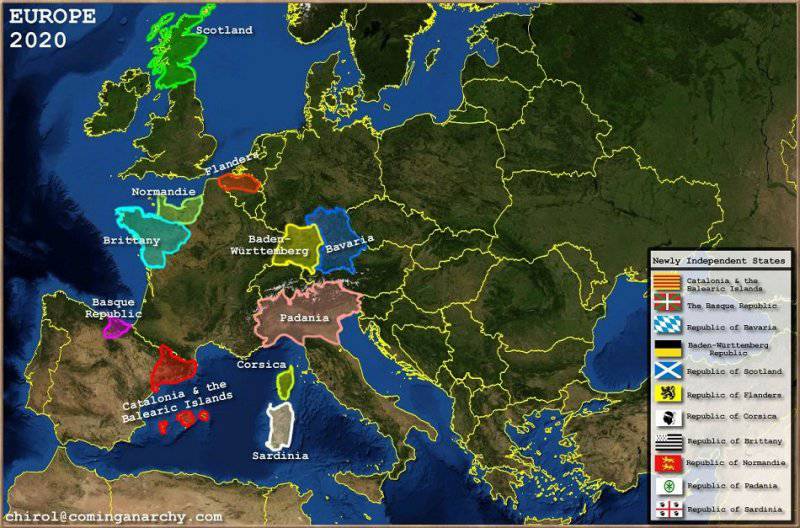 The one and a half million demonstrations in Barcelona in support of Catalan independence and the Catalan parliament, which came under the control of two separatist parties, became the most visible signs of a new flourishing of separatism in Europe. Earlier, in October 2012, British Prime Minister Cameron and Scottish First Minister Salmond signed an agreement to hold a referendum on the independence of this part of the United Kingdom in 2014. At the same time in the local elections in Belgium, Flemish separatists from the "New Flemish Alliance" won. Nationalists also came to power in the Basque Country in Spain ...


The examples cited are just the “surface part” of Europe’s huge separatist iceberg, which includes more 40 political parties and social movements that are part of the European Free Alliance. This non-governmental organization is a kind of European internationalist regionalists, autonomists and moderate separatists. In the same Spain, in addition to the rebellious Catalans and the Basques, the separatists operate in Andalusia, Asturias, Valencia and Galicia.

In Italy, the incessant desire of the rich north to form their own state called Padania regularly holds the central authorities in suspense. Another part of Italy’s north, South Tyrol, dominated by the German population, was also intensified. Separatists in this region are demanding a referendum for joining a more prosperous Austria.

In France, supporters of independence are multiplying in Corsica, in Provence, Savoy and Brittany. In Corsica, for example, the activities of militants from the underground organization Corsican National Independence in 1990-s cost the lives of more than three thousand people. In Provence, warfare did not come to an end, but the idea of ​​an independent Occitania is present in the minds. Occitan separatism is especially noticeable in Nice. This city was annexed to France under the 1860 treaty of the year with the Sardinian kingdom. In the same year, Savoy was annexed to France. Celebrating the 100 anniversary of this event as well as in Nice, led to a surge in separatism. A small circle "Club Savoyard Savoy" grew up in the "Savoy League".

The Bretons are of the opinion that they are more French than the French themselves; at the same time they have their own language, extending into the depths of the Celtic stories. The Bretons have a bad attitude towards immigrants from Asia and Africa who have filled the country - the percentage of Arabs and blacks in the region is insignificant. From among them came the head of the National Front, Marine Le Pen, who, incidentally, defends the territorial integrity of France.

In Poland, separatists were discovered in Upper Silesia, which formerly belonged to Germany. The movement for autonomy of Upper Silesia was created as early as 1990, and would have been considered a gathering of marginalized people, if during the 2002 population census it was not revealed that thousands of people in the country chose to call themselves 173 not as Poles, but as Silesians. Experts say that in the whole of Poland the Silesians number at least a million people.

Catalonia: to be a referendum!

Today in Europe, those provinces that donate towards their neighbors and the center revolt first of all. These include Catalonia in Spain. The main discontent of the Catalans is in the wrong, in their opinion, the distribution of finances. They believe that the central government in Madrid, taking tax revenues from Catalonia, does not return them to the regional treasury in the proper amount. In Catalonia, they claim that every year the local government pays the center an ounce of more than a billion euros for the 16 than it spends on its own. The Catalans are tired of sponsoring the rest of the country, while the state of the local infrastructure leaves much to be desired. And despite the fact that in terms of GDP per capita (more than 30 thousand euros!), Catalonia is on a par with Great Britain and Austria.

Economic difficulties are imposed on centuries of historical and language disputes between the Catalans and the rest of Spain. Residents of the region, in particular, speak their own specific language, which belongs to the Gallo-Romance group of languages ​​and is very close to the Occitan language in French Provence. The language of the Catalans for many generations was oppressed by the Spanish authorities, and during the dictatorship Franco was completely banned.

November 25 The 2012 year in Catalonia held extraordinary regional elections, in which parties that are in favor of separating Catalonia from Spain won almost two-thirds of the seats in the local parliament. Long before they were held, the head of the Catalan government, Arthur Mas, promised that if he won them, he would hold a referendum on independence.

So it happened. A vote on the independence of Catalonia is scheduled for November 9 of 2014. The government of the Spanish province adopted such a decision, despite the direct prohibition of Madrid. The Declaration of Sovereignty of the Parliament of Catalonia adopted at the beginning of 2012. However, the Spanish Constitutional Court immediately declared the document illegal. And the current step of the Catalan Cabinet in the Spanish capital was commented on in the same vein: there will be no referendum.

To which of the "rebellious" provinces answered: there may go for a unilateral declaration of independence. Confirming these words on January 16, the confident majority of the Catalan Parliament (87 vs 43 with 3 abstentions) confirmed the government’s decision and voted in favor of a referendum on independence.

Flemish against the Walloons

The economic crisis revealed a chronic ulcer of separatism in Belgium, which consists of two parts, in which two non-close people live. The southern part is Wallonia, where French-speaking Walloons reside. North - Flanders, or the Flemish region of Belgium, whose population speaks Dutch.

Up until the end of the Second World War, the power in the country belonged to the Walloons. Thanks to coal mines and heavy industry, Wallonia was superior to Flanders in economic development. The language of the Flemish, constituting more than half of the country's population, was not even official. But after the end of the war, Flanders, on the basis of new high-tech industries, managed to reach a leading position in the economy. Flemish became the second state language - along with French. Wallonia is in crisis. The steel and coal industry, as the "postindustrial economy" grew, gradually died.

Against the backdrop of the critical state of European finance, the more economically developed Flanders is becoming increasingly dissatisfied with the current mechanism of tax deductions to the country's budget. On average, the northern part of Belgium each year transfers to the state treasury an 16 billion euro more than the southern one. The integrity of the country is also threatened because more than half of the 11 million people in Belgium live in Flanders.

At the local elections held in Belgium in October 2012, the Flemish nationalists won the elections for the full independence of Flanders. Their leader, Bart de Vever, who became the mayor of Antwerp after the victory of his party, constantly notes the perverse, in his view, system of redistributing finances in favor of Wallonia. “The Flemish are tired of being mistaken for cows that are needed only because of the milk they give,” says de Wever.

The Flemish nationalists now make it clear that if Scotland gets a pass to the European Union and NATO, they will be next in line. They will probably make the final decision based on the results of the next parliamentary elections, which will be held on 25 on May 2014, simultaneously with the elections to the European Parliament.

In the event of the disappearance of Belgium from the map of Europe, the consequences will be unpredictable - and this is for the entire continent. If Flanders wants to unite with Holland, we will talk about the complete redivision of borders. In addition, the Walloons and Flemings will engage in a tough battle for the right to control the capital Brussels, where the most important institutions of the European Union are located, including the headquarters of the EU and the European Parliament.

Scots believe in the North Sea

There is no doubt that 15 October 2012 of the year was one of the most important dates in the modern history of Great Britain. On this day, United Kingdom Prime Minister David Cameron and First Minister of Scotland Alex Salmond signed an agreement to hold a referendum on the independence of Scotland in 2014. The referendum will be held 18 September. “Do I believe that we will achieve independence? Yes I believe you. I think we will get it ... ”- said Alex Salmond after signing the fateful agreement.

In independent Scotland, it is proposed to leave the British pound sterling as the currency, and the head of the country - the Queen of Great Britain. At the same time, Scotland will also have its own armed forces. From the territory of Scotland is supposed to take out the British nuclear weapon.

In an attempt to convince the Scots to vote in a referendum for independence, the nationalists place the main emphasis on the fact that, after leaving the UK, Scotland will be able to independently dispose of the natural resources that it has to share with the center today. We are talking about oil and gas reserves, which are produced on the Scottish shelf in the North Sea.

Alex Salmond says: “Look at the other side of the North Sea. And you will see a country in which oil and gas occupy a much larger share in the economy than in Scotland. Despite the volatility of this type of economy, Norway is the only country in Europe that does not have a budget deficit. She has a future generation fund in excess of 300 billion pounds. ”

If the population votes for independence, it will be declared 24 March 2016. Until that time, Edinburgh and London will have to agree on the conditions for the division of Great Britain, formed in its current form after the signing of the Union Act between England and Scotland in 1707.

Independence for Scotland is fraught for Britain with its relegation to the role of a secondary state, which 6 directly warned the former NATO Secretary General George Robertson, by the way, a Scot by nationality, on January 12 in The Washington Post. Robertson is particularly worried about the fact that "the British nuclear base is located in Scotland, and now supporters of the exit insist on its transfer outside the country."

In any case, the process of balkanization of Europe and its fragmentation into smaller states will probably begin in the coming months.