January 23 2014
11
The Tejas Mark 1 will be one of the most affordable fighters in the world in its class. MoD representatives reported that Hindustan Aeronautics Ltd (HAL) installed the first Tejas 20 fighter jets, which began to produce in Bangalore, the price of about $ 26,3 million per plane, according to local press.


This is only part of the cost of the comparable Mirage-2000, which was bought relatively inexpensively in the 1980s, but now its modernization costs $ 45 million per fighter. On December 19, 2011, Defense Secretary Anthony announced in Parliament what Thales would have received for modernization fleet of 49 Indian Mirage-2000 fighters, 1.4 billion euros, while HAL would receive $ 328 million, which would total $ 1.72 billion. Since modernization will be completed only by 2021, its value will increase even if it falls rupee.

Anthony then told the parliamentarians that the fleet of 69 fighters MiG-29 was upgraded for 964 million, which is approximately 14 million per fighter in excess of the acquisition cost.

The Pakistani JF-17 Thunder lightweight fighter aircraft, jointly developed with China, is supposedly a bit cheaper - 23-24 million dollars per aircraft. However, Tejas significantly surpasses JF-17 in the use of composite materials, an electrical control system and more perfect avionics.

MO is trading with HAL over the price of 26 million, indicating that in 2006, HAL denoted the price of 18,9 million. HAL, in turn, indicates that about 45% of foreign-made Tejas components, and Inflation over the past 8 years has provided a rise in fighter cost by 40%.

During a recent visit by Business Standard journalists to the Tejas production lines, HAL representatives spoke about the measures they were taking to reduce the cost of Tejas in order to make it more attractive to the country's Air Force. The first step for HAL was to achieve economies of scale by organizing assembly and production lines on 200 fighters - despite the fact that MoD has only confirmed the purchase of 40 Tejas. 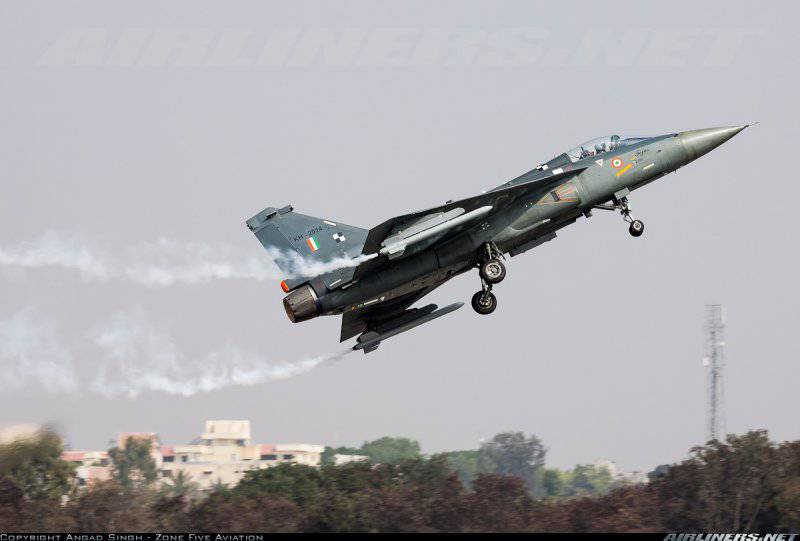 However, in its ambitious plans, HAL enjoys the support of the MoD. In December, 2013 at the ceremony of adopting Tejas into service with the Indian Air Force, the Minister of Defense announced that it was planned to manufacture approximately 200 fighters in Mark I and Mark II configurations.
According to the plans of HAL, the Tejas Mark I fighters must enter the 20 in the current configuration and 20 after the full operational readiness, scheduled for the end of 2014, is reached. These are the two squadrons that the Defense Ministry has already confirmed. Next, HAL plans to produce the Tejas Mark II 84 fighter (4 Squadron). The Navy has already ordered a deck-mounted 8 Tejas, and soon plans to purchase the 11 Tejas Training-Combat Deck. After the development is completed, the Ministry of Defense will order another 46 Deck Tejas for two own aircraft carriers - INS Vikrant and its successor.

HAL also develops a cost reduction system in the full production and sales cycle, signing long-term (3-5 years) agreements with subcontractors. Instead of placing disparate orders, HAL orders for materials and components for the production of 40-50 aircraft kits. Strengthening their confidence and ensuring reasonable prices, HAL annually negotiates with them to link the pace of supply with the operation of the Tejas production line. With the growth of orders from the Navy and Air Force, as HAL assures its contractors, work with them will continue, and prices will remain at an acceptable level.

Problems with the equipment of a long production cycle, and sometimes, having a high percentage of defects, have already been identified and resolved. Tejas production line will have a high-quality machine shop with the most modern five-axis CNC machines. For critical components, such as composite wing skin, these machines are designed to replace the manual drilling of 8000 holes - a computer program will work instead, which will reduce cycle time, reduce errors and reduce production costs.

“With the help of such measures, we will improve the build quality, avoid alterations, defects and delays. Reducing the man-hour rate for mass production compared to prototyping will automatically reduce the cost of Tejas production, ”says RK Tyagi, chairman of the board of HAL.