The religious aspect of the Arab Troubles is the Shiite war against the Sunnis. The beginning of the creation of the Shiite Caliphate 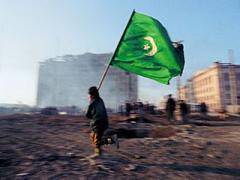 Analysts are focusing on oil unrest in the Arab Troubles, the role of the United States, social and economic problems, but few noted that this Troubles also has a clear religious dimension.

This is a Shiite uprising against the Sunni authorities. In a number of countries, Shiite Arabs make up the majority of the population (for example, in Bahrain) and have no rights, they are the oppressed majority. All the main profits from oil and gas revenues accumulate with the Sunni authorities. A real religious war has begun, and this is for a long time.

This is a small monarchical state with a base of American fleet (5th Fleet) would attract the attention of the whole world, if not for two other global events - the war in Libya and the disaster in Japan. In Bahrain, the majority of the population is Shiites, and the clan of rulers is Sunnis. The Sunni monarchy has a powerful patron - the Saudi monarchy (and the States behind them), the Shiite majority is morally supported by Shiite Iran. The confrontation became so strong that the Saudis and a number of other Sunni monarchies of the Arabian Peninsula sent troops to save the power of the Sunni clan.

In addition, the elite of Iran consider Bahrain the 14 province of the country, which was illegally alienated from Persia in the 1783 year.

Iran’s military and religious elite quickly hit a wave of “p-revolutionism” in their own country and is well aware that serious points can be gained during unrest in other countries. Iran can get out of this Troubles leader of the Islamic world, crushing the Shiite movements in Arab countries. Yes, the possibility of territorial expansion is.

The issue of creating a Shiite caliphate is on the agenda. In addition, Tehran has a secret mighty ally - the Rothschilds Ashkinazi, who started the war with the Sephardic USA and Europe (in Europe the Sephardic are represented by the authorities of France, Spain and Italy).

Tehran can get huge benefits from the unrest and revolutions in Bahrain, Yemen, Syria and other Arab states, in fact there is a sweep, Iran will remain the only real force in the Islamic world (unless Ankara can challenge it, but their interests largely converge - for example, in suppressing the Kurdish movement).

Islamization of the region

The fall of secular regimes in Tunisia, Egypt, the war in Lebanon, the almost accomplished revolution in Yemen, unrest in Syria, Sudan - all this taken together leads to the radicalization of Islamic movements and parties, increasing the influence of radical Islamists. And, as a result, to undermine the position of the United States in the region, and, accordingly, strengthen the position of China (where the Rothschilds "sat down"). Thus, according to public opinion polls conducted by Pew in June 2010, the ideas of the Islamists shared 59% of Egyptians, and more than 95% of all respondents supported the increasing influence of Islamic ideas on the political process in the country. More than half of all respondents openly stated that they support Hamas, 30% support Hezbollah, and 20% support al-Qaeda.

This all undermines the position of the United States and Israel, for good reason Tel Aviv has requested additional 20 billion dollars from Washington for defense. The leader of the Muslim Brotherhood Party (Egypt), Rashad al-Bayyumi, said that if his party came to power, the peace treaty between Israel and Egypt could be canceled.

Besides Islamists put forward very popular slogans in society - the fight against corruption, poverty, the establishment of social justice.

There is threat and for saudi arabia - In recent years, opposition forces have become more active in this country. The kingdom can be split into the eastern (Shiite) part, the north-western part, which is historically to Jordan, and the southern regions, which have long-standing ties with Yemen. An external threat also contributes to this, a revolution has begun in Yemen that can “blow up” the entire peninsula. Iran is sponsoring the local Hezbollah and the more moderate "Shiite reform movement."

In addition to these factors, we can expect the strengthening of the positions of the neovahhabites, which are mainly represented by teachers, students of theological faculties of universities and marginal elements. They take a sharply anti-Shiite position and at the same time hate the royal family and the business elite, considering them traitors of Islam for working with the West and a luxurious lifestyle far from the ideals of asceticism (which, in principle, is true).

It may well collapse and OmanThe first wave of protests has already affected this monarchy. The situation is aggravated by the absence of the heir to the Sultan Qaboos, who has occupied his post since 1970.

Practically all the countries of Central Asia can become a candidate for the revolution: in social terms, the proportion of young people who grew up in conditions of independence and does not have the stability of the “scoop” (it can easily be made a shock unit of the “p-revolution”) has increased. In political terms, the closeness of elites, a high level of corruption, the Islamic factor, the authoritarian regimes. In the economy - poverty, unemployment. In the national - the oppression of Russians, ethnic strife (the Uzbeks-Kyrgyz, etc.).

The situation could be aggravated by the likely drought of 2011 in Central Asia, there was little snow in the mountains of Tajikistan, which is the main source of water for river flow and forms 60% of Central Asian water reserves. Lack of water will lead to crop failure and food shortages, increasing food prices, which automatically cause the anger of the population.

The first candidates for the revolution and possible civil war are Uzbekistan, Kyrgyzstan and Tajikistan. The situation in these countries is very acute, exacerbated by the growth of Islamism, ethnic discord, the presence of mass weapons in the population.

Egypt and Tunisia are already out of balance, in Libya there is a real war - at the same time civil and external aggression. Algeria, Morocco is quite easy to “throw” into the fire, since all the conditions have been created - a civil war is smoldering in Algeria.

Sudan is on the verge of a new civil war, the only question is, when it starts, a peaceful separation between North and South is almost impossible.

To summarize: all the conditions for the creation of the Shiite Caliphate, authoritarian military Sunni regimes or already crushed (as in Egypt), or under attack (Libya). Sunni monarchies have almost completely lost their authority in connection with their disintegration, ties with the West, support for aggression against Libya. The “field” for Iran has been cleansed; it remains the only authority for the Islamic world.

How to behave in Russia in this situation.

Do not get involved! This is not our war. And to strengthen its influence on Europe, including by means of an even greater binding of their energy to us, including through the North and South streams. Do not by their actions turn the Islamic world into an enemy.