January 23 2014
69
In 2007, Russia and India signed an agreement to jointly develop the fifth generation FGFA (Fifth-Generation Fighting Aircraft) fighter. It is assumed that the air force of India will become the launch customer of this aircraft, and in the future it will be delivered to third countries. Until recently news About the FGFA project they dealt with various organizational issues. In addition, information appeared on possible orders from third countries. 22 January became aware that the project is promising fighter has been criticized by the Indian military. 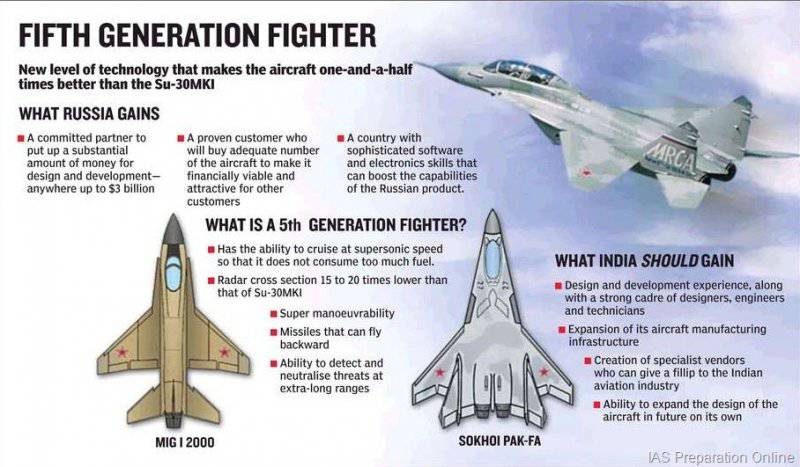 The Indian edition of the Business Standard in Russia doesn’t publish on Fifth Generation Fighter Aircraft: IAF ("Indian Air Force: Russia Can't Create Fifth Fighter FGFA") covers the current situation around a promising project. As it turned out, the joint project has ceased to organize the Indian military. Some features of this project have been the subject of criticism.

December 24 in New Delhi, a meeting devoted to the prospects of Indian aviation industry. According to Business Standard, during this event, representatives of the Indian Air Force sharply criticized the FGFA project. Claims to it come down to three main points: firstly, the Russian side is reluctant to share important information; secondly, the proposed AL-41F1 engines are not reliable enough, and are also only a modernization of the AL-31F engines; thirdly, the FGFA fighter is too expensive. In the case of financing the development and construction of such aircraft, the Indian military will be forced to reduce other purchases. Recall, India plans to invest about 6 billion US dollars in the FGFA program.

January 15 in the Ministry of Defense of India held a regular event on the project FGFA. According to the publication Business Standard, representatives of the Air Force command, responsible for the procurement of new equipment, during this event negatively responded about the project. The unreliable engine, the new radar station and the "raw" elements of stealth were subjected to criticism. In addition, the commanders of the Air Force are not satisfied with the small share of India in the works, as well as the excessive cost of mass-produced aircraft.

As can be seen from the available reports, the Indian Air Force is against the continuation of a joint project with Russia. In favor of this opinion, arguments are made concerning both the cost of the project and the possibilities of a promising aircraft. Nevertheless, joint design work can be considered a resolved issue. Moreover, from some statements by the leadership of the Indian Ministry of Defense, it can be understood that the Air Force will receive FGFA aircraft in the future.

Previously, the Lockheed Martin F-35 Lightning II was considered a promising fifth-generation fighter for the Indian Air Force, but was quickly abandoned. Minister of Defense of India AK Anthony several times bluntly said that the air force does not need this machine, and they can be updated only at the expense of FGFA aircraft. The joint project will bring dividends not only to the armed forces, but also to the industry, primarily the HAL aircraft manufacturing corporation. The development and construction of a new fighter by the two countries will enable India to gain important experience, which is planned to be used in the future when creating the AMCA (Advanced Medium Combat Aircraft) aircraft. Thus, participation in the FGFA project will allow Indian designers to create their own fifth-generation fighter.

The position of the Indian Ministry of Defense and the aircraft industry is simple and clear: a joint project should be continued with the aim of updating the fleet of equipment and mastering new technologies. In the light of the position of the military department and aircraft manufacturers, the opinion of the command of the air force looks at least strange. The publication of the Business Standard, citing sources in the Indian Ministry of Defense, provides a possible reason for such disagreements. Not so long ago, India chose the winner in the MMRCA tender, whose goal is to purchase 126 new fighter jets. The best car in the competition was recognized as the French fighter Dassault Rafale. The total cost of 126 aircraft of this model is approximately 18 billion dollars. Probably, a gradual reduction in military spending could lead to the current situation, when the leadership of the Indian Air Force simply has to choose between purchasing existing aircraft and developing promising aircraft.

Russian and Indian aircraft manufacturers have repeatedly disclosed some details of the appearance of an FGFA aircraft. Some of their statements can be considered in some way a response to criticism from the Indian Air Force. For example, the AL-41FXNNXX engine currently used is a temporary solution. For the Russian fighter T-1 and its export version of FGFA, another engine is being developed. In addition, as part of the FGFA project, it is planned to create a new radar with a circular view. As for the relatively high cost of the finished aircraft, this is due to its class (heavy fighter) and the corresponding requirements.

The program to create a fifth-generation fighter FGFA is moving forward, and the latest statements by the leadership of the Indian Air Force can be linked to its current stage. Recall that in the fall of 2007, Russia and India signed an intergovernmental agreement, and in December of the following year, Rosoboronexport and HAL signed a general contract, which described the general principles of international cooperation. At the end of 2010, the parties signed a preliminary design agreement. By this time, the basic requirements for a promising aircraft were determined. In the middle of last year, preliminary design was completed, and negotiations are ongoing for a contract, the purpose of which will be the creation of a final project. Perhaps, the leaders of the Indian Air Force are trying to influence the decisions of the Ministry of Defense before signing the last contract, which will be followed by major financial investments.

India is currently planning to build an FGFA 144 fighter. Previously, the number of required aircraft of this type was estimated at over 210 units, but the financial restrictions of recent years have forced the Indian military to abandon these plans. The renewal of the Air Force - the purchase of French Dassault Rafale aircraft and the creation and subsequent construction of FGFA fighter jets - will have to spend approximately 25 billions of dollars. In the light of the possible continuation of a reduction in the military budget, such plans look extremely daring, and no one can yet guarantee that they will not have to be revised. This year is expected to sign a contract for basic engineering works. By the time this agreement appears, the parties must determine their plans and needs. In addition, by this time, the confrontation between the air force and the Ministry of Defense can be completed in alliance with aircraft manufacturers.