So alive or dead to Doku Umarov?

January 23 2014
31
On Wednesday, a new correspondence charge was brought against Doku Umarov, the leader of the terrorist underground gang. Reports about it Interfax with reference to some own sources. At the same time, the material of the information agency states that this time Umarov was charged under Article 205.2 Part 1 of the Criminal Code of the Russian Federation:


Public calls for terrorist activities or public justification of terrorism.

Such an accusation, as reported by the same unnamed source of information of Interfax, appeared after the publication of a certain video message by Umarov on the Internet, in which he reflects in the veto of justifying terrorism. The video materials themselves, according to some data, are now thoroughly studied by Russian law enforcement agencies and special services, but there is no word about where exactly such materials have surfaced.

The penalty for the above paragraph of Article 205.2 is as follows:

a fine of up to five hundred thousand rubles, either in the amount of the salary or other income of the convicted person for a period of up to three years, or by forced labor for up to four years, or imprisonment for a term of two to five years.

The situation with such an odious figure as Doku Umarov has recently been developing, generally speaking, very strange. A few days ago, the head of Chechnya, Ramzan Kadyrov, said that he was 99% sure of the death of the leader of the North Caucasian gangster underground, because in his (Kadyrov) order there is a record of the conversation between two “emirs” from Dagestan and Kabardino-Balkaria, in which they express condolences each other and choose a new "Emir" of Chechnya. If we take into account that Umarov was considered the “emir” of Chechnya, then it turns out (according to the conversation already mentioned by Kadyrov) that he (Umarov) is truly dead. According to Kadyrov, it remains only to find the corpse ...

The strangeness of the situation is that the Russian special services do not confirm Umarov’s death. If you add here information about a certain video message by Umarov (when and where he made it - so far a big question), for which the gangster was added another “correspondence” article, then it turns out that Russian law enforcement and special agencies do not just confirm the information The Chechen Republic, but in fact refute it. “Why would a new article be added if the person involved is dead ...”

What kind of information to trust today? The one according to which, Umarov is more alive than dead, or the one who says that he is more dead than alive? 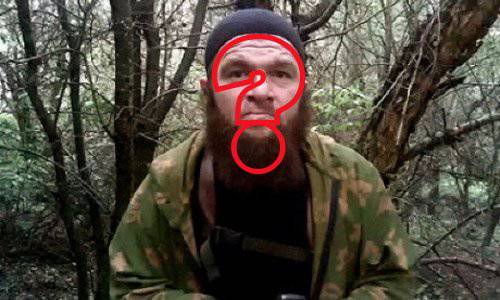 To force yourself to dwell on any of the presented points of view, it is necessary to compare the facts available today.

If we start with the facts that speak in favor of the version of his death, then these facts are almost entirely based on reports submitted by Ramzan Kadyrov. The messages, as we have already understood, are based on the presence of a certain audio record of the Chechen leader, the existence of which, however, is not reported by the special services. Of course, we can say that the secret services are not obliged to report anything in terms of the availability of important operational information, but after talking about a certain published address on the Internet that Umarov had, and on the basis of which, Umarov was put forward regarding the Emir The new correspondence charge, information methods of the Russian special services still raise some questions. They call, of course, if the Interfax messages are really based on real and “fresh” materials, and not on speculation, intertwined with an informational video clip.

So, the version about the death of the leader of the Caucasian gang underground promoted by Kadyrov is based on a certain audio recording, the essence of which is known from the words of the same Kadyrov. Are there any other evidences that Umarov "is more dead than alive"? There is no evidence, there is only indirect evidence of his possible death. This is the lack of publications in the form of video messages on various video hosting sites, or, let's say, specific resources, which Umarov personally captured (or, as is often said, “a person like” Doku Umarov). The last of these “official” video addresses dates back to July last year, when Umarov lifted the so-called “moratorium on terrorist attacks against the Russian people” and announced the preparation of terrorist attacks aimed at holding the Olympics. After the appearance of "on the air," Umarov did not show himself in the video, did not "speak" on the radio.

Someone may assume that he showed himself, but only the moderators of video hosting sites were immediately guided and immediately removed the appeals of the terrorist. Yes, just think so - very naive. Why naive? Yes, because all the other Umarov "appeals", for example, did not go away from Youtube anywhere - they only transformed into original comments of world news agencies. As an example, a video was posted on Youtube on behalf of a very popular foreign information resource, which presents the full version of the above-mentioned July appeal from Umarov with some comments from the host broadcast. That is, if Umarov from July 2013 of the year to January of 2014 presented something on his own in video format, then the world press would have long ago “extracted” this material from video services, presented with its own explanations what “he had in mind "under its own sauce, again laid out in Youtube. But the world press is silent, only arguing that someone spoke "on behalf and on behalf of" Doku Umarov "the other day."

Now that "Umarov is more alive than dead." What confirms this version? Indirectly, Russian special services, who see no reason to confirm Kadyrov’s words. In reality, this is the absence of a gangster's corpse. But with the corpse, the situation is also far from being the most transparent. With a strong desire, both the special services and Kadyrov could “find” the body of an insurgent, and even demonstrate it, let's say, to the general public. But, apparently, no one is going to say “gop!” Until the situation with Umarov's death becomes obvious.

Can we assume that Umarov is alive, based on the recent tragic events in Volgograd? Volgograd terrorist attacks are by no means an indicator of the existence of Doku Umarov in this world, if not an indicator of this and the words of some militants who joined the Iraqi extremist organization that declared Umarov's "health".

Reports of Umarov's death have appeared before. In the press you can count about half a dozen such "news of death." The militant "perished" in Beslan, Grozny, Urus-Martan, Nozhay-Yurt. The last time they “buried” Umarov in 2011 was when, after an airstrike on the location of the militants on the territory of Ingushetia, the insurgents allegedly left only fragments of his body and clothes. Then they even conducted a DNA examination, but the examination showed that the remains did not belong to Umarov. What kind of DNA materials were taken as the basis is not specified.

By and large, whether Umarov is alive or dead is no longer important. The current situation is such that if someone is carrying out plans to disrupt the Sochi Olympics or to explode in other Russian regions in order to disunite the people, to push individual groups of their heads together, he will do everything to use the services of other “Umarovs” (“Basayev”, “Barovy”, further, as they say, according to the list). Umarov, even if one assumes that until recently, such a “image” was not, let's say, collective, a typical cog in a big machine of global terror.
Dropped one - replaced by another. But who periodically tightens up such screws, changes them and lubricates the whole mechanism - this is a separate question. The answer to it, and not at all the new “correspondence” articles of the Criminal Code in relation to the cogs, should concern Russian law enforcement and security officials if their work is really entirely aimed at ensuring the security of Russia.

Ctrl Enter
Noticed oshЫbku Highlight text and press. Ctrl + Enter
We are
Results of the week. “In our cooperative, the board is always agreed”Chechnya is "separated" before the Sochi Olympics
Military Reviewin Yandex News
Military Reviewin Google News
31 comment
Information
Dear reader, to leave comments on the publication, you must sign in.