Al-Qaida as a trademark 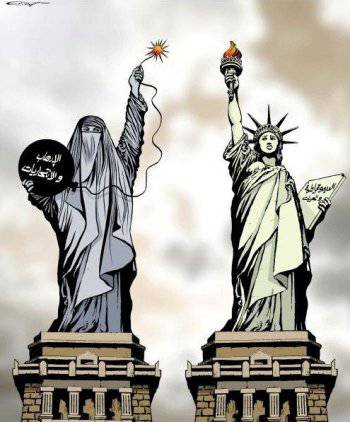 The other day in the transfer "P.S" with A. Pushkov was told about “Al-Qaeda” - in the sense that the Americans cannot defeat it in any way. They struggle with it, they fight, that Osama was killed, and Al-Qaida is not only thriving, but it is creating more and more new cells and branches, and there’s no end to it. Al-Qaeda is everywhere - in Africa, in the Middle East, and in Pakistan and Afghanistan. It operates in dozens of countries (in 34-x, according to some). But what to say, the militants are about to unfold in the US! The NSA, let us add to this, probably, therefore, it bugs the entire globe: after all, the chances that every second person is a member of a terrorist network are very high.


Black-flag terrorists from al-Qaida are regular guests of the American media. The program said that it seems that the militants are planning to seize the White House in the near future. Well, why not, if there are so many of them?

Why is al-Qaeda expanding endlessly, although brave and intelligent warriors from Western intelligence agencies are constantly fighting with it?

In the program of comrade Pushkov, the view was expressed that Al-Qaida was a political myth, to someone very profitable. On the question of "who" can not answer. The Asia Times writes that a person sitting in front of a computer angry with America can easily declare himself over the Internet as an al-Qaida cell in a certain country. How to check?

It is not excluded that Western intelligence services are turning up all sorts of "staged" terrorist acts, which are then used to put pressure on parliaments and increase their budgets.

And what kind of "staging"? Yes, everything is simple: on the Internet or TV show bearded guys with weapons against the background of the black flag, which declare themselves to be a new cell of al Qaeda and threaten new acts of terrorism to America or its protesters. There is another option: they show something on TV that has been destroyed by an explosion, and this is supposed to confirm that al-Qaeda has made a new attack. And then the CIA officials cheerfully report that they intercepted a telephone conversation of certain "villains" from Al-Qaida. They can also show a missile strike from a drone (a picture from the monitor) as an episode of the fight against terrorists - but it’s hard to understand whom the missile killed there.

It turns out that Washington is deciding where al-Qaeda is and where it is not. It also determines when it strikes.

Al Qaeda is essentially a satellite of American foreign policy. As noted in the program, it’s scary to think what would have happened to this policy if al Qaeda had disappeared! Intelligence officers, military, computer scientists could lose their jobs. An unenviable fate would have waited for all sorts of "experts." Most importantly, such a convenient reason for manipulating the consciousness of society in different parts of the world would disappear. Therefore, the elimination of bin Laden (although, most likely, it was not him) did not affect the organization itself, nor the struggle with it. This sounds ridiculous, but Obama’s great victory in eliminating the “terrorist number one” from the point of view of combating terrorism has produced absolutely no results, according to the PostScript. On the contrary, we are told every day about threats from al-Qaida ...

And one cannot say that Comrade Pushkov is mistaken or has suddenly become a supporter of fashionable conspiracy theory. The events of the last days just confirm the opinions voiced in the telecast.

22 January RIA News" reported that the United States, Qatar and Saudi Arabia are supporting the Syrian opposition rebels, who are fighting Islamist groups. This was told the British newspaper «Daily Telegraph».

All this is done, of course, "in secret." The press learns about it first-hand, apparently, because the very budgets of the very special services mentioned in the PostScript are at the proper level even in times of crisis. Generals should not starve, and staffs should not be reduced: after all, there are terrorists. So in Syria. Who said that the US is at war with Assad, and not against terrorists? .. No, no, the main enemy of the United States is al-Qaeda, this is what Obama said before the elections, deftly parrying Mitt Romney’s slogans about Russia.

The Saudis and Qataris, it must be assumed, were taken to the company because they are US satellites in the region, and the world community does not have a right to think about them. There are no Wahhabis in Riyadh; Riyadh, as you see, is also fighting Al-Qaida and all its affiliates.

“While Western leaders are publicly pushing the Syrian regime and the opposition to participate in the Geneva-2 peace settlement conference ..., Washington also secretly supports Saudi Arabia and Qatar’s efforts to provide money and weapons to the anti-Al Qaeda "group" Islamic State of Iraq and the Levant "(ISIS) in Syria."

In Syria, we recall, the war has been going on for almost three years. It is interesting that, exactly according to Pushkov, Al-Qaeda expanded to an incredible size there. In the Western media they write that more than half of those who fight against the “Assad regime,” or even 60 percent, are al-Qaida’s branches and cells, that is, those or other “bearded” who have already sworn al-Zawahiri swear, and then personally sent them into battle.

However, az-Zavahiri himself is rather categorical with respect to some fighters - and thus makes it clear that his network Islamist army is not at all as large as American security forces say.

The other day on "Tape.ru", citing France-Presse, it has been reported that the victims of a two-week confrontation between radical Islamists and the so-called moderate rebels in Syria have become more than a thousand people.

The jihadists from the Islamic State of Iraq and the Levant lost 312 people killed, and their opponents from among the other militants lost 608 people.

At the same time, not only moderate Islamists, but also al-Qaida, came out against ISIS. Ayman az-Zawahiri announced that ISIS should disband its formations, because the only "legitimate" representative of Al-Qaida in Syria is the "Front of al-Nusra".

That's the case! Zavahiri something - against LIH! And Washington, using the hands of Riyadh, is fighting against ISIS, because this organization, they say, is part of Al Qaeda!

As for the war against Al-Qaeda of such “democratic” strongholds of the Middle East as Qatar or Saudi Arabia, then the Americans have completely forgotten about logic.

Recently, the Permanent Representative of Syria to the UN, Bashar Jaafari, in a letter to the Security Council and Ban Ki-moon accused the Saudi Arabian authorities of having links to al-Qaida and supporting terrorists, and even demanded that Riyadh be brought to justice. Reported it correspondent ITAR-TASS Oleg Zelenin.

A diplomat’s letter appeared on the UN’s website in which he recalled that in October, Ayman al-Zawahiri declared a “war against the infidels” in the Middle East. Jaafari cites the names of 72 theologians and theologians of Saudi Arabia, who, after az-Zawahiri, addressed the Muslims of the whole world, urging them to “continue to support the Mujahideen in Syria”, in particular, the Islamic Front grouping (it interacts with “Dzhebhat an- Nusra ").

“This is proof that these theologians and rulers of Saudi Arabia who stand behind them are associated with Al-Qaeda and its leader Ayman al-Zawahiri,” wrote the permanent representative of Syria. He called the kingdom the “source of global jihad” throughout the world.

According to Comrade Jaafari, "the Saudi regime is in flagrant violation of international law, the International Convention for the Suppression of the Financing of Terrorism and Security Council resolutions relating to countering terrorism."

Also, the Permanent Representative of the SAR pointed out to the UN Security Council the need to “take serious measures” in relation to Saudi Arabia. “Lack of reaction would be tantamount to undermining international efforts to combat terrorism, which poses a threat not only to Syria and its neighbors, but to the whole world,” he wrote.

So the Americans took serious measures. Now the press is drawing a new image of Riyadh - as the central fighter against al-Qaeda terrorism. It remains only to believe it ...

It turns out that Al-Qaeda is a trademark of the “security” service industry, promoted by experienced marketers and screenwriters from the NSA and other special services. These types of even exposing Snowden on hand: the whole world now realized that the "Big Brother" is watching seriously. There are some scales! .. And if I had not watched, the whole world would have exploded a long time ago. Therefore, about half or slightly less than Americans and approves the activities of the NSA - despite the scandals with wiretapping. Isn’t the NSA comrade Snowden, who turned out to be so easily in Moscow, a shame? .. There’s no better world PR of the “anti-alkaid” campaign. Now, no one will say that aenbashniki toil of idleness and all day porn from sites download.

Observed and commented on Oleg Chuvakin
- especially for topwar.ru
Ctrl Enter
Noticed oshЫbku Highlight text and press. Ctrl + Enter
We are
Results of the week. "Go on a horse, a century of will not be seen!"Results of the week. “I am a prince! What I want - and I turn back ... uh ... I act in the interests of the state "
Military Reviewin Yandex News
Military Reviewin Google News
13 comments
Information
Dear reader, to leave comments on the publication, you must sign in.