January 23 2014
50
Last Tuesday, the first meeting of the Defense Ministry Board was held this year, which, according to Minister Sergei Shoigu, was devoted to discussing President Vladimir Putin’s message to the Federal Assembly (applicable, of course, to the defense segment). The results were summed up and further directions for the development of the country's security system, the development of the defense industry, and the army as a whole were determined. 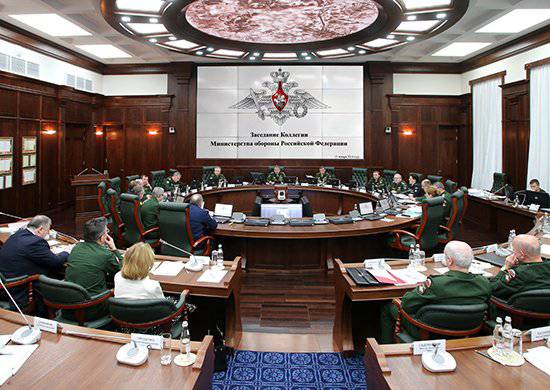 In fact, many topics for discussion can hardly be called new. For example, we again spoke about the need for planned manning of the Russian army by contract servicemen and the need for timely implementation of the state defense order aimed at large-scale modernization of the army and fleet. It seems that without such a repeated repetition of the text of the task posed today, the very fact of its solution is not obvious ... But still, it’s better to repeat once again and ultimately achieve goals than with a quiet glander (as it was not so long ago) just to release all the directives on the brakes.

In his speech, the Minister of Defense touched on the pace and volume of the implementation of the GOZ last year. At the same time, Sergei Shoigu himself presented the figures obtained as a result of summing up the implementation of GOZ-2013. It turned out that purchases of weapons and military equipment stopped at 93%, part of the R & D performed at 96%, repair and maintenance of military equipment was completed at 91%. At the same time, the total volume of concluded contracts, according to the data presented at the Board, was 99,9% (from the speech of Shoigu himself).

The head of the military department of the Russian Federation noted that there were those areas where all contracts, without exception, were fulfilled and deliveries of military equipment to the troops passed without disruption. We are talking about the supply of strategic missiles, air defense systems and UAVs (unmanned aerial vehicles). The Minister of Defense particularly singled out the first conclusion of life cycle contracts - contracts for the creation and the full cycle of the subsequent maintenance of this or that equipment, up to its final disposal. The total amount of contracts of the type mentioned is 120 billion rubles.

During the speech, the Minister spoke about the implementation of plans for the provision of housing for servicemen, for the repair and rehabilitation work related to equipment. One of the parts that caused the greatest subsequent discussions is the part devoted to the subject of new threats to the security of Russia. Shoigu made a special emphasis on the presentation of such threats. According to him, new threats for Russia are, quote:

the deployment of a global missile defense system and the deployment of its components near the Russian borders, the creation of new effective means of high-precision weapons in the usual equipment, the militarization of outer space.

At the same time, the Minister of Defense immediately noted that Russia was forced to take retaliatory measures, carrying out tasks to further strengthen the nuclear triad, to form a global intelligence system (including using a space grouping), to develop aviation, Navy and Ground Forces.

So, if we return to the threats that Sergei Shoigu outlined in his speech, then you can see that the Russian minister placed first priority on the deployment of the American missile defense system. Did it happen by chance? With high probability, we can say that it is not at all accidental.

Whatever the state of the Russian economy, there is at least one factor that is a deterrent to our “partners”. And this factor is the presence of nuclear weapons in Russia. If for a moment it is assumed that the Russian nuclear triad suddenly ceases to exist or external or internal conditions are created under which the effectiveness of this triad is equal to zero, then the hands of the “partners” are actually untied by themselves. What can Russia then expect? Frankly, there are not so many scenarios: Libyan, as one of the concrete examples. After the execution of this scenario - the transition to the process of real fragmentation, which is well seen today in the same Libyan example.

Once, our country has already experienced when the internal political "elites" played out a scenario written outside the state, according to which all the country's military might was simply out of business. This, of course, is about the process of the collapse of the USSR. Yes - the Country of Soviets had a powerful army, the country possessed effective weapons (including nuclear), the Soviet fleet was present in the world ocean, the Soviet aviation conquered the vastness of the air oceans, but all this was actually blocked by internal disassemblies - the bone that external forces were thrown to the above-mentioned "elites", choosing the main conductor of the ideas of schism. And the split, as we all know, took place.

It says that countering the deployment of the US missile defense system should be conducted not only without any regard for the reaction of the “partners” (after the US declared that the missile defense program continued to be implemented even after the change of Iran’s political leadership, Russia would - reaction to the response - should be just uninteresting), but with the full understanding that such resistance should really work. To work is already not so much in the military as in the political context. In other words, if countermeasures, positioned as an answer to the deployment of the same missile defense system in Europe, are taken, then we need a guarantee that these measures will not again be “stopped” during political fights inside the country. As an example: in the USA the President Democrat replaced the president of the Republican, but this almost did not affect the continuation of setting up radars and antimissiles in the agreed parts of world territory (and the water area with the help of special warships). That is, the security system of the United States is, as it were, supra-political and will be developed in spite of everything - not on the party’s functions of the president, nor on his skin color, nor on the cut of a suit.

This is exactly the American experience that Russia should adopt. Although there will be those citizens who declare that we should have our own way here too. If it exists, then what is it in - can it really depend on the effectiveness of the national defense and security system on the moods of one or another representative of the highest state power? If so, then this path very much resembles the classic Russian roulette, which had already borne its horrific fruit once in 1991 year.

In general, the threats are named, ways to neutralize them are determined, it remains to ensure that the course towards safety (not only on the basis of nuclear weapons, of course) is a priority under any conditions (under any government, under any president). Otherwise, the scenario that our country has already experienced will repeat, and after the implementation of which, it still cannot come to its senses.

Ctrl Enter
Noticed oshЫbku Highlight text and press. Ctrl + Enter
We are
Results of the week. "Who you are lucky, in fact, and will carry a cock, and such a bird as you, I, too, will rush!"Results of the extended meeting of the Defense Ministry board: to grind so to grind ...
Military Reviewin Yandex News
Military Reviewin Google News
50 comments
Information
Dear reader, to leave comments on the publication, you must sign in.