To the capture of the Russian trawler in Senegal: an episode of the geopolitical struggle for Africa 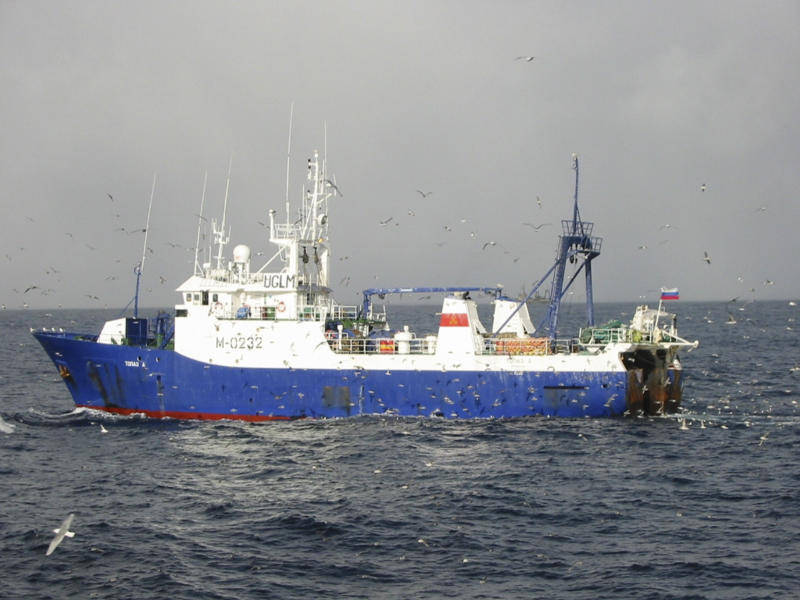 The misadventures of the crew of the Russian fishing vessel "Oleg Naydyonov", arrested on January 4 by Senegalese special forces off the coast of West Africa, seem to end not today or tomorrow. Finally, the Senegalese parliament finally got involved in resolving the issue - after the attempts of the Russian side to establish a direct dialogue with the President of the Peanut Republic (as the African country was long called) Maki Sallom ended without result. At the same time, everything still depends on how independent the Senegalese are in this matter.


The deputies of the parliament formed a special working group to solve the “problem of Naidyonov”. In their investigation, they placed particular emphasis on the international composition of the crew of the detained vessel, consisting of 62 citizens of Russia, 23 citizens of Guinea-Bissau and one citizen of Belarus. The parliamentarians stated that the conflict has a negative effect on relations with Russia and Guinea-Bissau, and invited the Minister of Fisheries and Maritime Industry Haidar al-Ali, one of the main initiators of this stories. Similarly, they cannot summon the head of state to the carpet, since Senegal, according to the constitution, is a presidential republic. Salla was simply asked to "assist" in resolving the crisis.

The new head of the Federal Agency for Fishery Ilya Shestakov ruled out the possibility of any backstage solution. As he told reporters, "the release of the Russian trawler" Oleg Naidenov "and his crew in Senegal should take place exclusively in the legal arena." At the moment, we are talking about, in particular, about making a pledge by the Murmansk shipowner Phoenix for Oleg Naydenov in the amount of 1 million dollars.

"Holy of the Pope"

According to Senegalese laws, the Minister of Fisheries and Fisheries has the right to order the seizure of vessels in the national water area, although the leaders of the Russian Fishery Agency firmly believe that Oleg Naydenov was detained in the exclusive economic zone of Guinea-Bissau. At one of the numerous video briefings, the captain of the Naidyonov, Vadim Mantorov, said that he had been visited by two Senegalese navigators who had offered to sign a paper stating that the Russian ship had only gone one mile into the Senegalese waters. The captain naturally refused.

“They are gangsters, we will continue to fight them,” said Haidar al-Ali immediately after the arrest of Naidyonov. However, he did not explain why the captain of the trawler Valery Mantorov and other crew members were beaten up during the arrest. True, the minister then somewhat reduced the intensity of his rhetoric, saying that the Russians "violated the safety of the fishing industry," and "the Senegalese fishermen must feed their families."

By origin 50-year-old El-Ali comes from Lebanon, and this explains a lot. The Lebanese community in Senegal is one of the most well-to-do; its representatives hold retail trade in their hands. 1993 is remembered by everyone for a year when, after the devaluation of the African franc that caused the collapse of the Senegalese financial system, crowds of the black poor of Dakar went to smash jewelry shops and boutiques owned by Lebanese merchants.

In a word, if you are Arab and want to make a political career in Senegal - be “holier than the Pope” in upholding the country's national interests. The piquancy of the situation is also in the fact that El-Ali moved to the post of minister from the post of head of the local "green" and the actual coordinator of the regional section of Greenpeace. The latter allowed Rosrybolovstvo to link the attack on the Naydyonov with last year’s arrest of the ecological vessel Arctic Sunrise at the Prirazlomnaya oil platform in our northern waters. The motive of the “answer to Moscow” was clear enough.

“Our report, in which“ Oleg Naidyonov ”is accused of illegal fishing off the coast of West Africa, is dated 2012. To put it mildly, it is strange to associate it with current events, ”said Khalimat Tekeyeva, Greenpeace-Russia press secretary, the other day.

In fact, nothing strange about it. The Russian fisheries department is well aware of the fact that as early as February 2012 of the year, Greenpeace introduced the trawler to its “black list”, declaring it the object of a protest action for illegal fishing in Senegalese waters. And the Arctic Sunrise was Naidyonov's main pursuer. The Greenpeace agents then inscribed the board of the Russian trawler with inscriptions in French and in English “Robbers”, “Robbery!”, Accompanying them with a pattern with a fish skeleton.

At that time, an election campaign was going on in Senegal, one of the central points of which the current president Maki Sall made "a fight against pirate ships that rob our fish resources." And no later than December 26 last year, the Greenpeace called on the Senegal government to intensify the fight against "sea poachers from Russia and Europe." Around the same days, El Ali reported that the French military aviation "Monitors Russian violators." But the Rosrybolovstvo did not react to this, since the crew of Oleg Naydenov worked quite officially.

Later, Greenpeace officially acknowledged that the Russian X-trailer of December 23 "was spotted by a French military plane." He admits with a reservation that the Greenpeace members themselves do not have any information on this issue, except for media reports.

Dictatorship of the "third force"

Haidar el-Ali has had many meetings in recent days with both Senegalese and foreign journalists. Speaking about the "poachers from the former USSR", he quite frankly let it slip about where he got this information from: "According to the United States Agency for International Development (USAID), Senegal annually loses 210 million dollars because of ships that conduct illegal fishing." It turns out that Africans are not able to calculate their own losses?

However, the minister has something obviously wrong with arithmetic. He said that the Russians would be fined 350 thousand euros (about 470 thousand dollars), then increased the penalties to 800 thousand, and recently sounded the equivalent of three million dollars. In addition, the Senegalese fishery announced claims to confiscate all the equipment and cargo of Oleg Naidenov.

What is interesting: the Senegalese press quite restrainedly covers this story, concentrating on the statements of officials and without going into details. But in informal conversations, local journalists, on condition of anonymity, confirm the version of the influence of the “third force”: either the French, or the Americans, and, most likely, both.

“Americans traditionally act with us together with the French, it would be too difficult and costly to play independent games for them,” a Senegalese correspondent told Quotidien. - And the ecology has always been a convenient tool to cut off unwanted competitors. Previously, China was accused of violating environmental standards, and now Russia, which went for “poaching”.

“In Senegal’s policy, with all the external continuity, a lot has changed after the defeat of the socialists in the elections in the 2000 year,” says Senegalese historian Barry Boubacar. “But the foundations of relations with your country were laid under the socialist presidents Leopold Senghor and Abdu Diouf, despite the fact that we were divided by the Cold War.”

Senegal, we recall, since independence in 1960, has remained in the orbit of French influence. Unlike Guinea-Bissau, which, freed from Portuguese rule only in 1974, immediately headed for rapprochement with the USSR and was soon recognized by the Central Committee of the CPSU as one of the countries of "socialist orientation." There was a political and ideological confrontation between the neighboring African states, the consequences of which, as we see, are still manifest. With all the difference in potentials, little Bissau survived, since at the local level it was supported by another neighbor, Guinea-Conakry, which in those difficult times became a strategic partner of the USSR and PRC at the same time.

And the fact that in the current situation Guineans were on the side of the Russians is not accidental. After the capture of “Oleg Naidyonov,” they detained several Senegalese fishing boats, which they would hardly have decided to do without Russia's firm position.

In Senegal itself, the first “post-socialist” President Abdullai Wade, who was still the traditional political elite (he came to power at the age of 84 years), continued to strengthen relations with Russia in various fields - from energy to the same fisheries and agriculture. In 2005, the Minister of Foreign Affairs of Senegal, Sheikh Tejan Gadio, told the author of this article that in Russia the representatives of his country "are primarily interested in oil production, new technologies, Russian know-how, including in agriculture." He also spoke of the desire to “invite Russian farmers to help reform the Senegalese cattle-breeding sector.” In the latter case, it was a very serious project on dairy production, because having a large population of cattle, Senegalese are forced to import milk from Europe.

But already at that time, in Senegal itself, and among its Western partners, there were influential forces that slowed down the implementation of joint projects with our country. With the coming to power of the “environmentally-friendly” Maki Salla, all of this seemed completely forgotten.

A blessing in disguise?

However, the current conflict around the Russian trawler seems to have pushed former supporters of cooperation with Moscow to be more active. While “Rosrybolovstvo” found out the fate of our compatriots, the veterinary services of Senegal unexpectedly turned to the Russian authorities, who, together with their Ugandan colleagues, were asked to contribute to the access of fish processing enterprises of their countries to the Customs Union market (Russia, Kazakhstan, Belarus). In the case of landlocked Uganda, we are talking about lake fishing. “We will conduct an inspection, because we need fish products. Normal business relations will contribute to the improvement of the situation in the areas of catch, ”Alexey Alekseenko, assistant to the head of the Rosselkhoznadzor, told reporters.

According to him, the establishment of the supply of African fish products will help to get away from the monopoly dependence on other countries, "because we are very burned with Norway." Alekseenko explained that our northern neighbor, significantly increasing the volume of deliveries to Russia, still does not allow itself the inspection of the Rosselkhoznadzor to inspect objects of interest. And this is despite the fact that Russia is leading among the importers of Norwegian fish.

Ctrl Enter
Noticed oshЫbku Highlight text and press. Ctrl + Enter
We are
Armed Oceania: are there Pacific Islands armies?Is the capture of the Oleg Naydenov trawler part of an environmental terror campaign against Russia?
Military Reviewin Yandex News
Military Reviewin Google News
60 comments
Information
Dear reader, to leave comments on the publication, you must sign in.