March 25 2011
15
After 1945 there was not a single decade in which a harmonious choir of army voices did not predict an imminent death tank technology as a class of combat vehicles. Their first gravedigger was called nuclear weapon. However, it soon became clear that in terms of its use, a tank, on the contrary, shows the highest survivability and combat capability compared to all other equipment, after which all skeptics died down, but not for long. Once again, the rolling "shovel" was handed to anti-tank guided missiles, combat helicopters and now all high-precision weapons in general. But, in spite of all this, the tanks did not manage to bury.

To date, the main battle tanks (MBT) continue to be the main striking force of the ground forces of any state. And even noticeably reducing tank parks, no one is going to abandon them. Analyzing the experience of recent military conflicts and the current level of equipment of armies in different countries, as well as the level that they can achieve in the foreseeable future, we can confidently say that at least for the next 3-4 decades, the MBT will remain the main striking force in ground units all armies. Being the most survivable, protected and heavily armed combat vehicles in combat conditions, they will, as before, largely determine the stability of ground forces units.

With a great deal of confidence we can say that for the next 25-30 years, a significant part of the world tank fleet will continue to be machines familiar to us today. Such main tanks as T-64, T-72, T-80, T-90, M-1 "Abrams", "Challenger-2", "Leopard-2", "Merkava" and other design ideas 60- 70-s of the last century, which were first improved in 80-s, and then in 90-s significantly upgraded, and still continue to improve mainly due to the installation of a new "filling and underweight." 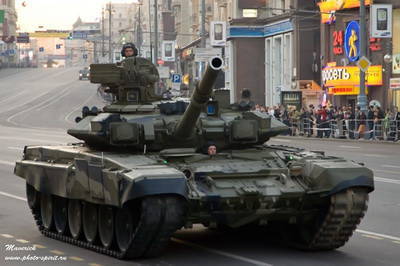 T-90 at the parade in Moscow

Obviously, over time, new models of tank technology, created, including on existing platforms, will appear on the battlefield, but there will not be so many of them. Among them, domestic-made tanks may find their place, but what kind of cars these will be is a separate question.

At the beginning of the 2000-ies in the press appeared the first mention of the developed domestic tank of a new generation. Ural KB machine was known under the symbol "object 195", but received its fame as the T-95. Information about the new tank was then quite stingy, and many thought that it would all end only with drawings. However, in the 2008-2009 years, information leaked to the media that a prototype was built and even participates in tests. This tank combines a lot of developments on all the machines of this class, which were conducted in the last century, when the МХNUMX Abrams and T-1 were considered the pinnacle of technical thought. Read more about the features and layout of the "72 object" you canin our article.

Is there anything cheaper?

Even despite its outstanding performance characteristics, the T-95 tank is unlikely to go into mass production. The high cost of the tank, together with the folding of similar foreign programs, makes the re-equipment of domestic tank units on the T-95 a little meaningful and, most importantly, a devastating project. Along with this, a new universal army platform is needed. Such a platform on tracks could be used for tanks and for BMP "heavy brigades." The development of such a platform was begun in the USSR, but in the 90s of the last century it stopped due to lack of funding. Currently, after abandoning the T-95 as the main tank, a unified platform is created based on the requirements of feasibility at the existing technical level and industrial potential. Accordingly, the requirements for its combat capabilities were changed.

Viktor Murakhovsky, an expert in the field of armored vehicles, believes that the main requirements for it are to increase the security of the crew of the vehicle, as well as to equip with means and equipment that will allow the tank to interact with all the other forces of the brigade under the control of the ESU TZ class systems. When creating a new technology, the requirements for "dueling capabilities" that determine the ability to resist the enemy's MBT will be somewhat reduced. Tools of greater power, such as the conceived 152 mm gun on the “195 object”, will not be used. The replacement will be advanced 125-mm guns. This weapon still has a high development potential, including in terms of creating new generation ammunition, while improving this artillery system requires far less cost than moving tanks to a new caliber of main armament. 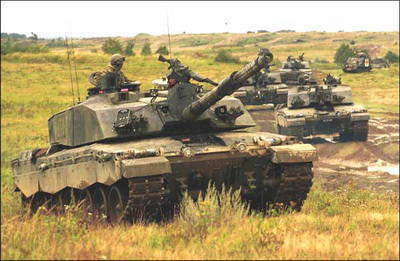 Increased requirements for the protection of the crew in conjunction with the development of a new platform, common to both the tank and the heavy infantry fighting vehicle, imply placing the crew of the vehicle in a separate armored capsule, as well as on the T-95, as well as a modular layout. Depending on the purpose of the vehicle, it will receive either a combat compartment of a tank with the appropriate weaponry, or a combat and amphibious compartment for infantry fighting vehicles.

And what is abroad?

In most developed countries of the world today they prefer the modernization of existing combat vehicles. They took this path in the United States after the economic crisis forced the richest country to abandon its ambitious Future Combat System (FCS) program, within which various military equipment had to be developed, including MBT. Moreover, none of the projects of the FCS tank showed a radical combat superiority over the modernized versions of the M1 Abrams, which did not justify its high price. Using the platform from the tank M1, you can carry out upgrades, which will actually allow you to create a new combat vehicle. It is on this way tank went in the West.

In 2009, the United States announced that in the next decade the main battle tank in the country would remain M1A3. It is expected that the new modernization of the tank will get less weight - about 55 tons, against today's 62. This reduction can be achieved through the use of a new turret, which will receive an automatic charging device, modeled on the French tank Leclerc. It is supposed to put a new diesel engine on the machine, update the fire control system and it is possible to install a new weapon (according to some caliber in 140 mm.). These vehicles are planned to be created on the basis of the M1 and M1А1 tanks in storage, they may well remain in service with the country until the 40s along with the existing М1А2 tanks.

In Germany, the development of the Neue Gepanzerte Platforme (NGP) program also slows down (if it does not stop completely), where, like on T-95, it was planned to place the main armament in an uninhabited tower. The tank was to receive the 140-mm cannon as the main weapon. At present, it is not clear whether the German Defense Ministry will be able to find money for a new car, most likely for the 10-15 years, the Leopard-2 will remain the main tank of Germany. Last year, at the Eurosatory exhibition, German tank builders demonstrated a new modification of the tank Leopard-2A7, along with it at the exhibition showed the futuristic MBT Revolution, which was also created on the radically modernized platform Leopard-2. It differs from the A7 model with even greater attention to the security of the tank, as well as the use of “digital armor” technology, which should provide the crew with almost all-round visibility from inside the vehicle. 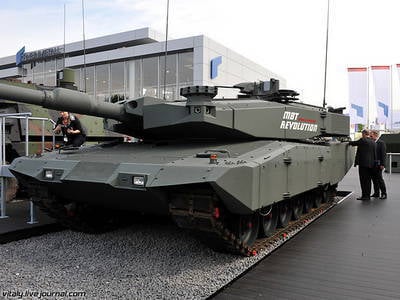 Currently, France has one of the most advanced MBTs, the development of the Leclerc tank was carried out in the 80-90 of the last century. In the coming decades, France will manage upgrades to this machine. It is planned to install on the tank the latest fire control systems and a new, more powerful weapon. Perhaps work will be done to improve the power plant, to which there are now a number of issues. The remaining components and assemblies will be borrowed from the base tanks.

His thoughts on the development of a promising tank is in England. They quite fit into the mainstream of the general trends in the development of armored vehicles - a reduction in crew size, a more powerful gun, a perfect fire control system, etc. True, there is information that the successor of the Challenger-2, developed under the Mobile Direct Fire Equipment Requirement program (requirements for firing direct fire in motion), is planned to be equipped with a new gun with electromagnetic acceleration of the projectile. There is a possibility that in this area the British will become innovators, having managed to be the first to install such a weapon on a serial tank. However, the time to implement this system postpones the development of the tank at least 20 years.

Today, the following main trends in the development of main battle tanks can be distinguished:

1. The mass of tanks stopped growing. All promising projects, with the exception of the upgraded Merkava tanks (created for special theaters of military operations), have a total mass within 60 tons.
2. The growth of tank firepower slowed down. Russia's transition to 152 mm guns would invariably launch a new round of the race for the most powerful tank gun, but this most likely will not happen. The limit for the next 20 years will be the caliber of the 140 mm, and the bulk of the tanks will continue to be equipped with 120-125-mm guns.
3. Without exception, all promising tanks will receive an automatic charging, which testifies in favor of the path of development, which in Russia was chosen 30 years ago.
4. New, more advanced fire control systems, target designation systems and communications, as well as active defense complexes and other equipment, with which the combat capabilities of the existing 2-3 generation technology will be significantly increased.
Ctrl Enter
Noticed oshЫbku Highlight text and press. Ctrl + Enter
Military Reviewin Yandex News
Military Reviewin Yandex Zen
15 comments
Ad