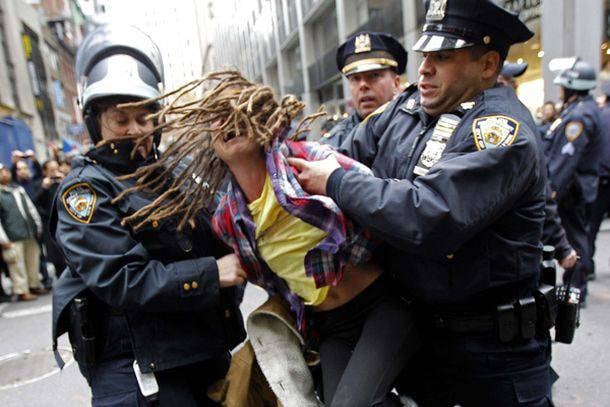 The police in the United States is a “state within a state.” American cops get away with almost everything: drug trafficking, rape, and even murder. NYPD is out of competition. It does not take a month for the local law enforcement officers not to plunge into any scandal.


The other day, for example, in the city of "Big Apple" on suspicion of fraud with insurance and social benefits were charged 72 retired police. They are charged with the simulation of mental disorders, which, allegedly, were the result of rescue operations during the collapse of the twin towers 9 / 11. The damage from such criminal activity, according to the investigation, is equal to 400 million dollars. However, it is too early to talk about the victory of law and justice. 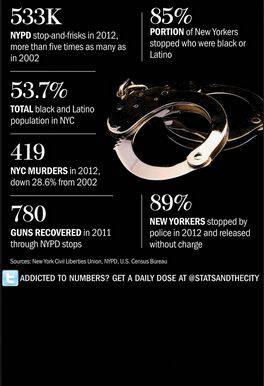 New York cops regularly fall into the ugly stories, but most of them almost always manage to avoid retribution. Over the past eleven years, they were covered by a more than reliable "roof" - Mayor Michael Bloomberg (his term expired on December 31 2013 of the year) was obsessed with turning New York into the safest US metropolis. To this end, the police were given unlimited powers, including permission to use weapon in places of mass gathering of people, as well as using the “stop-interrogation-search” tactics, which allows you to detain any “suspicious” person without any reason whatsoever.

The New York City Police Department was also implicated in several major corruption scandals on the Bloomberg board. The loudest publicity received the so-called Ticket-Fixing case. The fact is that in the US, motorists caught for violating traffic rules receive a penalty ticket, and depending on the severity of the deed, they may lose their right to control for a long time. Those who disagree go to court, which almost always supports the prosecution - then you have to pay not only a fine, sometimes reaching several thousand dollars, but also legal costs. However, if the policeman who issued the fine ignores the trial, the case is automatically resolved in favor of the “offender”. Thus, the essence of the scam was that for bribes and offerings on the appointed day, the cops simply did not come to court.

According to the city police chief, 300 of all the fraudulent episodes was investigated, while the city’s financial losses amounted to about 2 million dollars. Hundreds of policemen were involved in the violations, but the prosecutor's office decided to confine itself to the main corrupt officials. "Alas, the punishment of a dozen policemen is nothing compared to the number of those who could be prosecuted by the prosecutor's office," the law enforcement source quoted the New York Daily News newspaper.

The apotheosis of the scandal was the long prison terms of 43-year-old Jose Ramos and his wife. As it turned out, the officer not only participated in the fraud with car fines, but also actively engaged in drug trafficking and looting. Moreover, already in the remand prison, he tried to organize the murder of a witness, for which he asked his wife, who was still free, to find the killer ...

In August 2011, about thirty more policemen were under investigation for perjury in a number of criminal cases. As it turned out, they invented the circumstances in which the arrests were made, as well as fabricated evidence. “Some policemen lied about the fact that the suspect got rid of drugs at the time of his arrest. This was done to register the arrest and put a tick in the plan, ”say sources in law enforcement agencies.

“Such stories have one thing in common. At first, the leadership of the New York police is trying to downplay their meaning, but if the case has received a loud resonance, several bad guys blame it all. This approach, it would seem, is intended to polish the image of the New York Police Department, but it also has insidious flaws. Instead of showing openness to criticism and finding his mission to expose the wrongdoing, he sends the opposite signal: New York Police is a closed society that protects its own interests, ”wrote crime columnist Murray Weiss. 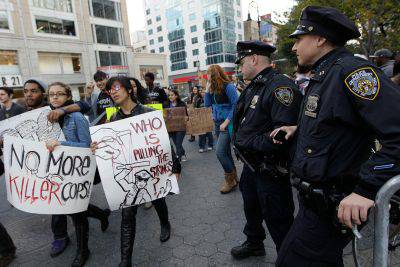 In 2012, organizational crime in the law enforcement agencies of the metropolis has somewhat faded, but the number of “wet cases” involving cops has increased. If in New York City 2011, law enforcement officers shot and killed 11 civilians and injured 28, then the following year the number of victims was 16 and 30, respectively. So, let's say, in February 2012, in a private apartment in the Bronx, cops shot a teenager, in September, an officer “accidentally” shot an employee of a convenience store, mistaking him for a robber, and in October, a policeman killed an unarmed drunk man in Queens in Queens; guard Another incident that occurred in August shook the whole of America: while chasing a criminal, two New York cops wounded ... nine ordinary passersby. Journalists published the results of a ballistic examination: “All nine victims in a dramatic confrontation between the police and an armed criminal near the Empire State Building were injured by bullets fired by two policemen. Craig Matthews shot seven times, Robert Sinistaj nine. ” The result: sixteen shots at the criminal - nine wounded passers-by! The special statement of Mr. Bloomberg, who defended the right of the police to detain armed criminals by any means, noted “high professionalism”, who shot the cops, was very significant in this regard. 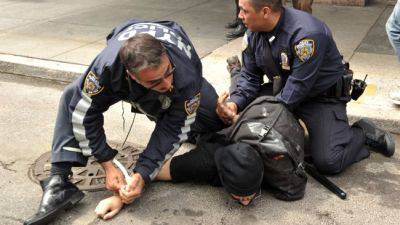 It is worth noting that earlier representatives of several human rights organizations called the police in New York "a violent community whose members rape women and brutally persecute residents of the city." The reason for that was two episodes - the attempt to rape a woman by two policemen and the crackdown of an anti-government demonstration on Wall Street in September of 2011.

Last year, New York police continued to increase public outrage. In May, the cops wounded two passersby, shooting at a “suspicious” unarmed man with a hand in his pocket. In August, they shot and killed a 14-year-old teenager; in September, another public exchange of gunfire was organized in Times Square, with the result that two more women were taken to the hospital with gunshot wounds. At the same time, the suspect himself did not receive a scratch. Moreover, as it turned out later, he didn’t have any weapons at all: making excuses, the police said they “thought” that the man was a threat.

By the way, frames of another October story, which happened, however, in nearby Washington, spread all over the world. A woman who violated the rules of the road in the area of ​​the Capitol, where the United States Congress is located, was fired upon by police officers. She died, and her 18-month-old baby, who remained in the backseat during the shelling, survived only by a miracle.

The cruelty of the American cops then became a topic of wide public discussion, but we will return to New York ... Oddly enough, with the help of the police lawlessness, Bloomberg still achieved his own: today the city of the Big Apple is considered the safest American megalopolis. However, this suggests more that the curve of street crime in the whole country is creeping up even faster. Judge for yourself, because in only one 2012 year in New York, the number of rapes increased by 10,8%, armed attacks on 12,7%, and cases of theft by 11,5%. What then to speak about other American megalopolises if such picture is observed in the safest of them?

Ctrl Enter
Noticed oshЫbku Highlight text and press. Ctrl + Enter
We are
The price of justiceSpy scandals: what foreign intelligence services are looking for in Ukraine
Military Reviewin Yandex News
Military Reviewin Google News
21 comment
Information
Dear reader, to leave comments on the publication, you must sign in.