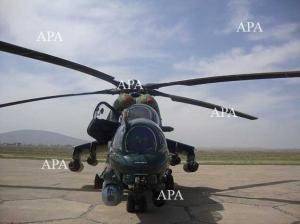 All 24 ordered helicopters delivered to Azerbaijan

According to APA, all 24 Mi-2010М helicopters ordered in September 35 have arrived in Azerbaijan.

Note that the delivery of Mi-35М helicopters ordered by the State Border Service began in December 2011.

Created on the basis of the Mi-24 helicopter, the Mi-35М is intended for the destruction of armored vehicles, fire support units of ground forces, landing and evacuation of the wounded, as well as the transportation of goods. Mi-35M is equipped with modern avionics. The helicopter is armed with a non-removable mobile unit NPPU-24 with a double-barreled gun GSH-23L caliber 23-mm, as well as guided and unguided missiles. The Mi-35M outperforms the Mi-24 in speed and maneuverability, as well as in payload and armament.