January 22 2014
42
On January 20, Russian President V. Putin visited the Tula factory “Shcheglovsky Val”, which is a batch production of the Instrument Engineering Design Bureau (KBP). The head of state was shown the latest developments of Tula designers, from rifle weapons and ammunition to modern anti-aircraft missile systems and advanced developments. Together with a delegation of officials, employees of various mass media visited the plant. The video and photo materials from the event captured various products produced by the Shcheglovsky Val factory. In addition, information about the latest developments has got into the lenses of cameramen and photographers. 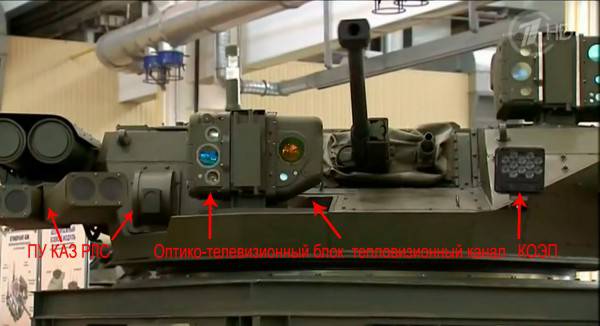 Probable placement of systems on the new layout "boomerang-BM"

Perhaps the most interesting element of the exposition was a stand with information about the new combat module, designed for installation on various armored vehicles. The unmanned Boomerang-BM combat module, as is clear from the information available, is a continuation of a family of similar Tula development systems. Like a number of previous developments in this class, the Boomerang-BM module can be installed on different chassis. On the information stand, captured by journalists, were depicted combat vehicles based on the chassis "Boomerang", "Kurganets-25" and "Armata". All three hypothetical vehicles are equipped with the Boomerang-BM combat module.

Prospective combat module "Boomerang-BM" has one characteristic feature that distinguishes it from other domestic developments of this class. Inside this module are not provided for accommodation crew. The main advantage of this technical solution is the ability to reduce the size of the module, as well as to increase the level of crew protection by placing it inside the body of the combat vehicle.

Armament "Boomeranga-BM" is similar to that used on other combat modules developed by the Instrument Design Bureau. The module is proposed to equip 2X42 30 mm caliber 7,62-mm automatic cannon PKT machine gun, as well as anti-tank missile complex "Cornet". Probably, such a composition of weapons was chosen with the aim of unifying promising combat vehicles armed with the Boomerang-BM module with the existing equipment.

The most interesting feature of the Boomerang-BM combat module is the use of a crewless assembly. Due to the lack of habitable volumes, Tula designers managed to more tightly assemble the internal aggregates of the module and thereby reduce its overall dimensions. In the middle part of the combat module, approximately above the axis of rotation of the tower, it is proposed to place the mechanisms of attachment and vertical guidance of the barrel weapon. On the sides of the breech of the gun and machine gun systems are provided ammunition. As follows from the existing scheme, the supply of projectiles for the gun is on the right side, and the cartridges enter the machine gun on the left. Shops guns and machine guns proposed to be placed in a semicircle along the back wall of the crew compartment. 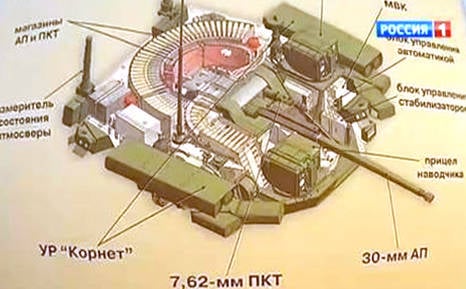 In the combat compartment of the unmanned combat module there is a place to accommodate a relatively large ammunition load. In the boxes of ammunition for the gun you can fit up to 500 shells of several types. Thus, the information stand speaks about the ammunition of a cannon from 160 armor-piercing tracer and 340 high-explosive fragmentation projectiles. In the machine gun shop you can lay up to 2000 cartridges. In addition, launchers on the sides of the combat module allow you to transport and use four guided missiles in transport and launch containers.

The 2X42 automatic cannon allows you to attack targets at a distance of up to 4000 meters (as indicated on the information stand), and Kornet guided missiles, depending on the modification, can destroy equipment or enemy fortifications at a distance of 8 or 10 kilometers. The effective range of the machine gun coupled to the gun does not exceed several hundred meters.

The combat module "Boomerang-BM" is equipped with two blocks of sighting equipment. One of them must be used by the gunner and is located in front of the module, to the right of the gun. The commander unit is located on the left and above the barrel arms. The exact composition of the sighting equipment, for obvious reasons, is unknown. Probably, the crew of the combat vehicle will be able to use a video or thermal imaging channel. The missiles of the Kornet anti-tank complex use laser beam guidance, which indicates the use of appropriate equipment in the combat module.

In the front of the combat module there are some blocks of equipment, the purpose of which remains unknown. It is possible that Boomerang-BM will receive an active protection complex or a system of optical-electronic countermeasures. On the roof of the combat module several communication equipment antennas and an atmospheric state sensor system are provided.

Most of the information about the Boomerang-BM project remains closed to the general public. Nevertheless, even the available information allows to draw some conclusions, even the most general ones.

As mentioned above, the composition of the weapons of a new combat module does not differ from that used in previous systems of this class. Using a combination of 30-mm cannon, machine gun and anti-tank missiles has both advantages and disadvantages. The first can be attributed to the unification with the existing technology, as well as the relatively high characteristics of the weapons used. The lack of an armament complex can be considered the absence of an automatic grenade launcher. In armed conflicts of recent years, weapons systems suitable for the destruction of enemy manpower and light equipment, namely machine guns and automatic grenade launchers, receive special priority. However, in most situations, the weapons mounted on the module can be used with great efficiency.

The perspectives of the new Boomerang-BM combat module are not completely clear. There is reason to believe that it will be used on armored vehicles based on the Boomerang and Kurgan-25 platforms. In addition, some information allows us to consider the new combat module as a kind of transitional link between the techniques of the recent past and the foreseeable future. In the reports on V. Putin’s visit to the Shcheglovsky Val plant, a frame from the presentation “Stages of development of combat modules for armored personnel carriers” was seen. It showed the BMP-2 infantry combat vehicle with the Berehok module, as well as promising tracked infantry fighting vehicles with the Kurganets modules (for some reason it looks like the Boomerang-BM) and Epoch. The first car is related to the 2010 year, the second and the third - to the 2015 and 2020 years, respectively. This means that Russian gunsmiths already have plans for the future associated with the creation of promising combat modules. In light of this information, the new "Boomerang-BM" may be a temporary solution designed to equip new armored vehicles in anticipation of the "Epoch" module. 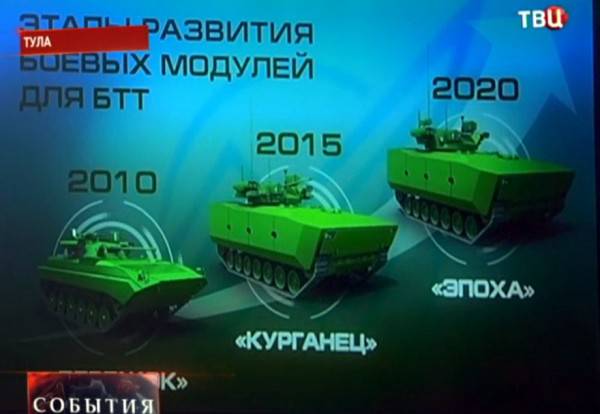 The combat module "Boomerang-BM" is of great interest for professionals and the interested public. However, by itself, this module is not as interesting as the promising armored equipment for which it is intended. The timing of the “premiere demonstration” of armored vehicles “Boomerang” or “Kurganets-25”, as well as their approximate characteristics, are still unknown. The publication of this information, as well as the detailed characteristics of the new combat module, will make it possible to form a complete opinion on the promising technology of the domestic armed forces.