Yevgeny Fyodorov proposes “domesticating” officials and members of their families 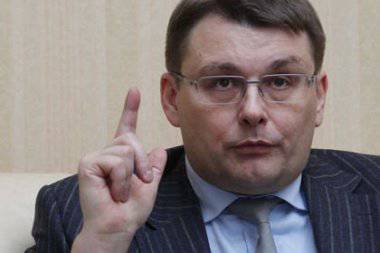 The legislative initiative of the member of the State Duma of United Russia Yevgeny Fyodorov, aimed at taking into account the presence of foreign real estate from close family members of a candidate for a government post or from the candidate, is being actively discussed. This initiative, according to Fedorov himself, is aimed at increasing efficiency in the fight against corruption.


The essence of the deputy’s proposal is as follows: if a person who is going to take one or another post in the civil service has foreign housing, or his close relatives have such housing (as an example, wife (husband) and children), then the door to the said public service for it will turn out to be closed. Yevgeny Fedorov is sure that if a person is going to work in the Russian state apparatus, then he and his family members should use the property exclusively Russian. In addition, the deputy represents the initiative, according to which the children of Russian officials will be prohibited from receiving education outside the Russian Federation. The main argument of the deputy: any official real estate abroad (real estate listed as an official’s family members), as well as education of official children outside Russia - a kind of “alternate aerodrome” (the term of Yevgeny Fedorov himself), which (“aerodrome”) “ "Will allow the official to calmly settle outside of Russia. It is possible to settle, together with the stolen as a result of corrupt activity.

Such a parliamentary initiative, which, in principle, is already working to a certain extent (talking about a ban on political activity in Russia of a person who has foreign real estate or / and accounts in foreign banks) has been identified as supporters and opponents (if not opponents, then at least skeptics).

If you try to heed the arguments of one and the other (as far as possible, of course), this is what comes out.

On the one hand, any initiative that aims to limit the corruption component in relation to the activities of Russian officials is, a priori, worthy of support. After all, if the official himself is listed as a member of any Russian political platform (and even more so than the party), then it is not worthy for such an official to earn money for his “honest people and his beloved wife” somewhere on the Cote d'Azur or send one of their beloved children to study in the US, the UK or elsewhere.

Indeed, if a person decided to get into the public service, then by definition (well, it is, of course, purely hypothetical) he should think not only about personal benefits, but also about the benefits of the people - the servant of the people, after all ... But the question is: who Well we go to the public service to serve the people, stepping over their own interests? If those altruistic unmercenaries go to the bureaucratic “guard”, then after a short period of time they get sucked in by the excitement of enrichment and preparation of those very “spare airfields”.

In this regard, the barrier must be clear: if you are going "to the officials", then be kind - at least you will get real estate in Russia (if you really buy something), and teach your children in Russia. And abroad, no, no! ..

But on the other hand, it doesn’t look that simple. Firstly, any “advanced” servant of the people from the bureaucratic army can always be able to register a mansion in London or a villa in Greece for some great-nephew (if it is impossible for close relatives). When checking, of course, it turns out that the grand-nephew solely with his personal titanic work, being the head of the “super successful” Horn & Co company, a month or two, earned during this time for a villa worth 3 million euros, and his great-uncle - the deputy (deputy minister, governor - underline the necessary) just comes to visit the villa, but to eat stuffed grouse - naturally, not for budget money ...

And there is another option: what if it turns out that a mansion in London is generally the patrimonial nest of the wife of some vice-mayor, who in girlhood, for example, Tudor herself ... She has documents on it for sealing wax, and some Tmutarakan district registry office ... Selling such a mansion would be an extremely serious psychological trauma for Tudor, Claudia Stepanovna. But our fantasies are fading in comparison with the “backed up documents” by the fantasies of our officials ... As an example, Father Evgenia Vasilyeva, who turned out to be an “ordinary” millionaire ...

Secondly, is it really hard for Russian corrupt officials to have if they are barred from buying property for their wives or children abroad? They are at home on the Rublevo-Uspenskoye highway with two or three Moscow or St. Petersburg apartments, with a “dacha” in Adler and a “loped little shed” for half a square somewhere on Seliger will be enough ... After all, how is it here? - if after it became known about the corruption acts of a civil servant, the judicial system would have the opportunity (both under the law and because of its real, rather than ascribed independence) to confiscate property, then the official would be afraid for their “houses”, “ cottages "and" sheds ". And if the confiscation of property for embezzlers cannot in any way prove to be a legislatively fixed norm, then there is nothing to be afraid of this embezzler (both real and potential).

How to deal with the residence of the family official abroad, the ban of which (residence says deputy Fedorov)? Exactly for the reason mentioned above, the absence of the concept of “confiscation of property acquired through corruption” clearly stated in the Criminal Code, as well as the lack of an adequate definition of corruption itself (after all, it’s not only money in envelopes), an official can almost safely transfer his relatives to Russia. Will it be better for Russia and directly for the country's budget? Well, if only from the point of view that official relatives will spend money in Russia, then yes.

The conclusion is this: the idea of ​​Yevgeny Fyodorov is good if it does not close on itself, if it becomes a link in the chain, which in fact will block oxygen for the corrupt. But what link of this chain will be the main one? Perhaps the one described in the two previous paragraphs.

Ctrl Enter
Noticed oshЫbku Highlight text and press. Ctrl + Enter
We are
Family policy of Russia. Without a healthy family there will be no strong stateHousing problem of Russia. Lack of decent housing threatens the social and demographic security of the country
Military Reviewin Yandex News
Military Reviewin Google News
52 comments
Information
Dear reader, to leave comments on the publication, you must sign in.