Latvian passions: from the new premier to the dispatch of soldiers to the Central African Republic

If we look at the numbers, it is no secret to anyone, including the Latvians themselves, that we are a poor country.
If Latvia does not find oil in the near future, then we will not have that kind of money that can be simply distributed for benefits.

January 2014. Oil in the vicinity of Riga, Jurmala or Daugavpils was not found ... Now, in Latvia, another Minister of Welfare ... They will be Uldis Augulis - a member of the Green Union and Peasants Party. Mr. Augulis, it should be noted, already headed the Ministry of Welfare for about a year - from 2009 to 2010 years, but, apparently, his work did not lead to a powerful leap in Latvian welfare. Now, apparently, in Latvia it was considered that there is no point in continuing to “look for oil”, you need to somehow sort out the fulfillment of the social obligations of the state, and for this you have returned the “crisis” Augulis to its former place. A pier, it at it "at an armor" during an economic crisis in the ministry anything especial did not quit, and now, when Latvia all already from head to toe in euro, all precisely will turn out. And we are also talking about the fact that in our country ministers are rearranged from place to place, for there is simply no one to replace these bright heads in the 143 millionth country ... Well, it turns out that there are people who at least once tasted the ministerial fruit worth their weight in gold - in 2 million Latvia ...

It should be noted that peculiar political changes in Latvia occur a couple of months after Prime Minister Valdis Dombrovskis resigned and dissolved the government. The new government is literally on the bottom of the barrel by a woman with the first and last name of Laimdota Straujuma, which is difficult to pronounce in Russian. And although Mrs. Straujuma has not yet officially elected to the premiership, but having enlisted the support of the president and two parties widely represented in parliament, she has already begun to voice new names (and in some cases, as we have already noticed, not quite new ones) government ministers. 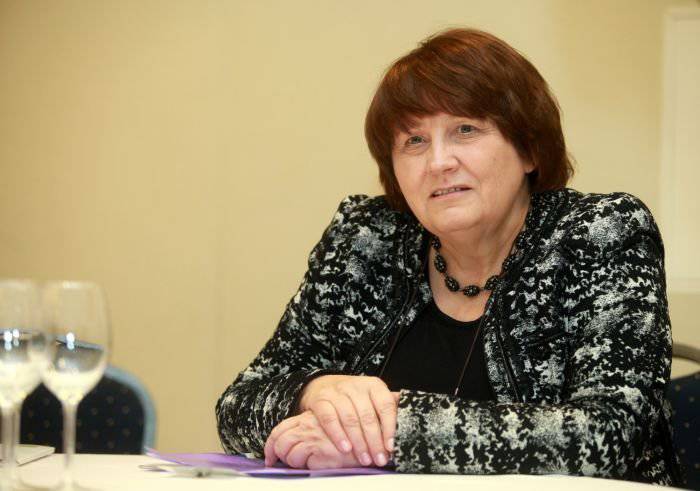 In the meantime, something about the personality of the most likely Latvian prime minister. Mrs. Straujuma will celebrate her 63 anniversary this year. In 1973, she graduated from the University of Latvia (the same university that today is the largest university in Latvia, and which was founded by “predecessors of the hated Soviet invaders” - Latvian government communists in 1919) with a degree in mathematics. After 14 years after receiving a university diploma, she completed postgraduate studies at the Latvian Academy, focusing on the economics of agriculture.
It is noteworthy that when the potential Prime Minister of Latvia finished graduate school (1987 year), the agricultural indicators of the Latvian SSR were among the highest for the entire 20 century (not counting the record numbers of 1973 of the year). Indicators of modern agriculture in Latvia are such that they fully comply with 1993-1994's when the Republic of Latvia tried to figure out how to survive without constant subsidies from Moscow after the collapse of the USSR, hoping to switch to active lending from Europe.

In other words, it turns out that for almost a quarter of a century of independence, at least in agriculture, Latvia has not demonstrated any progress. Has Russia shown them? Unfortunately, the Russian Federation in these indicators Latvia is ahead slightly. But only if Russia with loans from "friends" has long ago "tied up", then Latvia on these loans sits oh how hard. It is sitting in such a way that it is necessary to express its boundless loyalty to Western friends who have decided to get involved in a military conflict in the Central African Republic. AT ministry of defense Latvia noted that they are ready to send to the CAR, quote: "several dozens of Latvian military." And the Latvian military, carrying "freedom" and "democracy" in Central Africa today, well, really not enough ...

Let us return, however, to the premiere at five minutes. From the end of the 90-s begins a long let Limedoty Strauyumy in the government of Latvia. The first place of work is the Latvian Ministry of Agriculture. During 10 years, Mrs. Straujuma conducts her activities precisely on the front of agricultural management in various positions, after which she enters the Ministry of the Environment and Regional Development (and there is also such a wide-profile ministry in Latvia). Without stopping at a new place, Laimdota Straujuma moved to the Ministry of Agriculture in the office of Valdis Dombrovskis. And already in 2,5, by the 63 years, there was a jerk in the premiere.

Now in Latvia, and not only in Latvia, they are wondering why it was Straujuma that was determined by the current president as the main candidate for the premiership. Divination of this kind is related to the fact that this lady in Latvia, until recently, was called one of the most inconspicuous high-ranking officials. She did not have any party affiliation at all and did not allow herself to comment on any foreign relations of Latvia, fully concentrating on her own direction of work.

The premiership with Mrs. Straujuma is special, because in continuing torn towards the West, Latvia was so accepted that any politician necessarily had his “special opinion”, for example, on the issue of Latvia’s relations with Russia. Even some unimportant third adviser to the second deputy ministry of the environment in Latvia, by definition, was guided by the state’s policy, had to learn and repeat one phrase: if something is wrong in Latvia, then Russia is to blame. As an example, you can take the Latvian neighbor, Lithuania, where even psychologists, studying the causes of such a serious problem for the country as an increased number of suicides (reports Delphi), came to the following conclusion: the main reason is the Soviet past ... Do you think a joke? - Not! It turns out that Lithuanian psychologists seriously think so ... Psychosis of psychologists, apparently, is transmitted to politicians ...

Straujuma was out of this, let's say, paradigm. Now, apparently, Straujuma is taught how to behave in the Latvian prime minister's chair. The fact of such training manifested itself after Straujuma unexpectedly for many expressed in the spirit of former prime ministers, stating that in Latvia there is no problem for non-citizens - they say that every non-citizen has the right to "naturalize" at any time. So everyone? So and at any time? Perhaps Mrs. Straujuma did not notice agriculture research in Latvia when, in Latvia’s 2012 year, the authorities found the bill of the same year unconstitutional on the possibility of granting citizenship to any non-citizen of Latvia on the basis of his written request. This is despite the fact that some non-citizens cannot change their status for more than 10 years, and despite the fact that the situation with non-citizens in Latvia is strongly criticized in the Council of Europe and even the UN.

Due to the fact that the next parliamentary elections are to take place in Latvia in the near future, Laimdota Straujuma is considered to be a purely technical prime minister, who, while in her post, will say what people will find on paper and quickly adopted them. her to the party "Unity".
In the upcoming elections for the first time in stories new Latvia for the chair in the parliament will compete "Union of Russian Latvia." The political force known as “FHRUL”, “For human rights in united Latvia”, was transformed into the union. The party is confident that such a rebranding will help in obtaining a significant number of seats in the new convocation of the Seimas and nominate its premier candidacy. The reason for such confidence of the “Union of Russian Latvia” is that about a third of ethnic Russians live in the country today, and almost 42% of Latvia is Russian-speaking. Latvian political analysts do not share the confidence of the former “zapchelovets”, because they believe that the nationalists of Latvia can turn the word “Russians” into their new name by taking advantage of the specific sentiments of the majority.

In general, the year in Latvia promises to be politically hot. And, perhaps, someone will still be able to find their “political oil” by solving the main problems of the country.

Ctrl Enter
Noticed oshЫbku Highlight text and press. Ctrl + Enter
We are
The poorest country in the world and its civil war. How political and economic conflicts acquired religious contentCAR: imperialism in action
Military Reviewin Yandex News
Military Reviewin Google News
40 comments
Information
Dear reader, to leave comments on the publication, you must sign in.