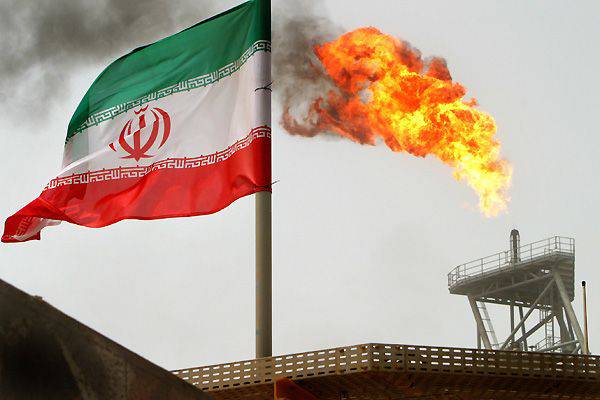 For completeness, it is necessary to list the main trading partners of Russia. Naturally, these are the countries that primarily buy oil and gas.

According to the latest data of the Federal Customs Service, the European Union occupies the most important place in the foreign trade structure of Russia. It is the largest economic partner of the country. The EU's share in January-June, 2013, accounted for 50,1% of Russian trade. The other largest raw material partner of Russia is the APEC countries (24,3%).

So, the lion’s share of Russian exports, according to official statistics, is taken by the export of energy resources (mineral raw materials in the first place). And the tendency to export them only intensified in recent years.

Question: Why does Russia plan to buy crude oil from Iran today, if its first economic task in the world market is to promote its own oil? Without trade in oil and gas, the Russian economy, which has also been drawn into the WTO, will simply fly into the pipe. Trade in raw materials today - the budget.

According to media reports, Russia is going to buy up to 500 thousands of barrels of oil per day from Iran. That's a lot: about 5% of what Russia itself is extracting (about 10 million barrels per day).

The second question immediately arises: the active purchase by Russia, and not only by Russia, of Iranian oil will bring down the price of this very oil on the world market (which is extremely unprofitable for Russia with its 74,9%). Nobody says that prices will collapse to the level of the last years of Yeltsin’s rule (everyone remembers the “default”), but there will definitely be some drop in the stock exchanges.

The press appeared and the answers. Analytical, of course, not from the governments of Russia and Iran.

Someone suggested that it would be beneficial for Russia to change the oil of Iran for its own goods - that is, we are talking about pure barter. The Russian economy, built almost entirely on commodity trading, such a deal would be profitable.

But this version was untenable. Now they write that the contract will provide for the monetary component.

It is possible that the purchase of oil will be organized because of the well-known unpleasant problem associated with the non-delivery of Russia to Iran by the S-300 air defense system. Putin even supposedly gathered in Tehran (at the insistent invitation from there) to finally settle this question.

Another common assumption: the Kremlin is friends with Iran so tightly because it is strong friends with Syria, because Damascus and Tehran are strategic regional partners. In addition, as part of the ongoing Cold War, President Putin is using any lever to weaken an already weak America and reduce its influence.

Oil news appeared in the Western media a week and a half ago. January 10 passed it on ITAR-TASS with reference to Reuters. Source "Reuters" was not named.

But what is this oil for? For whom, more precisely?

She is supposed to go to China.

Who will buy it from Iran, which Russian company?

There is no clarity.

Zarubezhneft does not plan to participate in the exchange program for Iranian oil for Russian goods, a senior company manager told ITAR-TASS.

The press service of LUKoil declined to comment, but a source from the company told ITAR-TASS that the company also has nothing to do with the Russian-Iranian negotiations.

The Ministry of Energy of the Russian Federation, too, was silent.

The media take basic information about the proposed deal from the Kommersant newspaper, specifically from the article by Anna Solodovnikova and Elena Chernenko entitled "Russia can put itself".

According to a Kommersant source in the government of the Russian Federation (also unnamed), Vladimir Putin and Hasan Rouhani agreed to build up economic ties in September in Bishkek. Specific proposals were discussed later - for example, in the framework of the December visit of Russian Foreign Minister Sergei Lavrov to Tehran. One of the approved initiatives was the idea of ​​supplying Iranian oil to the Russian Federation and Russian goods and equipment to Iran.

The fact that such a deal is being discussed is reported by Reuters (see above). The Kommersant interlocutor in the Russian government clarifies that “we are not talking about simple barter - the deal implies the use of funds”, and “the date of its conclusion does not depend on the lifting of Western sanctions from Iran, since Moscow did not sign under them”.

Thus, cash, and not at all simple barter. Trade, not change!

Not only that, and Washington objects.

A Russian diplomatic source told Kommersant journalists that Moscow intends to continue negotiations with Tehran, despite objections from the United States. Jay Karni warned that an agreement on the purchase of Iranian oil by Russia would contradict the agreements on the Iranian nuclear program between the "six" and Tehran, and the US is "extremely concerned about reports on this topic."

According to a Russian diplomatic source, the American side was told in response that "Russia has the right to buy oil from Iran in any volumes, and Tehran - Russian-made goods."

“Thus, the Russian Federation does not violate any sanctions (Moscow recognizes only UN Security Council sanctions, and considers unilateral Western restrictions illegitimate. - Note of Kommersant) and is not obliged to coordinate such projects with anyone,” the newspaper’s source said. - At one time, we took into account the concerns of a number of countries regarding military-technical cooperation with Iran (by refusing to supply it with C-300. - Kommersant), but this is completely different историяand it doesn’t concern Americans. ”

Americans are afraid that the deal will allow Iran to increase oil exports by 50% and earn 1,5 billion dollars a month from this. Revenues will weaken Iran’s interest in fulfilling nuclear agreements.

The head of the Center for the Study of Modern Iran, Rajab Safarov, whose opinion is brought by journalists, believes that if Russia waits until all sanctions are lifted, Western countries will occupy the Iranian market. Viktor Melnikov, chairman of the Russian-Iranian Business Council at the Chamber of Commerce and Industry of the Russian Federation, says: “Selling Iranian products to Russia, in particular, oil, will provide Tehran with money to pay for Russian exports to Iran - this is a mutually beneficial story. Russia is interested in increasing exports to Iran of a number of commodity groups - ferrous metals, grains, vegetable oil, machinery and innovative business products. " Valery Nesterov from Sberbank Investment Research believes that Russia could send 25 million tons of Iranian oil to the growing Asia-Pacific market. Thus, Russia could strengthen its position in this region.

As for Russian oil companies, the Kommersant article did not add clarity.

We are not yet ready to talk about the prospects of a deal with Iran in our companies. An unnamed source in one of them made it clear that the order to participate in the oil scheme, most likely, "will be sent from above."

Browser Sergey Serebrov (Utro.ru) in relation to the Russian-Iranian transaction is quite critical.

According to the analyst, the current geopolitical impulse of the Russian authorities looks very ambiguous. The benefits of its implementation are illusory, which is not the case for cons.

First, it is doubtful that Hassan Rouhani completely abandoned cooperation with the West in exchange for friendship with Moscow.

Secondly, it is unlikely to consider Iran as a full-fledged strategic ally of Russia in the region. Tehran is clearly set to pursue its own policy.

Thirdly, Tehran will still make a bomb. The journalist writes:

“Immediately after Tehran declares possession of nuclear weapons (and this will happen sooner or later), all the current "successes" of both Russia and the United States will be reduced to zero. Neither side will decide to continue relations with a nuclear Iran. ”

So seriously, in geopolitical and economic terms, it is rather difficult to negotiate with the current Iran.

Russia's decision to start buying Iranian oil can slow down the arrival of Western companies on the local market, but is not able to eliminate it completely.

A very unpleasant consequence of the transaction may be a decrease in world oil prices. Sanctions on Iranian oil kept prices high. But the resumption of its exports to 0,5 million barrels per day can trigger a market decline. For the Russian economy, it will be catastrophic, the journalist writes. In his opinion, in the near future, the United States may also declare the start of its own oil exports. And this alone can lead to a fall in world prices for 5-30%.

As a result, the observer reduces the decision on the future purchase of Iranian oil to a number of other similar steps by the Russian authorities - such as the recent provision of multi-billion loans to Ukraine and Hungary, "when the economic and socio-political interests of the country are sacrificed to immediate geopolitical ambitions."

So, politics - contrary to the economy.

This is confirmed by well-known experts.

Victor Nehezin ("BBC") cites the opinion of Alexander Shumilin, Director of the Center for Analysis of Middle East Conflicts at the Institute of the USA and Canada, RAS.

The expert emphasizes that such a transaction carries exclusively political benefits for Russia:

“The agreement of the“ six ”with Iran on the nuclear issue seems to turn Iran towards the West. Because the Western countries imposed sanctions, and in order to weaken them, Iran needs to turn towards the West. And this turn concerns the relevant Russian strategists. Somehow it can be compensated, Iran can somehow be turned in its direction through this kind of deal. Which, I repeat, is economically unprofitable or completely unprofitable and even defective - there are different assessments. ”

The release of additional 500 thousand barrels per day to the market will cause a drop in oil prices, in which Russia is not interested.

“But there is political expediency in this: to draw Iran to itself, to show the significance of Russia, its special role, its special — positive in general — relations with Iran. There is a reason for that, yes. ”

“There is no direct information. If you eat speculation, then there was information that Iran wants to convert the deal on C-300: to make it an "upgrade" on C-400, something like that. But, apart from C-300 and C-400, Iran is not interested in principle in any Russian armament, it is on self-sustainment. ”

Guessing is endless. The situation can be clarified in the coming days or weeks. Recently, the Iranian Foreign Ministry expressed hope that the Russian president will soon visit Tehran. This was stated at a meeting with Putin by Iranian Foreign Minister Javad Zarif. He recalled that the invitation to visit Tehran was transferred to Putin during the last meeting of the leaders of the two countries.

Observed and commented on Oleg Chuvakin
- especially for topwar.ru
Ctrl Enter
Noticed oshЫbku Highlight text and press. Ctrl + Enter
We are
"Ghost": "Borisych's death did not divide us"20 years after the war in Bosnia 1992-1995: rare photos of the conflict
Military Reviewin Yandex News
Military Reviewin Google News
80 comments
Information
Dear reader, to leave comments on the publication, you must sign in.