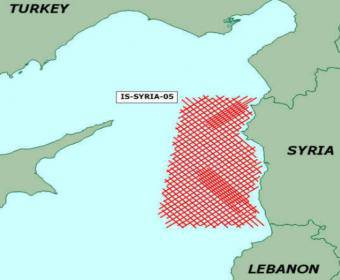 At the end of December 2013, Damascus signed an agreement with the Russian company Soyuzneftegaz on the development of offshore drilling in the territorial waters of Syria. We are talking only about geological exploration, but the Minister of Petroleum Industry of Syria, Suleiman Abbas, clarified that the contract is 25 years old.


Soyuzneftegaz has committed itself to carry out geological exploration, create the infrastructure necessary for the development of a subsea field, and also prepare personnel on site - in the Syrian general center of oil production. In addition, Soyuzneftegaz will assume all costs for these processes (according to preliminary calculations, about $ 90 million). Explorers explore the water area of ​​2190 square kilometers and determine the feasibility of further investments.

Many Western media, starting with a number of major publications, say that exploration work in Syrian territory was limited by the war - and not only that, but was a stopping factor for such people. However, Russian war, apparently, will not scare. Moreover, they, these same Russians (American journalists pour the bile), supply the “regime” of Assad (this cruel “tyrant”, a chemical killer of his own people) weapon and generally support him in every way at the international level. In short, neither Assad’s cruelty, nor violence, nor armed clashes in the region stop Russia. The Kremlin is not even embarrassed by the economic uncertainty of this kind of activity: war is in the country, devastation, and we still need to conduct reconnaissance ... They forget the saying in the West: whoever dares, he ate. Well, it seems that the West is very afraid of the very fighters for democracy, whom he himself recently armed and supplied - all sorts of bearded lice fighting under the “banner of Islam”. Not without reason, the special services of Europe are already consulting the same Assad, awaiting the imminent return of the Islamist militants back to Berlin, Paris and London. Western intelligence agencies in the grave would like to see these Islamists - in the literal sense of the word. As a result, large European companies, such as, for example, ENI (Italy), and then the American Noble Energy, registered in Houston, do not pop their noses in Syria, but cooperate more with Israel or Cyprus. By the way, Western firms stop even before sanctions from the EU and the USA. This factor will not stop Russia.

In fact, Western states are deeply grieved by the Russian raw materials assertiveness in the region. Europe has not yet come to its senses after the collapse of the Nabucco paper project and the collapsed Qatari Gas – Western Europe scenario, and here you are here: Russians are coming.

The Russian-Syrian raw materials transaction was called the Eastern Mediterranean, and European analysts immediately attached a respectful epithet of geostrategic to it. Oil and gas reserves off the coast of Syria in the press are called nothing less than "huge."

David Kashi (ibtimes.com) writes that Russia, like the USSR, is trying to strengthen the sphere of influence in the Eastern Mediterranean: this is the only warm water area to which the Russian fleet has access from the Black Sea. The value of the Eastern Mediterranean lies in the fact that the territory is an excellent natural barrier that impedes NATO’s western invasion (albeit the cold war is over).

The United States is leaving the region, Russia is coming there. This is her chance to strengthen where another geopolitical player has shown weakness. The West, we note, there is nothing left but to snap.

The author quotes from an interview with Nick Burns (Nick Burns), who leads the course of diplomacy and international politics at the John F. Kennedy Institute in Harvard: “The Russian position on Syria is undoubtedly extremely useless and cynical. The Russians closed their eyes on the affairs of Asad, indulged him and helped, not wanting to acknowledge the use of chemical weapons by him. We have a real problem here. The current situation shows the limitations of our ability to work with the Russians. ”

According to the journalist, Syria is one of those Arab countries that are still under the auspices of Russia. And President Putin will do everything possible to maintain his influence there. Russia regards the energy resources of the Eastern Mediterranean as the key to restoring its own regional significance.

It is believed that the Levant shelf of the basin contains considerable reserves of natural gas and oil. The basin extends from the coasts of Israel, Lebanon and Syria in the east to Cyprus in the west and has an average projected oil supply of 1,7 billion barrels, as well as a projected gas supply of 122 trillion. cubic feet Oil and gas give Israel and Cyprus a reason to feel like regional centers of influence. But here is Syria. Another member. And Russia, with which Syria obviously intends to be strategically friendly with all possible means.

The Russian treaty with Syria, David Kashi, is not just a way to invest money profitably. He calls the deal a “far-reaching political maneuver” for the region.

In principle, not only for the region. After discussing a little on the subject of Cyprus and Turkey, the author turns to Western Europe. The Russians have another clear motive for participating in the Eastern Mediterranean raw material “game”: the Moscow-Damascus deal emphasizes the Kremlin’s concern about the decline in natural gas exports to Europe (the author of the material thinks so). However, according to the mentioned Burns, Russia will not be able to "turn back history"(Meaning the so-called" collapse of communism "). Why so? The argument is simple: Russia is not as strong as the USSR.

The journalist does not comment on this argument, but reminds that the Russians are likely to play a significant role in Middle Eastern politics thanks to Bashar Assad: how much the latter will rule Syria will be how much their Kremlin affairs will do with the Syria. The author dares to make a bolder forecast, obviously disagreeing with Burns: Russia will be in the first violins in the Middle East in the next twenty-five years - and just thanks to its fortification in Syria.