Who needs a civil war in Iraq? 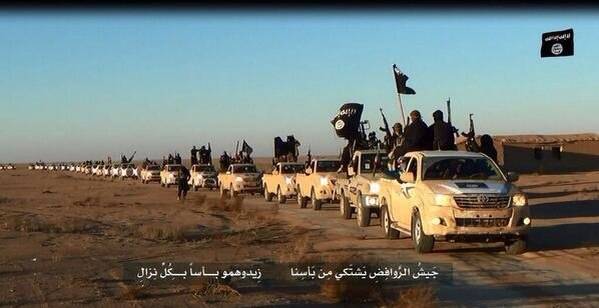 The confrontation in Iraq is gaining new sharpness. If earlier the country was shaken by frequent, but isolated, terrorist acts, now we can speak about the first signs of a full-scale civil war. For several days, militants of the Sunni organization Islamic State of Iraq and the Levant (ISIL), which is one of the incarnations of the omnipresent Al-Qaida, took control of the large city of Falluju in western Iraq ...


In response, the authorities launched an operation that resulted in fierce fighting. Only in the first week, both sides lost to 500 killed and wounded. The Iraqi authorities are also trying to regain control over several areas of the city of Ramadi. Militants seized police stations, released prisoners and seized an army arsenal.

The goal of ISIL is to create a Sunni Islamic state in the neighboring territories of Syria and Iraq, living under Sharia law ... At the same time, jihadists in Iraq are solving the task of creating border corridors with the help of which it will be possible to supply anti-government armed groups in Syria. Militants need a rear structure that provides them weapons, ammunition, ammunition, fuel, food and medicines. Taking control of the western regions of Iraq will allow it to create such a structure.

Who funds the armed Islamists operating in Syria and Iraq? As researchers of this problem point out, Friedrich Schneider, Elisabeth Dreer, Wolfgang Riegler in his book “Money laundering: forms, participants, order of numbers and why politics is powerless” , August 2006), the range of sponsors is quite wide. Al-Qaida funding, according to these researchers, is made up of 30-40% from drug trafficking, 20-30% funds come in the form of donations from individuals and religious organizations, 10-20% from criminal structures, smugglers, 10- 15% of illegal diamond dealers, the rest is from unknown sources.

The total number of al-Qaida sponsors was estimated by the authors at 44 to be thousands of people scattered around the world. The flow of American weapons sent to the conflict zone is paid for by Arab “donors”, who view the Syrian conflict as a step towards a radical “Islamic transformation of the Arab world.” Money to jihadists is received both by electronic transfer and through couriers, often in border settlements such as, for example, in the Turkish Syrian city of Gaziantep. In small towns and villages of Jordan and Turkey along the border with Syria, many small “charitable” institutions have arisen, which are held by Arab “patrons”, shops and outlets are open, where they hire young refugees from Syria, and then make “fighters against regime of Bashar al-Assad.

Last December, a petition appeared on the White House website in Washington, demanding that Barack Obama stop sponsoring terrorist organizations. The petition was posted in the We the People section, stating that the 29 Syrian “rebel” groups are in one way or another connected with the Front al-Nusra, an organization officially recognized by the US State Department as a terrorist. And at the same time, the "Front al-Nusra" is a component of the Syrian opposition, officially receiving assistance from the United States. Given that the rebels in Syria and the rebel Sunnis in Iraq appear to be two parts of one whole, it can be assumed that the American aid to the Syrian opposition is distributed among the “jihad warriors” on both sides of the Syrian-Iraqi border.

Known and the role of Turkey in supporting the armed Islamists. At the end of 2013, a real scandal broke out in Turkey in this connection. It became known that the al-Qaida banker, Saudi Yasin al-Qadi, who was wanted in the United States, was a personal friend of Turkish Prime Minister Recep Tayyip Erdogan. In 2012, he made secret visits to Erdogan at least four times. According to data in the Turkish press, Yasin al-Qadi and Recep Tayyip Erdogan developed an intricate cross-funding scheme to finance terrorists in Syria. In addition, according to French journalist Thierry Maysan, Turkey provides transportation routes for Saudi jihadists with weapons and equipment.

The same circles that set fire to the war in Syria are interested in spreading the war zone to Iraq: the ruling circles of Saudi Arabia and some other countries of the Persian Gulf, bearing the idea of ​​establishing a world caliphate; influential forces in the United States and Europe, trying through the "moderate Islamic opposition" to assert their influence in the region, but in essence fueling terrorism; Turkey seeking regional hegemony.

At the same time, the risks inevitably arising from the spread of the war in Iraq are forcing the United States to adjust its position. The appearance on the adjacent territory of Syria and Iraq of a large enclave controlled by the "jihad warriors" undermines attempts to establish a pro-American regime in this part of the Middle East. Therefore, Secretary of State John Kerry, who was on a visit to Israel the other day, promised to transfer to the Iraqi government high-precision Hellfire missiles and 10 Scan Eagle reconnaissance drones. Possible delivery of other equipment, including fighter aviation.

Following the Americans, the Iranian authorities indicated their position. Tehran declared its readiness to assist Baghdad. This was reported by the FARS agency, referring to the statement by the representative of the General Staff of the Iranian Armed Forces, Muhammad Hijazi.

At the same time, the military-political situation in Iraq looks extremely confusing. In the province of Anbar, it is not only the Islamic State of Iraq and the Levant that is fighting. Iraqi media reported that in Ramadi, Sunni leaders knocked together the Army of Honor and Dignity, which declared war on both the government and the terrorists. A day later, militants appeared in the city with the flags of the Military Council of the province of Anbar, created by Sheikh Ali-Hatem Al-Suleimani, who heads the powerful Sunni clan Dulaim.

Washington analyst of Iraqi origin Kirk Sowell on the site Inside Iraqi Politics notes that some Sunni leaders are demanding the return to power of officials and the military of Saddam Hussein and granting equal rights to the Sunni minority. However, these are the requirements of "moderate". The radicals do not want to be content with less than the overthrow of the government.

Ctrl Enter
Noticed oshЫbku Highlight text and press. Ctrl + Enter
We are
All facets of the Islamic StateInterview by President Bashar Al-Assad to the Sunday Times
Military Reviewin Yandex News
Military Reviewin Google News
23 comments
Information
Dear reader, to leave comments on the publication, you must sign in.