January 21 2014
45
Expansive or, as they are also called, “doom-doom” bullets are special bullets, the design of which provides for a significant increase in their diameter when they enter human soft tissues, which leads to a significant increase in their striking ability and / or decrease in the penetration depth of the bullet. Expansiveness, in fact, is understood to mean the ability of such a bullet to expand, increasing its initial diameter when it enters soft tissues or other soft medium. Currently, the use of such ammunition in the military weapons forbidden, but they are widely used for self-defense and hunting. For example, almost all hunting bullets are now expansive. The use of whole-shell military-style bullets in hunting is considered unacceptable.


For many centuries, soft, non-shell lead bullets of comparatively large caliber have been used with various handguns. When hit in soft tissues, such bullets were flattened, which increased their diameter. At this expense, they effectively transmitted their own energy to the target, inflicting severe enough wounds on people. However, by the end of the 19th century, the situation began to change. In the last quarter of a century, the military around the world began to switch to small-caliber rifled weapons 6,5-8 mm (at that time they were considered small, today belong to normal calibers) and smokeless gunpowder.

At the same time, the soft shellless bullets often did not withstand the pressure that smokeless powder created in the barrel of a weapon, and broke off from the rifling of the barrel. Given this circumstance, the designers were forced to move to the widespread use of bullets, which had a shell made of a more solid metal over the lead core (copper was most often used, brass, nickel silver, tombac or steel were also used). Such bullets went along the barrel rifle very reliably, practically without contaminating it.

It was quickly enough established that the damaging effect of the new bullets and their stopping effect are significantly lower than those of the old shell-free ones. This fact was especially sensitive for the armies, which then took part in the colonial wars, which were waged against the so-called "wild" peoples. For example, during the Chitral 1895 campaign of the year, a strong conviction spread among British soldiers that the new bullets they used were ineffective, and the enemies continue to fight even when they were wounded, because modern shell bullets are not able to deform in the wound channel, which means and effectively transfer your own energy to the target. Often the bullets “pierced” enemies through the body, leaving neat inlet and outlet openings on the body and inflicting deadly damage only when they hit vital organs. 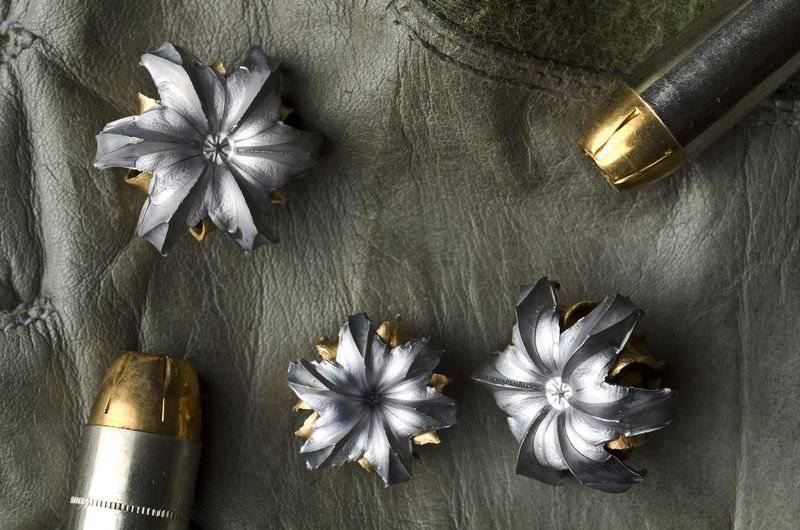 As a result, the leadership of the British army set the task of creating such a bullet that would be able to inflict a wound that was serious enough even to stop the most stubborn fanatic. It is worth noting that many samples of later small arms had a similar effect, for example, the Soviet TT pistol, which had a great penetrating ability, but with little stopping power.

In accordance with a military installation, at the beginning of the 19th century’s 90, a British officer, Captain Neville Bertie-Kleyem, presented new and expansive weapons at one of the British weapons factories located in India (the factory was located in a suburb of Calcutta called Dumdum). bullets to the popular 303 British cartridge. This cartridge was used with Lee-Metford rifles, and later with a Lee-Enfield rifle. Neville created a new bullet by removing copper alloys from the tip of standard Mark II bullets .1 on 303 mm. Such an operation allowed the soft lead core of the bullet to be exposed. New ammunition was widely used by the British army during the Tire campaign of 1897-1898. During the battles, new bullets showed impressive stopping power. Since then, the name "dum-dum" for this type of ammunition has become a household name.

At the same time, contrary to common speculation, the British army did not adopt Ammunition Neville Bertie-Clay. At this time in the UK itself, on the Vulvichsky Arsenal, independent work on the creation of such bullets was in full swing. Here they created shell bullets that had a bare lead core with a cavity inside. Today such bullets designate HP - hollow point, that is, bullets with a cavity located in the nose. These bullets were called Mark III, the British army adopted them in 1897 year, while in the same year they were able to push out an improved version - Mark IV. By this time, the term “dum-dum” has become so widespread that it was used as an unofficial name for all expansive bullets. Therefore, Mark IV began to be called the same, although they were not created at the Arsenal in Dum-Duma, but in Great Britain itself. 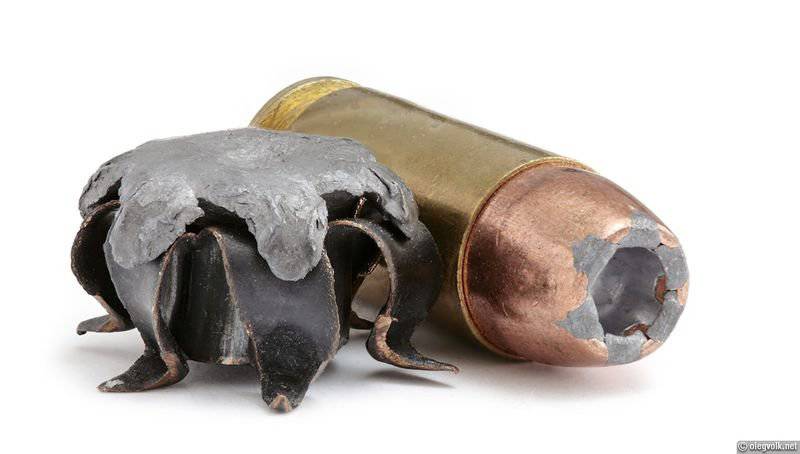 Already in 1899, such bullets were banned from using the Hague Convention, a special, as it was called, “Doom-Duma” declaration, which was approved and signed by 15 states. At the same time, 11 countries refrained from signing it. It should be noted that the reason for the adoption of this declaration was not only humanism, which the military and politicians decided to show. It’s just that such ammunition didn’t allow us to achieve a high speed of the flight of a bullet, which means that the range of their use also decreased. At the same time, when building up a powder charge, a soft lead bullet “dum-dum” falls from the rifling inside the barrel and almost does not rotate, hammering the rifling in lead. Moreover, at this very time, the armies of the world began to arm themselves in large numbers with machine guns and magazine rifles, and it turned out that the expansive bullets had another serious drawback. While the cartridge was being fed from the tape (magazine) into the barrel, it could be deformed, which led to stops and delays in shooting, as well as to the failure of the weapon.

Naturally, the bans imposed did not prevent the belligerent states from using such a powerful means of moral influence on the enemy. In fact, not a single armed conflict of the 20th century was not without their use, although their use was camouflaged at the same time. The adopted Hague Declaration did not apply to hunting and police small arms ammunition. Some samples of these weapons were designed for ammunition, which were in service with the army. For such samples, slightly modified expansive bullets were produced quite easily. Such bullets in different ways and in relatively small quantities could get into the army.

In addition, there have always been army craftsmen who, during a lull at the front (this practice was widespread during a positional war), independently cut down with a file or cut the tops of ordinary bullets. At the same time, such munitions were formally banned and were not accepted by the army, but no case of punishment by the commanders for their use is known. Payback could come only if, after being captured by the enemy, the prisoner was found such ammunition. Such "lucky ones" were usually shot on the spot.

The temptation to possess such a type of ammunition could not avoid the USSR. In the year 1939, a bursting (expansive) bullet DD was recommended for adoption by the Red Army. This bullet consisted of a shell with cuts on the top, a lead core, and a special ballistic tip made of plastic. Production of these bullets was deployed on the basis of the plant number XXUMX. Factory workers were able to master the production of these bullets, but used off-spec plastics for their release, which led to the fact that mass-produced bullets could not pass the tests. 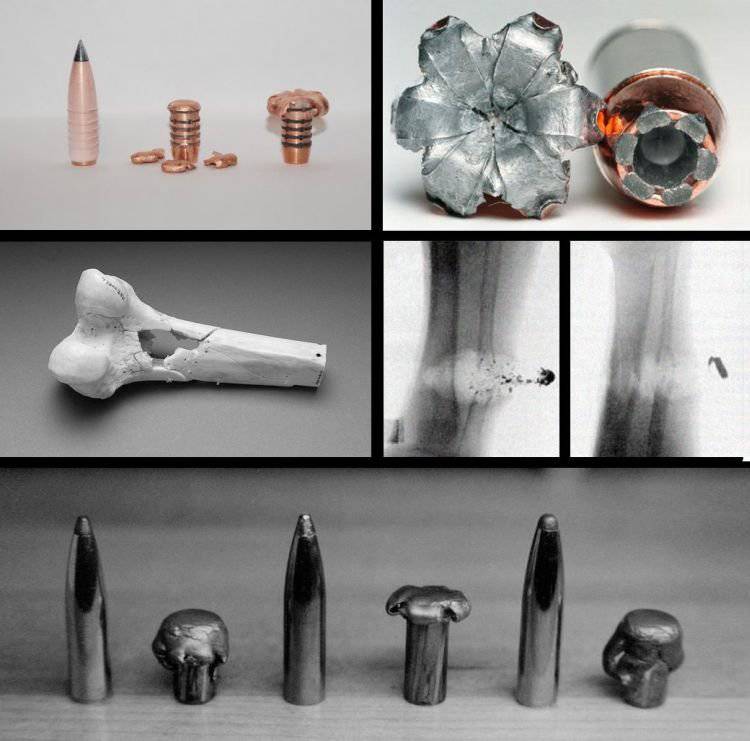 During the war, in the 1942 year, the plant tested the DD bullet of a simplified design that did not have a ballistic tip. Such a bullet did not meet the requirements of peacetime in terms of sensitivity, but given the simplicity of its release and the design as a whole, as well as the satisfactory results on the accuracy of shooting and matching the trajectory with ordinary bullets, DD was approved for adoption.

The DD bullet later became the basis for the creation of a similar ammunition - 7,62-mm assault rifle cartridge 1943 model of the year. This cartridge has received the designation P-44. After carrying out a series of tests for explosive action, the maximum range was established at which the expansive action of the bullet manifested itself, it was 300 meters. At large distances, the P-44 did not deform when a target was hit, acting like a normal bullet. The P-44 bullet was not put into service due to the discrepancy with the desired performance characteristics (explosive effect at a distance of up to 500 meters).

Despite the ban on the use of the military, these bullets have not lost their relevance in the XXI century. They are necessary to solve those problems where the determining factor is the high stopping power of the ammunition, and not the firing range (pistols, hunting rifles). The use of dum-dum bullets in hunting weapons seems to be preferable, since they rarely leave wounded animals (wounded animals that after some time are doomed to death). These qualities have made expansive ammunition very common for police operations and civilian short-barreled weapons. It is important for the policeman to have a high stopping action, which is combined with an extremely low probability of hitting the target, which, in turn, reduces the risk of offending bystanders.

Ctrl Enter
Noticed oshЫbku Highlight text and press. Ctrl + Enter
We are
Knife blade designWeapons for hunting and self-defense of Russians in the Far East and Manchuria at the turn of the 19-20 centuries.
Military Reviewin Yandex News
Military Reviewin Google News
45 comments
Information
Dear reader, to leave comments on the publication, you must sign in.