January 21 2014
4
American troops on the island of Luzon during the Second World War captured eight cars of rather interesting configuration. These were Soukou Sagyou armored engineering vehicles armed with two flamethrowers and an 97 Type machine gun, caliber 7,7 mm. The Americans have not registered cases of use by the Japanese of flamethrowers installed on vehicles against their troops. All captured vehicles were found buried or disguised in a wooded area. Upon closer inspection of the vehicles, it turned out that the hull was manufactured in the 1939 year, but the internal parts (engine, flame throwers) were created a little later - in the 1940-1941 years. This means that the vehicle was originally created for other purposes, but was later converted into a mobile armored flamethrower. 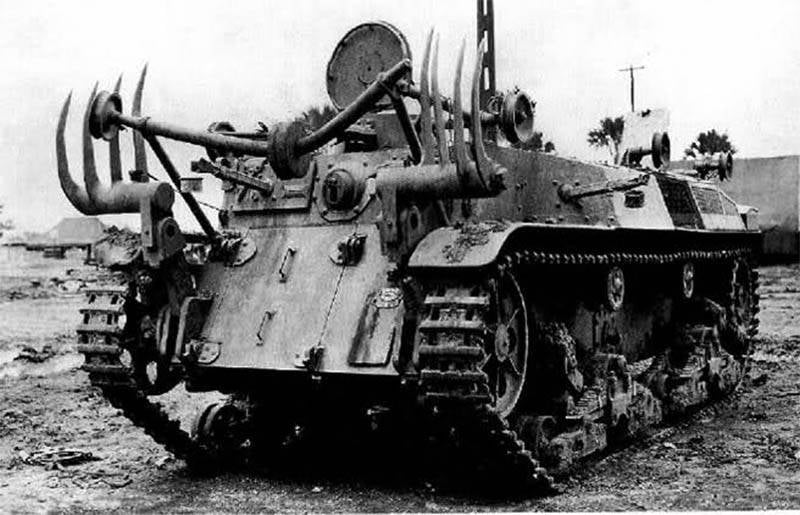 The Japanese army, preparing for war with the Soviet Union, ordered the development of a specialized machine, which was supposed to be used to destroy the defensive positions near the border with Manchuria. The Japanese, as often happens, reacted to this issue unconventionally and added a few more useful, in their opinion, functions. In particular, it was assumed that the future machine will be used for digging trenches, clearing areas, destroying wire fences, disinfecting and dispersing toxic gases, and will also be used as a crane, bridge spreader and flamethrower tank. Thus, the most multifunctional engineering machine should have turned out.

Some sources indicate that the base for the machines of the SS type was the construction of the tank "Type 89". However, the design of the chassis of an armored engineering vehicle Soukou Sagyou only had a similarity to the chassis of this tank. Eight road wheels of the chassis were blocked on trucks in pairs. The carts were attached to the ends of the semi-elliptical springs. The guide wheels were placed in front, behind - gear wheels of tooth gearing. The upper branch of the track was supported by two upper rollers on each side. The single-caterpillar caterpillar, small-caterpillar, consisted of steel tracks.

Soukou Sagyou cars of the first series received a hull, which was almost completely borrowed from the more modern “Type 94”, with developed above caterpillar niches and a characteristic high frontal part. True, in the design of the case there were some changes. A double-wing door was made in the front sheet, and a machine gun was fastened (in the cardan support). A fixed commander dome was installed on the roof. A viewing device was mounted in the dome.

Soukou Sagyou was equipped with a folding plow trawl, as well as a towing device. Power is taken to the winch mechanisms from the engine. The folding track bridge was on the roof, feed was carried out using a roller device.

Since the Soukou Sagyou machines were not supposed to be used in direct combat, the thickness of the armor plates was decided to be reduced. It had the greatest thickness of the hull forehead - 28 mm, the hull and stern sides of the hull - by 13 mm, the bottom and the roof - by 6 mm. As the basis of the power plant served as a diesel 6-cylinder in-line engine Mitsubishi, whose power at 1800 rpm was 145 hp. This power plant allowed the engineering machine to develop speed on the highway up to 37 km / h. 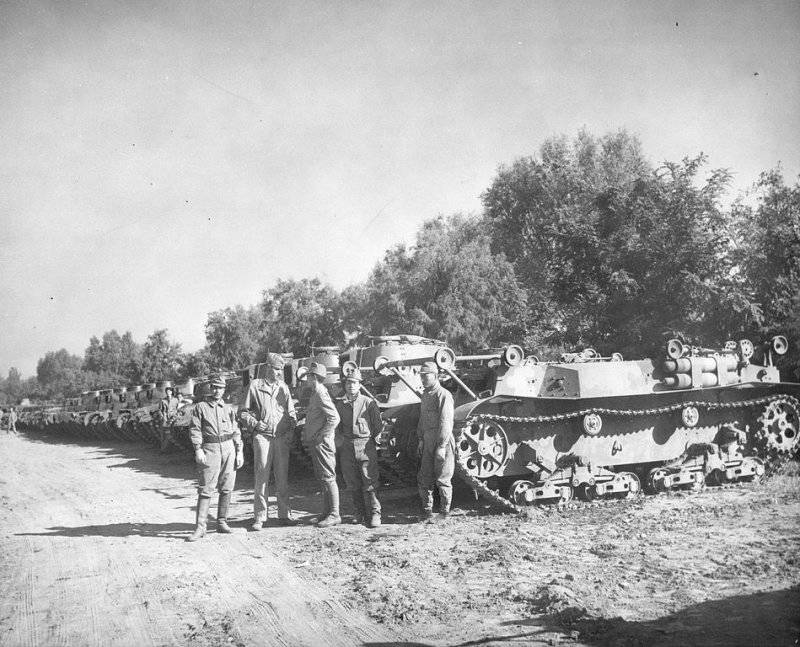 The prototype that arrived in 1931 for testing was cumbersome. The most effective of all the functions were only engineering. However, the Japanese have slightly reinforced the composition of their weapons - now it consisted of two 97 Type machine guns of 7,7 mm caliber and 2-3 flamethrowers.

One of the machine guns was located in the upper part of the frontal armor plate in the center. Another machine gun was placed in a similar mount on the left side of the body. Both machine guns have a horizontal angle of fire at 10 degrees in both directions, a vertical angle of fire - from –5 to + 10 degrees. Although these machine guns made it possible to fire at 500-700 speeds per minute, they did not have a wide range of fire.

Two flamethrowers of an unidentified type were mounted in the hull - one in frontal armor to the right of the machine gun, and the other to the right in the rear armor plate. Some cars of this type were armed with a third flamethrower, located on the left side of the hull in the forward direction. On the other machine there were mounts for five flame throwers, one in front and two on each side. In both types, flamethrowers were installed in flexible mounts, like machine guns. On one of the SS captured by the Americans, the volume of tanks for flame throwers was 504 liters.

Ignition was produced by electric current, probably coming from the engine generator. According to experts, the area affected by the flamethrower was 30-45 meters.

After some thought, the army signed a contract for the supply of a small batch of vehicles, which received the designation SS-Ki. The first four engineering machines Soukou Sagyou entered the disposal of the First Mixed Tank Brigade, which was sent to China. 28 July 1937 of the year in the battle of Beijing, these machines were used as flamethrower tanks, but later they did not participate in open battles, but served exclusively for engineering purposes. Later, Soukou Sagyou as part of an engineering regiment was sent to the Soviet-Manchurian border. Since the use of these engineering machines was generally recognized as successful, the army expressed interest in buying a larger batch of machines. 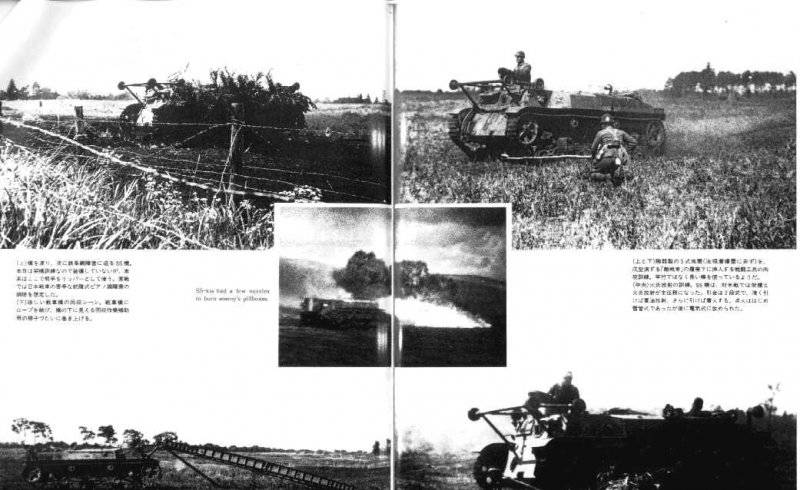 In total, in the period from 1931 to 1943, 98 SS type machines were manufactured in three series. Engineering vehicle was produced in six versions:
SS-Ki - the main modification;
SS Kou Gata - had a modified chassis (4 rollers were installed on each side of the roller);
SS Otsu Gata - bridge laying, having a modified chassis (new driving and steering wheels were introduced, each with three supporting rollers);
SS Hei Gata - trencher with mounted armored screens and running gear from Otsu Gata;
SS Tei Gata - engineering armored vehicle (running gear from Otsu Gata);
SS Bo Gata - bridge laying based on basic modification.

Several dozen SS in December 1941 were transferred to the Philippines, where they were used as part of the Second Tank Regiment (mainly as bridge-laying machines) until the end of the war. Unfortunately, there is no more detailed information about their combat use.