The apparent failure of the Ukrainian opposition 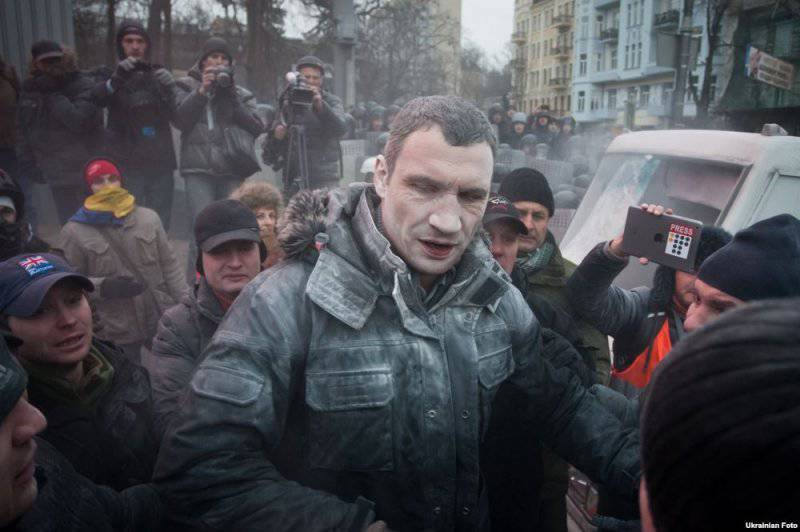 20 January 2014, the media "exploded" reports that the Ukrainian Euromaidan again far from a peaceful rally. As it turned out, events began to develop not according to the scenario of opposition leaders. And instead of demonstrating the strength of national unity, a massacre again occurred on Independence, and there was a split among the opposition.

Opposition leaders wanted to demonstrate that they are quite capable of disrupting the adoption of a new state budget, even though the head of state Yanukovych asked to do this as quickly as possible. The opposition needed at least a little, but a victory so that those people who are still standing on the Maidan would not be disappointed and would not lose hope of the possibility of achieving the intended goals.

It is already obvious that the Maidan is no longer needed by the opposition leaders, because he did not live up to the expectations placed on him. But at the same time, it’s also impossible for the three of the opposition leaders to allow people to disperse, because it will automatically mean a failure in the eyes of the people and will hit the rating a lot. Therefore, attempts were made to block the rostrum and the presidium of the Verkhovna Rada, not to allow the speaker to leave the cabinet.

According to media reports, attempts were made to block the vice speaker, but he still managed to get into the session hall and open a meeting. Then the pro-government factions and the state budget was adopted. And after him a few more bills. When the minority leaders realized that they had lost, they decided to move to more efficient, forceful methods: they began to take cards from the majority of deputies, one of the regionals smashed their heads. However, such actions did not stop the Party of Regions and the Communists, and they switched to manual voting.

Of course, one can argue about the legality of such a vote and the correctness of the counting of votes, but in the current situation, in the opinion of the majority of parliamentarians, just such a vote was most acceptable.

Among the bills reviewed and adopted by 16 in January, it is first necessary to note a bill to simplify the procedure for removing parliamentary immunity. In the event that this law enters into force, almost immediately after the submission of the General Prosecutor’s Office, the issue of lifting parliamentary immunity will be considered directly in plenary session. Thus, the deputy may lose immunity in one day if the majority of deputies vote for it. And this automatically means that if one of the deputies violates the provisions of the Criminal Code, and there are quite a few of these in the Ukrainian opposition, then in a short time, he can change his place of residence and lose his freedom.

Another important bill is the amnesty "Berkut". Its essence boils down to the fact that not only participants of the Maidan, who were detained for organizing mass riots, will be released, but also police officers who beat them. Of course, the authorities could not leave the “Berkutovtsy” to the mercy of fate, because at present they are in dire need of their support. In addition to the amnesty, several other norms were adopted that protect the rights of the power structures. So, in particular, the threat to life or violence against a police officer or members of his family would be a criminal offense punishable by restriction of freedom for a long time.

At the same time, the actions of Euromaidan were significantly limited. So, for example, according to accepted norms, participants of Maidan are forbidden to wear masks or to cover their faces in any other way. In principle, the logic is present in this, because if the action is peaceful, then there is nothing to hide. In addition, the establishment of tents, movement in motorcade more than five cars without the traffic police.

The adoption of these laws became obvious evidence that the authorities were tired of enduring Euromaidan, and they began the process of "tightening the screws." However, it is also obvious that not only Maidan will suffer, but also society as a whole.

After the adoption of the “anti-Maidan” laws in the capital, clashes between the protesters and the “Berkuts” began again. Currently, this confrontation continues, the number of victims has already exceeded a hundred people, some of them are in very serious condition. The protesters divided into two parts. And if January 19 on M. Hrushevsky Street in Kiev, where the main events unfolded, were over thirty thousand people, today part of them moved to Maidan (after the request of W. Klitschko, the leader of the UDAR party). On the street Grushevskogo left about a thousand protesters, but they say that they do not recognize the opposition leaders, so they are not going to return to the Maidan. However, they do not leave attempts to attack the "Berkutovtsy", throwing in them incendiary bottles and stones.

According to official statistics, after 19 January night clashes, around 50 law enforcement officers were hospitalized, they were found to have craniocerebral injuries, bruises, fractures, burns and poisoning with unidentified substances. The activists did not ignore the police transport: they burned four buses and several trucks. Barricades were erected from pieces of the fence, burnt transport and other debris. There is information that the “Berkut” also did not particularly appeal to the protesters. Oppositionists provided data allegedly about the "harassment" of the security forces, which are currently being checked.

At the same time, the prosecution authorities opened criminal proceedings on the fact of organizing mass riots under Article 294 of the Criminal Code of Ukraine. Two dozen participants in the confrontation were detained.

The events that took place in Kiev at the weekend were once again heavily criticized by the American National Security Council. Council Representative in Ukraine, Caitlin Hayden expressed concern about the events taking place in Ukraine. According to her, a similar situation has developed as a result of the fact that the Ukrainian government is not able to meet the “legitimate claims” of its people. The Ukrainian authorities are undermining the foundations of democracy, viewing peaceful protest as a criminal offense. The Council called on the government headed by V. Yanukovych to repeal the "anti-democratic" laws (although it should be noted that most of the adopted norms are successfully used in the leading "democratic" states of Europe), which allegedly served as reasons for the protest, to withdraw from the capital the opposition. Otherwise, Hayden said, the United States is considering the possibility of imposing additional sanctions.

And it seems that the Ukrainian authorities have listened to the advice: according to the latest information, those articles of laws that restrict the rights of people, according to some media, will be abolished. A statement in this context was made by E. Lukash, Minister of Justice of Ukraine. And the head of state ordered A. Klyuev (Secretary of the Security Council) to start creating a working group to resolve the political crisis in the country.

Surveys of the population of Ukraine show that it’s time to do something, because, by and large, it becomes more difficult to control the protesters on the Maidan and the authorities and the opposition. People are embittered by the fact that no one hears them, and that for a long period of time they have been confronting security officials without any obvious results. Hence, the beatings of those who did not like something, obscene messages and obvious provocations of the Berkutovtsy, the swaying of buses and other impartial acts. It’s time to decide what Ukraine really wants ...