By submarine every year? Construction of diesel-electric submarines "Varshavyanka" for the Black Sea Fleet

January 21 2014
40
In September 2011, the Russian Ministry and the United Shipbuilding Corporation signed a contract for the supply of six diesel-electric submarines (DEPLs) of project 636.3 Varshavyanka. As then reported, these submarines will serve as part of the Black Sea fleet, the number of the underwater component of which is poor. Thus, over the coming years it was planned to restore the submarine forces of the Black Sea Fleet through the construction of new submarines. 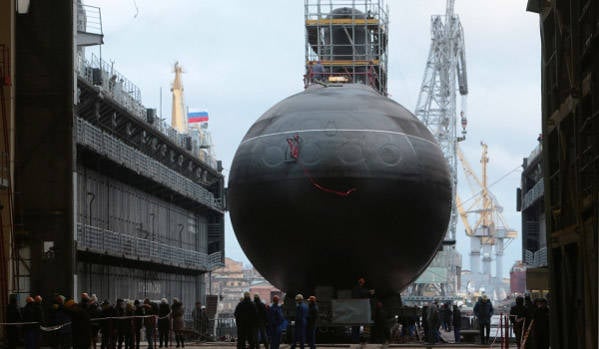 More than two years have passed since the signing of the contract for the supply of six submarines of the 636 project, and the first results can already be expected. According to available data, in the current 2014 year, the first two Varshavyanka diesel-electric submarines can be accepted into the Russian Navy, and the third will be put to the test. These are the submarines B-261 “Novorossiysk”, B-237 “Rostov-on-Don” and B-262 “Old Oskol”. In fact, the implementation of the current order began in the 2010 year, before signing a contract for a series of six submarines. It is easy to calculate that from the start of construction of the head submarine of the 636.3 project for the Russian Navy to its delivery to the fleet, almost four years will pass.

The laying of diesel-electric submarines Novorossiysk took place at the shipyard Admiralty Shipyards (St. Petersburg) on ​​August 20 of the year 2010. Construction began about six months later - at the beginning of the next 2011 year. At the beginning of the 2012, St. Petersburg shipbuilders completed work on a robust hull, and in the spring of next year, work began on connecting submarine units. Finally, in September last year, the Admiralty Shipyards began various works prior to the launch of the submarine. The Novorossiysk diesel-electric submarine was launched on November 28 2013. It is currently being tested. The exact timing of the adoption of the new diesel-electric submarines in the Black Sea Fleet remains unknown. Nevertheless, there is reason to believe that this will take place in the second half of this year.

The second submarine of the 636.3 project being built at the Admiralty Shipyards for the Black Sea Fleet is the Rostov-on-Don B-237 submarine. Bookmark this submarine held on November 21 2011 of the year. It is known that by now St. Petersburg shipbuilders have completed the assembly of the main structures of the new diesel-electric submarines. In the coming months, it is expected to launch and the start of sea trials. In the absence of serious problems, the Rostov-on-Don submarine can pass all the tests before the end of this year and in the last months of 2014, to replenish the combat strength of the Black Sea Fleet. At the same time, however, one should not exclude a less optimistic development of events in which the service of the new submarine will begin only next year.

The third diesel-electric submarines of the 636.3 project for the Russian Navy, B-262 "Stary Oskol" was laid on 17 August 2012. According to reports, work is underway on the assembly of various structures. The exact state of construction of the submarine, for obvious reasons, is unknown, however, the duration of the work and the timing of the appearance of the previous submarines of the project allow us to make some predictions. Apparently, by the end of 2014, the Stary Oskol diesel electric submarine will be launched and put to the test. Thus, her service in the Black Sea Fleet will begin no earlier than 2015 of the year.

The 636.3 project is a further development of the 636 project, which, in turn, was created on the basis of the 877 project. New submarines have a two-body design. The total length of the submarine - 73,8 meters, width - 9,9 m. The surface displacement of the new "Warsawwyanok", according to official data, is 2350 tons. Underwater - 3100 t (according to other data, more than 3900 t). The durable hull provides the submarine with a working depth of 240 meters and a maximum 300 m.

According to the available information, the new submarines are equipped with two diesel generators with an 1500 horsepower, one main rowing electric engine and one economic stroke electric motor. In addition, there are two backup diesel engines and two battery groups. Submarines are equipped with one seven-bladed propeller. These systems provide the submarine sufficiently high running performance. The surface speed of the submarine project 636.3 reaches 17 nodes. Submerged speed - up to 20 nodes. The range of navigation depends on the volume of fuel for diesel engines and the driving mode. So, with an increased fuel reserve at 7 speed, the submarine can go up to 7500 nautical miles. Under water, at an economic speed of a 3 node, the cruising range is reduced to 400 miles.

Armament submarines project 636.3 consists of six torpedo tubes caliber 533 millimeter. The two upper devices can be used as launchers of the Caliber-PL missile system. The volumes of the torpedo compartment allow you to transport up to 18 torpedoes or rockets. The proportion of a weapon in the ammunition should be determined in accordance with the combat mission. The Kalibr-PL missile system can use various types of ammunition with a range of up to 300 kilometers.

A characteristic feature of the submarines of all versions of the 636 project is low noise. In this parameter, the Varshavyanka boats surpass all previous domestic diesel-electric submarines, as well as a number of foreign ones.

The construction of a series of six diesel electric submarines of the 636.3 Varshavyanka project will continue until approximately 2018. Thus, over the next few years, Black Sea sailors will receive literally a submarine a year. Of course, the complexity of the construction program of submarines may affect the final dates, but the completion of the Black Sea Fleet can be considered a resolved issue. The first confirmation of this will appear already this year - when the head submarine B-261 "Novorossiysk" will join the Russian Navy.