North Korean army built on the principles of "Juche" and "Songun" 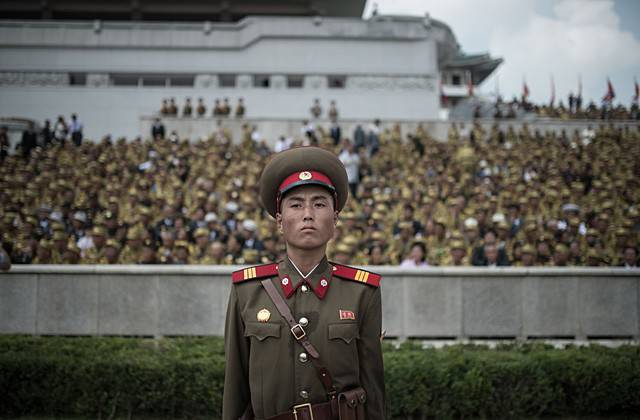 A soldier during a military parade dedicated to the 60 anniversary of the end of the Korean War in Pyongyang. Photo: Ilya Pitalev / RIA News

North Korean forces are fourth in the world; its only allies are Russia and Iran.

It is customary at the same time to scoff at North Korea for the specific features of its regime (and, most importantly, the propaganda of this regime) and present it as something like Mordor, about which nothing is known, but it is very scary. The DPRK, however, is not Mordor, but one of the countries of the world (the features of the regime are the problems of its citizens), and its army is one of the armies, which can be fully described.

Despite the very weak economy and the almost complete international isolation of the DPRK, its armed forces (KPA - Korean Peoples Army) remain one of the largest and strongest in the world. The KPA is built under the slogan “Juche” (“self-reliance”) and “Songun” (“everything for the army”).

During the Cold War, North Korea received military assistance from the USSR and China. Now this assistance has completely stopped: on the part of Russia, because of Pyongyang’s low solvency, on the part of the PRC, because of its extreme dissatisfaction with the policy of the DPRK (although Beijing is officially listed as the main ally and patron of Pyongyang). Practically the only partner of the DPRK in the military sphere is Iran, with whom there is a constant exchange of military technologies.

Pyongyang continues to develop its nuclear missile program and support huge conventional forces. The country has a developed military-industrial complex, capable of producing almost all classes of military equipment: missiles, Tanks, Armored personnel carriers, artillery guns and MLRS, warships, boats and submarines, both on the basis of foreign projects, and their own samples. Only airplanes and helicopters have not been created in the DPRK, although their assembly from foreign components (if any) is possible.

Due to the extreme closeness of North Korea, information about its armed forces, especially about the number of vehicles, is approximate and estimated. Nevertheless, much is known about the Korean People’s Army.

It is doubtful that in the foreseeable future, the North Korean military-industrial complex will be able to create nuclear combat units (warheads) for its missiles - this is an extremely complex engineering task due to stringent requirements for the weight and dimensions of warheads and resistance to overloads.

The special operations forces of the KPA are at least fourth in the world in size (after the USA, China and Russia), and perhaps even the second after the US, their number is up to 90 thousand people. They are led by the North Korean Special Operations Forces, the Light Infantry Management Bureau and the General Staff Intelligence Directorate. 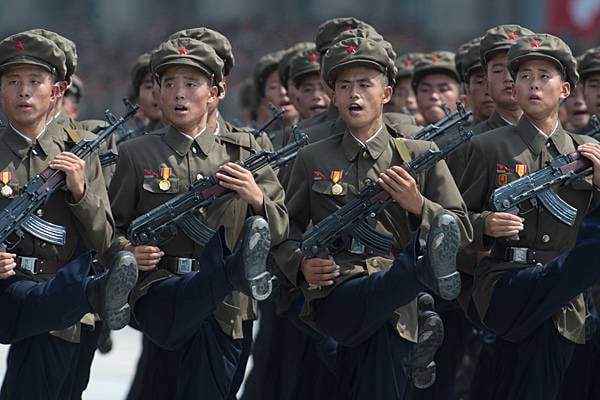 The third echelon provides the defense of Pyongyang, is a reserve and training base for the first two echelons. It includes five infantry (3, 6, 7, 12, 91 of the capital) and one artillery corps. They include one motorized infantry and 15 infantry divisions (including eight training reserve) and 24 brigades - four motorized infantry, one light infantry, two tank, 10 artillery, seven rocket artillery.

The fourth echelon is located along the border of the DPRK with the PRC and Russia. It is, like the third, educational reserve, as well as the "echelon of the last hope." It includes two mechanized (108, 425) and four infantry (8, 9, 10, 11) corps. They include 10 infantry divisions (including 4 training and reserve) and 19 brigades - 10 mechanized, two light infantry, one tank, one artillery, two self-propelled artillery and three reactive artillery.

The zone of responsibility of the 9 Infantry Corps, which consists of six infantry divisions (including four training reserve ones) and a reactive artillery brigade, adjoins the Russian border.

Tanks and artillery - the basis of fire barrier

On their basis in the DPRK a family of Chonma tanks was created (a total of at least 1 thousands of units). The most modern North Korean tank is the “Songun-915”, better known in the West and in Russia under the name “Pokpun-ho”. It is also based on the T-62, but using the technologies of more modern Soviet tanks T-72 and T-80. Carries the 125-mm cannon, the KPVT 14,5-mm machine gun (the KPA in general is very fond of this very powerful machine gun), paired by the Balso-3 anti-tank missile system (a copy of the Soviet Kornet ATGM) and the Hva Son Chon anti-aircraft missile system (a copy of the “Needles -1 "), no other tank in the world has such a set of weapons. To date, the release of 200-300 tanks "Songun-915". 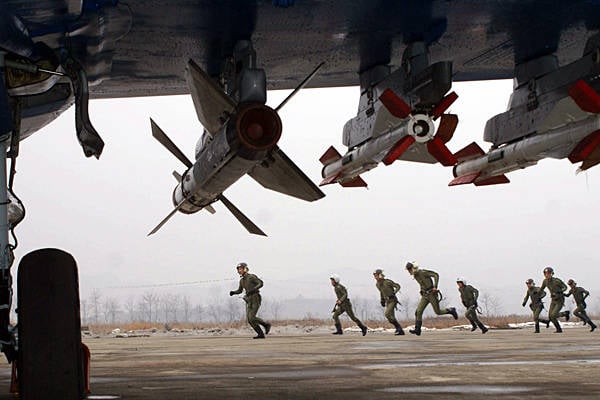 During the military exercises of the Air Force of the Korean People’s Army. Photo: EPA / ITAR-TASS

The KPA is armed with up to 4,4 thousands of self-propelled guns, up to 3,5 thousands of towed guns, up to 7,5 thousands of mortars and about five thousand MLRS. Of particular note is the Juche-po M-1973 / 83 (170 mm) guns. They have a range of 40 — 60 kilometers and can fire at Seoul from the territory of the DPRK itself.

By the number of almost all classes of equipment, the KPA ground forces occupy at least 4-th place in the world. Such a huge amount of it largely compensates for its archaic nature. This applies particularly to artillery, the number of trunks of which the KPA is in second place in the world after the PLA. North Korean artillery is capable of creating a real “sea of ​​fire” in the frontal zone, but it is impossible to physically suppress such amount of artillery.

Aviation - auxiliary branch of the troops

DPRK air forces are armed with from 600 to 700 combat aircraft.

There are from 20 to 24 combat helicopters Mi-24D and about 300 transport and multipurpose helicopters. Among the latter, 87 American MD-500, which the DPRK was able to acquire at the end of 80-s through several intermediaries, should be noted. They are actively used in the interests of the SSO.

Almost all the equipment of the KPA Air Force and Air Defense is extremely outdated, even the Su-25, MiG-29 and KN-06 can be considered new only very relatively. To a certain extent, this is compensated for by their large number, but in this case the quantity factor is of much less importance than for the ground forces. However, the actions of aviation of any enemy over the DPRK at low altitudes will be extremely difficult due to mountainous terrain and a huge number of MANPADS and anti-aircraft guns in North Korean air defense. Old aircraft may well be used as kamikazes, including those with nuclear weapons.

The naval forces of the DPRK are divided into Western and Eastern fleets. For geopolitical reasons, the exchange of ships between fleets is impossible even in peacetime, so each fleet relies on its shipbuilding base.

In terms of the number of combat units, the DPRK Navy may be the largest in the world, but almost all of these units are extremely primitive. In particular, the North Korean ships and boats do not have air defense systems at all. However, for actions in the coastal waters of the North Korean Navy have very significant potential. Their strongest side is the presence of a large number of small submarines capable of planting special forces groups on the enemy’s coast and acting against enemy ships in shallow water. During regular skirmishes between North Korean and South Korean combat boats, advantage, as a rule, is on the side of the former.

The basis of the submarine fleet consists of old submarines 22 Ave 633 / 033 (Soviet, Chinese and its own construction). It is possible that up to four quite old Soviet submarines of the 613 Ave are preserved. There are 30 — 40 small submarines Sang-O (built according to their own design), 20 ultra-small submarines “Yugo” (Yugoslav project; 10 is still in reserve) and up to 10 “Yono” (Iranian “Gadir” project). 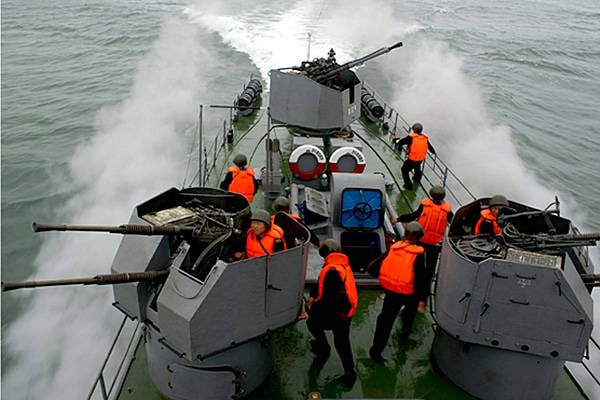 During the military exercises of the Navy of the Korean People’s Army. Photo: EPA / ITAR-TASS

There are at least three patrol ships (frigates) in service, up to 25 corvettes, 34 missile boats (8 of old Soviet Ave 205, 4 of their Chinese analog of Ave 021, 10 of their local analogue of Soju type, six very old Soviet ave. Of 183P, six of their local counterparts like "Sohung").

The DPRK naval forces are practically the only fleet in the world that continues to operate torpedo boats on a large scale (mostly of its own projects). In total there are more than 150, including 100 - on hydrofoils. Patrol boats are about 200 units.

Landing ships and boats are focused on carrying out operations only within the Korean Peninsula itself, so they are small, but there are a lot of them - around 200 “ordinary” ships and boats and 140 airborne assault boats.

Binding of two Koreas is necessary only for Russia

In general, the noticeable technical backwardness of the KPA is largely compensated by a huge amount of weapons, equipment and personnel, a good level of combat training and fanaticism of military personnel. In addition, the KPA is very well adapted to operations in the conditions of the mountainous terrain, which occupies most of the Korean Peninsula (in particular, very many objects of the KPA and the DPRK military industrial complex are deep underground). This makes it the most dangerous opponent, even for the three strongest armies in the world (American, Chinese, Russian) and completely invincible for all the rest.

Therefore, it is completely absurd to talk about how the United States, if they want it, will easily and quickly crush the DPRK. Of course, they can do it, but only when they are bleeding literally in their ears, no high-precision weapon will be a panacea in this case. Americans do not need such “happiness” at all.

However, it is hardly correct to regard the DPRK as a threat to Russia. It’s not even the fact that the length of the Russian-North Korean border is only four kilometers, it’s extremely difficult to “push through” to any significant military groupings (which, however, simply do not exist on this border). The fact is that for Pyongyang, aggression against Russia is absolutely meaningless, because it will not bring "no good but harm."

The North Korean regime is by no means irrational. He is very concerned about his self-preservation.

In the past few years, he has been carefully courting Russia, hoping to find in it a counterweight to China’s increasingly strangling arms. Objectively, only Russia is interested in the peaceful unification of the two Koreas, which, in fact, Pyongyang wants most of all. And only Moscow can objectively become an “honest broker” in this matter.

The unification of the Koreas is completely unnecessary for Washington, Beijing and Tokyo; they are satisfied with the current situation of their tough confrontation. Alas, Moscow is not trying to act in its own interests, but obediently swims in the wake of Beijing, whose goal is to disarm the DPRK and transform it into its full puppet (now it is by no means such).

Ctrl Enter
Noticed oshЫbku Highlight text and press. Ctrl + Enter
We are
Morning freshness with a nuclear flavorThe importance of the Victory Parade in Russia is being questioned
Military Reviewin Yandex News
Military Reviewin Google News
46 comments
Information
Dear reader, to leave comments on the publication, you must sign in.