US trying to wreck Geneva-2 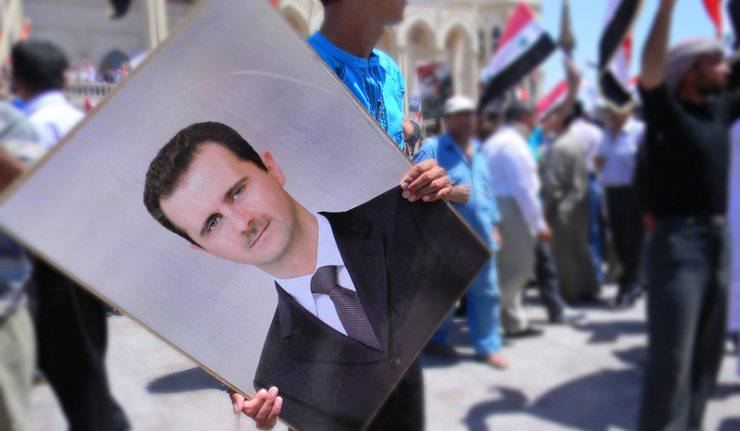 ATS President Bashar Al-Assad received the Russian delegation. During the meeting, he proposed to form an international coalition to combat terrorism, as well as a coalition of Muslim countries to oppose radical ideologies such as Wahhabism. He stressed that extremist ideas pose a threat not only to Syria and the Middle East region, but to the whole world. The head of state urged to consolidate efforts to give "a resolute rebuff to Islamist movements that spread religious intolerance in the form of takfirism and Wahhabism."

The President noted that the people of the SAR are confronted with terrorism and external interference. According to him, pressure is being put on Syria, as well as on Russia and China. Such is the nature of imperialism: the West has always had problems with those countries that are upholding their independence, be they big or small.

Bashar Al-Assad thanked Russia for providing humanitarian assistance to the Syrians and for an honest position on the Syrian crisis. He said that only its people should decide who would be the president of Syria. If the “opposition” wants to fight for the presidency, then it needs to nominate its candidate in the elections.

After the meeting, a deputy from the Communist Party faction, Alexander Yushchenko, who is part of the delegation, was informed by the representatives of Russia who offered to become international observers at the upcoming election of the president of the SAR.

The delegates presented the president of friendly Syria with several souvenirs: a small glass building of the State Duma, an image of Marshal Zhukov and an order for the 70 anniversary of the victory in the Battle of Stalingrad, which is especially symbolic against the background of what is happening in the country, which is fighting not only with terrorism, but also with a new sinister power that emerged at the global level and is quite comparable in its cruelty and cynicism with Hitler's fascism.

In addition, representatives of Russia met with the chairman of the Syrian People's Council of Syria Syria Muhammad Jihad Al-Lyahham and Deputy Foreign Minister Faisal Al-Mekdad, and also visited the wounded soldiers in the hospital named after Syrian hero Yusef Al-Azme.
In the meantime, the United States is still making efforts to actually disrupt the Geneva-2 conference.

So, on the night of January 20, it became known that the UN Secretary General sent an invitation to this international enterprise to representatives of 10 countries, including Iran. Before that, he held meetings and telephone conversations with the leadership of these countries.

“Following these talks, I decided to send some additional meeting invitations to Montreux. Among them are Australia, Bahrain, Belgium, Greece, the Vatican, Luxembourg, Mexico, the Netherlands, the Republic of Korea and Iran, ”the UN Secretary General said, adding that an expanded international presence would be important and useful in supporting the hard work ahead in Geneva.

However, immediately following this statement, Ban Ki-moon was followed by a negative reaction from Washington and his puppets from the so-called "National Coalition of Opposition and Revolutionary Forces", which in Syria is called nothing less than the "Qatar coalition."

State Department spokeswoman Jennifer Psaki said that Iran must first confirm its recognition of the Geneva communique of 30 June 2012 of the year, otherwise his invitation "must be canceled."

But, speaking of the invitation of Iran, Ban Ki-moon said that intensive consultations were held between him and Iranian Foreign Minister Mohammad Javad Zarif, during which Zarif confirmed the respect of the Geneva communiqué and assured that Tehran would play a positive and constructive role in the negotiations.

But this seems insufficient to the US Department of State: it requires some exceptional conditions for Iran, which are not put before any other country. Even before Saudi Arabia, which didn’t really trample this document with its feet in the literal sense. Nor would the United States themselves pass the test of respect for the Geneva communique.

Following the statement, Psaki somehow too quickly and synchronously was followed by a statement from the notorious “Qatari coalition”, which stated that it would not participate in the conference if the invitation to Iran was not canceled. But only on the eve of the members of this very "coalition" assured that they will defend the "interests of the people of Syria and the revolution"! What is the value of their “revolution” if they are openly afraid to defend its “ideals” in the presence of Iran! Or will the head of the Iranian Foreign Ministry “out of their heads’ gaze ”throw all the“ revolutionary ”sentiments out of their heads?

Another information provocation was launched before the convening of the “Geneva-2”. The media reported that the structure representing the internal opposition, the “National Coordinating Committee” headed by Hassan Abdel-Azim, allegedly refused to participate in an international forum. However, Abdel-Azim himself stated that this message was untrue - he only proposed to postpone it for several days. “But we do not boycott this initiative, we fully support it, we just need a little more time,” he stressed.

In addition, in the days preceding the international conference, two formidable statements were made at once that do not contribute to its success, but rather are frank provocations.

One of them was voiced by French President Francois Hollande. At a press conference, he said that his country could single-handedly bomb Syria. But for the time being, Mr. Hollande has been winning dubious “victories” only on the “amorous front”. And such a boastful and undiplomatic attack on Syria is reminiscent of the behavior of Bill Clinton, who brazenly and unceremoniously reached Yugoslavia to divert attention from the sex scandal. But, unlike the American “sex-player”, Hollande can only make pugnacious statements, because times are not the same, and Russia's position on Syria is better for the better than the position of the Russian Federation, which left Yugoslavia to the mercy of fate. And, especially, the times when Syria was a colony of France have passed. Now, rather, France itself will soon become a US semi-colony.

The second blatant anti-Syrian statement was made by US Secretary of State John Kerry. He said literally the following: "No political decision is possible if Assad is not going to discuss the transfer of power and if he thinks that he will play a role in the future of the country ... There will be at least an underground, and in the worst scenario it will be a civil war."

The statement sounds like an attempt to prejudge the decisions of the "Geneva-2", to set some preconditions, in the event of a rejection of which Washington will continue to assimilate the terrorist underground. Such speeches are absolutely unacceptable from any point of view; they even try to deprive the very meaning of the international conference. But neither Kerry, nor anyone else in Washington, Paris or Riyadh, has the slightest right to determine who will play a role in the future of Syria, and who will not. This can only be determined by the Syrian people themselves - by direct will.

It would be logical to raise the question of elections, of international control over voting, of the mechanisms of the electoral process, but in no way that the Syrian citizen allegedly does not have the right to stand for election. No one country in the world can dictate such conditions. And how would the United States react if someone from the outside said that Obama has no right to run for the presidency?

If we are talking about a fair fight, then the “oppositionists” should nominate their candidate for the upcoming elections. But Kerry’s provocative statement says only one thing: both Washington and his puppets from the anti-Syrian “opposition” shamefully fear fair struggle, and even the Geneva-2 conference, therefore they are trying to wreck it or at least “castrate” .

Ctrl Enter
Noticed oshЫbku Highlight text and press. Ctrl + Enter
We are
History of the Bulgarian Air Force. Part of 3. Postwar period and modernityBashar al-Assad: In Syria, not the “revolution” that the enemies are talking about, but the revolution of the army and the people against terrorists
Military Reviewin Yandex News
Military Reviewin Google News
23 comments
Information
Dear reader, to leave comments on the publication, you must sign in.