March 24 2011
2
By the beginning of the First World War, all powers had their goals and objectives, that is, what they wanted to receive as a result of the war.

The Austrian military elite and the bankers of Vienna wanted to seize Serbian lands after Bosnia and Herzegovina.

In Paris, they dreamed of returning the Alsace and Lorraine captured by Prussia in 1871, to take revenge for the shameful defeat in the Franco-Prussian war.

London wanted to preserve its colonial empire, crush a strong industrial competitor - Germany. Prevent the creation of a strong German military fleet. German battleships had better artillery, armor and survivability than the English, and the fleets of Germany and Britain were to be equal in the number of main combat units in 1918-1920.

In Berlin, they dreamed of giving a lesson to the French military, and wanted to get a part of the British and French colonies, to become the first power of the world, breaking the "ridge" of England and solving the "French question" - part of the territory was subject to occupation (north-east).

World backstage planned to crush the German and Russian empires, pitting them together. They prevented the United States from becoming the first power, and the States at that time became the main control center of the planet. They also wanted to utilize the Ottoman and Austro-Hungarian empires, as they had exhausted their tasks. 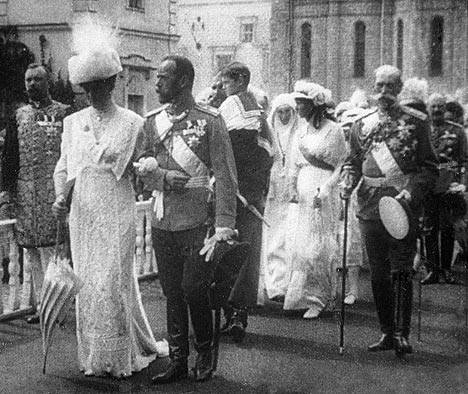 Plans of the Russian elite

Only the Russian Empire did not have a clear plan - why we will fight, why do we need this war. In fact, during this period the Russian “elite” degenerated; it did not possess (in its overwhelming majority) strategic thinking. There was no globalization plan in Russian.

Although the Russian Empire in the previous period were statesmen with a "cosmic" thinking. Emperor Nicholas II did not build a clear program for the development of the empire either in domestic politics or in foreign. In fact, he only reacted to events or made himself influenced by any persons, without even trying to plan something, to build a long-term strategy.

So, France became our ally in 1891-1893. as a result of the decision of Alexander III, who did not give the French to be torn apart by Germany. Although Berlin tried several times to unleash a new war, but Petersburg was "pulling it off". But the “peacemaker” made an alliance with France not only with the aim of stopping Berlin’s aggressive aspirations. The union with France had an anti-British orientation, Russia and France at the end of the 19 century several times found themselves on the brink of war with London.

At the beginning of the 20 century, the Russian-French alliance became obsolete, France violated it, not supporting the Russian Empire in the war with Japan, of which England was an ally, taking the position of cold neutrality. Paris interpreted controversial issues of international law in favor of Tokyo.

After losing the war with Japan, Nikolai entered into an alliance with England, our worst enemy, who had just helped Japan in the war with us. Although Berlin during the war sent clear signals, taking the position of friendly neutrality, he was ready for an alliance. Instead of breaking the alliance with Paris and concluding a strategic alliance with Germany, Petersburg began preparations for a war with the Germans. We didn’t have such contradictions with Berlin as between London and Berlin, Paris and Berlin. Minor customs disputes were resolved within days.

Although the empire was the smartest people who warned the emperor. Back in February, a prominent statesman, former Interior Minister Peter Durnovo, gave Nicholas II an extensive report on 1914. In it, he made a magnificent analysis with far-reaching conclusions. It was emphasized that even a victory over the Germans would not give Russia anything of value: “Poznan? East Prussia? But why do we need these areas, densely populated by Poles, when we are not so easy to cope with Russian Poles? .. ”Galicia? This, Durnovo noted, is a hotbed of dangerous "Little Russian separatism."

At the same time, “the conclusion of a favorable trade agreement with Germany does not at all require a preliminary defeat of Germany.” On the contrary, in the event of such a defeat, "we would lose a valuable market." In addition, Russia would have fallen into "financial bondage" to its creditors, allies. Berlin also does not need war with the Russian Empire; she herself could have torn away from Russia only low-value for her, densely populated areas: Poland and the Ostsee region.

As a result: “Revolutionary speeches will begin in the country ... The army, deprived of the most reliable personnel, covered in the most part by the spontaneously common peasant desire for land, will be too demoralized to serve as a bulwark of law and order. Legislative institutions and oppositional-intellectual parties that are deprived of authority in the eyes of the population will not be able to contain the dispersed popular waves, which they also raised, and Russia will be plunged into a hopeless anarchy, the outcome of which cannot even be foreseen. ”

That is, because of the stupidity of the Russian “elite”, the empire was dragged into a war with a state that was supposed to be our strategic ally, a war that 100% led to ruin and revolutionization of society, gave good chances to Russian freemasons for a coup.

Although all controversial issues with Germany could be resolved purely in the "family circle", the emperor regularly traveled to Germany to his beloved cousin and other German relatives. In 1913, two cruisers were laid for Russia in Germany: the Admiral Nevelsky and the Count Muravyov-Amursky.

But the pressure of London and Paris for part of the Russian capitalists turned out to be stronger and more common sense and kindred bonds. These "allies" promised St. Petersburg to give the Bosphorus and Dardanelles straits, and they themselves agreed to give away in secret.

Failure in preparation for war

Outwardly, everything looked quite good - the largest army on the planet, with fully staffed field artillery (the number of 76-mm field guns was Russian, the troops ranked first in the world, 7112 guns against 5500 from Germany), had an impressive number of airplanes.

But with a lot of problems:

- We were preparing for a war of maneuver, where infantry columns and masses of cavalry would crush the enemy.

- Artillery brigades existed separately from the infantry units, and only in war were divisions attached. The officers who offered to create regimental and battalion artillery were driven from the army, and it happened that they were tried.

- In the Russian-Japanese war, in the defense of Port Arthur, Russian officers and engineers independently invented and created several dozen heavy and light mortars. But this positive experience was "forgotten", in Germany after a few years they began to make mortars and had several hundred barrels for the War. In Russia, even the project of mortars was not.

- The war quickly became positional, it was to our advantage. Since 1825, on the western border of the Russian Empire, three autocrats - Nicholas I, Alexander II and Alexander III - created the most powerful fortification system in the world from the 3 lines of fortresses. The 1 line is the foremost in the Polish kingdom: Modlin, Warsaw and Ivangorod. 2 line - Fortress Dinamünde (from 1893 year - Ust-Dvinsk), Kovno, Osovets, Brest-Litovsk. The 3 line is the rear, the main fortresses are Kiev, Bobruisk and Dinaburg. With the help of the German company Krupp, the best siege and fortress artillery in the world was created in the empire in the 70-80-s of the XIX century.

But after the ascension to the throne of Nicholas II, all work to strengthen the western frontiers (the most dangerous direction for Russia) was stopped.

- Before the reign of Nicholas the Bloody Artillery, the army and navy were made exclusively at Russian state-owned factories — Obukhov, Perm, St. Petersburg guns, and others. But after his accession, Grand Duke Sergei Mikhailovich received artillery in his control. Together with Matilda Kshesinskaya and the boards of the Schneider and Putilov factories, he is organizing a real criminal group.

In fact, for formality, tests at the Krupp, Erhard, Skoda, Vikkers, Obukhovsky and other factories were carried out at the site under the capital. Winners are always Krupp systems. But the winners are always “assigned” to the Schneider system. And when they were not available, then the “grand” prince declared that such an empire's artillery system was not needed. In addition, Schneider determined the Russian company, where they will make guns, of course, he always determined the winner of his accomplices from the Putilov factory. For example, the Perm plant from 1906 to 1914 did not receive an order for a single weapon for a year, although at the cost price Perm products were the cheapest in the empire. As a result, his staff simply went to villages.

- For the war because of this criminal community, the army did not receive a single modern heavy weapon, and during the war they made only about 30 152-mm Schneider guns of the 1910 model of the year.

- The war on the fortresses of western countries (France, Germany, Austria and even Belgium) had hundreds of armor towers with modern artillery systems. And we have one (!) French armored tower in Osovets. Other implements, like those of Peter the Great, were located behind earthen ramparts. In 1915, almost all the fortresses were surrendered without a fight or a few days after the shelling (except Osovets).

- In Russia, there were excellent state (state) plants that made guns, shells and armor in 1,5 – 3 times cheaper than private ones. There were officers who created and proposed projects of heavy weapons, the modernization of fortresses and their connection with fortified systems. But all this was not used, “there was no time” - it is necessary to “light up” with mistresses, go on a hunt, live in Paris or at a resort.

- In 1911, at the suggestion of the “Grand” Prince Sergei, siege (heavy) artillery was abolished, after which only field artillery remained in the Russian army. He promised the emperor to recreate the heavy artillery by 1921 and create new designs by 1930.

- By the February revolution in the empire there was not a single tank and did not plan to release them. Russia actually did not have (2 cannons) railway guns, the French and British had several hundred each.

- The Empire did not produce large-caliber and light machine guns, submachine guns.

- At the start of World War I, the Russian Empire had the largest air fleet in the world, from 263 aircraft. In 1914, Russia and France produced approximately the same number of aircraft and were the first to produce airplanes among the Entente countries, second only to Germany. And then hopelessly lagged behind, not developed industrial base had an effect. Industrialization had to be carried out at the end of 19-beginning of 20 centuries.

Summing up - defeat of the empire in the battles of 1914-1915. and its collapse on the “conscience” of the Russian “elite”, which almost completely degenerated to the rule of Nicholas the Bloody. And there is a personal fault of the emperor, who did not take steps to restore the Russian character of the imperial elite, did not prevent Russia from engaging in a war that was not ours, did not stop the machinations of the “Family” of that time.