January 18 2014
92
In the course of MAKS –2013, cooperation of domestic firms from Roscosmos and Rosatom structures presented an updated transport and energy module (TEM) model with a space-based nuclear power propulsion unit (NPP) of megawatt class (NK 10, 2013, p. 4). This project was presented publicly exactly four years ago, in October 2009 (NK 12, 2009, p. 40). What has changed during this time? 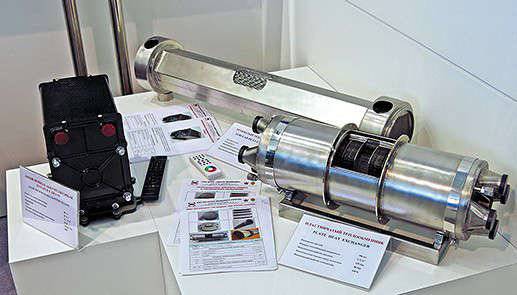 Recall that the goal of the project is to create an energy-based base and, on its basis, new high-energy-equipped space assets for the implementation of ambitious programs for the study and exploration of outer space. These funds make it possible to realize expeditions to deep space, more than 20-fold increase in the economic efficiency of space transportation operations and more than 10-fold increase in electrical power on board the spacecraft.

The nuclear power plant is based on a nuclear reactor with a turbomachine converter of high durability. The development of TEM is carried out by order of the President of Russia from 22 June 2010, No. 419-rp. Its creation is envisaged by the state program "The space activity of Russia on 2013 - 2020 years", and the Presidential program on the modernization of the economy. Works under the contract are financed from the federal budget in the framework of the special program “Implementation of the Commission’s projects under the President of the Russian Federation on modernization and technological development of the Russian economy” *.

For the implementation of this advanced project in the period from 2010 to 2018, more than 17 billion rubles are allocated for the year. The exact distribution of funds is as follows: 7.245 billion rubles are intended for Rosatom State Corporation to develop the reactor, 3.955 billion rubles to the M. Keldysh Research Center for the creation of a nuclear power unit, and about 5.8 billion rubles to RSC Energia for the production of a TEM. The head organization responsible for the development of the nuclear reactor itself is the Research and Design Institute of Energy Technologies (NIKIET), which is part of the Rosatom system. The cooperation also included the Podolsk Scientific-Research Technological Institute, the RRC Kurchatov Institute, the Physics and Power Institute in Obninsk, the Scientific-Research Institute of Scientific-Production Association Luch, the Scientific-Research Institute of Atomic Reactors and a number of other enterprises and organizations. The Keldysh Center, the chemical engineering design bureau and the chemical automation design bureau have done a lot along the working medium circulation contour. The Institute of Electromechanics is connected to the development of the generator.

In the proposed scheme, a nuclear reactor generates electricity: the gas coolant, driven through the core, turns the turbine, it rotates the generator and the compressor, which circulates the working fluid in a closed loop. The substance from the reactor does not go into the environment, that is, radioactive contamination is excluded. Electricity is expended on the work of electric propulsion, which is more economical than chemical analogues in terms of the working fluid consumption in 20. The mass and dimensions of the basic elements of a nuclear power unit should be provided for their placement in the space head parts of the existing and prospective Russian Proton and Angara launch vehicles.

The project chronicle shows its rapid development in modern times. 30 on April 2010, Deputy Director General of the State Atomic Energy Corporation Rosatom, Director of the Directorate for Nuclear Weapons Complex, I. I. Kamenskikh approved the terms of reference for the development of the reactor facility and TEM in the framework of the project “Creating a megawatt class nuclear power unit”. The document was agreed and approved by Roskosmos. 22 June 2010, the Russian President D. A. Medvedev signed an Order on the determination of the sole implementers of the project.

9 February 2011 was held in Moscow on the basis of the Keldysh Center a video conference of enterprises - developers of TEM. It was attended by the head of Roscosmos A. N. Perminov, president and general designer (RSC) “Energy” V. A. Lopota, director of the Keldysh Center A. S. Koroteev, director - general designer of NIKIET ** Yu. G. Dragunov and chief designer of space power plants NIKIET V.P. Smetannikov. Special attention was paid to the need to create a “Resource” stand for testing a reactor installation with an energy conversion unit.

25 April 2011. Roscosmos announced an open competition for the implementation of experimental and design work within the framework of the creation of a nuclear power plant, a multi-functional platform in geostationary orbit and interplanetary spacecraft. According to the results of the competition (the winner of which 25 in May of the same year was NIKIET), a state contract was concluded with a validity period of up to 2015 worth 805 million rubles for the creation of a bench sample installation.

The composition of the bench model of the NPSA should include basic elements of the standard installation, designed to ensure the subsequent creation of installations of different capacities based on the modular principle. The bench sample must generate a predetermined power - thermal and electrical, as well as create thrust impulses characteristic of all stages of the functioning of a nuclear power plant as part of a spacecraft. A high-temperature, gas-cooled fast neutron reactor with a thermal capacity of up to 4 MW was selected for the project.

23 August 2012 a meeting of representatives of Rosatom and Roskosmos was held, dedicated to the organization of work on the creation of a test complex for life tests required for the implementation of the TEM project. It was held at the AP Aleksandrov Scientific-Research Technological Institute in Sosnovy Bor near St. Petersburg, where it is planned to create the specified complex.

Sketch design TEM completed in March this year. The results obtained allowed to go to 2013 in the stage of the detailed design and manufacture of equipment and samples for autonomous testing. Testing and development of coolant technologies began this year at the MIR research reactor at NIIAR (Dimitrovgrad), where a loop was installed to test the helium-xenon coolant at temperatures above 1000 ° С.

The ground-based prototype of the reactor facility is planned to be created by 2015, and by 2018, a reactor installation should be made to complete the NEDD and its tests began in Sosnovy Bor. The first TEM for flight tests may appear by 2020.

The next project meeting was held on 10 on September 2013 in the state corporation Rosatom. Information on the status of work and the main problems during the implementation of the program was presented by NIKIET Head Yu. G. Dragunov. He stressed that at present, the institute's experts have developed the documentation of the technical design of the nuclear power plant, determined the main design solutions and carried out the work in accordance with the project’s roadmap. Following the meeting, the head of Rosatom Corporation S.V. Kiriyenko instructed NIKIET to prepare proposals for optimizing the “road map”.

Some details of the design and features of the project YaEDU were found out during a conversation with representatives of the Keldysh Center at the MAKS - 2013 air show. In particular, the developers reported that the installation will be done immediately in a full-sized version, without making a reduced prototype.

The NRADU has extremely high (for its type) characteristics: with the thermal power of the 4 MW reactor, the electrical power at the generator will be 1 MW, that is, the efficiency will reach 25%, which is considered a very good indicator.

Regarding one of the most interesting decisions being developed within the project (selection of the type of refrigerant emitters of the second circuit), it was answered that both drop and panel heat exchangers are being considered, and so far no choice has been made. On the displayed mockup and posters, a variant with a preferred cooler-emitter was presented. In parallel, work is underway on the panel heat exchanger. Note that the entire TEM design is transformable: at start-up, the module fits under the head fairing PH, and in orbit “spreads its wings” —the rods are moved apart, which carry the reactor, engines and payload over long distances.

The TEM will use a whole bunch of advanced extremely powerful electric propulsion - four “petals” of six sustainer engines with a diameter of 500 mm, plus eight more smaller engines - for roll control and course adjustment. At the MAKS - 2013 salon, a working engine was shown, which is already undergoing testing (while on incomplete thrust, with electric power up to 5 kW). ERE work on xenon. This is the best, but also the most expensive working body. Other options were considered: in particular, metals - lithium and sodium. However, the engines on such a working body are less economical, and it is very difficult to carry out ground tests on such electric propulsion.

The estimated life of a nuclear power plant incorporated in the project is ten years. The resource tests are supposed to be performed directly on the complete installation, and the units are to work autonomously on the bench base of the enterprises of cooperation. In particular, the turbocharger developed at KBHM has already been manufactured and tested in the vacuum chamber of the Keldysh Center. A thermal simulator of the reactor for 1 MW of electrical power was also made.

Ctrl Enter
Noticed oshЫbku Highlight text and press. Ctrl + Enter
We are
Not a single satellite escapes from the “System of Control of Outer Space”State and private space: Russia's competitive opportunities
Military Reviewin Yandex News
Military Reviewin Google News
92 comments
Information
Dear reader, to leave comments on the publication, you must sign in.