January 18 2014
25
Last December, before the “Geneva-2”, the owners and sponsors set the Syrian “opposition” the task - to achieve success on the ground at any cost so that the positions of anti-Syrian forces in the international forum would be strengthened. Bandits- "opposition" spared no effort. But now, with only a few days left before the conference, it is obvious that they have not achieved any success. Their only "victory" during this time was the seizure of the workers' town of Adra in the province of Damascus, but this is a pure Pyrrhic victory. The incredible atrocities that the militants committed in this settlement against civilians, in the information plan, played, rather, just against the "opposition". The more people talk about what happened there, the more the Syrians are angry about those who, under the guise of the slogans of "democracy", shed the blood of innocent citizens ... Here is another episode of the "victory" of terrorists - a group of militants broke into the house to one a resident of Adra, who had two small children. Woman brutally beaten. When she, in a semi-conscious state, asked “Where are my children?”, “The oppositionists” exclaimed “Are these your children? Here are your children, get it! ”. Before her eyes, they cut off their heads and threw them at their mother's feet ...


Currently, the army has already cleared several quarters of Adra, and soon the villains will have to answer for all the severed heads, for all the defiled bodies, for every drop of spilled blood.

In recent days, the Syrian army has achieved great success in the province of Aleppo. A large area of ​​An-Nakkarin was taken under control, battles for which went on for several months. The following localities were liberated - Az-Zarzur, Al-Zubeykh, Al-Majbal, Taana. The army is fighting for the Sheikh-Najjar industrial zone, seeking to block the highway Aleppo-El-Bab, which will deprive the bandits of supply.

In the city of El-Bab, as well as in other settlements of the province of Aleppo, captured by the militants, and in the province of Rakka, armed clashes take place between the “opposition” itself. The two major conflicting groups, the Islamic State of Iraq and the Levant and the Islamic Front, did not share power and influence and began to kill each other.

One can only imagine with horror what would the whole of Syria expect if the so-called “revolution” triumph!

However, terror sponsors are already beginning to realize this. Only politicians openly admit their mistakes can not because of the fear of "losing face." But representatives of the Western special services began to search for contacts with Damascus in order to obtain information about the most dangerous terrorists, including those who went to Syria from Europe. This information, which was first reported by the British television channel BBC, was also confirmed by the Deputy Foreign Minister of Syria, Faisal Al-Mekdad. He pointed out that there are certain contradictions between law enforcement agencies and politicians - when security forces understand the threat posed by terrorists who are operating in Syria today, and may be coming up in European capitals tomorrow, political leaders continue harsh rhetoric regarding Damascus because of their vested interests.

Meanwhile, Iranian foreign ministers Mohammad Javad Zarif and Syria Walid Al-Muallem, after talks in Damascus, flew to Moscow on the same plane. Intensive political consultations are being held between them and Lavrov regarding the settlement of the crisis in the SAR and the convening of the “Geneva-2”. 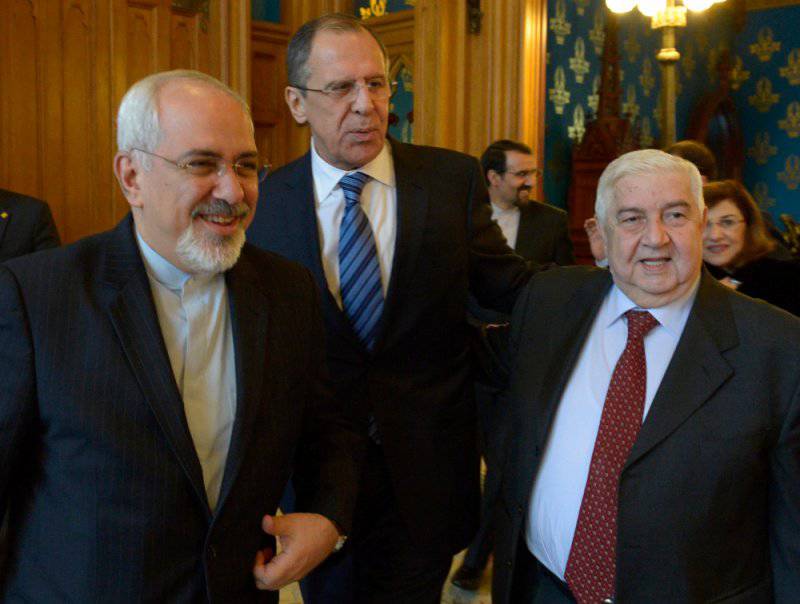 Russia reaffirmed that Iran’s participation in an international conference would be very important. Zarif said that Iran is ready for such participation if it receives an invitation from the UN Secretary General, but Tehran does not accept any preconditions. I recall that US Secretary of State John Kerry put forward such conditions one by one, calls on Iran to send representatives to participate only on the sidelines of the conference, and demands that this country recognize the Geneva communique of 30 June 2012 of the year, although Iranian politicians have no special objections to this document. Yes, Iran, of course, would not have been worth it to declare recognition of the Geneva communique, but he considers any preconditions to be humiliating for him - after all, they are not put before anyone else.

"As for the participation of Iran in the conference: if we are invited, we will take part, if we do not invite, we will not take part," Zarif said.
Lavrov warned the head of the Syrian Foreign Ministry, Walid Al-Muallem, that some forces could undertake provocations in order to disrupt the "Geneva-2".

“At present, attempts are being made to create artificial obstacles in order to disrupt the conference or impede its work. It is all the more important now to exchange views and do everything possible so that these attempts are not crowned with success,” the Russian minister stressed, adding that this requires political will, endurance and ability not to succumb to these provocations.

Al-Muallem answered with a joke: "Anyone who can provoke the Syrian minister will receive a million dollars."

Syria is aware of the danger that forces who don’t want a peaceful resolution of the crisis could disrupt the Geneva Conference. But there were already so many provocations that there was an experience to recognize them and counteract this. In Syria, they hope that this time the conference will be held and will be crowned with success.

Ctrl Enter
Noticed oshЫbku Highlight text and press. Ctrl + Enter
We are
Persons of the present Russia: about those who left their blood forever in the Syrian landSyria: Americans scare themselves, and Asma Asad buys chairs
Military Reviewin Yandex News
Military Reviewin Google News
25 comments
Information
Dear reader, to leave comments on the publication, you must sign in.